The world of app development is fast paced, where app trends come and go. What started as simple and functional apps, have now resulted apps that are more integrated at every step. This has pushed for a change in the way we build our apps, including the tools we use. We are no longer capable of pushing out dynamic and fluid apps without using frameworks! Frameworks are libraries or set of guidelines that simplify the process of building apps by allowing developers to write less code that does more. Front-end frameworks work hand-in-hand with server-side frameworks to ensure a complete functional framework. This Spring plus Angular tutorial will go over basic concepts of Angular 5 including the theory behind it, why it’s useful, the standard file structure, TypeScript, the CLI, components, and so on. Following this, you’ll delve into Spring and learn how to integrate it into your Angular project. When it comes to the Spring framework, you’ll go over how to create your back-end server and get it up and running with Angular. From there you will work on building an actual project from the ground up – A ToDo list application. This will include designing an entire front-end layout with Angular and integrating a back-end system with Spring.

The course has been designed for intermediate developers who are at least familiar with core Java, an idea about the Spring framework and at least basic web development knowledge. 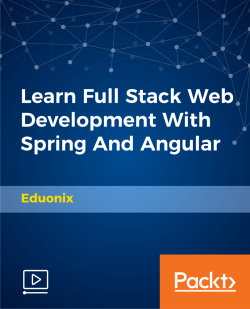