This book takes a unique approach to teach C# to absolute beginners. You’ll learn the basics of the language in seven days. It takes a practical approach to explain the important concepts that build the foundation of the C# programming language.

The book begins by teaching you the basic fundamentals using real-world practical examples and gets you acquainted with C# programming. We cover some important features and nuances of the language in a hands-on way, helping you grasp the concepts in a fluid manner.

Later, you’ll explore the concepts of Object-Oriented Programming (OOP) through a real-world example. Then we dive into advanced-level concepts such as generics and collections, and you’ll get acquainted with objects and LINQ. Towards the end, you’ll build an application that covers all the concepts explained in the book.

By the end of this book, you will have next-level skills and a good knowledge of the fundamentals of C#.

This is Day 01 of our seven day journey to learn C#. Today, we will begin with an introduction of a new world of programming and will discuss all the basic concepts required to learn this programming language. We will also discuss the .NET Framework and the .NET Core framework by covering important concepts of the framework. We will also get a basic understanding of managed and unmanaged code. At the end of the day, we will start with a simple Hello World program.

Today, we will learn the following topics:

There might be various definitions or various thoughts to define the word programming. In my view, programming is writing a solution in such a way that a machine (computer) can understand to depict the solution, which you can identify manually.

For example, let’s say you have a problem statement: find the total count of vowels from this book. If you want to find the solution to this statement, what will you do?

The probable steps for the solution to this problem are as follows:

The preceding steps just described how we reached a perfect solution for our problem statement. These steps showed how we manually found the answer to our problem of counting all the vowels in the book's chapters.

In the programming world, such steps are collectively known as an algorithm.

An algorithm is nothing but a process to solve a problem by defining a set of rules.

In this book, we will use C# 7.0 as the programming language and .NET Core as the framework.

While we are referring to .NET (pronounced as dot NET), it is .NET Full, as we have .NET Core in place and we are using .NET Core in our book examples with C# 7.0 as the language. Before moving ahead, you should know about .NET because there is a .NET Standard available with the .NET Core, that is API servers for both .NET Framework as well .NET Core. So, if you created a project using .NET Standard it is valid for both .NET Framework and .NET Core.

.NET is nothing but a combination of languages, runtime, and libraries, by using which we can develop managed software/applications. The software written in .NET is managed or is in a managed environment. To understand managed, we need to dig into how binary executables are available for operating systems. This comprises three broader steps:

The preceding process is a standard process depicting how compilers compile the source code and create executable binaries, but in the case of .NET, the compiler (C# compiler for our code) does not directly provide a binary executable; it provides an assembly and this assembly consists of metadata and intermediate language code, also known as Microsoft Intermediate Language (MSIL) or Intermediate Language (IL). This MSIL is a high-level language and this can’t be understood directly by the machine, as MSIL is not machine-specific code or byte code. For proper execution, it should be interpreted. This interpretation from MSIL or IL to the machine language happens with the help of JIT. In other words, JIT compiles MSIL, IL into the machine language, also called native code. For more information, refer to https://msdn.microsoft.com/en-us/library/ht8ecch6(v=vs.90).aspx.

In our seven days of learning, we will not focus on the framework, but we will be more focused on the C# language with the use of .NET Core. In the coming sections, we will discuss important things of .NET Core in such a way that while we work with a C# program, we should understand how our program talks with the operating system.

What is .NET Core?

.NET Core is an open source software development framework released under MIT License and maintained by the Microsoft and .NET community on the GitHub (https://github.com/dotnet/core) repository.

Here are some important features of .NET Core, that make .NET Core an important evolution step in software development:

.NET Core is a combination of coreclr, corefx, and cli and roslyn. These are the main components of .NET Core composition.

What is .NET Standard?

The .NET Standard is a set of APIs that resolves the problems of code sharing while you’re trying to write cross-platform applications. Currently, Microsoft is working on .NET Standard 2.0 to make it streamlined, and these standards will be implemented by all, that is, .NET Framework, .NET Core, and Xamarin. With the use of .NET Standard (that is a set of APIs), you are ensuring that your program and class library will be available for all targeted .NET Frameworks and .NET Core. In other words, .NET Standard will replace Portable Class Libraries (PCL). For more information, refer to https://blogs.msdn.microsoft.com/dotnet/2016/09/26/introducing-net-standard/.

The .NET Standard 2.0 repository is available at https://github.com/dotnet/standard.

Till now, you've got an idea of .NET Core and a few other things that help build cross-platform applications. In the coming sections, we will prepare the environment in order to start learning the C# language using Visual Studio 2017 (preferably the community edition).

Available IDEs and editors for C#

Integrated Development Environment (IDE) is nothing but software facilitating the development of applications. On the other hand, editors are basically meant to add/update predefined or new content. When we talk about the C# editor, we are referring to an editor that helps write C# programs. Some editors come with a lot of add-ons or plugins and can compile or run the programs.

We will use Visual Studio 2017 as our preferred C# IDE; however, there are a few more C# IDEs and editors you can go with:

There may be more alternative IDEs and editors, but they are not as important to us.

Setting up the environment

In this section, we will see step by step how to initiate the installation of Visual Studio 2017 (preferably, the community edition) on Windows 10: 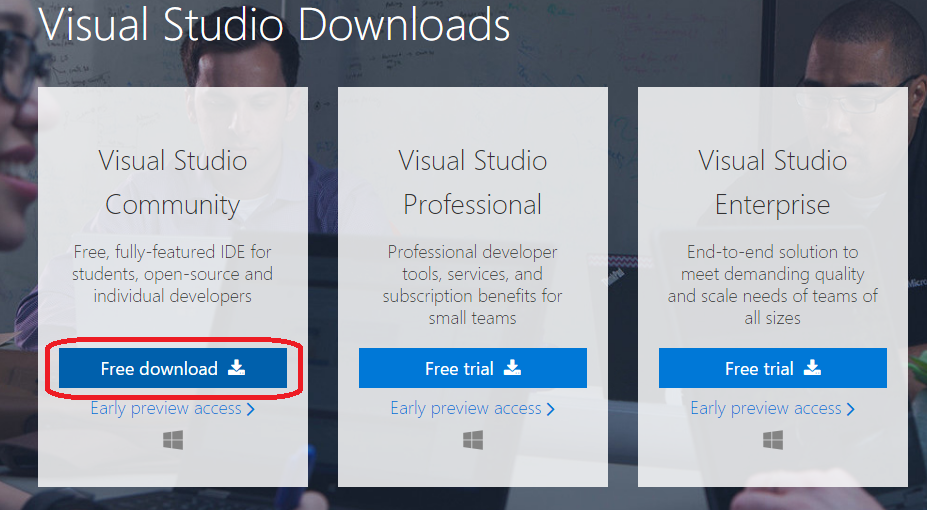 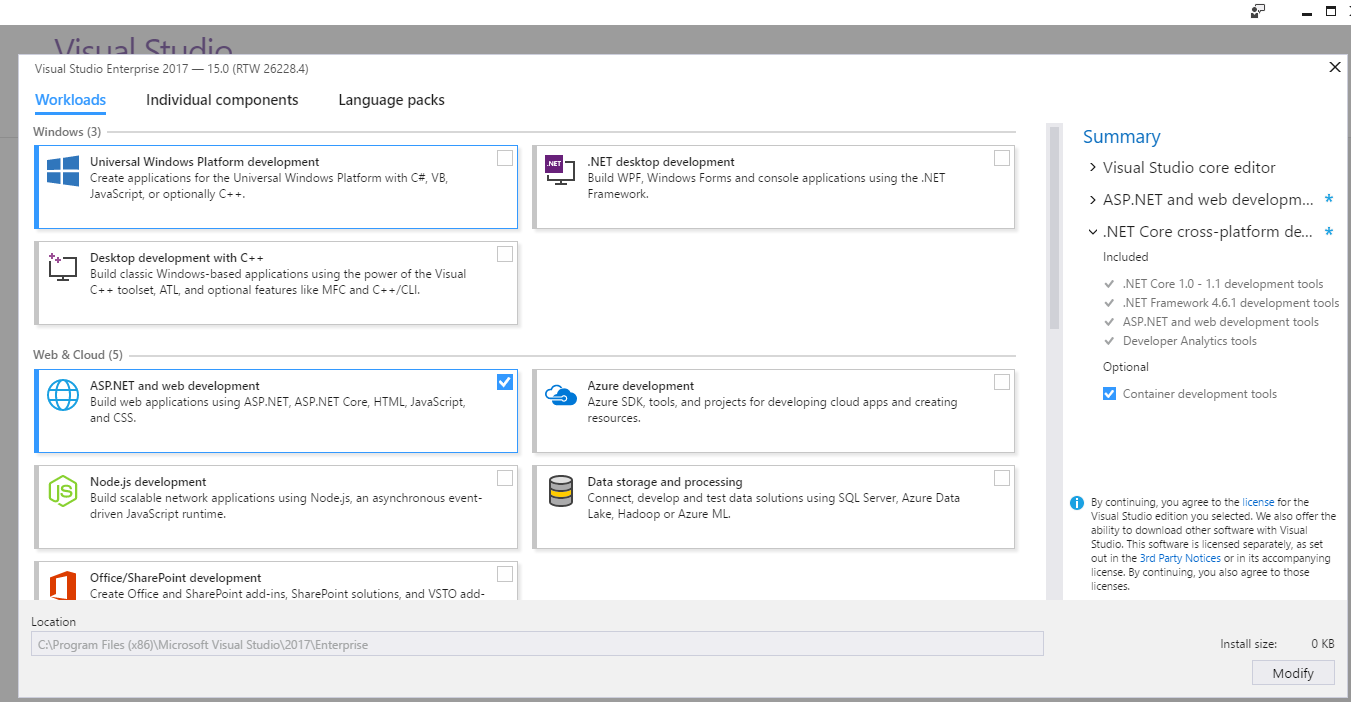 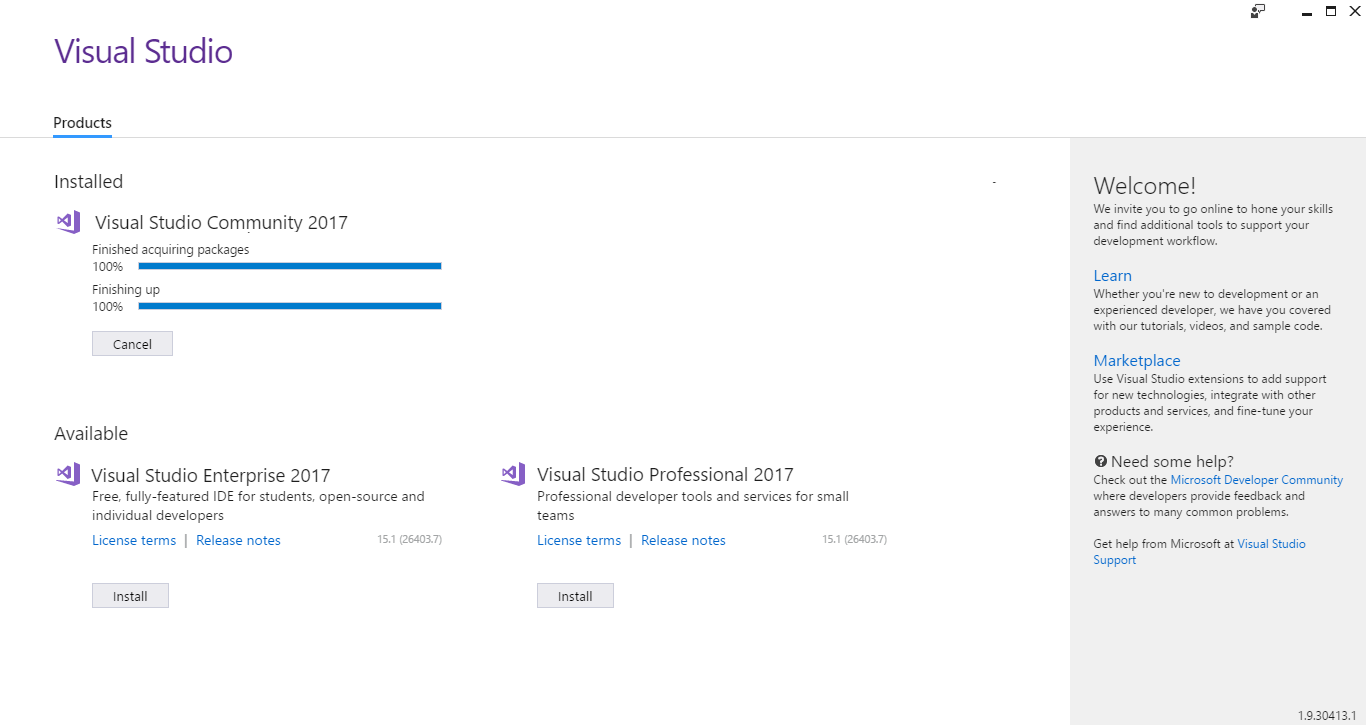 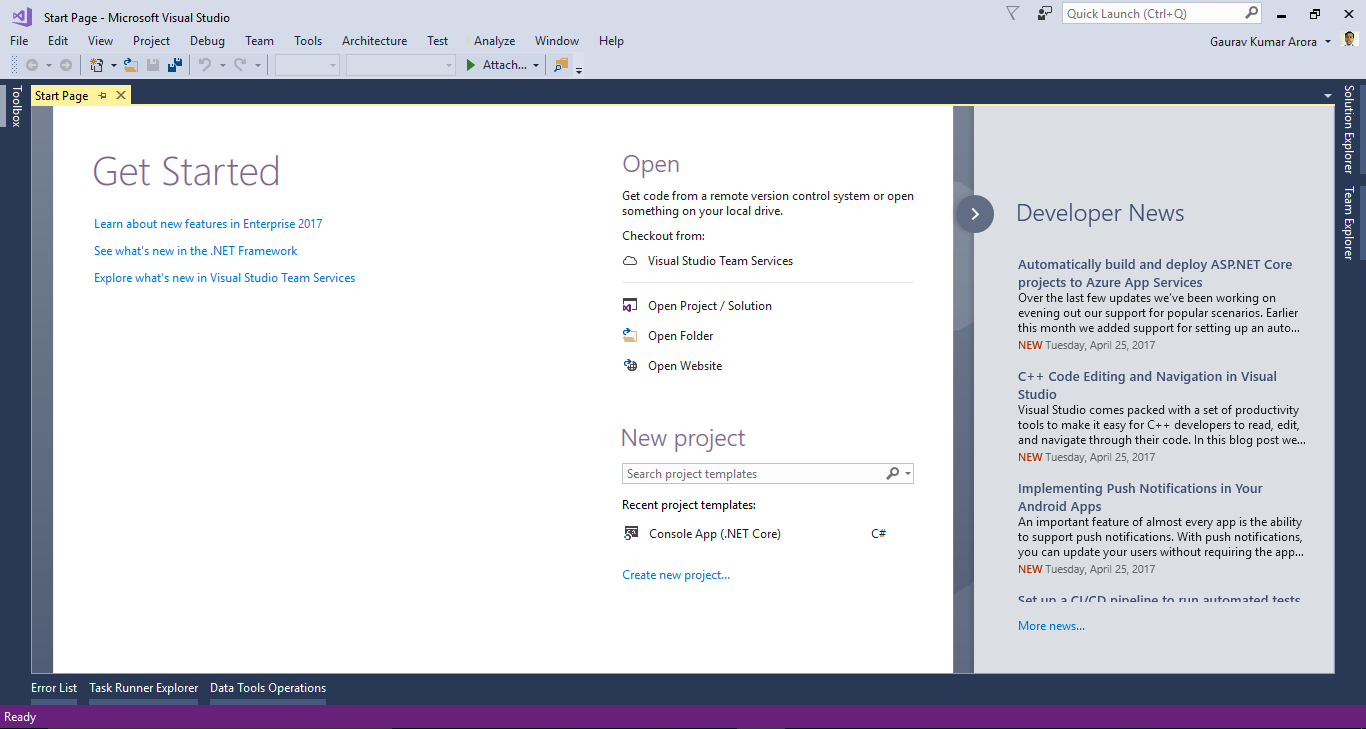 We are all set to start with our first step.

Answer the following questions by covering the concepts of today’s learning.

Today, we walked you through some important concepts of .NET Core and .NET Standard. You learned what programs and algorithms are in the programming world. 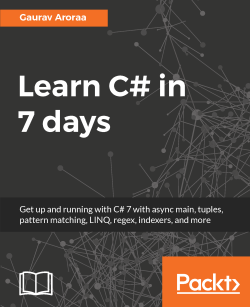