By the end of this book, you'll understand how decentralized blockchain network functions and why decentralization is such an important feature for securing a blockchain.


Chapter 1. Setting up the Project

Welcome to Learning Blockchain Programming with JavaScript. As the name suggests, in this book, you'll learn how to build a fully functional blockchain from scratch using the JavaScript programming language. The blockchain that you build will have functionalities that are similar to those you would find in a production-level blockchain for examples such as Bitcoin or Ethereum.

The blockchain that we will create throughout this book will be able to carry out the following functionalities:

Along with these, the blockchain will have many other important features. You'll get to explore those as you read further through the chapters.

To follow this book, all you'll need is a computer and some basic knowledge of the JavaScript programming language.

Firstly, in this introductory chapter, let's try to understand what blockchain actually is. This will help you to become familiar with the concept of blockchain, as this is a prerequisite for the book. Then we'll move on to learn how to set up the project to create our own blockchain.

So, let's get started!

What is a blockchain?

In this section, let's go through a brief explanation of what a blockchain is. Simply put, a blockchain is an immutable, distributed ledger. Now, these words may seem quite complex, but when we try to break them down, it is very easy to understand them. Let's begin by exploring what a ledger actually is. A ledger is simply a collection of financial accounts or transactions (or in other words, a record of transactions that people have made).

Let's take a look at the following example to get a better understanding of ledgers. In this example, Kim paid Joe $30 and Kevin paid Jen $80. A ledger is simply a document that is used to keep track of these transactions. You can see this depicted in the following screenshot: 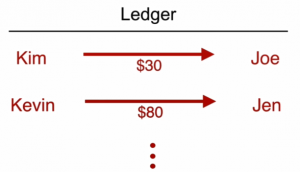 In the world today, we see many applications, platforms, and networks that are all centralized. Take Facebook, for example. Everyone who uses Facebook has to trust this company is protecting their data and not abusing it. Compared to this, blockchain is different. Blockchain technology is not centralized like Facebook, Google, or most other entities. Instead, it is a distributed network, which means that any given blockchain network is not controlled by a single entity, but is run by normal, everyday people. Blockchains, such as Bitcoin, are supported and hosted by thousands of people worldwide. Consequently, all of our data, or the ledger in this case, is not at the mercy of a single company or entity. This proves to be a great benefit of blockchain technology because by being distributed, we do not have to trust a single company with our data. Instead, our data is persisted by the entire network of thousands of different people who are all acting independently.

Each individual who contributes to the blockchain network is called a node, and each node has the exact same copy of the ledger. Therefore, the ledger data is hosted and synchronized across the entire network.

So, a blockchain is an immutable distributed ledger. This means that it is a ledger in which the transactions can never be changed and the blockchain itself is distributed across the network and run by thousands of independent people, groups, or nodes.

Now that we're aware of what blockchain is, let's move onto setting up our project environment to build our blockchain.

What you will learn...

In this book, we will start by building the blockchain itself. At this point, we will build a blockchain data structure that has the following abilities:

Thereafter, we will create an API or a server that will allow us to interact with our blockchain from the internet. Through our API, we will be able to use all of the functionality that we have built into our blockchain data structure.

Furthermore, you'll be learning to create a decentralized network. This means that we'll have multiple servers running and acting as separate nodes. We'll also make sure that all of the nodes interact with each other properly and share data with each other in the correct format. In addition, you'll learn how to synchronize the entire network by making sure that any new nodes or transactions that are created are broadcast throughout the entire network.

Finally, we will create a block explorer. This will be a user interface that will allow us to explore our blockchain in a user-friendly manner, and it will also allow us to query our blockchain for specific block transactions and addresses.

Firstly, however, we need to set up our development environment.

Let's get started with building our blockchain project. The first thing we're going to do is open our terminal and create our blockchain directory by typing commands into the terminal, as seen in the following screenshot: 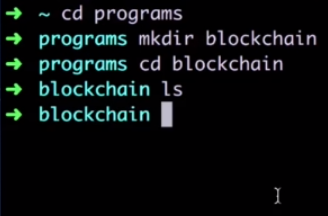 Next, let's return back to our blockchain directory by typing the following command in the terminal:

In the blockchain directory, let's run the following command to create the npm project:

After running the preceding command, you will get some options on your terminal. To set up the project, you can just press Enter through those options.

So, this is pretty much all we need to do in order to set up our project folder structure. Now, if you go to our blockchain directory and open it with a text editor such as Sublime or Atom (or whatever you would like), you will get to see the file structure, as seen in the following screenshot:

The blockchain directory consists of the dev folder that we just created. Inside the dev folder, we can observe our blockchain.js and test.js files. Also, when we run the npm init command, it creates the package.json file for us. This .json file will keep track of our project and any dependencies that we need, allowing us to run scripts. We'll be working more inside of this package.json file in further chapters, so you'll become more familiar with it as we progress through the book.

Before we start coding our blockchain, it is worth noting that the entire source code for this book  can be found on GitHub at the following link: https://github.com/PacktPublishing/Learn-Blockchain-Programming-with-JavaScript. In this repository, you'll find the completed code for the entire project, and you will also be able to explore all of the files that we will be building in further chapters. Therefore, this may be a good resource for you to use as you make your way through the book.

To summarize this introductory chapter, we began by exploring what a blockchain actually is and understanding how it functions. Then we moved onto setting up our project to create our very own blockchain. We also had a quick overview of all of the topics you'll get to learn about in this book.

In the next chapter, we'll build our blockchain by learning about the constructor function, prototype object, block method, transaction method, and many more important concepts.

Seamless procedure to purchase and save books

Good book simple to read. But does have some errors in text 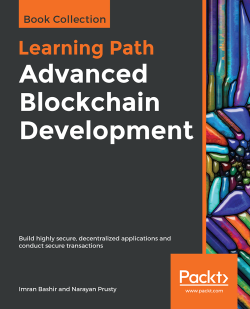 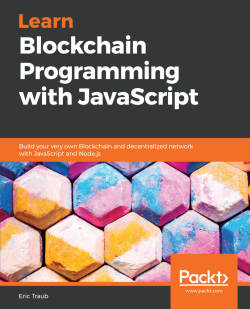