Kotlin is an easy-to-learn, pragmatic language that has adopted the best traits of other popular languages such as Java, C#, Python, Groovy, and Scala. This video tutorial is your one stop guide to getting started with Kotlin programming, covering the basics, object-oriented features, and even functional programming in Kotlin.

You’ll take your first steps in Kotlin programming by building a simple “Hello, Kotlin” program. You’ll explore the basics such as types and syntax, and also basics of object-oriented programming such as classes and inheritance. Next, you’ll dive into Kotlin objects and functions, and see how they’re different from other programming languages. You’ll learn to organize your code and simplify your coding experience with the help of different functions and statements in Kotlin. From there, you’ll lwork with collections and streams, employ loops in your code, and filter data with the help of different collection operations.

Finally, you’ll dive into Kotlin’s functional aspects, where you’ll work with extension functions and values, model functions, and overload functions in Kotlin. By the end of this video tutorial, you’ll be well-versed with Kotlin’s fundamental features, and will be ready to begin your career as a Kotlin developer.

This easy-to-follow tutorial covers the full set of features in Kotlin programming. 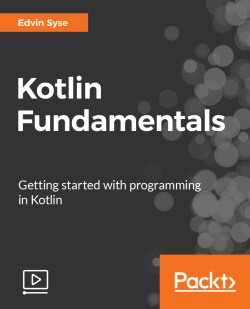