Regular expressions are a powerful tool in the programmer's toolbox and allow pattern matching. They are also used for manipulating text and data. This book will provide you with the know-how (and practical examples) to solve real-world problems using regex in Java.

You will begin by discovering what regular expressions are and how they work with Java. This easy-to-follow guide is a great place from which to familiarize yourself with the core concepts of regular expressions and to master its implementation with the features of Java 9. You will learn how to match, extract, and transform text by matching specific words, characters, and patterns. You will learn when and where to apply the methods for finding patterns in digits, letters, Unicode characters, and string literals. Going forward, you will learn to use zero-length assertions and lookarounds, parsing the source code, and processing the log files. Finally, you will master tips, tricks, and best practices in regex with Java.


Chapter 1. Getting Started with Regular Expressions

We will be covering the following topics in this chapter:

Regular expression (or in short regex) is a very useful tool that is used to describe a search pattern for matching the text. Regex is nothing but a sequence of some characters that defines a search pattern. Regex is used for parsing, filtering, validating, and extracting meaningful information from large text, such as logs and output generated from other programs.

We find regular expressions in day-to-day use on many websites. For example, while searching for your favorite recipe on search engines, while filling up forms and entering data such as username and passwords, and so on. While setting up a password on many sites, we encounter password validation errors, such as password must contain one digit or at least one uppercase letter or at least one special character, and so on. All these checks can be done using regular expressions. A few more typical examples of regular expressions are validating phone numbers or validating postal/zip/pin codes.

A bit of history of regular expressions

Renowned mathematician Stephen Kleene built a model in the year 1956 using finite automata for simple algebra. He described regular languages using his mathematical notation called regular sets. Computer programmers started using regular expressions in the 1970s when the Unix operating system and some of its text editors and text processing utilities such as ed, sed, emacs, lex, vi, grep, awk, and so on were built. Regular expressions gained more popularity with the arrival of Perl and Tcl scripting languages in the 1980s and 1990s. Since then, all the popular programming languages, such as Java, Python, Ruby, R, PHP, and .NET have built very good support of regular expressions.

Some of the popular flavors of regular expressions are as follows:

What type of problems need regular expressions to solve

Some programmers wonder why they even need to learn regular expressions. Here are some use cases:

The basic rules of regular expressions

Many of you are familiar with wild cards (in the Unix world, it is called glob pattern) matching of text. Here:

The regular expression pattern goes many steps farther than wild cards, where one can set many rules in a regex pattern, such as the following:

For example, in a regex to match a or b we can use the following alternation:

To match one or more instances of the digit 5, we can use the following:

To match any substring that starts with p and ends with w, we can use the following:

Constructs of the standard regular expression and meta characters

Let's look at some basic examples of regular expressions:

This will match abc in a line, and the line must not have anything other than the string abc due to the use of the start and end anchors on either side of the regex.

This will match either the string cat or the string dog, ensuring both cat and dog must be complete words; thus, it will fail the match if the input is cats or dogs.

This is a character class with a character range. The preceding example will match a digit between 0 and 9.

This is a character class with a character range. The preceding example will match any alpha-numeric character.

This regex will match an input containing only one or more digits.

This regex not only allows only one digit at the start and end but also enforces that between these two digits there must be one non-digit character. For example, 1-5, 3:8, 8X2, and so on are valid inputs.

This matches any character one or more times. For example, qwqewe, 12233, or f5^h_=!bg are all valid inputs:

This matches a word, followed by one or more whitespaces, followed by another word in an input. For example, hello word, John Smith, and United Kingdom will be matched using this regex.

Engine is a term often used for an underlying module that evaluates the provided regular expression and matches the input string.

The effect of eager matching on regular expression alternation

This regular expression engine behavior may return unexpected matches in alternation if alternations are not ordered carefully in the regex pattern.

Take an example of this regex pattern, which matches the strings white or whitewash:

However, consider swapping the positions of the third and fourth alternatives in our regex pattern to make it as follows:

If we apply this against the same input, whitewash, then the regex engine correctly returns the match as whitewash.

We can also use anchors or boundary matchers in our regular expressions to make it match a complete word. Any of the following two patterns will match and return whitewash as a match:

Let's take a look at a more interesting example, which attempts to match a known literal string "cat & rat" or a complete word in the input, using the following pattern:

If the input string is story of cat & rat, and we apply our regex pattern repeatedly, then the following four matched substrings will be returned:

If we apply this regex on the same sting, story of cat & rat, and we apply our regex pattern repeatedly, then the following three matched substrings will be returned:

In this chapter, you were introduced to regular expressions with a bit of history and their flavors. You learnt some use cases where regex are needed. Finally, we covered the basic rules and building blocks of writing regex, with a few examples. You also learnt the eager-matching behavior of the regex engine and how it may impact matching in alternations. 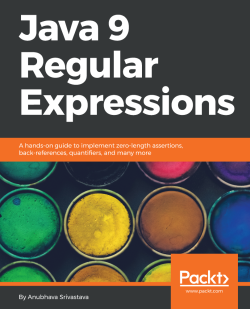