Java is an object-oriented programming language. It is one of the most widely accepted languages because of its design and programming features, particularly in its promise that you can write a program once and run it anywhere.

This cookbook offers a range of software development examples in simple and straightforward Java 9 code, providing step-by-step resources and time-saving methods to help you solve data problems efficiently. Starting with the installation of Java, each recipe addresses a specific problem, with a discussion that explains the solution and offers insight into how it works.


ChapterÂ 1.Â Installation and a Sneak Peek into Java 9

In this chapter, we will cover the following recipes:Â

Every quest for learning a programming language begins with setting up the environment to experiment our learning. Keeping in sync with this philosophy, in this chapter, we will show you how to set up your development environment and then run a simple modular application to test our installation. After that, we'll give you an introduction to the new features and tools in JDK 9. Then, we'll end the chapter with a comparison between the JDK 8 and JDK 9 installations.

Installing JDK 9 on Windows and setting up the PATH variable

In this recipe, we will look at installing JDK on Windows and how to set up the PATH variable to be able to access the Java executables (such asÂ javac, java, andÂ jar, among others) from anywhere within the command shell.

Now that we have finished installing JDK, let's see how we can set the PATH variable.

The tools provided with JDK, namely javac, java, jconsole, andÂ jlink, among others, are available in the bin directory of your JDK installation. There are two ways you could run these tools from the command prompt:

Let's see how you can add the JDK bin directory to the PATH variable: 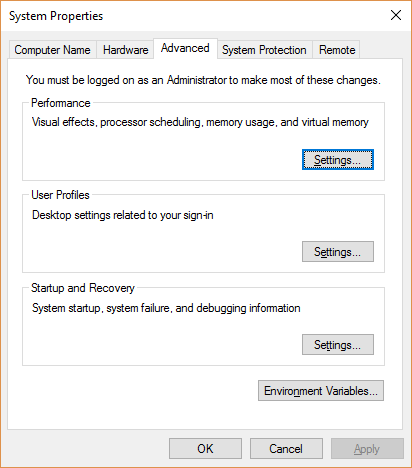 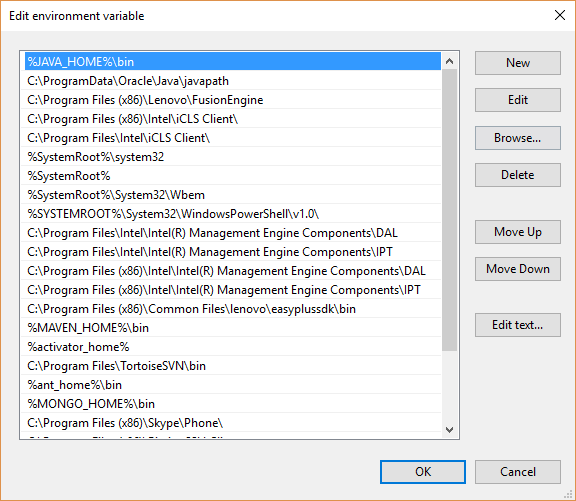 The following image shows the other Windows versions:

In this recipe, we will look at installing JDK on Linux (Ubuntu, x64) and also how to configure the PATH variable to make the JDK tools (such as javac, java, jar, and others) available from any location within the terminal.

Source the .bashrc file to apply the new aliases:

All the examples in this book are run against JDK installed on Linux (Ubuntu, x64), except for places where we have specifically mentioned that these are run on Windows. We have tried to provide run scripts for both platforms.The recipes on JavaFX are completely executed on Windows.Â

Compiling and running a Java application

In this recipe, we will write a very simple modular Hello world program to test our JDK installation. This simple example prints Hello world in XML; after all it's the world of web services.

You should have JDK installed and the PATH variable updated to point to the JDK installation.

WeÂ will explain modules in detail in Chapter 3, Modular Programming. But this example is just to give you a taste of modular programming and also to test your JDK installation.Â

The directory structure with the preceding files is as follows:

Do not worry if you are not able to understand the options passed with the java or javac commands. You will learnÂ about them in Chapter 3, Modular Programming.Â

The release of Java 9 is a milestone in the Java ecosystem. The much awaited modular framework developed under Project Jigsaw will be part of this Java SE release. Another major feature in this is the JShell tool, which is an REPL tool for Java. Apart from this, there are other important API changes and JVM-level changes to improve the performance and debuggability of the JVM. In a blog post (https://blogs.oracle.com/java/jdk-9-categories), Yolande Poirier categorizes JDK 9 featuresÂ into the following:Â

The same blog post has summarized the preceding categorization into the following image: 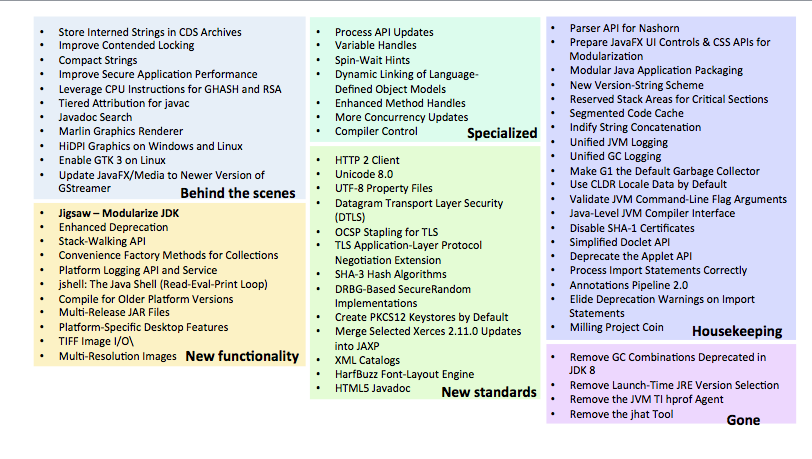 In this recipe, we will discuss a few important features of JDK 9 and, wherever possible, also show a small code snippet of that feature in action. Every new feature in JDK is introduced by means of JDK Enhancement Proposals, also called JEPs. More information about the different JEPs part of JDK 9 and the release schedule of JDK 9 can be found on the official project page:http://openjdk.java.net/projects/jdk9/.Â

We have picked a few features, which we feel are amazing and worth knowing about. In the following few sections, we'll briefly introduce you to those features.

Java's Process API has been quite primitive, with support only to launch new processes, redirect the processes' output, and error streams. In this release, the updates to the Process API enable the following:

This feature is being included in the incubator module. This means that the feature is expected to change in the subsequent releases and may even be removed completely. So, we advise you to use this on an experimental basis.

Java's HTTP API has been the most primitive. Developers often resort to using third-party libraries, such as Apache HTTP, RESTlet, Jersey, and so on. In addition to this, Java's HTTP API predates the HTTP/1.1 specification and is synchronous and hard to maintain. These limitations called for the need to add a new API. The new HTTP client API provides the following:

Let's see a sample code to make an HTTP GET request using the new APIs. Below is the module definition defined within the file module-info.java:

The following code uses the HTTP Client API, which is part of jdk.incubator.httpclient module:

In Java SE 7, _ were introduced as part of the numbers, whereby a large number could be conveniently written by introducing _ between the digits. This helped in increasing the readability of the number, for example:

In Java SE 8, the use of _ in the variable names, as shown earlier, resulted in a warning, but in Java SE 9, this use results in an error, which means that the variables can no longer have _ in their names.

Java SE 9 is introducing private methods, wherein the default methods in the interfaces can share code between them by refactoring the common code into private methods.Â

Another useful feature is the allowing of effectively final variables to be used with try-with-resources. As of Java SE 8, we needed to declare a variable within the try-with-resources block, such as the following:Â

However, with Java SE 9, we can do the following:Â

Here,Â conn is effectively final; that is, it has been declared and defined before, and will never be reassigned during out the course of the program execution.

You must have seen languages, such as Ruby, Scala, Groovy, Clojure, and others shipping with a tool, which is often called REPL (Read-Eval-Print-Loop). This REPL tool is extremely useful in trying out the language features. For example, in Scala, we can write a simple Hello WorldÂ program as scala> println("Hello World");

Some of the advantages of the JShell REPL are as follows:

Let's quickly spawn our command prompts/terminals and run the JShell command, as shown in the following image:

There is a lot more we can do, but we will keep that for Chapter 13, The Read-Evaluate-Print Loop (REPL) Using JShell.

As of now, JAR files can contain classes that can only run on the Java version they were compiled for. To leverage the new features of the Java platform on newer versions, the library developers have to release a newer version of their library. Soon, there will be multiple versions of the library being maintained by the developers, which can be a nightmare. To overcome this limitation, the new feature of multirelease JAR files allows developers to build JAR files with different versions of class files for different Java versions. The following example makes it more clear.Â

Here is an illustration of the current JAR files:

In the preceding illustration, the JAR files support class files for two Java versions--9 and 10. So, when the earlier JAR is executed on Java 9, the A.class under the versions-Â 9 folder is picked for execution. On a platform that doesn't support multirelease JAR files, the classes under the versions directory are never used. So, if you run the multirelease JAR file on Java 8, it's as good as running a simple JAR file.

In this update, a new class,Â java.util.concurrent.Flow, has been introduced, which has nested interfaces supporting the implementation of a publish-subscribe framework. The publish-subscribe framework enables developers to build components that canÂ asynchronously consume a live stream of data by setting up publishers that produce the dataÂ and subscribers that consume the data via subscription, which manages them. TheÂ four new interfaces are as follows:

The main aim of this project is to introduce the concept of modularity; support for creating modules in Java and then apply the same to the JDK; that is, modularize the JDK. Some of the benefits of modularity are as follows:

There are various JEPs, which are part of this project, as follows:

There are quite a few features listed that are significant for developers, and we thought of grouping them together for your benefit:

There are a few new command-line tools introduced in JDK 9 to support new features. We will give you a quick overview of these tools and the same will be explained with recipes of their own in the later chapters.

You should have JDK 9 installed and the PATH environment variable updated to add the path to the bin directory of your JDK installation. Also, you need to have tried outÂ HelloWorldXml explained in the recipe,Â Compiling and running a Java application.

We will look at a few interesting new command-line tools introduced.

This tool is used for scanning the usage of deprecated APIs in a given JAR file, classpath, or source directory. Suppose we have a simple class that makes use of the deprecated method,Â addItem, of theÂ java.awt.List class, as follows:

Compile the preceding class and then use jdeprscan, as follows:

You will notice that this tool prints outÂ class Test uses method java/awt/List addItem (Ljava/lang/String;)V deprecated, which is exactly what we expected.

This tool analyses your code base specified by the path to theÂ .class file, directory, or JAR, lists the package-wise dependency of your application, and also lists the JDK module in which the package exists. This helps in identifying the JDK modules that the application depends on and is the first step in migrating to modular applications.

We can run the tool on our HelloWorldXml example written earlier and see what jdeps provides:

This tool is used to select modules and create a smaller runtime image with the selected modules. For example, we can create a runtime image by adding theÂ com.packt modules created in our HelloWorldXml example:

Looking at the contents of theÂ img folder, we should find that it has theÂ bin, conf, include, and lib directories. We will learn more about jlink under Chapter 3, Modular Programming.

JMOD is a new format for packaging your modules. This format allows including native code, configuration files, and other data that do not fit into JAR files. The JDK modules have been packaged as JMOD files.

This tool has been briefly explained earlier, under the title,Â JEP 222: jshell - the Java shell (Read-Eval-Print Loop)

Due to the application of a modular system to JDK under Project Jigsaw, there have been a few changes in the JDK directory structure installed in your systems. In addition to these, there were a few changes undertaken to fix the JDK installation structure, which dates back to the times of Java 1.2. This has been deemed to be a golden opportunity by the JDK team to fix the issues with the JDK directory structure.

To see the difference in the JDK 9 directory structure, you will need to install a pre-JDK 9 version. We have chosen to use JDK 8 to compare with JDK 9. So, go ahead and install JDK 8 before you proceed further.Â 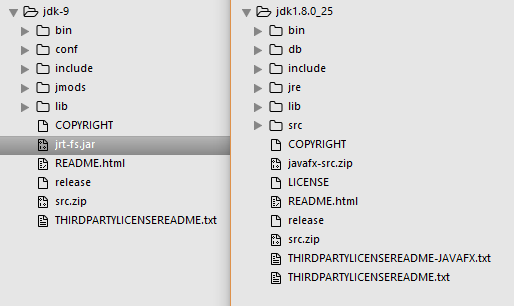 Refer to the following recipe of this chapter:

So far cooking up a storm, java 9 style.. 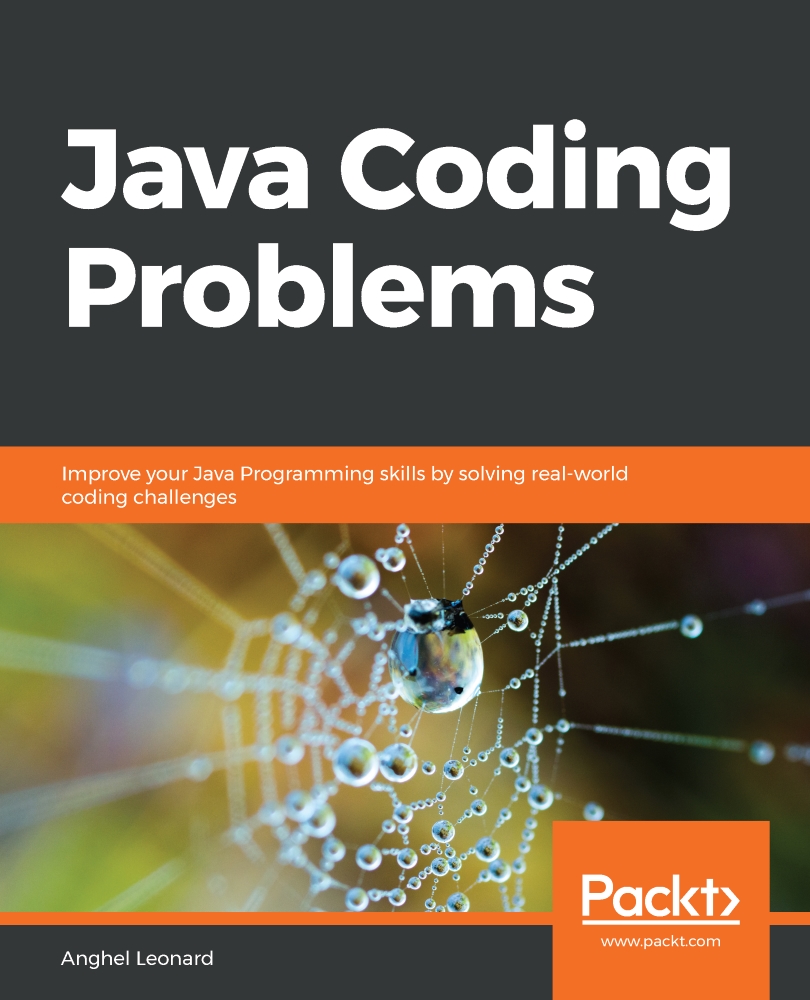 Develop your coding skills by exploring Java concepts and techniques such as Strings, Objects and Types, Data Structures and Algorithms, Concurrency, and Functional programming 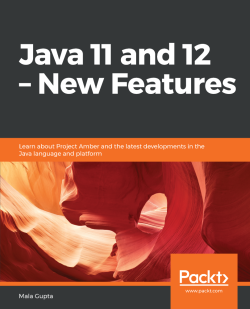 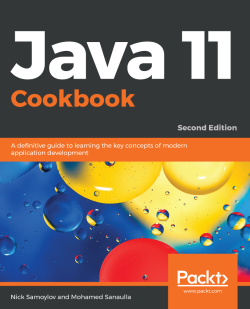