ESP32 is a low-cost MCU with integrated Wi-Fi and BLE. Various modules and development boards-based on ESP32 are available for building IoT applications easily. Wi-Fi and BLE are a common network stack in the Internet of Things application. These network modules can leverage your business and projects needs for cost-effective benefits.

This book will serve as a fundamental guide for developing an ESP32 program. We will start with GPIO programming involving some sensor devices. Then we will study ESP32 development by building a number of IoT projects, such as weather stations, sensor loggers, smart homes, Wi-Fi cams and Wi-Fi wardriving. Lastly, we will enable ESP32 boards to execute interactions with mobile applications and cloud servers such as AWS.

By the end of this book, you will be up and running with various IoT project-based ESP32 chip.

ESP32 is a low-cost chip that consists of MCU with Wi-Fi and a Bluetooth network stack that makes it possible to build an Internet of Things (IoT) application. In this chapter, we will review ESP32 boards and learn ESP32 basic development.

We will also cover the following topics:

Before we begin, make sure you have the following things ready:

There are two forms for ESP32: chip form and module form. ESP32 chip and module forms have different sizes and numbers of pins. Choosing ESP32 form is dependent on your design and purposes. The size factor of ESP32 form can also be one of your preferences when you make and design an IoT solution-included PCB scheme. A list of ESP32 chips and modules can be read on the following website: https://www.espressif.com/en/products/hardware/modules.

Next, we will review some development boards that use the ESP32 chip or ESP32 module.

Since ESP32 has two forms, in chip and module, there are some development boards with an ESP32 chip or ESP32 module. In this book, we will not learn how to make a board-based ESP32. Instead, we will use pre-existing, ready development boards available on the market.

We can categorize boards-based ESP32 into two models. The first board models are the development boards officially manufactured by Espressif. The second models are from their partners or personal makers.

Let's review some available ESP32 development boards on the market.

In general, Espressif provides an ESP32 development kit board that we can use directly. We don't need to take any effort to make a PCB board and do soldering of the ESP32 chip. A list of ESP32 boards from Espressif can be found at this link: https://www.espressif.com/en/products/hardware/development-boards. We will review the two ESP32 boards: ESP32-PICO-KIT and ESP-WROVER-KIT boards.

ESP32-PICO-KIT is a basic development board that is small in size. This board fits on breadboard PCB, so you can do wiring on it. The board consists of EPS32 chips such as serial USB CP2102 (version 4.0)/CP2102N (version 4.1). You can connect this board to a computer through USB.

ESP-WROVER-KIT is a complete development board. This consists of various sensors and modules. The board uses ESP32-WROVER for ESP32 board implementation. The following are the main features from ESP-WROVER-KIT:

A form of ESP-WROVER-KIT can be seen in this photo: 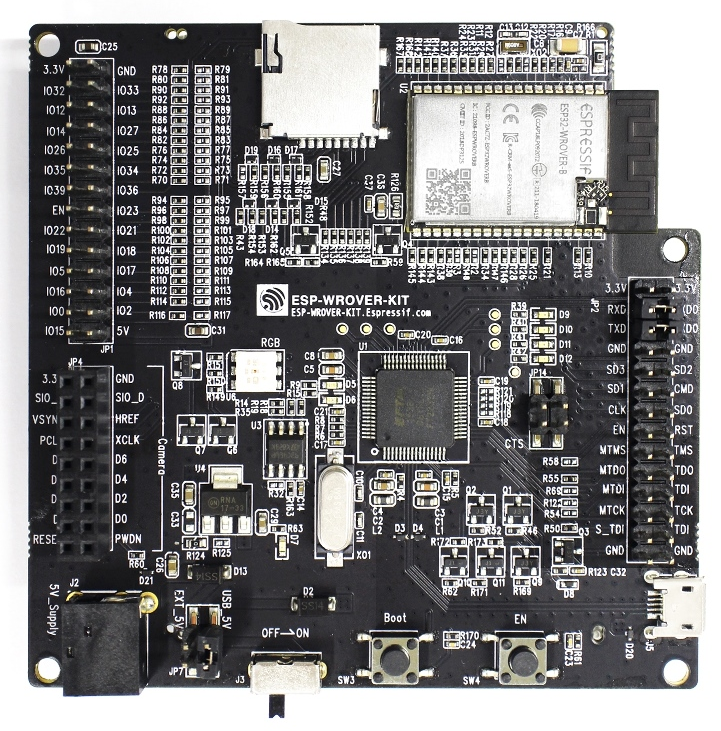 We can buy ESP32 chips and modules from Espressif and their distributors. Then, we can make our own development board for ESP32. Sometimes, these boards-based ESP32 boards are sold to the public. In this section, we will review two ESP32 development boards. 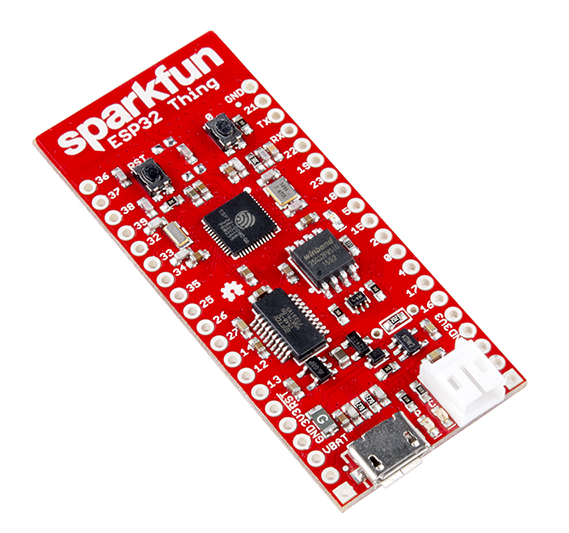 Adafruit is an electronic manufacturer and electronic product online store. They make a development board-based ESP32 called Adafruit HUZZAH32 – ESP32 Feather Board. This board uses the ESP32 module. Adafruit HUZZAH32 has a TTL USB and LiPo connector like the SparkFun ESP32 Thing board. You can visit https://www.adafruit.com/product/3405 to purchase this board: 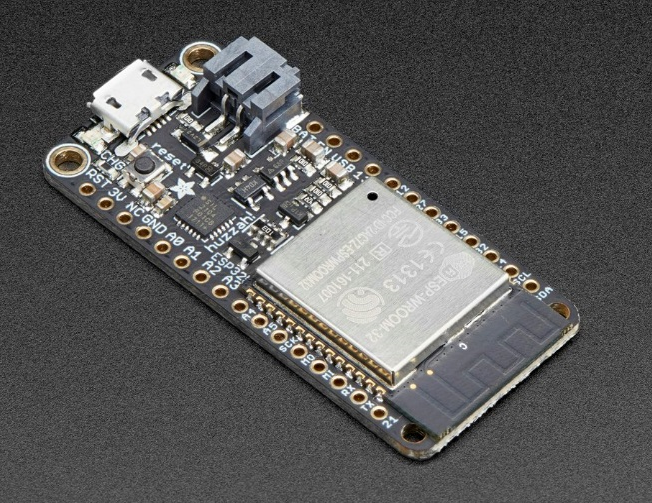 Other board-based ESP32 boards can be found on Alibaba and AliExpress. You can search for ESP32 board as keywords. There are many custom development boards with ESP32 chips or modules.

In this book, I use ESP-WROVER-KIT for testing.

Espressif provides SDK development for ESP32. Technically, there is a guideline document from Espressif on how to set up the ESP32 toolchain. You can follow this guideline for Windows, Linux, and macOS: https://docs.espressif.com/projects/esp-idf/en/latest/get-started/index.html#setup-toolchain.

After completed, you can continue to get ESP-IDF to enable you to develop the ESP32 program. You also need all required libraries for Python. A detailed guideline can be read on this site: https://docs.espressif.com/projects/esp-idf/en/latest/get-started/index.html#get-started-get-esp-idf.

If done, we can develop programs for the ESP32 board. The ESP32 program is written in C programming language, which you should be familiar with. However, we can write ESP32 programs using any text editor. In this book, I use Visual Studio code: https://code.visualstudio.com. This IDE tool is available for Windows, Linux, and macOS.

Next, we develop a simple program with the ESP32 board.

In this section, we will write a simple program for the ESP32 board. We need three LEDs including cable jumpers for this. We will turn on one LED from LED 1 to LED 3. For implementation, I use the ESP-WROVER-KIT board.

We connect three LEDs on the ESP32 board GPIO. We then do the following wiring:

You can see a wiring scheme in the following diagram: 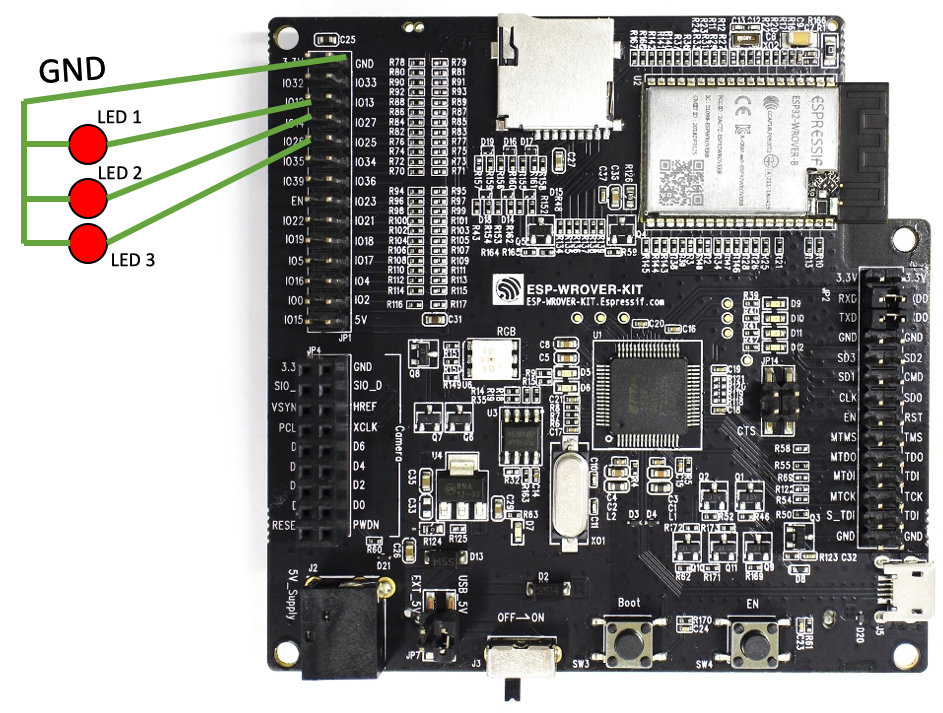 Next, we create a project.

In general, there is no project template for the ESP32 program with SDK. However, we can create a project with the project structure as shown in this screenshot:

Each project has the following files:

We will write code for those files in the next section.

Now, we write scripts and codes on the Makefile, component.mk, and blinking.c files:

Next, we configure the project before flashing on the ESP32 board.

Now, we should configure our project using menuconfig. This tool is a part of the ESP32 toolchain that you have configured previously on your platform.

Open Terminal and navigate to your project directory. Then, you can type this command:

You should get the dialog shown in the following screenshot: 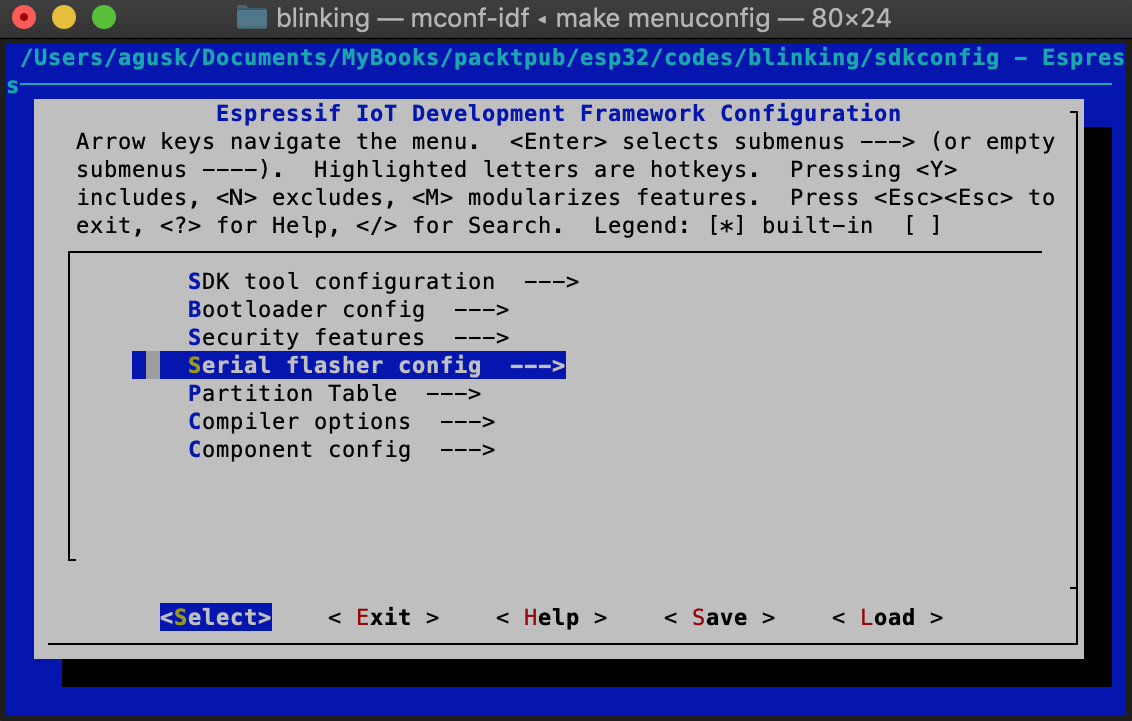 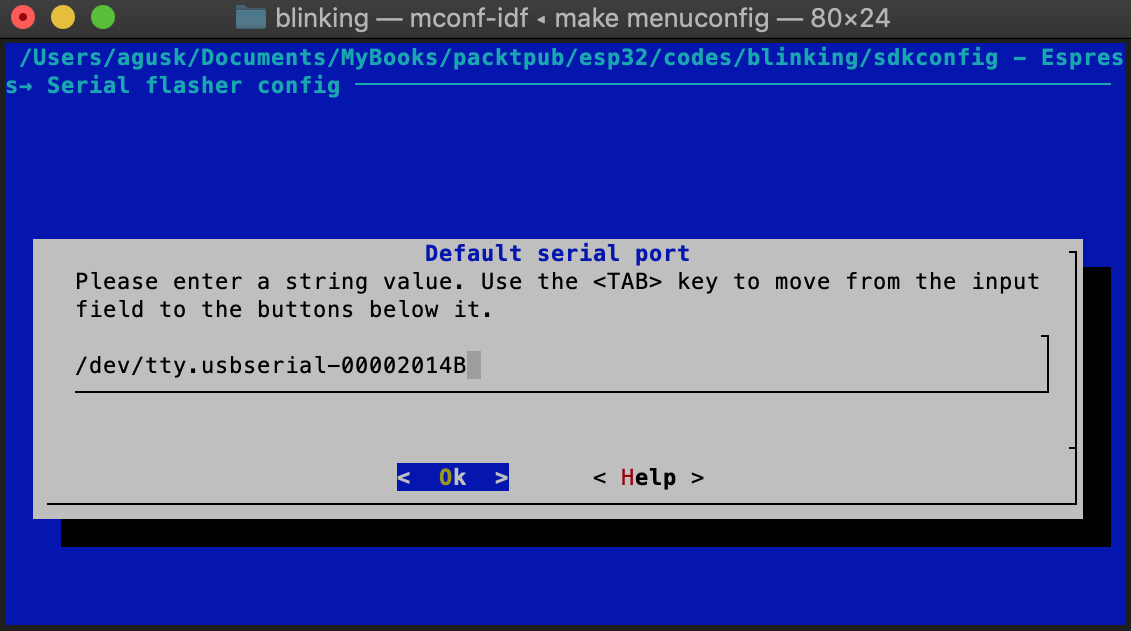 Setting a serial port for the ESP32 board

If complete, click the Save button. The menuconfig program will save your project configuration. The program output can be seen in the following screenshot. You should see that this tool generates the sdkconfig file into your current project directory: 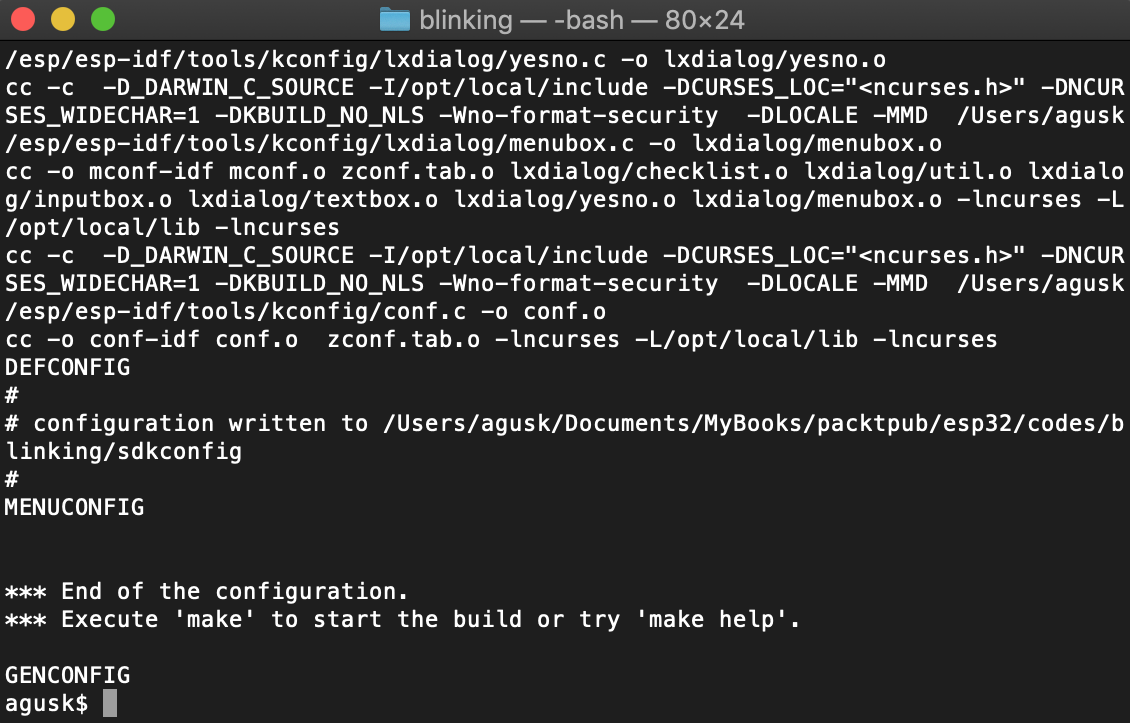 A result of configuring a project

Now, your program is ready for compiling and flashing.

After we configured our project, we can flash our program into the ESP32 board. We can type this command on the current project directory from the following terminal:

This command performs compiling and flashing. If the make command is not found, you should install make for your platform.

If you have configured a serial port of the ESP32 board, the program will be flashed. Otherwise, you will get a timeout because the tool cannot find the ESP32 serial port. You can see my program output on the flashing process in the following screenshot: 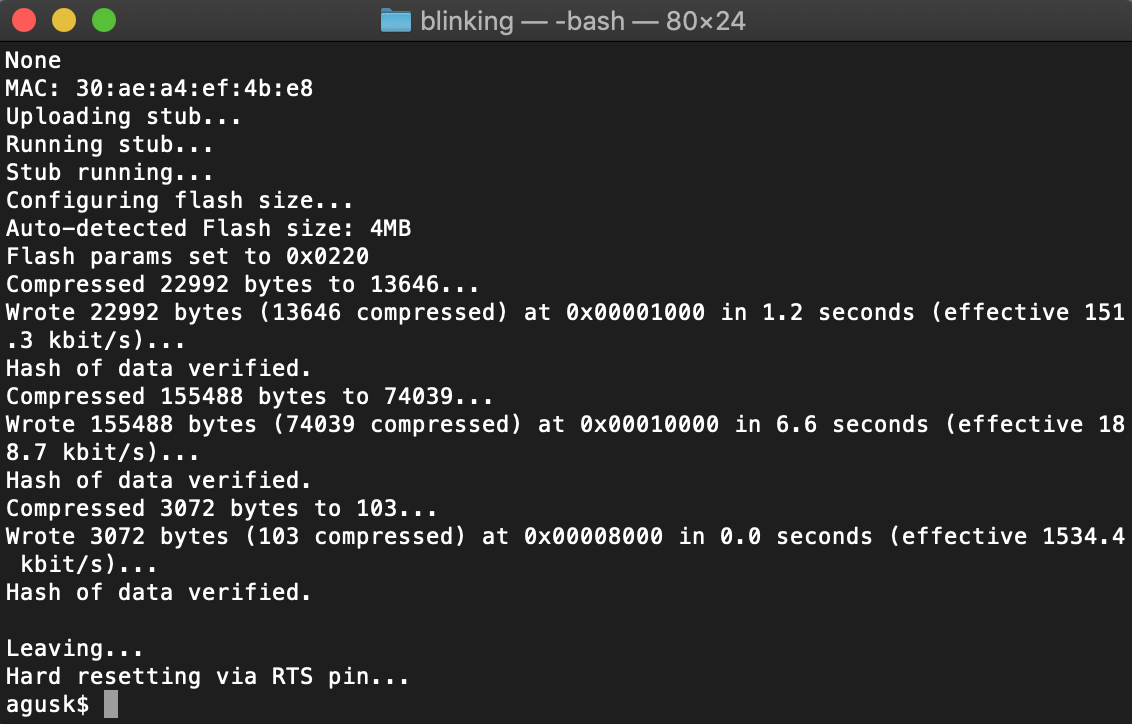 Flashing a program into the ESP32 board

If this succeeds, you should see lighting on LED 1, LED2, and LED 3.

Next, we develop the ESP32 program using Arduino Sketch.

Arduino is the biggest community for open source hardware. It has various Arduino boards to fit your needs. Arduino also provides software to develop the Arduino program, Sketch. Arduino Sketch can be downloaded at https://www.arduino.cc/en/Main/Software.

Now, ESP32 boards support Arduino development. Technically, ESP32 development with Arduino still uses Espressif SDK. You should set Arduino Sketch software to enable you to work with ESP32 boards. You can configure this based on your platform. Please follow this guideline on the following website: https://github.com/espressif/arduino-esp32.

It is recommended to install ESP32 boards into Arduino software via Board Manager. Open the Preferences dialog from Arduino, then put this URL into the board manager URL: https://dl.espressif.com/dl/package_esp32_index.json: 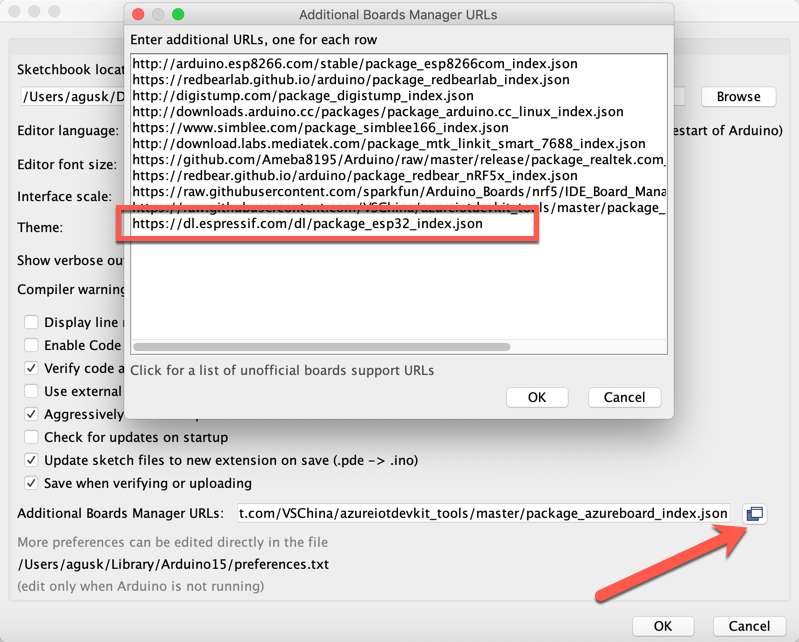 Now, you can install ESP32 boards. To do this, open Boards Manager from the Tools menu. Type esp32 on this form so you can see the esp32 package, as shown in the following screenshot:

After you have clicked Install, Arduino will download all required libraries for ESP32. If done, we will see a list of ESP32 boards on the Arduino software. You can see this in the following screenshot: 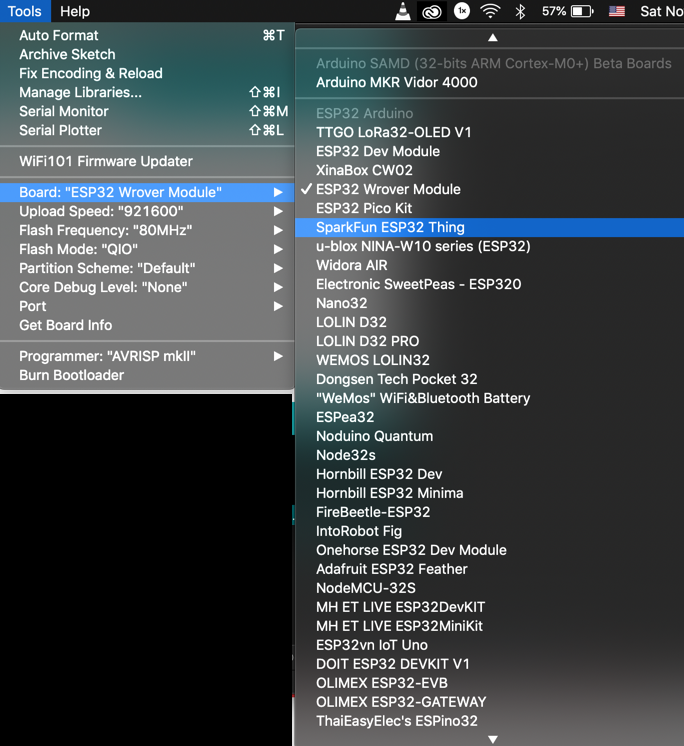 Now, your Arduino is ready for ESP32 boards.

In this section, we develop an Arduino program for ESP32 boards. We will use the previous demo, but we still use Arduino software. If you don't have experience with Arduino Sketch, I recommend learning Sketch programming on this site: https://www.arduino.cc/reference/en/. Since ESP32 has two cores (core 0 and core 1), our Arduino program runs one core. You don't need to worry which about core will be used by Arduino. You can verify which core is used with the xPortGetCoreID() function.

Now, you can set the ESP32 board target and its port, as shown in the following screenshot: 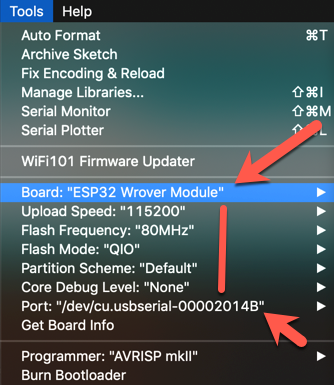 Now, you can compile and upload the Sketch program via Arduino software. If you succeed, you can see the program output as shown in the following screenshot: 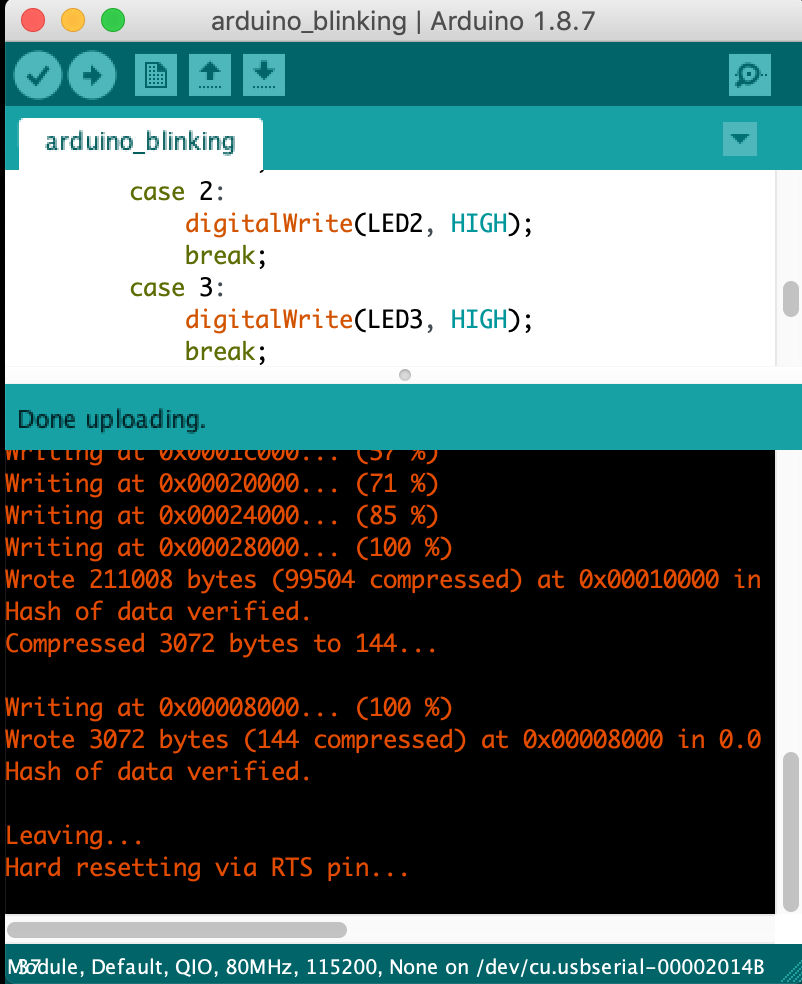 Uploading the Sketch program to the ESP32 board

If you still get errors, please verify your ESP32 board type and its serial port.

In this chapter, we have learned about and reviewed the ESP32 board. We have also set up a development environment for ESP32 boards. At the end of the chapter, we developed a blinking program for three LEDs using Espressif SDK. Lastly, we implemented the same scenario using Arduino software.

In the next chapter, we will learn how to work with LCDs on the ESP32 board.

For more information on ESP-IDF programming, I recommend reading: the ESP-IDF Programming Guide, at https://docs.espressif.com/projects/esp-idf/en/latest/.

fit my expectations, no issues

The content of this book is rare on the Internet. There is not much book about esp-idf. But there are some things that need to be fixed. I've only seen part of the book yet, For example, the makefile gets an error when importing the dht11 driver code. The builds should be done in the cmake format of the git source linked in this book. 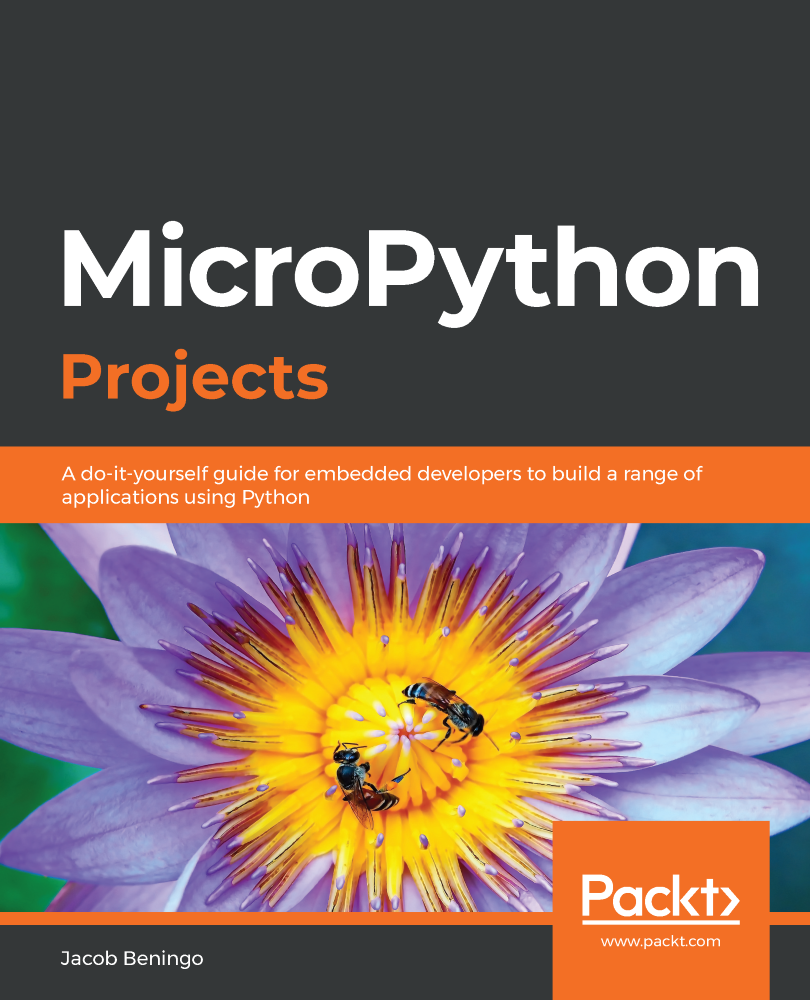 Explore MicroPython through a series of hands-on projects and learn to design and build your own embedded systems using the MicroPython Pyboard, ESP32, the STM32 IoT Discovery kit, and the OpenMV camera module. 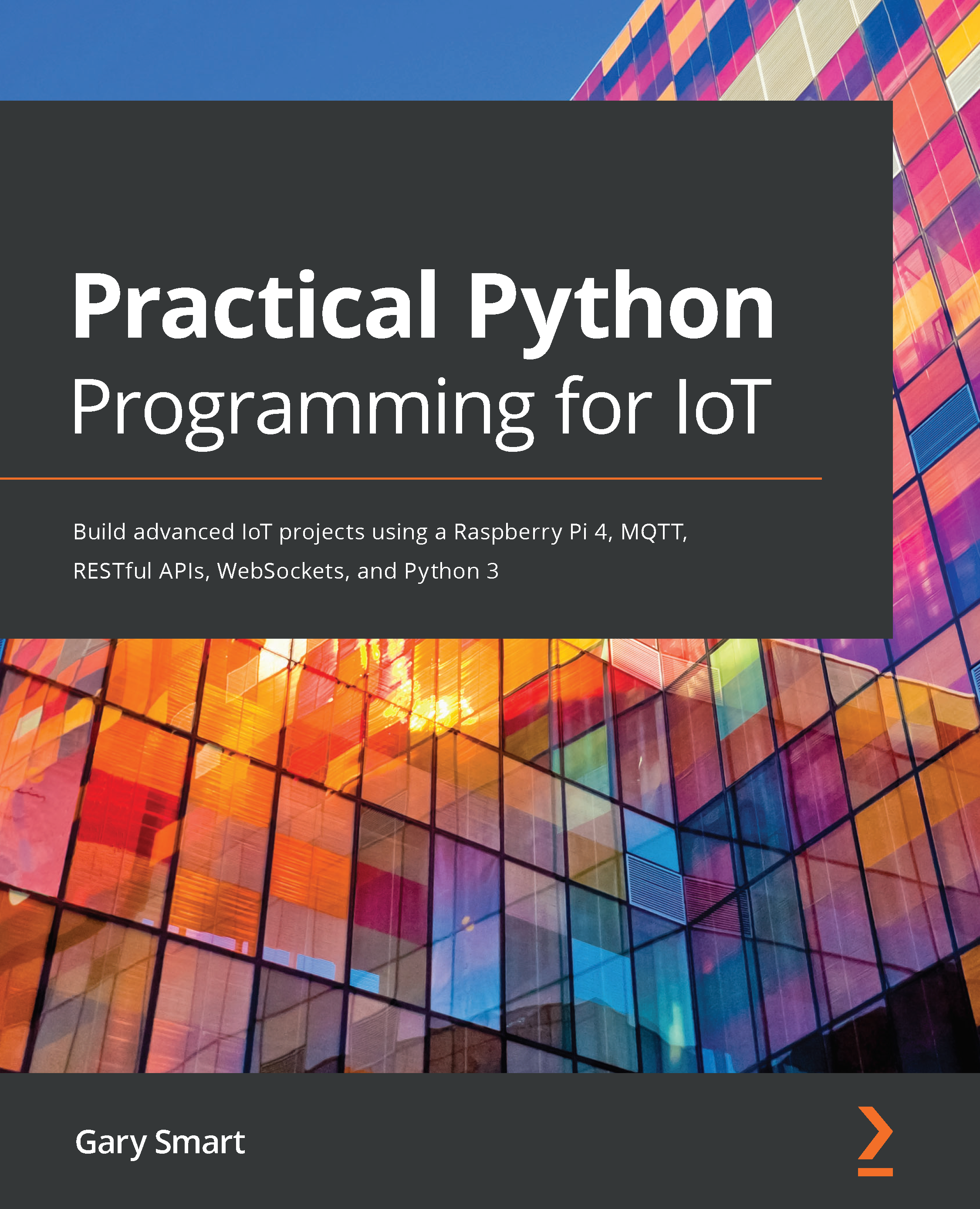 Leverage Python and Raspberry Pi to create complex IoT applications capable of creating and detecting movement and measuring distance, light, and a host of other environmental conditions 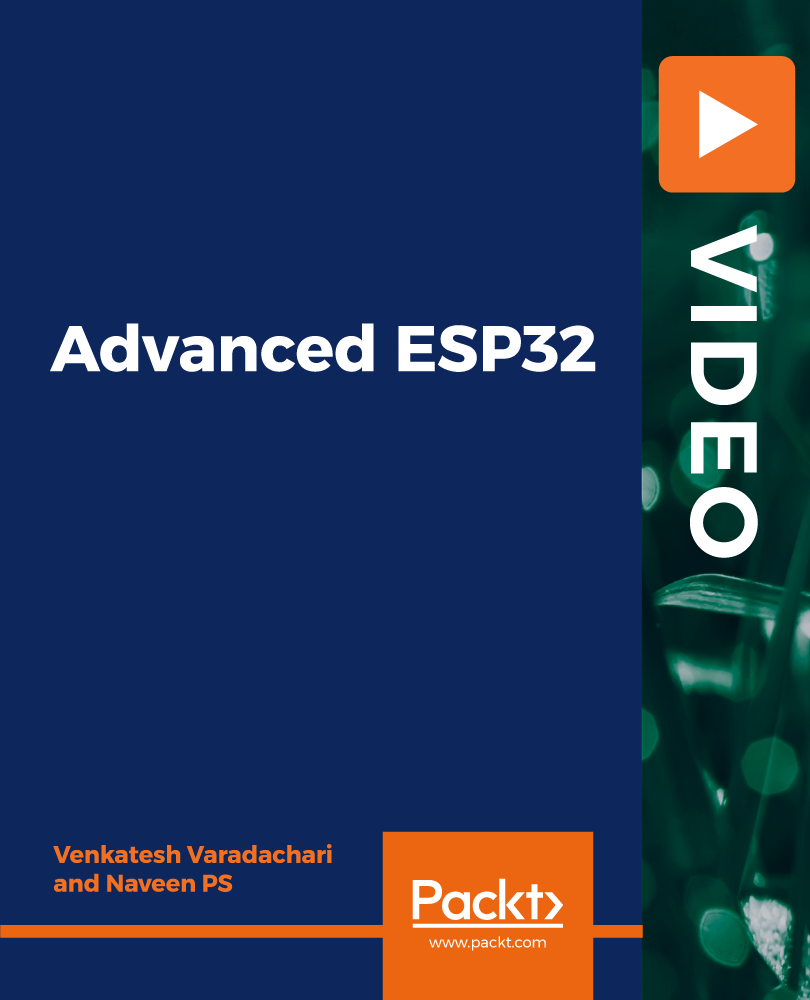 Implement OTA programming, FreeRTOS and deep sleep in the ESP32 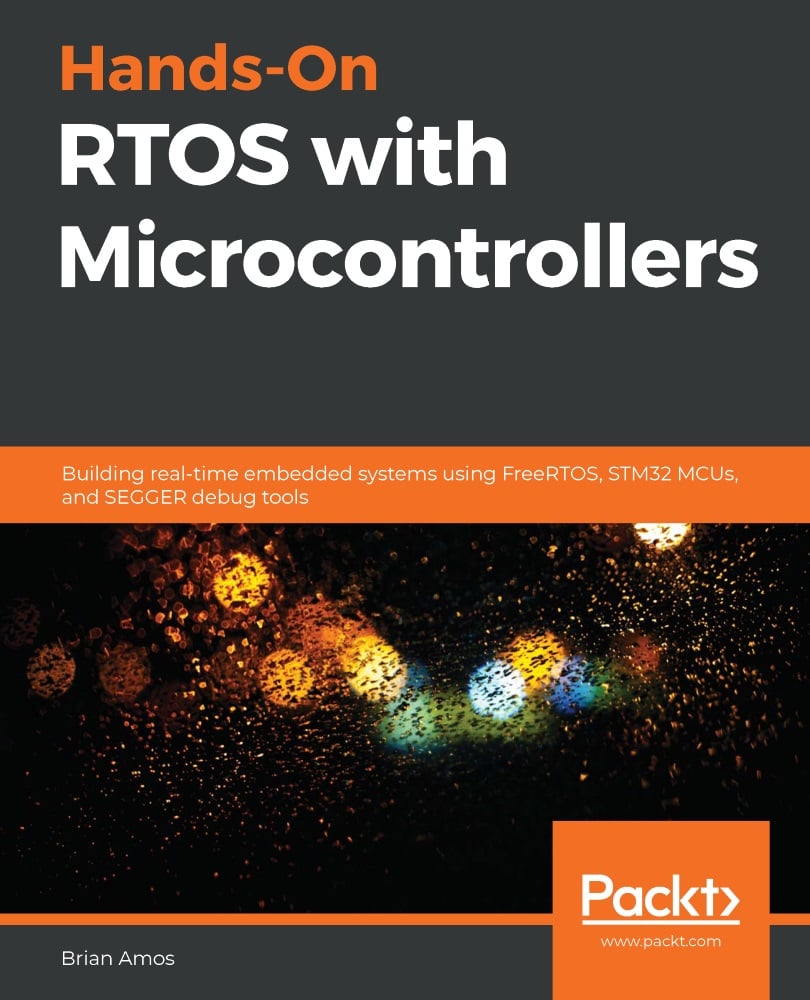 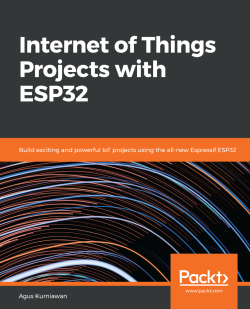