Microsoft Azure has numerous effective solutions that shape the future of any business. However, the major challenge that architects and administrators face are implementing these solutions appropriately.

Our book focuses on various implementation scenarios that will help overcome the challenge of implementing Azure’s solutions in a very efficient manner and will also help you to prepare for Microsoft Architect exam. You will not only learn how to secure a newly deployed Azure Active Directory but also get to know how Azure Active Directory Synchronization could be implemented.

By the end, you will be able to implement Azure solutions such as networking, storage, and cloud effectively.


Chapter 1. Getting Started with Azure Implementation

Cloud services have come a long way in the last 5 to 10 years. Cloud was and still is one of the biggest trends in Information Technology (IT), with new topics still to be discovered.

In the early 2000s, cloud computing wasn't a widely used phrase, but the concept as well as data centers with massive computing power were already existent and used. Later in that decade, the word cloud became a buzzword for nearly anything that was not tangible or online. But the real rise of cloud computing with all its different service models happened before, when the big IT companies started their cloud offers. That was Amazon, Google, and Microsoft in particular. As the cloud offers developed, they enabled companies from startups to Fortune 500s to use cloud services, from web services to virtual machines with billing exact to the minute.

In this chapter, we'll explore the following topics:

Cloud computing the new trend model for enabling workloads, that use resources from a a normally extreme huge resource pool, that is operated by a cloud service provider. These resources include servers, storage, network resources, applications, services or even functions. These can be rapidly deployed, operated and automated with a low effort and the prices are calculated on a minute base. This cloud model is composed of five essential characteristics, three service models, and four deployment models.

Cloud offers are mainly categorized into the following service models:

A comparison of service model responsibilities is as follows:

Below is a comparison between a related example, in this case between Azure (Public Cloud) and Azure Pack (Private Cloud): 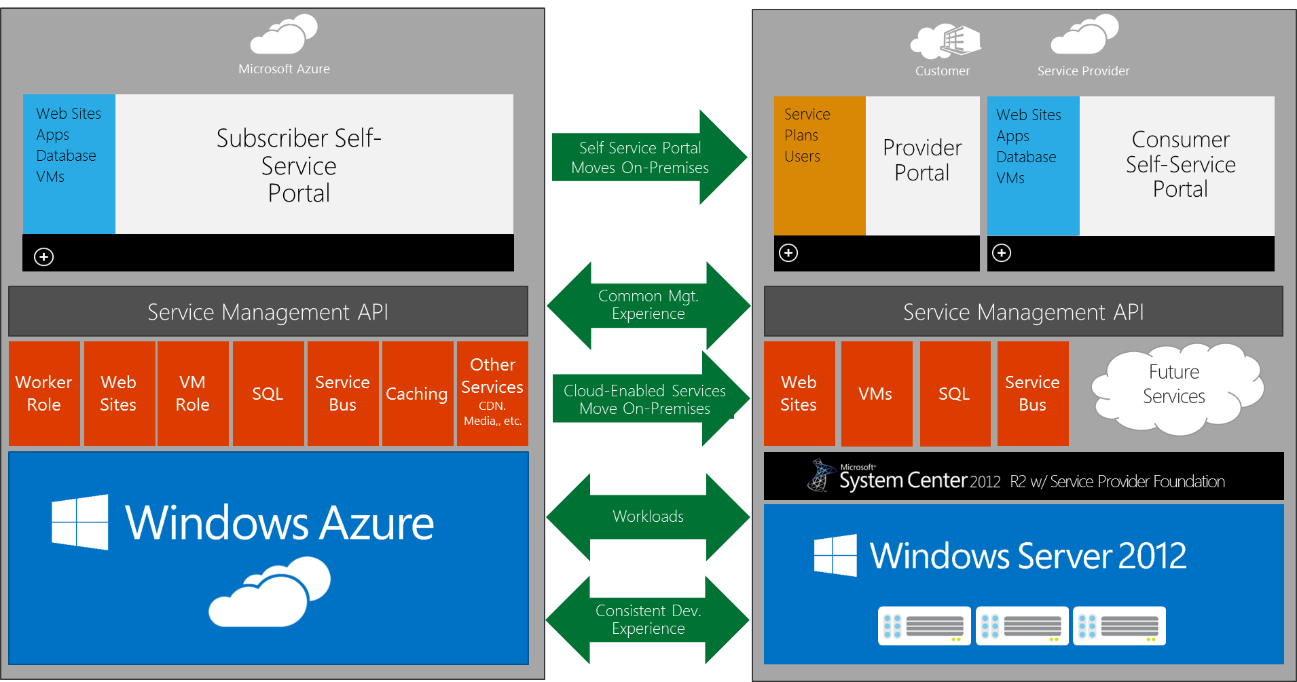 Microsoft Azure is one of the biggest cloud service providers worldwide, offering a wide range of services from IaaS to PaaS to SaaS. It fulfills all the characteristics that the National Institute of Standards and Technology (NIST) describes for cloud computing. These are as follows:

When Windows Azure came online to the general public in February 2010 there were solely database services, websites, and virtual machine hosting available. Over time, Microsoft constantly added features and new services to Azure, and, as there were more and more offers for Linux and other non-Windows services, Microsoft decided in April 2014 to rename Windows Azure as Microsoft Azure. This supported Microsoft's commitment to transform itself into a services company, which means that, in order to be successful, you have to offer as many services as possible to as many clients as possible. Since then, Microsoft has constantly improved and released new services. Additionally, it constantly builds and expand its data centers all over the world.

The service updates happen very frequently. That is the reason why you need to keep yourself informed. For example, the database offer you are using could have improved storage or performance capabilities. Information sources are the official Microsoft Azure Blog and the Azure Twitter channel. Furthermore, information can be found on the websites of several Azure MVPs.

Azure offers many services in its cloud computing platform. These services include the following: 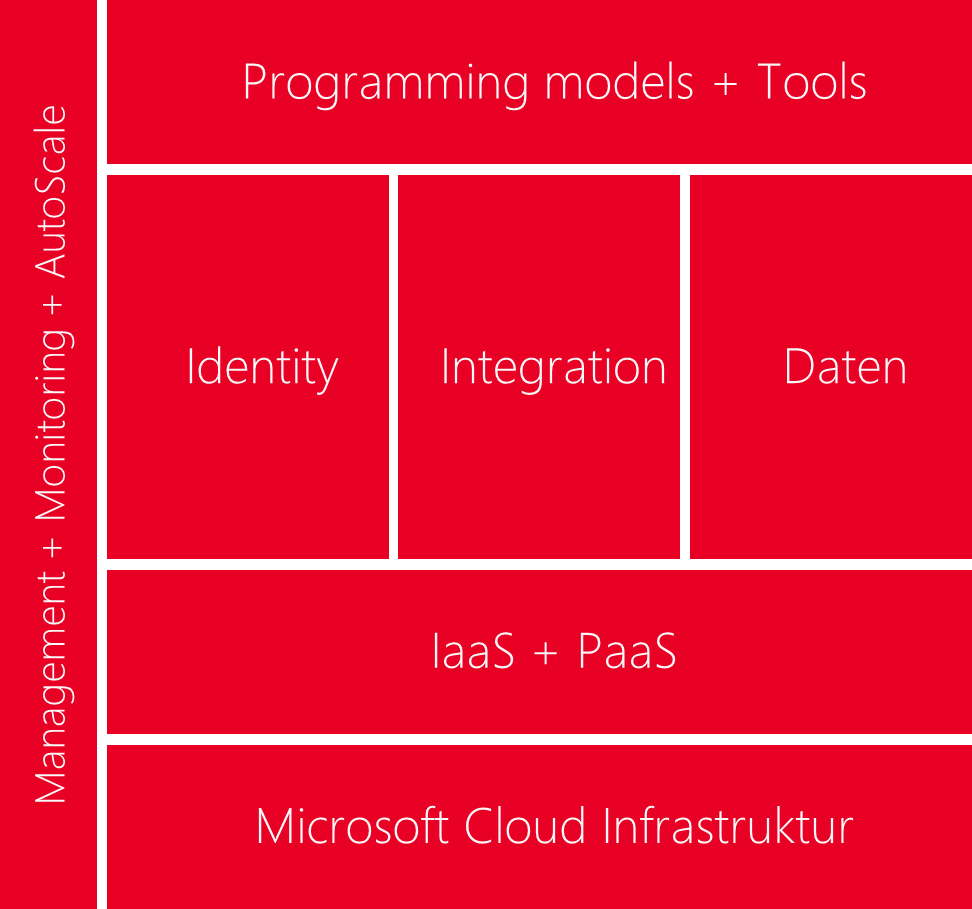 The service categories, differentiated between platform services and infrastructure services, are as follows:

The important thing is to remember that we are talking about a rapidly changing and very agile cloud computing platform. After this chapter, if you have not already done so, you should start using Azure by experimenting, exploring, and implementing your solutions, while reading the correlating chapters.

For testing purposes, you should use the Azure Free Trial (https://azure.microsoft.com/en-in/offers/ms-azr-0044p/‎), Visual Studio Dev Essentials (https://www.visualstudio.com/dev-essentials/) or the included Azure amount from a MSDN subscription.

In the following section, we will take a look at the basic Microsoft Azure key concepts. This should provide an overview and an idea of how to use Azure.

In the previous major version of Azure, a deployment backend model called Azure Service Manager (ASM) was used. With higher demand on scaling, being more flexible and more standardized a new model called the ARM was introduced and is now the standard way of using Azure.

This includes a new portal, a new way of looking at things as resources and a standardized API that every tool, including the Azure portal, that interacts with Azure uses.

With this API and architectural changes, it's possible to use such things as Azure Resource Manager templates for any size of deployment. ARM templates are written in JavaScript Object Notation (JSON) and are a convenient way to define one or more resources and their relationship to another programmatically. This structure is then deployed to a resource group. With this deployment model, it’s possible to define dependencies between resources as well as being able to deploy the exact same architecture again and again. The next part will dive a little deeper into resources.

Azure resources are the key to every service offering in Azure. Resources are the smallest building blocks and represent a single technical entity like a VM, a Network Interface Card, a storage account, database or a website.

When deploying a web app, a resource called App service will be deployed along with a service plan for billing.

When deploying a Virtual Machine from Azure Marketplace template a VM resource will be created as well as a storage account resource holding the virtual hard disks, a Public IP Address resource for initial access to the VM, a Network Interface card and a Virtual Network resource.

Azure as a global cloud platform provides multiple regions to deploy resources at. One region consists of at least one highly available data center or data center complex.

The (at the time of writing) 34 regions are distributed all over the world and include community clouds like Azure Germany or government clouds like US Gov Virginia. Additionally, to the implicit high availability inside a region and a data center, it’s possible to select a region and creation of most resources. This region represents a set of data centers that are connected through Microsoft owned high-speed network to replicate the data in near real-time between the specific data centers.

Regions can also have an impact on the performance and availability of some resources. Some services may be not or only partially available in a specific region.

The costs of offered services also vary by region. For reduced latency, it's recommended to choose a region next to the physical location of the consumer. It might also be important which legal requirements must be met. This could, for example, result in a deployment only in EU regions or even regions in specific countries.

The Azure Portal is a web application and the most straightforward way to view and manage most Azure resources. The Azure portal can also be used for identity management, to view billing information and to create custom dashboards for often used resources to get a quick overview of some deployments.

Although it’s easy to start with using and deploying services and resources, it’s highly recommended to use some Azure Automation technologies for larger and production environments.

The Azure portal is located at https://portal.azure.com.

Azure automation is a service and a resource as well an Azure concept in the context of cloud computing.

It’s very important to see automation as an essential concept when it comes to cloud computing. Automation is one of the key technologies to reduce operational costs and will also provide a consistent and replicable state. It also lays the foundation to any rapid deployment plans.

As Azure uses very much automation internally, Microsoft decided to make some of that technology available as a resource called automation account.

Azure provides several ways of interacting and automating things. The two main ways to interact with Azure besides the portal are the Azure PowerShell and the Azure Command-Line Interface (CLI).

Both are basically just wrappers around the Azure API to enable everyone not familiar with REST APIs, but their specific scripting language to use and automate Azure.The Azure PowerShell module provides cmdlets for managing Azure services and resources through the Azure API. Azure PowerShell cmdlets are used to handle Account management and Environment management like creating, updating and deleting resources.

Azure PowerShell open source and maintained by Microsoft. The project is available on GitHub at the following link:https://github.com/Azure/azure-powershellThe Azure CLI is a tool that you can use to create, manage, and remove Azure resources from the command-line. The Azure CLI was created for administrators and operators that are not that experienced with Microsoft technologies, but with other Server technologies like Unix or Linux.

The Azure CLI is an open source project as well and is available for Linux, macOS, and Windows here:

All Azure Services, including the Azure Management Portal, provide their own REST APIs for their functionality. They can, therefore, be accessed by any application that RESTful Services can process.

In order for software developers to write applications in the programming language of their choice, Microsoft offers wrapper classes for the REST APIs.

These are available as a so-called Azure SDK for numerous programming languages (for example, .NET, Java, Node.js) here:

In the last chapter, we learned that the classic model had changed a lot. In the classic world, you had complete control over the hardware and software that is deployed. This has led to hardware decisions that focus on massive scaling. An example is purchasing a server with more cores to satisfy peak performance needs. Unfortunately, this infrastructure might be underutilized outside the demand window. With Azure, you can deploy only the infrastructure that you need, and adjust this up or down at any time. This leads to a focus on scaling out through the deployment of additional compute nodes to satisfy a performance need. Although this has consequences for designing an appropriate software architecture. These days it's sure that scaling out cloud services is more cost-saving than scaling up through racks and servers.

Microsoft has built many Azure datacenters around the globe. There are even more planned, especially sovereign clouds in regions like China and Germany. Only the largest global enterprises can deploy datacenters in this manner, so using Azure makes it easy for enterprises of any size to deploy their services close to their customers.

For small businesses, Azure allows for a low-cost entry point, with the ability to scale on demand. This prevents a large capital investment in infrastructure and provides the flexibility to architect and re-architect systems as needed. Using cloud technologies supports the startup mentality of growing fast and failing fast.

In the next chapter, we will take a look at Azure Resource Manager and the Azure resource manager tools.

Packt reduced the price of the ebook i purchased to 50% within two days after i bought it. I was hoping to make use of the price slash to get the printed version and the customer support never helped until th e price went back to its full !!!! They just need your money 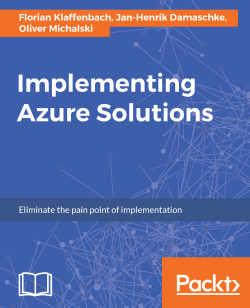