With an example-oriented approach, this book begins by providing you with a step-by-step learning process to effortlessly set up HBase clusters and design schemas. Gradually, you will be taken through advanced data modeling concepts and the intricacies of the HBase architecture. Moreover, you will also get acquainted with the HBase client API and HBase shell. Essentially, this book aims to provide you with a solid grounding in the NoSQL columnar database space and also helps you take advantage of the real power of HBase using data scans, filters, and the MapReduce framework. Most importantly, the book also provides you with practical use cases covering various HBase clients, HBase cluster administration, and performance tuning.

A relational database management system (RDBMS) is the right choice for most of the online transactional processing (OLTP) applications, and it also supports most of the online analytical processing (OLAP) systems. Large OLAP systems usually run very large queries that scan a wide set of records or an entire dataset containing billions of records (terabytes or petabytes in size) and face scaling issues. To address scaling issues using RDBMS, a huge investment becomes another point of concern.

The world of Big Data

Since the last decade, the amount of data being created is more than 20 terabytes per second and this size is only increasing. Not only volume and velocity but this data is also of a different variety, that is, structured and semi structured in nature, which means that data might be coming from blog posts, tweets, social network interactions, photos, videos, continuously generated log messages about what users are doing, and so on. Hence, Big Data is a combination of transactional data and interactive data. This large set of data is further used by organizations for decision making. Storing, analyzing, and summarizing these large datasets efficiently and cost effectively have become among the biggest challenges for these organizations.

For processing Big Data, platforms such as Hadoop, which inherits the basics from both GFS and MR, were developed and contributed to the community. A Hadoop-based platform is able to store and process continuously growing data in terabytes or petabytes.

The Apache Hadoop software library is a framework that allows the distributed processing of large datasets across clusters of computers.

However, Hadoop is designed to process data in the batch mode and the ability to access data randomly and near real time is completely missing. In Hadoop, processing smaller files has a larger overhead compared to big files and thus is a bad choice for low latency queries.

Later, a database solution called NoSQL evolved with multiple flavors, such as a key-value store, document-based store, column-based store, and graph-based store. NoSQL databases are suitable for different business requirements. Not only do these different flavors address scalability and availability but also take care of highly efficient read/write with data growing infinitely or, in short, Big Data.

The NoSQL database provides a fail-safe mechanism for the storage and retrieval of data that is modeled in it, somewhat different from the tabular relations used in many relational databases.

The origin of HBase

Looking at the limitations of GFS and MR, Google approached another solution, which not only uses GFS for data storage but it is also used for processing the smaller data files very efficiently. They called this new solution BigTable.

BigTable is a distributed storage system for managing structured data that is designed to scale to a very large size: petabytes of data across thousands of commodity servers.

Welcome to the world of HBase, http://hbase.apache.org/. HBase is a NoSQL database that primarily works on top of Hadoop. HBase is based on the storage architecture followed by the BigTable. HBase inherits the storage design from the column-oriented databases and the data access design from the keyvalue store databases where a key-based access to a specific cell of data is provided.

In column-oriented databases, data grouped by columns and column values is stored contiguously on a disk. Such a design is highly I/O effective when dealing with very large data sets used for analytical queries where not all the columns are needed.

HBase can be defined as a sparse, distributed, persistent, multidimensional sorted map, which is indexed by a row key, column key, and timestamp. HBase is designed to run on a cluster of commodity hardware and stores both structured and semi-structured data. HBase has the ability to scale horizontally as you add more machines to the cluster.

Use cases of HBase

There are a number of use cases where HBase can be a storage system. This section discusses a few of the popular use cases for HBase and the well-known companies that have adopted HBase. Let's discuss the use cases first:

Some of the companies that are using HBase in their respective use cases are as follows:

The source for the preceding mentioned information is http://wiki.apache.org/hadoop/Hbase/PoweredBy.

This book only focuses on HBase Version 0.98.7, as this version is fully supported and tested with Hadoop Versions 2.x and deprecates the use of Hadoop 1.x.

Hadoop 2.x is much faster compared to Hadoop 1.x and includes important bug fixes that will improve the overall HBase performance.

Older versions, 0.96.x, of HBase which are now extinct, supported both versions of Hadoop (1.x and 2.x). The HBase version prior to 0.96.x only supported Hadoop 1.x.

HBase is designed and developed to work on kernel-based operating systems; hence, the commands referred to in this book are only for a kernel-based OS, for example, CentOS. In the case of Windows, it is recommended that you have a CentOS-based virtual machine to play with HBase.

An HBase cluster requires only Oracle Java to be installed on all the machines that are part of the cluster. In case any other flavor of Java, such as OpenJDK, is installed with the operating system, it needs to be uninstalled first before installing Oracle Java. HBase and other components such as Hadoop and ZooKeeper require a minimum of Java 6 or later.

Perform the following steps for installing Java 1.7 or later:

The local or standalone mode means running all HBase services in just one Java process. Setting up HBase in the local mode is the easiest way to get started with HBase and can be used to explore further or for local development. The only step required is to download the recent release of HBase and unpack the archive (.tar) in some directory such as /opt. Perform the following steps to set up HBase in the local mode:

HBase also comes with a preinstalled web-based management console that can be accessed using http://localhost:60010. By default, it is deployed on HBase's Master host at port 60010. This UI provides information about various components such as region servers, tables, running tasks, logs, and so on, as shown in the following screenshot: 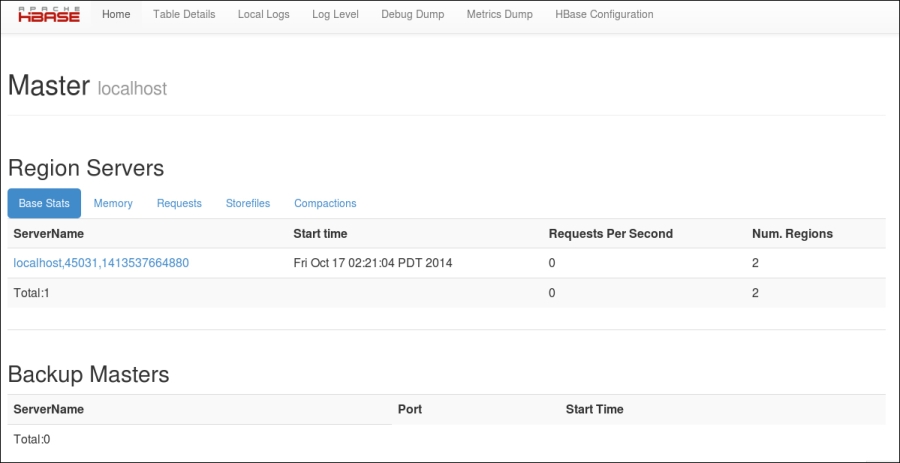 The HBase tables and monitored tasks are shown in the following screenshot:

The following screenshot displays information about the HBase attributes, provided by the UI:

Once the HBase setup is done correctly, the following directories are created in a local filesystem, as shown in the following screenshot: 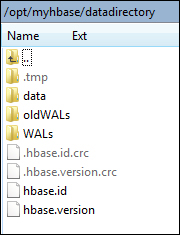 The standalone/local mode is only useful for basic operations and is not at all suitable for real-world workloads. In the pseudo-distributed mode, all HBase services (HMaster, HRegionServer, and Zookeeper) run as separate Java processes on a single machine. This mode can be useful during the testing phase.

Once the settings are done, we can use the following command to start HBase:

Before starting HBase, make sure that the Hadoop services are running and working fine.

Once HBase is configured correctly, the jps command should show the HMaster and HRegionServer processes running along with the Hadoop processes. Use the hadoop fs command in Hadoop's bin/ directory to list the directories created in HDFS as follows:

This book does not touch upon information on building a fully distributed HBase cluster and also does not talk about the hardware considerations, such as, server configurations, network settings, and so on; and software considerations, such as server OS setting, Hadoop settings, and so on. For this book, it is recommended that you use either the local mode or the pseudo-distributed mode.

For understanding this mode in depth, the building blocks that play a vital role in a fully distributed HBase cluster need to be understood well. The next section will give you a glimpse of what these components are.

In fully distributed and pseudo-distributed modes, a HBase cluster has many components such as HBase Master, ZooKeeper, RegionServers, HDFS DataNodes, and so on, discussed as follows:

Apart from the mentioned components, there are other considerations as well, such as hardware and software considerations, that are not within the scope of this book.

The backup HBase Master server and the additional region servers can be started in the pseudo-distributed mode using the utility provided bin directory as follows:

Now that we have everything installed and running, let's start playing with it and try out a few commands to get a feel of HBase. HBase comes with a command-line interface that works for both local and distributed modes. The HBase shell is developed in JRuby and can run in both interactive (recommended for simple commands) and batch modes (recommended for running shell script programs). Let's start the HBase shell in the interactive mode as follows:

Type help and click on return to see a listing of the available shell commands and their options. Remember that all the commands are case-sensitive.

The following is a list of some simple commands to get your hands dirty with HBase:

Refer to the following link for more commands: http://wiki.apache.org/hadoop/Hbase/Shell

In this chapter, we started our journey by understanding what the NoSQL world is and then got introduced to HBase. We also learned how to install Apache HBase 0.98.7 and also set up an HBase cluster in different possible modes. Finally, we tried a few commands using the HBase command-line interface HBase shell. In the next chapter, we will take a look at the key concepts of HBase.

Excellent discussion of the tool and its architecture 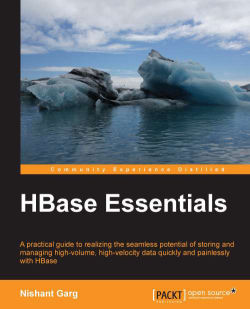