The GIMP (GNU Image Manipulation Program) is a freely distributed piece of software for such tasks as photo retouching, image composition, and image authoring, and is a viewed by many as a rival to commercial applications like Photoshop. The GIMP is one of Open Source's legendary applications – renowned for its power and flexibility, but daunting to new users and with a steep learning curve to mastery.

This book is packed with answers to get you preparing great images with the GMP immediately. Even if you are a relative novice to this powerhouse application, the straightforward instructions will guide you through the tasks to unleash your true creativity without being hindered by the system.

GIMP 2.6 Cookbook begins with simple tasks like drawing and painting and then moves into the deeper and more rewarding areas of filters, effects, text, and fonts. You will learn how to create fantastic logos, scintillating effects, and beautiful backgrounds. Experiment with color and sharpness and also create a web design layout for your website. Imagine how great you will feel when you are equipped to create wonderful images that can give your website a much-deserved makeover.

This chapter is about drawing and painting with GIMP; two of the most basic and fun steps in illustration. (you should have fun if you want to work as an artist!)

We are going to start with the basic tools, and then increase the number of elements and their complexity to get to the final piece.

So, what's an orb? Basically, it's a sphere that we're going to paint and make it look like a glossy surface. It's a good introduction to a series of GIMP tools, how to paint and draw, and also to the kind of images you're likely to use on a typical business web page.

Don't try to replicate what you see here, experiment while you learn from these examples. See how changing values, sizes, colors, and other attributes makes that piece you are creating your own. Create your style while learning how to do things.

An orb can be created by following these steps. We'll also give it a glossy surface and the shading that goes with it:

Let's create some reflections. In a new layer, create a small circle around the top centre part of the sphere, select the Bucket Fill Tool (Shift + B), and fill it with a white color. Change its opacity to something around 10: 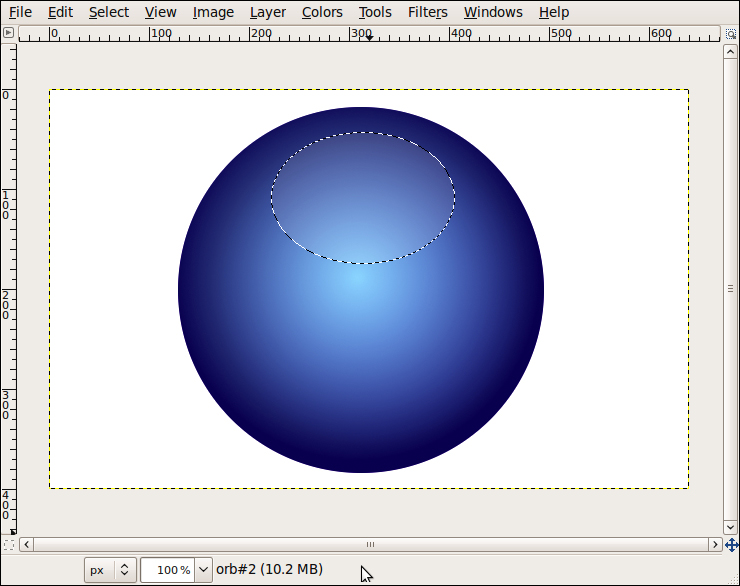 Right-click the orb2 layer and from the dropbox select alpha to selection. Create a new layer, and drag it to the top of the layer list so we can create a reflection on top of the sphere. Now select the Ellipse Select Tool, and set it to subtract mode:

Draw a big ellipse around the sphere leaving only a small part at the bottom, as shown here: 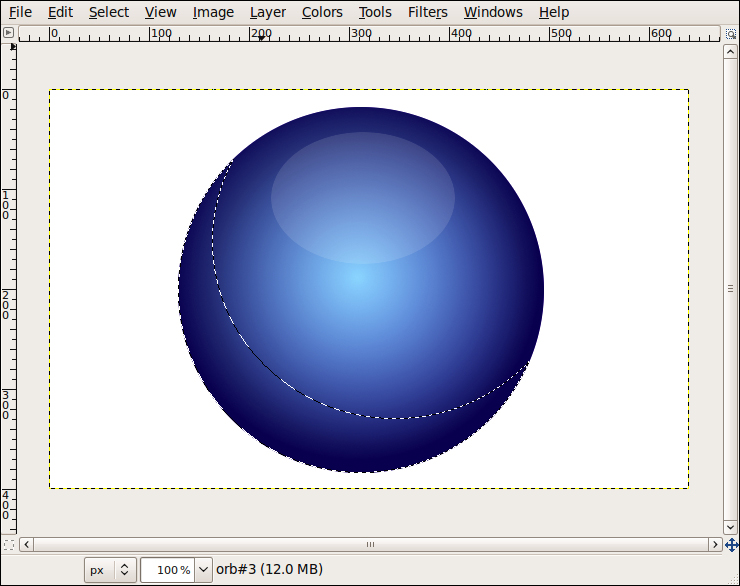 Then, in a new layer fill, this selection with white, and change its opacity to something around 5: 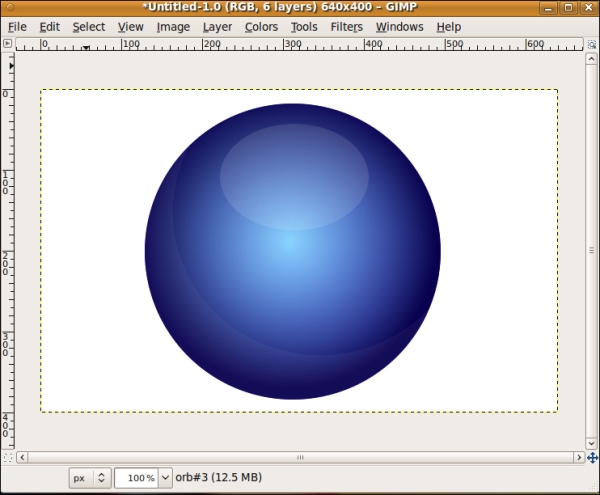 Now, with the Ellipse Select Tool, in a new layer, draw another small circle around the top right side of the sphere, smaller than the previous one. Then set the tool options to subtract, and deselect the bottom part of the small ellipse you just created (just draw another ellipse near the bottom part with the subtract mode selected). Then, fill it with white color: 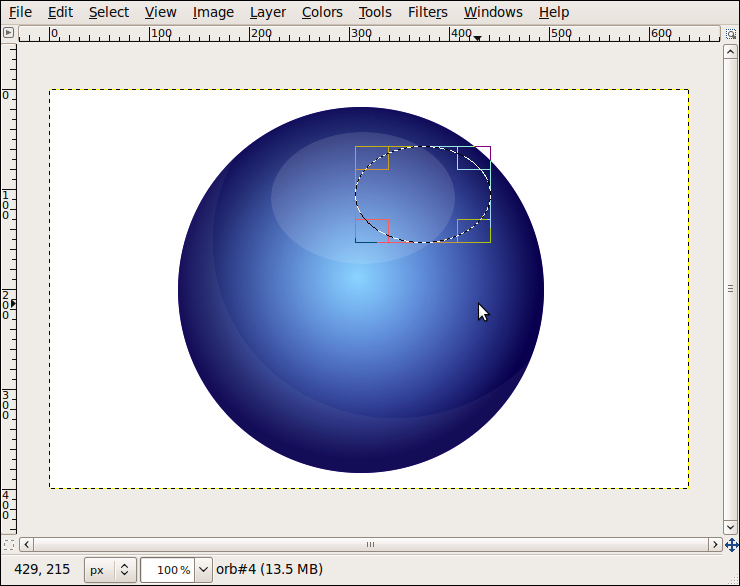 Then, move and rotate the selection, combining the Move Tool (M) and the Rotate Tool (Shift + R) until it looks as follows: 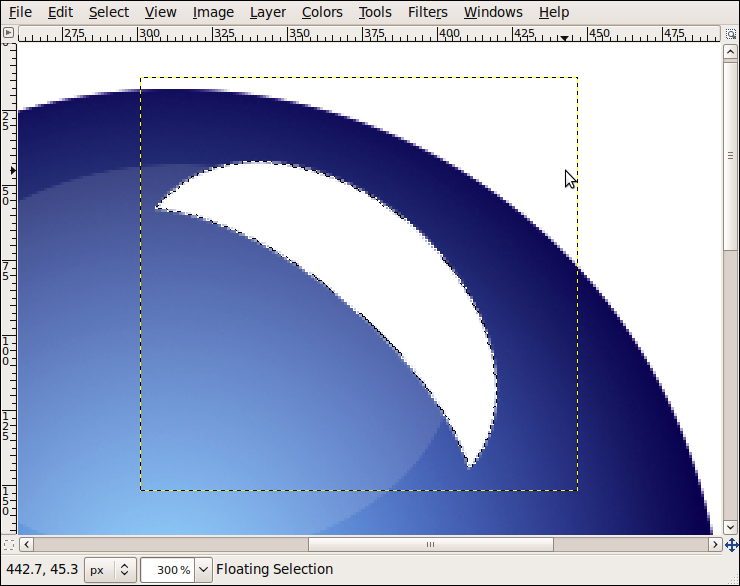 You can also use the Zoom Tool (Z) to zoom in and out of the file if you want to work with more accuracy.

Now, select the Paths Tool (B) and draw a small figure, as shown in the following screenshot, to give the impression of a reflection. Then, click on the Selection from Path button inside the tool options of the Paths Tool. You can also use the Enter key to complete a path selection: 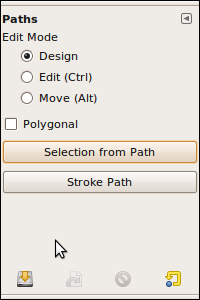 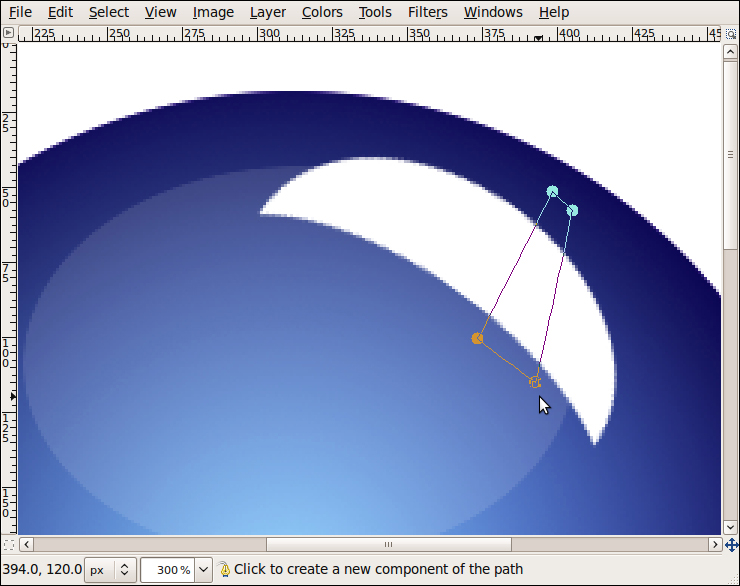 Then, you can press Delete to erase the selection and change the layer's opacity to something around 7.

We're done now; your orb should look like the following: 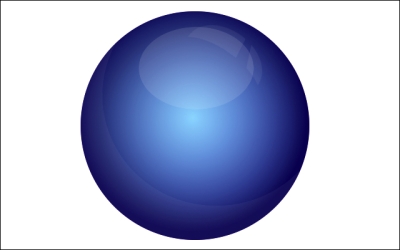 There are many techniques on how to blend and mix colors, both on the digital and the analogue world of paper and pencil. Here, I present to you a quick way to blend any combination of colors; of course, you will need some practice to master it, but following it you'll also take command of a few more tools of GIMP.

To blend two distinct colors carry out the following steps: 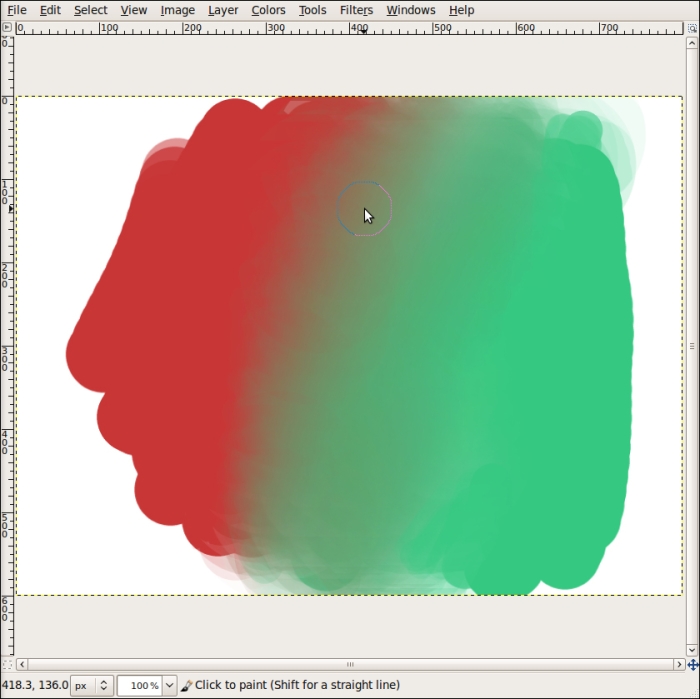 How to paint a sky and clouds

Painting the sky is a great way to apply several techniques and continue mastering GIMP tools. If you can paint while actually watching the sky, you will develop the speed and ability to create and not only copy, something that is essential to any artist looking for his/her own style.

Follow these simple steps to create a beautiful skyscape:

From sketch to finished piece: creating a cartoon of yourself

The design of a person's cartoon is based on his/her physical characteristics. This doesn't mean you should draw exaggerated features, or at least, not always. From my point of view, to draw a cartoon of any real person, I consider not only his/her characteristics, but also knowing him as a person. Chat for at least a couple of minutes, know their tone of voice, their body language, and then, just then, put everything into consideration, and start sketching, even while talking. Also, you should be careful what you exaggerate, some people may get angry or sad if you make a nose bigger or smaller, a chest or a belly too big or too small.

As I have said previously, don't try to copy what you see here, my goal is to show you how to create a cartoon using a computer programâ€”GIMP, in this case. So, experiment, and if you get frustrated, just get a cup of tea, come back in ten minutes and continue practising until you are happy with what you see.

Sometimes, inspiration or ideas don't come easy. Sometimes, you keep looking at your model or landscape and you can't start working on that white page that is starting to look bigger and bigger. Sketching, scribbling and doodling are the most natural ways for me to start working when I have a shortage of ideas. Just grab a pen, a pencil, anything, and a piece of paper, and start moving your hand. It won't be long (usually!) until you find shapes and textures that give you that wonderful idea. That's why most of the time I start my illustrations on a piece of paper. Of course you could also sketch, scribble, or doodle in a computer screen and GIMP!

To give your picture a more standard, professional look, you should trace the pencil outlines (or even your digital sketch) and give it a smoother look. Lines should flow, giving the impression the outlines are made in a single try, with no rough edges and unions.

As I said, what we have seen is just a standard. In my opinion, you should look for your own style, and try to use it with your clients. I mean, most of the time I draw my own outlines on paper, or just trace them with a modulated brush (you'll need a tablet for that) after cleaning the sketch. However, this is not the case many times, so here, I'm giving you the steps to create clean outlines:

Be careful with shadows. Try to make them consistent with the light source, or if you don't want to do that, make them very inconsistent, so as to not give a chance to the observer to think that you made a mistake while drawing. In my case, light should come from the back of the character, but I always prefer to introduce a little confusion and paint shadows that give the character a stranger appearance. 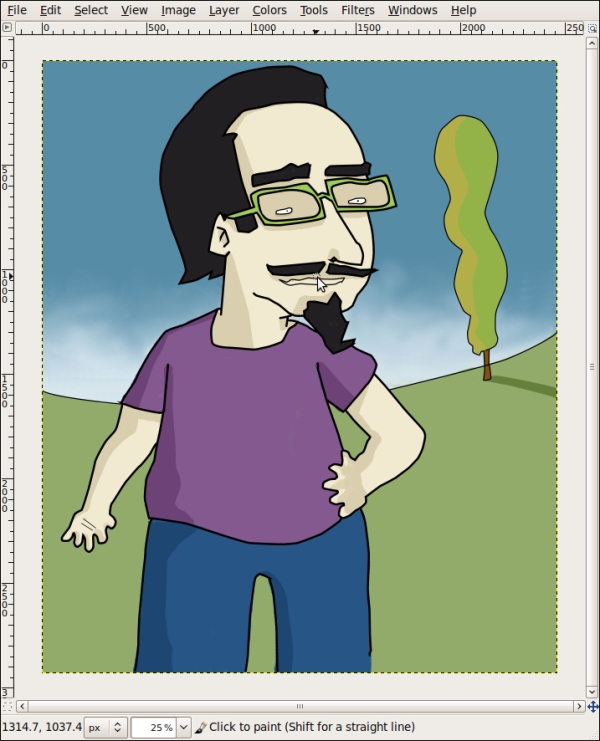 You can consider your picture finished, but you can always experiment a little more! In my case, I like to play with textures, I'm always putting strange things in my scanner to create weird textures that give any illustration the strange, worn out, vintage, retro, grunge style that I like!

Here is my final piece: 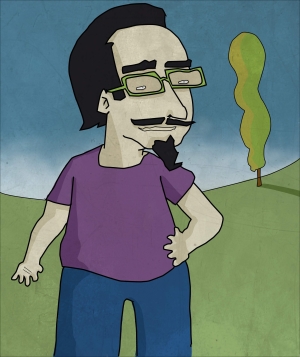 Bought to get help to understand Gimp