XenApp is the leader in application hosting and virtualization delivery, allowing users from different platforms such Windows, Mac, Linux, and mobile devices to connect to their business applications. Using XenApp, you can deploy secure applications quickly to thousands of users.

Getting Started with Citrix XenApp 6.5 provides comprehensive details on how to design, implement, and maintain Citrix farms based on XenApp 6.5. Additionally, you will learn to use management tools and scripts for daily tasks such as managing servers, published resources, printers, and connections.

Getting Started with Citrix XenApp 6.5 starts by introducing the basics and new features of the brand new version such as installing servers and configuring components, and then teaches you how to publish applications and resources on the client device before moving on to configuring content redirection.

Author Guillermo Musumeci includes a use case throughout the book to explain advanced topics like creating management scripts and deploying and optimizing XenApp for Citrix XenServer, VMware ESX, and Microsoft Hyper-V virtual machines. It will guide you through an unattended installation of XenApp and components on physical servers.

By the end of this book you will have enough knowledge to successfully design and manage your own XenApp 6.5 Farms.


Chapter 1. Getting Started with Citrix XenApp 6.5

Citrix XenApp is the leader of application virtualization or application delivery. Several years ago, when the word Virtualization didn't exist, people used to talk about application hosting. Citrix was founded in 1989 and they developed the first successful product in 1993 called WinView. It provided remote access to DOS and Windows 3.1 applications on a multi-user platform. Citrix licensed Microsoft's Windows NT 3.51 source code from Microsoft; and in 1995 they shipped a multiuser version of Windows NT based on the MultiWin engine, known as WinFrame. This allowed multiple users to logon and execute applications on a WinFrame server. In 1996 Citrix licensed the MultiWin technology to Microsoft, establishing the foundation of Microsoft's Terminal Services.

I remember perfectly the first time I was in touch with application hosting was in 1997, and I was working at Microsoft in Argentina as Technical Support Engineer. I was invited for MCSE certification training on a Saturday morning. We had been building a lab with several machines, when I saw several Microsoft Beta CDs on a table.

I took one of them called Hydra and I asked the guy in charge of the training about it, and he told me that the CD contained an application to convert a Windows NT 4.0 into a sort of mainframe. I asked him if we could install it on a machine and he told me we did not have enough RAM to install it. I recall walking inside empty offices to open computers and remove the RAM so that we could install Hydra on a computer.

It was couple of years later, in 1999, when I discovered that Hydra is Windows 4.0 Terminal Server Edition. I was working with my first Citrix server and that was when I first fell in love with application hosting.

In this chapter we will learn:

When Citrix introduced XenApp 6.0 in March 2010, they rewrote the code completely for the Windows 64-bit platform (2008 R2). This job provided a great opportunity to optimize the code for performance and scalability and to provide new features. Now with XenApp 6.5, released in August 2011, Citrix has introduced more features, performance improvements and the new faster application launch.

XenApp 6.5 looks like an enhanced version of XenApp 6.0, but there are several differences in the farm architecture, so there is no direct upgrade from XenApp 6.0 to 6.5, forcing us to create a new farm for XenApp 6.5 servers.

Here are some of the highlights of the new XenApp 6.5:

In addition to these major features and enhancements, XenApp 6.5 includes other features like updated Web Interface, Single Sign-on and SmartAuditor enhancements, new 32-bit color support, Windows 7 smart card support, and so on.

This section provides summary descriptions of some of the most popular XenApp features. This section will help new Citrix customers to understand major features on last versions of XenApp (XenApp 4.5, 5.0, 6.0, and 6.5).

Until previous versions Citrix supported XenApp farms that contained different versions of Windows and/or of XenApp. XenApp 6.5 cannot co-exist with any previous versions in the same farm, even with XenApp 6.0. We can have two separated farms and use web interface to provide users access to both farms using one single interface.

We can keep XenApp 5.0 or 6.0 and 6.5 servers together on the same farm for a migration, but this is not recommended (and supported) by Citrix for a long term implementation.

During the wizard-based installation, the XenApp Server Role Manager automatically installs prerequisites for the selected roles. Also, we can choose to install XenApp from command-line installations or using unattended scripts. In that case, we must deploy the prerequisites before starting XenApp role installation.

We can use ServerManagerCmd.exe command, PowerShell cmdlets or Microsoft's DISM (Deployment Image Servicing and Management) tool to deploy prerequisites such as IIS or .NET Framework.

The XenApp Server Role Manager deploys the following software, if it is not already installed:

If the IIS role services are not installed, the Citrix XML Service IIS Integration component is not selected by default in the wizard-based installation. In this case, if we select the checkbox, the Server Role Manager installs the following IIS role services. (If we do not install these services, the Citrix XML Service defaults to standalone mode with its own port settings, which we can configure using the XenApp Server Configuration Tool.)

The following databases are supported for the data store:

The Citrix AppCenter, formerly known as Citrix Access Management Console in XenApp 4.5 and 5.0 and Citrix Delivery Services Console in XenApp 6.0, is a tool that integrates into the Microsoft Management Console (MMC) and enables us to execute management Using Citrix AppCenter. We can set up and monitor XenApp servers and farms, published resources and sessions, configure policies, and provide users access to applications.

If we want to administer multiples farms of the different XenApp versions, we need to install multiple versions of management consoles on the same computer.

We can install Citrix AppCenter Console or Citrix Delivery Services Console in the following operating systems:

Also, the XenApp Server Role Manager deploys the following software, if it is not already installed:

The Citrix License Server is a small component required in every XenApp deployment. It can be installed on a XenApp server or shared XenApp infrastructure server (more about this in the next chapter) for testing or smaller environments or on large environments, in one dedicated server.

Citrix licenses are required to allow users to connect to the XenApp farm.

We can download and install the latest Citrix License Server or use the version included on the ISO of XenApp 6.5. Minimum license server version number is 11.9.

We are going to install and configure the Citrix License Server in Chapter 3.

Citrix XenApp Receiver (formerly known as Citrix Plug-In and ICA Client) is a light software client that allows us to access published applications and desktops on XenApp farms and servers from almost any client device, including Windows and Macintosh computers and mobile devices such as Android and Blackberry phones, Apple iPhone and iPad devices.

We need to install the most recent version of any Citrix Receiver to guarantee availability of all features and functionality of XenApp 6.5 to our users. XenApp Receiver version 13.0 is the minimum version recommended to use all features of XenApp 6.5.

In this chapter, we learned some new features about XenApp 6.5. Specifically:

We discussed these new exciting features and in particular the Citrix AppCenter console, the 64-bit support, the new installation process using roles-based setup and more. Also, we enumerated system requirements.

In the next chapter, we are going to discuss how to design a XenApp 6.5 farm and how to implement some of these new features.

Good organization in the book and the writing is clear and understandable.

Great publication from a great author 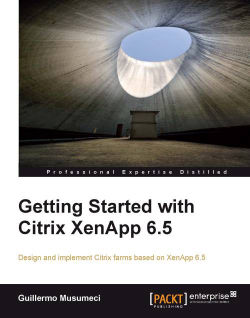