Beautiful Soup is a Python library designed for quick turnaround projects like screen-scraping. Beautiful Soup provides a few simple methods and Pythonic idioms for navigating, searching, and modifying a parse tree: a toolkit for dissecting a document and extracting what you need without writing excess code for an application. It doesn't take much code to write an application using Beautiful Soup.

Getting Started with Beautiful Soup is a practical guide to Beautiful Soup using Python. The book starts by walking you through the installation of each and every feature of Beautiful Soup using simple examples which include sample Python codes as well as diagrams and screenshots wherever required for better understanding. The book discusses the problems of how exactly you can get data out of a website and provides an easy solution with the help of a real website and sample code.

Getting Started with Beautiful Soup goes over the different methods to install Beautiful Soup in both Linux and Windows systems. You will then learn about searching, navigating, content modification, encoding support, and output formatting with the help of examples and sample Python codes for each example so that you can try them out to get a better understanding. This book is a practical guide for scraping information from any website. If you want to learn how to efficiently scrape pages from websites, then this book is for you.

Before we begin using Beautiful Soup, we should ensure that it is properly installed on our machine. The steps required are so simple that any user can install this in no time. In this chapter, we will be covering the following topics:

Python supports the installation of third-party modules such as Beautiful Soup. In the best case scenario, we can expect that the module developer might have prepared a platform-specific installer, for example, an executable installer, in the case of Windows; an rpm package, in the case of Red Hat-based Linux operating systems (Red Hat, Open Suse, and so on); and a Debian package, in the case of Debian-based operating systems (Debian, Ubuntu, and so on). But this is not always the case and we should know the alternatives if the platform-specific installer is not available. We will discuss the different installation options available for Beautiful Soup in different operating systems, such as Linux, Windows, and Mac OS X. The Python version that we are going to use in the later examples for installing Beautiful Soup is Python 2.7.5 and the instructions for Python 3 are probably different. You can directly go to the installation section corresponding to the operating system.

Normally, these are the following three ways to install Beautiful Soup in Linux machines:

The choices are ranked depending on the complexity levels and to avoid the trial-and-error method. The easiest method is always using the package manager since it requires less effort from the user, so we will cover this first. If the installation is successful in one step, we don't need to do the next because the three steps mentioned previously do the same thing.

Just open up a terminal and type in the following command:

The preceding command will install Beautiful Soup Version 4 in our Linux operating system. Installing new packages in the system normally requires root user privileges, which is why we append sudo in front of the apt-get command. If we didn't append sudo, we will basically end up with a permission denied error. If the packages are already updated, we will see the following success message in the command line itself:

In the older versions of the Linux operating system, even after running the apt-get update command, we might not be able to install Beautiful Soup because it might not be available in the repositories. In these scenarios, we can rely on the other methods of installation using either pip or easy_install.

The pip and easy_install are the tools used for managing and installing Python packages. Either of them can be used to install Beautiful Soup.

From the terminal, type the following command:

The preceding command will install Beautiful Soup Version 4 in the system after downloading the necessary packages from http://pypi.python.org/.

The easy_install tool installs the package from Python Package Index (PyPI). So, in the terminal, type the following command:

In Windows, we will make use of the recent Python package for Beautiful Soup available from https://pypi.python.org/packages/source/b/beautifulsoup4/ and use the setup.py script to install Beautiful Soup. But before doing this, it will be easier for us if we add the path of Python in the system path. The next section discusses setting up the path to Python on a Windows machine.

Often, the path to python.exe will not be added to an environment variable by default in Windows. So, in order to check this from the Windows command-line prompt, you need to type the following command:

The preceding command will work without any errors if the path to Python is already added in the environment path variable or we are already within the Python installed directory. But, it would be good to check the path variable for the Python directory entry.

If it doesn't exist in the path variable, we have to find out the actual path, which is entirely dependent on where you installed Python. For Python 2.x, it will be by C:\Python2x by default, and for Python 3.x, the path will be C:\Python3x by default.

We have to add this to the Path environment variable in the Windows machine. For this, right-click on My Computer | Properties | Environment Variables | System Variable.

This is shown in the following screenshot: 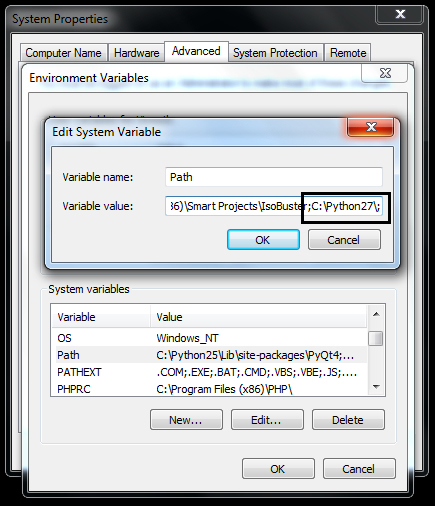 Adding Python path in Windows (Python 2.7 is used in this example)

After the Python path is ready, we can follow the steps for installing Beautiful Soup on a Windows machine.

The method, which will be explained in the next section, of installing Beautiful Soup using setup.py is the same for Linux, Windows, and Mac OS X operating systems.

We can install Python packages using the setup.py script that comes with every Python package downloaded from the Python package index website: https://pypi.python.org/. The following steps are used to install the Beautiful Soup using setup.py:

The installation processes that we have discussed till now normally copy the module contents to a chosen installation directory. This varies from operating system to operating system and the path is normally /usr/local/lib/pythonX.Y/site-packages in Linux operating systems such as Debian and C:\PythonXY\Lib\site-packages in Windows (where X and Y represent the corresponding versions, such as Python 2.7). When we use import statements in the Python interpreter or as a part of a Python script, normally what the Python interpreter does is look in the predefined Python Path variable and look for the module in those directories. So, installing actually means copying the module contents into the predefined directory or copying this to some other location and adding the location into the Python path. The following method of using Beautiful Soup without going through the installation can be used in any operating system, such as Windows, Linux, or Mac OS X:

After we perform all the preceding steps, we are good to use Beautiful Soup. In order to import Beautiful Soup in this case, either we need to open the terminal in the directory where the bs4 directory exists or add this directory to the Python Path variable; otherwise, we will get the module not found error. This extra step is required because the method is specific to a project where the bs4 directory is included. But in the case of installing methods, as we have seen previously, Beautiful Soup will be available globally and can be used in any of the projects, and so the additional steps are not required.

To verify the installation, perform the following steps:

The following table is an overview of commands and their implications:

To difficult to order hard copy.

well written and clear, thanks 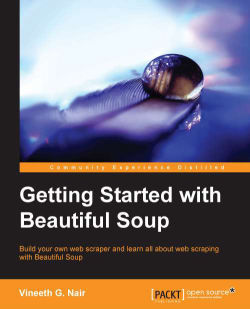