GameMaker: Studio is a great game engine that can be used to publish games to a variety of platforms. It is one of the most versatile game creation tools for professional and beginner game developers alike.

Starting with the basics of learning how to install GameMaker, this book will take you all the way through to publishing your games online. Compiled with detailed instructions and images, this book starts by showing you how the GameMaker: Studio interface looks and works. After this, you'll move on to learning about resources such as sprites, paths, sounds, and more available in GameMaker, and what each resource is used for. We then move into the GameMaker Language (GML) and learn programing techniques including how variables are set up and what functions are and how they work. You'll understand how to manipulate GameMaker resources using GML. Following this, you will then make your very first GameMaker game using a combination of resources and programing techniques, and learn how to advertise your game and generate revenue and publicity for it. You can then export and publish your games across desktop and mobile platforms.

In this chapter, you will learn what GameMaker is all about, who made it, what it is used for, and more. You will then also be learning how to install GameMaker on your computer that is ready for use.

Before getting started with GameMaker, it is best to know exactly what it is and what it's designed to do.

GameMaker is a 2D game creation software by YoYo Games. It was designed to allow anyone to easily develop games without having to learn complex programming languages such as C++ through the use of its drag and drop functionality.

The drag and drop functionality allows the user to create games by visually organizing icons on screen, which represent actions and statements that will occur during the game.

GameMaker also has a built-in programming language called GameMaker Language, or GML for short. GML allows users to type out code to be run during their game. All drag and drop actions are actually made up of this GML code.

There are a number of different versions of GameMaker available, most of which are unsupported because they are outdated; however, support can still be found in the GameMaker Community Forums. GameMaker: Studio is the first version of GameMaker after GameMaker HTML5 to allow users to create games and export them for use on multiple devices and operating systems including PC, Mac, Linux, and Android, on both mobile and desktop versions.

GameMaker: Studio is designed to allow one code base (GML) to run on any device with minimal changes to the base code. Users are able to export their games to run on any supported device or system such as HTML5 without changing any code to make things work.

GameMaker: Studio was also the first version available for download and use through the Steam marketplace. YoYo Games took advantage of the Steam workshop and allowed Steam-based users to post and share their creations through the service.

GameMaker: Studio is sold in a number of different versions, which include several enhanced features and capabilities as the price gets higher.

The standard version is free to download and use. However, it lacks some advanced features included in higher versions and only allows for exporting to the Windows desktop.

The professional version is the second cheapest from the standard version. It includes all features, but only has the Windows desktop and Windows app exports. Other exports can be purchased at an extra cost ranging from $99.99 to $300.

The master version is the most expensive of all the options. It comes with every feature and every export, including all future export modules in version 1.x. If you already own exports in the professional version, you can get the prices of those exports taken off the price of the master version.

From the site, you can pick the free version or purchase one of the others. All the installations are basically the same.

Once the installer is downloaded, we are ready to install GameMaker: Studio. This is just like installing any other program. Just run the file, and then follow the on-screen instructions to accept the license agreement, choose an install location, and install the software.

On the first run, you may see a progress bar appear at the top left of your screen. This is just GameMaker running its first time setup. It will also do this during the update process as YoYo Games releases new features.

Once it is done, you should see a welcome screen and will be prompted to enter your registration code. The key should be e-mailed to you when you make an account during the purchase/download process. Enter this key and your copy of GameMaker: Studio should be registered. You may be prompted to restart GameMaker at this time. Close GameMaker and re-open it and you should see the welcome screen and be able to choose from a number of options on it: 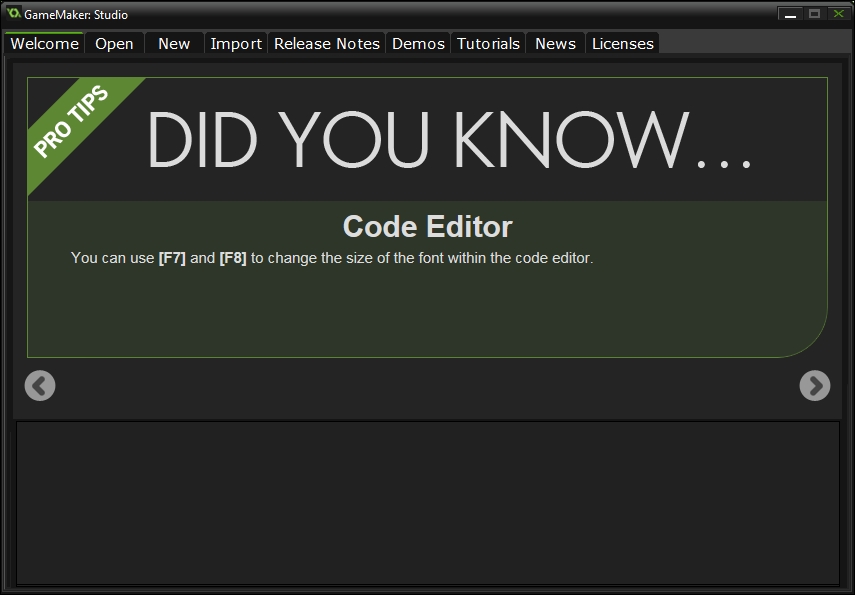 What is this book about?

We now have GameMaker: Studio installed and are ready to get started with it.

In this book, we will be covering the essential things to know about GameMaker: Studio. This includes everything from drag and drop actions to programming in GameMaker using GameMaker Language (GML). You will learn about how things in GameMaker are structured, and how to organize resources to keep things as clean as possible. By the end of the book, we would have made a simple functioning game and will be ready to get going with game development using GameMaker: Studio.

In this chapter, we looked into what GameMaker actually is and learned that there are different versions available. We also looked at the different types of GameMaker: Studio available for download and purchase. We then learned how to install GameMaker: Studio, which is the final step in getting ready to learn the essential skills and starting to make our very own games.

In the next chapter, we will look into creating a new project and the main interfaces of GameMaker: Studio. 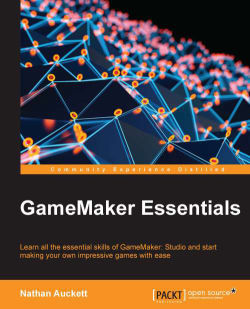