Over the past few years, DevOps has become the de facto approach for designing, building, and delivering software. Feature management is now extending the DevOps methodology to allow applications to change on demand and run experiments to validate the success of new features. If you want to make feature management happen, LaunchDarkly is the tool for you.

This book explains how feature management is key to building modern software systems. Starting with the basics of LaunchDarkly and configuring simple feature flags to turn features on and off, you'll learn how simple functionality can be applied in more powerful ways with percentage-based rollouts, experimentation, and switches. You'll see how feature management can change the way teams work and how large projects, including migrations, are planned. Finally, you'll discover various uses of every part of the tool to gain mastery of LaunchDarkly. This includes tips and tricks for experimentation, identifying groups and segments of users, and investigating and debugging issues with specific users and feature flag evaluations.

By the end of the book, you'll have gained a comprehensive understanding of LaunchDarkly, along with knowledge of the adoption of trunk-based development workflows and methods, multi-variant testing, and managing infrastructure changes and migrations.

Feature management and LaunchDarkly empower us to change systems quickly, easily, and without risk to help deliver new features, deal with service incidents, and migrate systems.

In this chapter, I will introduce you to, and briefly explain, the modern software development landscape with regard to best practices for DevOps and robust Continuous Integration/Continuous Delivery (CI/CD) pipelines and processes. Next, we will look at where feature management fits within this practice and how it can be embedded effectively and efficiently within CI/CD processes.

This context will lay the groundwork for this book to explain what feature management is, how best to use LaunchDarkly, and what can be achieved by adopting an approach to building software that relies on feature management.

By the end of this chapter, you will have a better understanding of how feature management fits within a modern approach to software delivery and how it can improve good DevOps and CI/CD practices.

Recent years have seen the move to a more modern approach to software development, with DevOps being increasingly used across many industries. DevOps is best described by Microsoft as the union of people, processes, and technology to continually provide value to customers.

DevOps has ushered in the era of working where teams are more empowered than ever before, with ownership across the whole development life cycle of both code and products. This includes managing the production environment, previously the domain of the Operations team. The annual State of DevOps Report (available in the Further reading section; registration is required) shows that teams adopting DevOps are delivering higher quality code faster and more reliably than ever before.

While there are other approaches to working with software, DevOps is perhaps the most popular and has proven success. I will assume that this approach is how you are building and deploying software too. Before explaining feature management or even getting started with LaunchDarkly, I want to share a brief overview of DevOps to highlight where feature management can really add value.

DevOps is not just a practice of writing code but a comprehensive approach to defining, designing, and delivering software. It can be defined into four key areas within the application life cycle: planning, developing, delivering, and operating. I will describe these areas within the context of where feature management can be factored in later:

The aforementioned phases of the DevOps life cycle are highly effective at improving the processes of software delivery but aren't the whole practice of DevOps. Next, we will look at the culture that needs to go alongside these stages to make DevOps truly effective.

Successfully adopting a good DevOps practice is more than just following processes and procedures. It is also about adopting a culture that allows constant improvements to be made to the methodology. Microsoft defines the DevOps culture as having four key areas (available in the Further reading section). Again, I will explain only the areas that come within the scope of feature management:

Next, we look into the four key DevOps metrics.

It is important to understand that a common way to measure how mature a team's DevOps practice is is with the four key metrics of DevOps (these are defined in State of DevOps 2019, which is available in the Further reading section):

The best performing teams achieve their reliable results by following both the DevOps life cycle and by having a good DevOps culture.

By using DevOps, software teams and companies have transformed how effective they are, but this practice alone does not solve problems, nor does it limit how new ideas can make this even more effective. One way in which DevOps can be enhanced further is with the ability to manage features within systems and applications, which we will look at in the next section. We will also examine how feature management can positively impact the four key DevOps metrics.

Where does feature management come from?

I will explain what feature management is in detail in the next chapter, but before that, I will talk broadly about how this approach can be applied to a modern DevOps way of working and how it fits within the DevOps life cycle. The idea of feature management in modern systems is self-explanatory – it is an approach to being able to manipulate components within a production system without performing any deployments. This change can be achieved safely and easily, without the need to change or release an application's code.

As we will see throughout this book, feature management can be used in several ways within systems to offer new ways of building and developing software. These include the following:

Now, let's look back over the key phases of the DevOps life cycle. Here, I will explain how they can be changed and improved by introducing feature management and its various implementations and use cases.

Let's look at how feature management can be employed within the DevOps life cycle to improve the way software is built and delivered:

Building on the understanding of how feature management can be used practically, I want to explain how it can positively impact the four key DevOps metrics I mentioned earlier:

From these basic examples, I hope you have a good sense of how feature management can help improve how software can be built and delivered, and some of the ways that its impact can be measured. Throughout this book, we will learn more about the value it can bring to teams and businesses.

With feature management, having its biggest impact within the delivering stage of the DevOps life cycle and with the expectation that most people are adopting CI/CD pipelines, I wanted to share a few things before we move on and look at feature management and LaunchDarkly.

I want to make it clear that feature management is not a replacement for good CI/CD processes – it is an enhancement of the CI/CD process that offers more control and opportunities to teams.

For some, the idea of changing features within a production system might seem to go against the merits of a good CI/CD pipeline, in that to get a deployment to the production environment, it must go through several quality gates before it is deemed good enough to be released. But, once in production, that system could be changed, and that leads to the question, if a release to production could change once deployed, do the quality gates matter so much? The quality gates do matter and are just as valuable as they would be without feature management. However, the difference is that all possible configurations of the service should be tested within those quality gates before a feature is deemed to be ready for customers. The ability to test all these variations provides the reassurance that whether a feature is on or off, your service will continue to work as expected.

These methodologies and processes can be implemented in other ways but adopting feature management can offer them all within one approach.

This chapter has given you an introduction to the modern approach to building software and how this can be achieved and measured. We have explored several approaches in which feature management can develop those practices and the tangible ways it can improve CI/CD pipelines and DevOps metrics.

With this knowledge, you should be able to appreciate how feature management can be valuable to the software development process. This, in turn, allows teams to benefit from more efficient practices and from building products with increased value for their customers and their business.

In the next chapter, I will explain how you can build on the DevOps methodology to building software, how you can get the most from feature management, and how you can use LaunchDarkly to make it happen.

To learn more about what was covered in this chapter, take a look at the following resources: 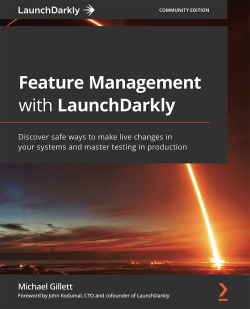