Python and R allow you to extend Power BI capabilities to simplify ingestion and transformation activities, enhance dashboards, and highlight insights. With this book, you'll be able to make your artifacts far more interesting and rich in insights using analytical languages.

You'll start by learning how to configure your Power BI environment to use your Python and R scripts. The book then explores data ingestion and data transformation extensions, and advances to focus on data augmentation and data visualization. You'll understand how to import data from external sources and transform them using complex algorithms. The book helps you implement personal data de-identification methods such as pseudonymization, anonymization, and masking in Power BI. You'll be able to call external APIs to enrich your data much more quickly using Python programming and R programming. Later, you'll learn advanced Python and R techniques to perform in-depth analysis and extract valuable information using statistics and machine learning. You'll also understand the main statistical features of datasets by plotting multiple visual graphs in the process of creating a machine learning model.

By the end of this book, you’ll be able to enrich your Power BI data models and visualizations using complex algorithms in Python and R.

Chapter 1: Where and How to Use R and Python Scripts in Power BI

Power BI is Microsoft's flagship self-service business intelligence product. It consists of a set of on-premises applications and cloud-based services that help organizations integrate, transform, and analyze data from a wide variety of source systems through a user-friendly interface.

The platform is not limited to data visualization. Power BI is much more than this, when you consider that its analytics engine (Vertipaq) is the same as SQL Server Analysis Services (SSAS) and Azure Analysis Services. It also uses Power Query as its data extraction and transformation engine, which we find in both Analysis Services and Excel. The engine comes with a very powerful and versatile formula language (M) and GUI, thanks to which you can "grind" and shape any type of data into any form.

Moreover, Power BI supports DAX as a data analytic formula language, which can be used for advanced calculations and queries on data that has already been loaded into tabular data models.

Such a versatile and powerful tool is a godsend for anyone who needs to do data ingestion and transformation in order to build dashboards and reports to summarize a company's business.

Recently, the availability of huge amounts of data, along with the ability to scale the computational power of machines, has made the area of advanced analytics more appealing. So, new mathematical and statistical tools have become necessary in order to provide rich insights. Hence the integration of analytical languages such as Python and R within Power BI.

R or Python scripts can only be used within Power BI with specific features. Knowing which Power BI tools can be used to inject R or Python scripts into Power BI is key to understanding whether the problem you want to address is achievable with these analytical languages.

This chapter requires you to have Power BI Desktop already installed on your machine (you can download it from here: https://aka.ms/pbiSingleInstaller).

In this first section, Power BI Desktop tools that allow you to use Python or R scripts will be presented and described in detail. Specifically, you will see how to add your own code during the data loading, data transforming, and data viewing phases.

One of the first steps required to work with data in Power BI Desktop is to import it from external sources: 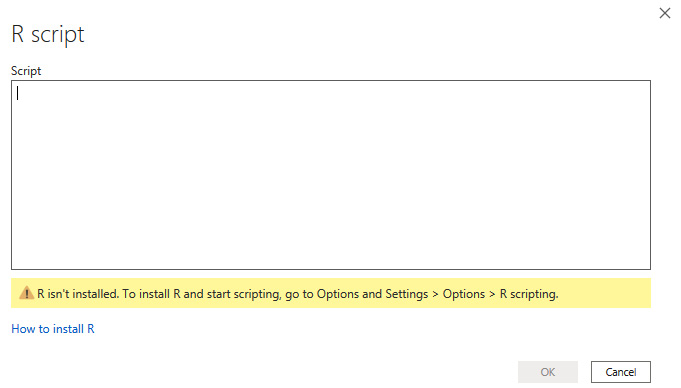 As with Python, in order to run code in R, you need to install the R engine on your machine. Clicking on the How to install R link will open a Docs page where Microsoft suggests installing either Microsoft R Open or the classic CRAN R. Chapter 2, Configuring R With Power BI, will show you which engine to choose and how to configure your favorite IDE to write code in R.

In order to import data using Python or R, you need to write code in the editors shown in Figure 1.3 and Figure 1.4 that assigns a pandas DataFrame or an R dataframe to a variable, respectively. You will see concrete examples throughout this book.

Next, let's look at transforming data.

It is possible to apply a transformation to data already imported or being imported, using scripts in R or Python. Should you want to test this on the fly, you can import the following CSV file directly from the web: http://bit.ly/iriscsv. Follow these steps: 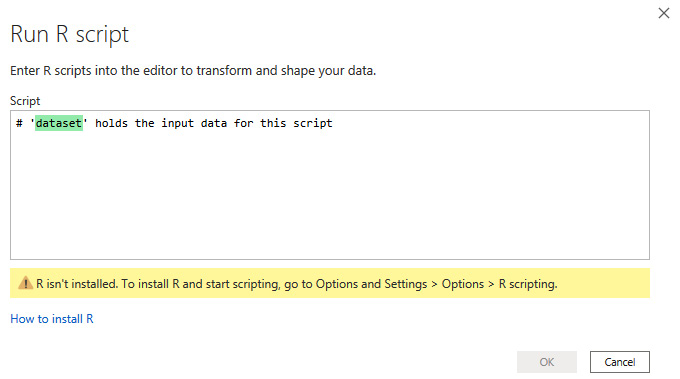 Next, let's look at visualizing data.

Finally, your own Python or R scripts can be added to Power BI to create new visualizations, in addition to those already present in the tool out of the box: 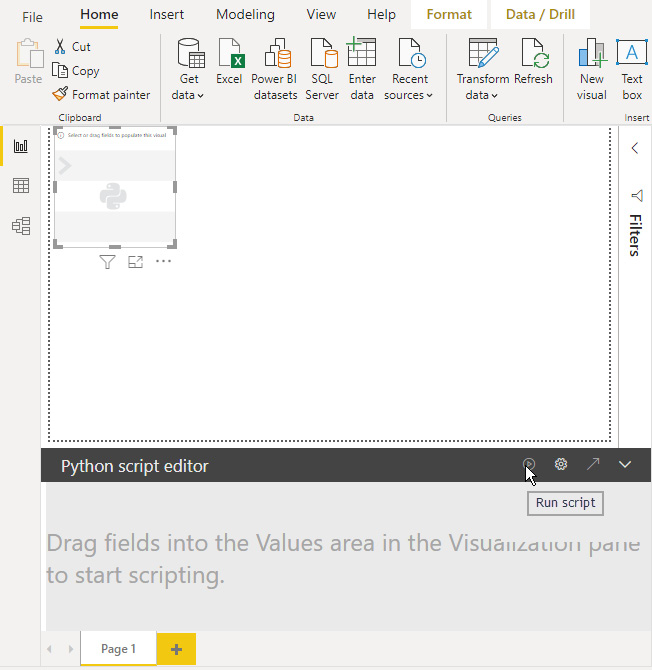 You can now write your own custom code in the Python editor and run it via the Run script icon highlighted in Figure 1.14 to generate a Python visualization.

A pretty much identical layout occurs when you select R script visual.

Using R and Python to interact with your data

In the previous section, you saw all the ways you can interact with your data in Power BI via R or Python scripts. Beyond knowing how and where to inject your code into Power BI, it is very important to know how your code will interact with that data. It's here that we see a big difference between the effect of scripts injected via Power Query Editor and scripts used in visuals:

In the final section of this chapter, let's look at the limitations of using R and Python when it comes to various Power BI products.

Apart from the licenses, which we will not go into here, a summary figure of the relationships between the previously mentioned products follows: 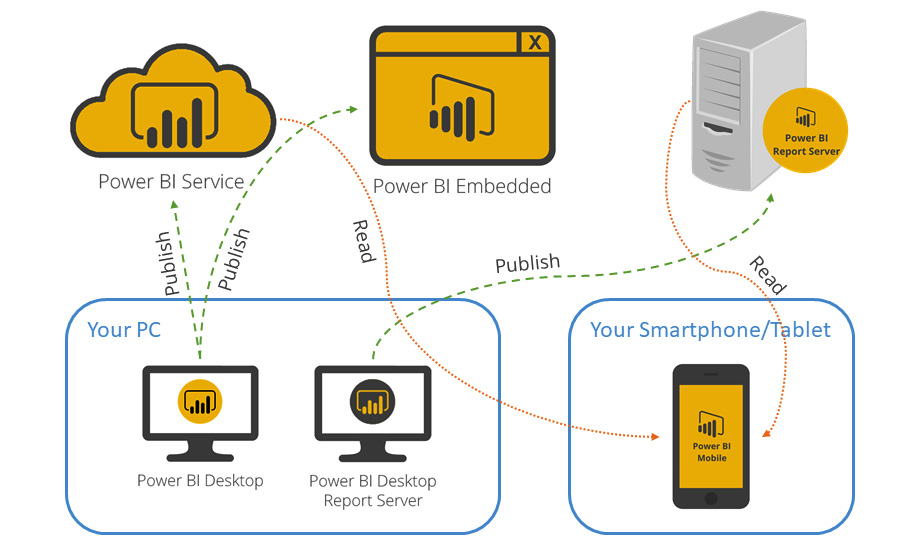 Unfortunately, of all these products, only Power BI Service, Power BI Embedded, and Power BI Desktop allow you to enrich data via code in R and Python: 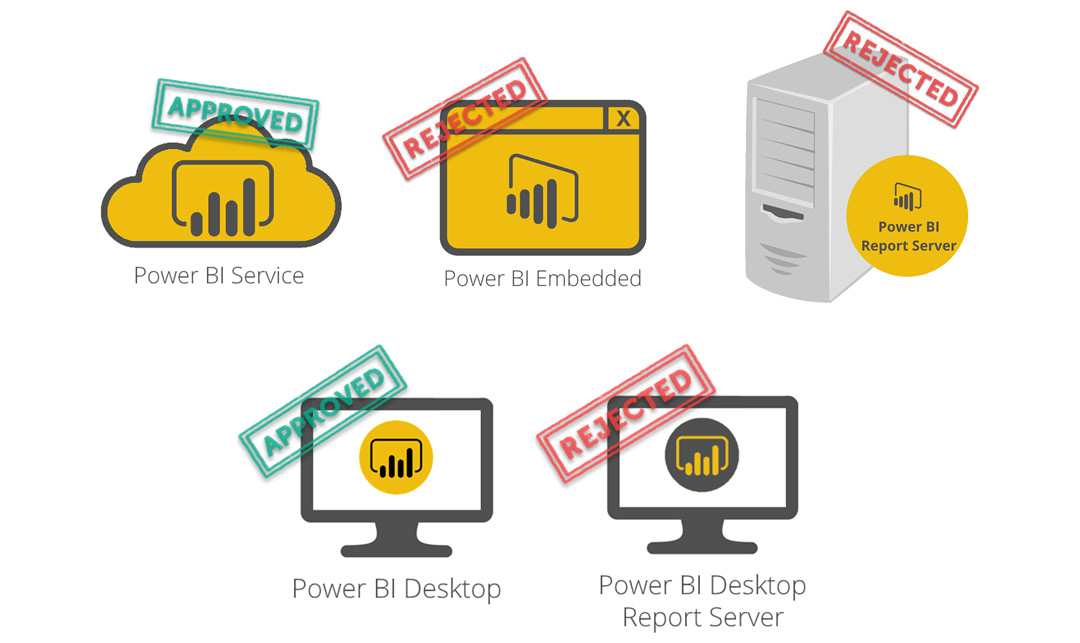 From here on out, when we talk about Power BI Service in terms of compatibility with analytical languages, what we say will also apply to Power BI Embedded.

So, if you need to develop reports using advanced analytics through R and Python, make sure the target platform supports them.

This chapter has given a detailed overview of all the ways by which you can use R and Python scripts in Power BI Desktop. During the data ingestion and data transformation phases, Power Query Editor allows you to add steps containing R or Python code. You can also make use of these analytical languages during the data visualization phase thanks to the R and Python script visuals provided by Power BI Desktop.

It is also very important to know how the R and Python code will interact with the data already loaded or being loaded in Power BI. If you use Power Query Editor, both when loading and transforming data, the result of script processing will be persisted in the data model. Also, if you want to run the same scripts again, you have to refresh the data. On the other hand, if you use the R and Python script visuals, the code results can only be displayed and are not persisted in the data model. In this case, script execution occurs whenever cross-filtering is triggered via the other visuals in the report.

Unfortunately, at the time of writing, you cannot run R and Python scripts in any Power BI product. The only ones that provide for running analytics scripts are Power BI Desktop and the Power BI service.

In the next chapter, we will see how best to configure the R engine and RStudio to integrate with Power BI Desktop.

Nice topic, alway nice to be able to extend a powerful application 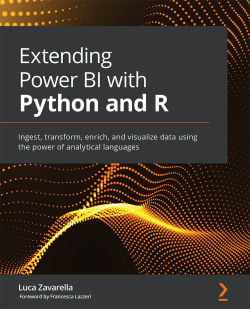