Continuous deployment and Agile methodology have enabled huge advances in modern applications. This book will enable the reader to make use of this rapidly evolving technology to build highly scalable applications within AWS using different architectures.

You will begin with installation of AWS SDK and you will get hands-on experience on creating an application using AWS Management Console and AWS Command Line Interface (CLI). Next you will be integrating Applications with AWS services such as DynamoDB, Amazon Kinesis, AWS Lambda, Amazon SQS and Amazon SWF

Following this you will get well versed with CI/CD workflow and work with four major phases in Release processes – Source, Build, Test and Production. Next you will learn to apply AWS developer tools in your Continuous Integration (CI) and Continuous Deployment (CD) WorkFlow. Later you will learn about User Authentication using Amazon Cognito and also how you can evaluate the best architecture as per your infrastructure costs. You will learn about Amazon EC2 service and deploy an app using Amazon EC2.You will also get well versed with container service which is Amazon EC2 Container Service (Amazon ECS) and you will learn to deploy an app using Amazon ECS. Along with EC2 and ECS, you will also  deploying a practical real-world example of a CI/CD application with the Serverless Application Framework which is known as AWS Lambda.  Finally you will learn how to build, develop and deploy the Application using AWS Developer tools like AWS CodeCommit, AWS CodeBuild, AWS CodeDeploy and AWS CodePipeline as per project needs. Also you can develop and deploy applications within minutes using AWS CodeStar from wizard.

By the end of this book, the reader will effectively build, deploy, and manage applications on AWS along with scaling and securing applications with best practices and troubleshooting tips.

Most probably, if you are reading this book, you are a code-drink lover who is trying to explore or probably using Amazon Web Services (AWS). AWS contains around 20 different kinds of category/product, which have 110+ services. In this chapter, we will explore AWS tools and SDKs, which are under the Developer tools category of AWS products.

AWS also provides primary developer tools, command-line tools, toolkits, and SDKs to develop and manage AWS applications. It provides a variety of tools and SDKs as per the programming knowledge and project needs. With the help of these tools and SDKs, you can quickly and easily build and manage great applications on the AWS Cloud. This chapter will show you how to install and use these SDKs for different programming languages.

By the end of this chapter, you will understand how to install AWS SDKs and use them for development in different programming languages.

As we discussed in the introduction, AWS provides developer and command-line tools, toolkits, and SDKs to develop and manage AWS applications. Currently, AWS provides nine SDKs for different programming languages, six SDKs for IoT devices, and five SDKs for mobile devices. Let's take a brief look at this:

The following are the different kinds of SDK. In this chapter, we will cover two programming language SDKs, Java and Node.js:

Let's start with the Java SDK. This SDK helps to minimize the complexity and provision to coding using Java APIs for AWS Services such as Amazon EC2, Amazon DynamoDB, Amazon S3, and many more. You can download a single package from the AWS website which includes the AWS Java library and code samples with documentation.

Currently, you can download the AWS SDK for Java v1.11.x code base and AWS has recently launched an AWS SDK for Java v2.0, which is major code change. This version is built on Java 8. It has added features such as non-blocking I/O and a pluggable API layer (by default, it will use Apache but you can change this as per your project needs). In this version, you can see some API changes:

This AWS SDK for Java v2.0 is a developer preview version and not recommended for production use.

Let's explore how to install, set up, and use AWS SDK for Java.

You need to set up AWS SDK for Java on your machine to use in your project. Please perform the following steps to set up the environment and run the sample code in Java using the AWS SDK:

The AWS credentials profile file is located in your filesystem. It should be at the following path:

The file format should be as follows:

Another alternative is to set up AWS_ACCESS_KEY_ID and AWS_SECRET_ACCESS_KEY environment variables. Now, replace your AWS access key ID and secret access key for the values of downloaded_access_key_id and downloaded_secret_access_key.

The AWS region configuration file is located in your filesystem. It should be at the following path:

This file format should be as follows:

Now, replace your AWS region for the value or region. Another alternative is you can set up AWS_REGION as an environment variable.

You can use different methods to include the AWS SDK for your Java project. We will explore all methods in this chapter: 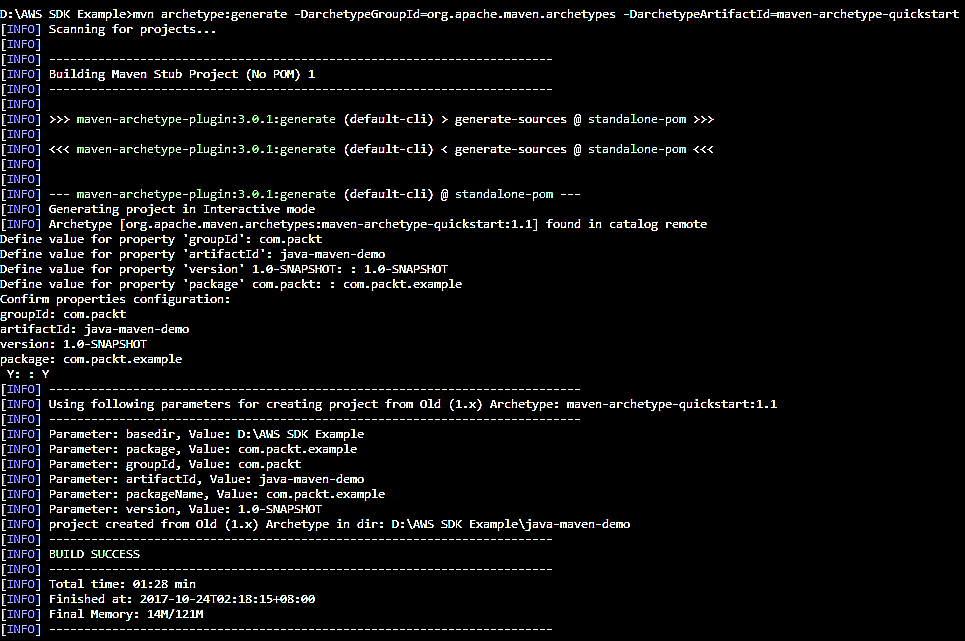 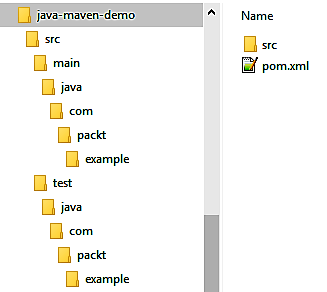 You will see the pom.xml file generated under the ..\AWS SDK Example\java-maven-demo folder.

Configuring an SDK as a Maven dependency 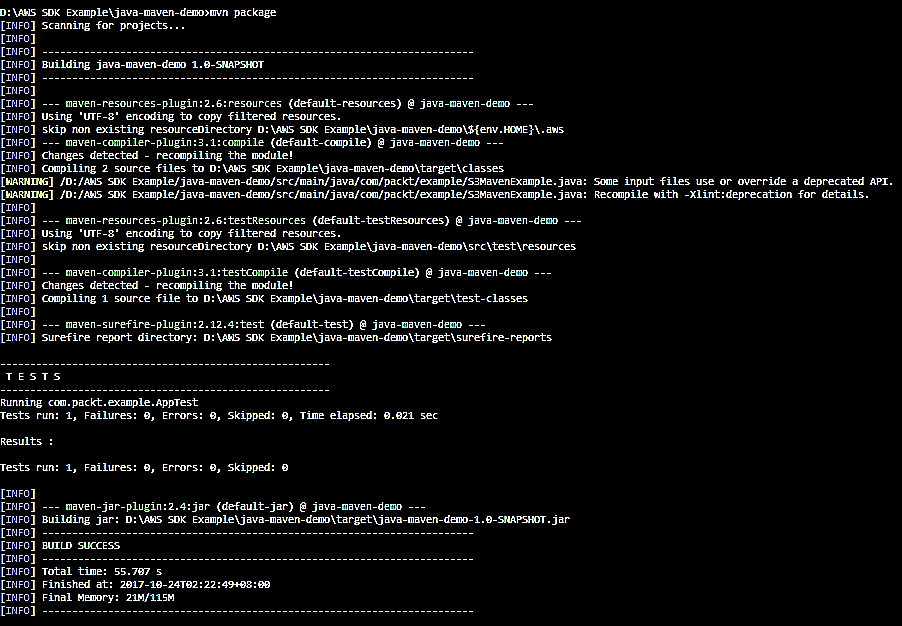 It will create and delete the bucket as per the specified regions: 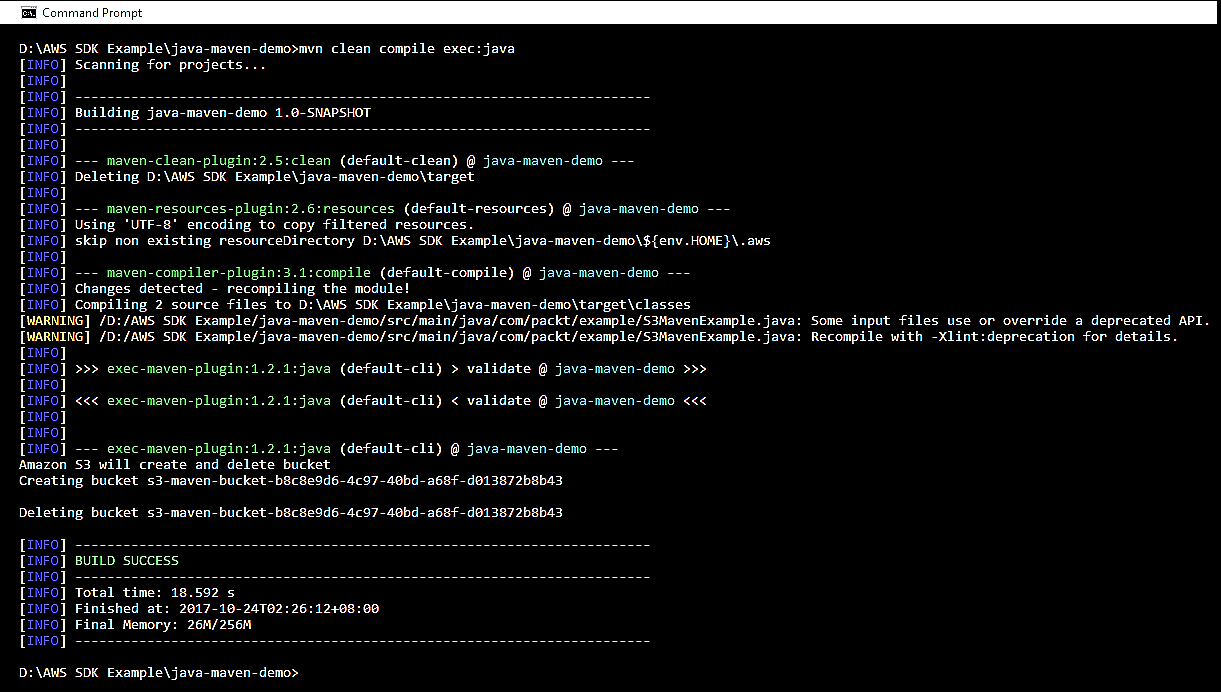 If you have completed this step and you can see the creation and deletion of the bucket, it means you have successfully completed AWS SDK for Java using Maven in your project.

Please perform the following steps to include AWS SDK for Java using Gradle: 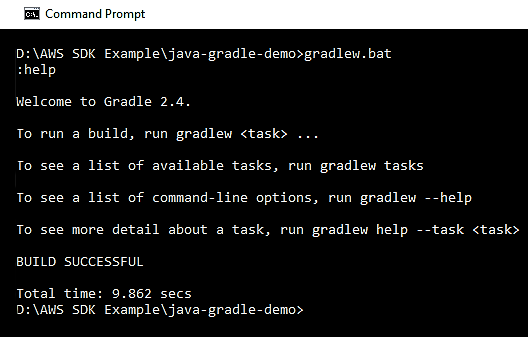 After completing this execution, you can see the .gradle folder.

It will create and delete the bucket as per the specified regions: 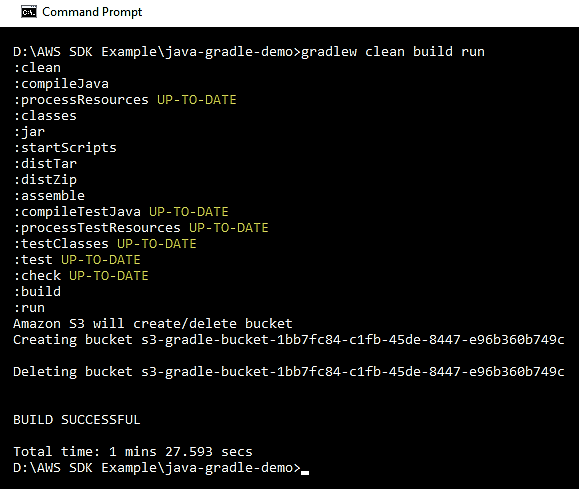 I am assuming that you have already installed Eclipse 4.4 (Luna) or a higher version on your machine as the AWS toolkit supports that.

There are two ways to install an AWS toolkit in your IDE: 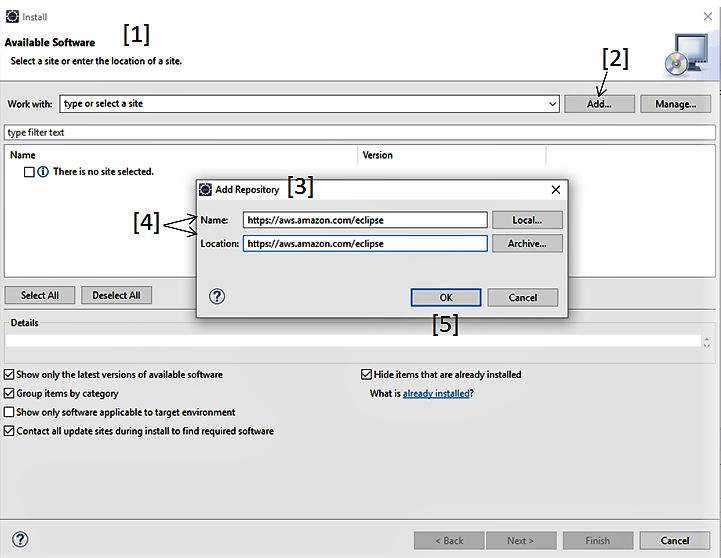 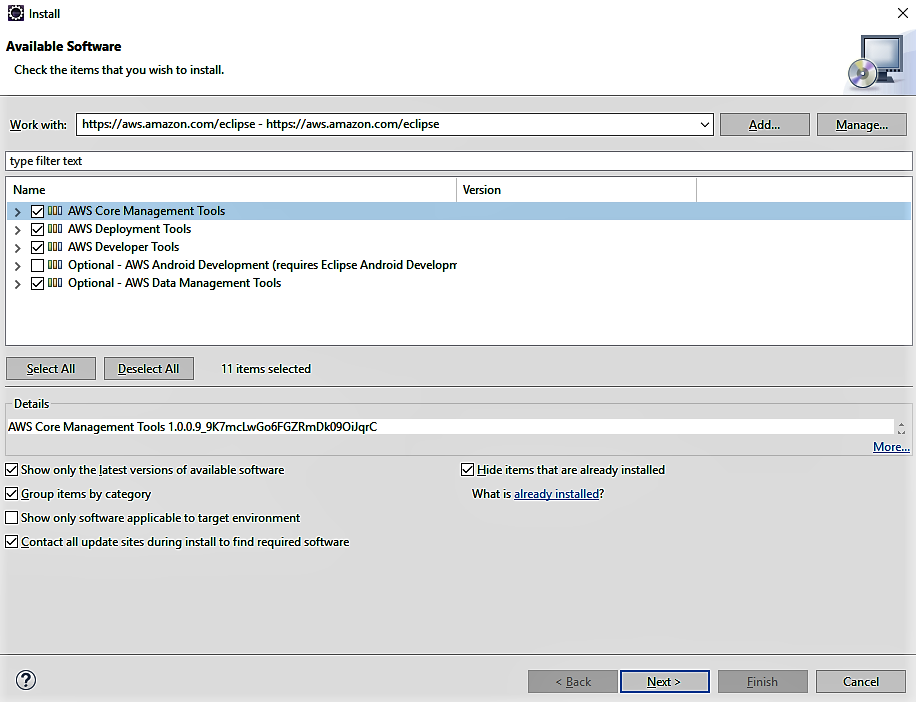 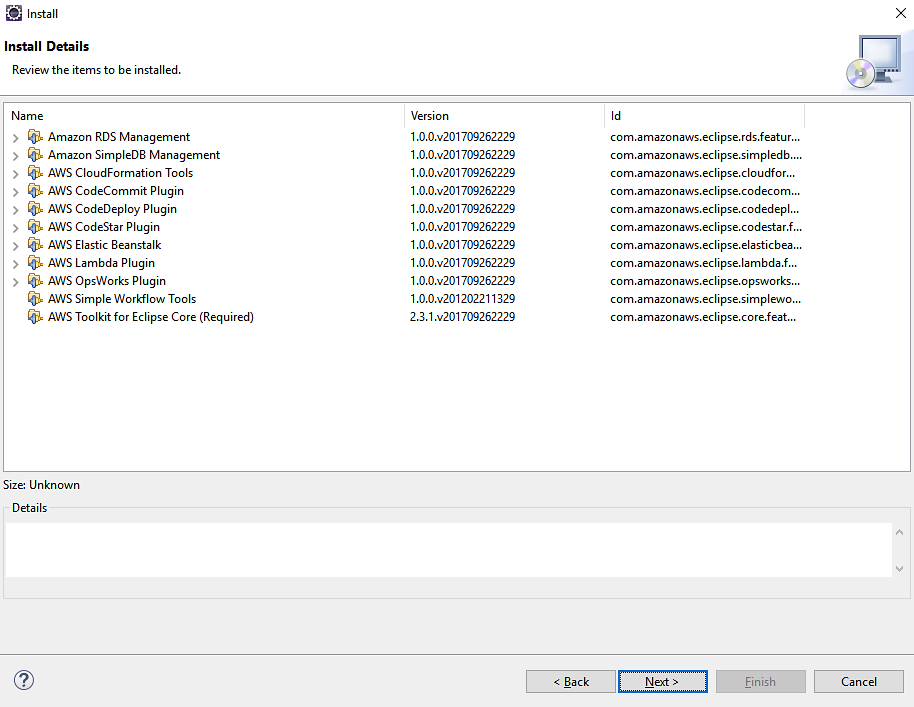 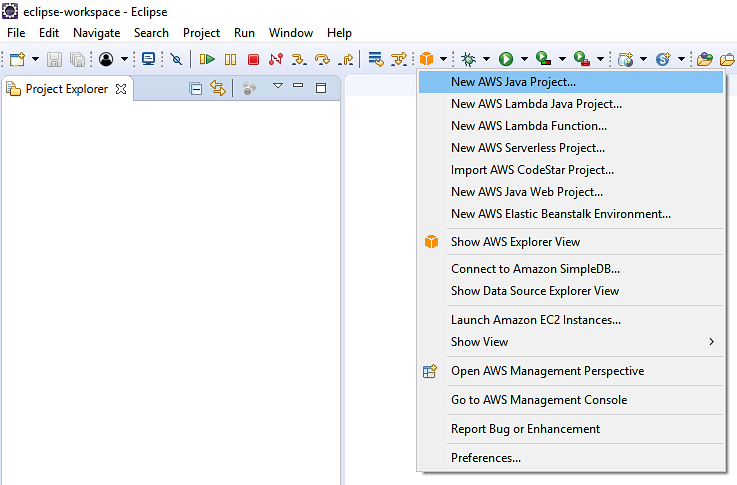 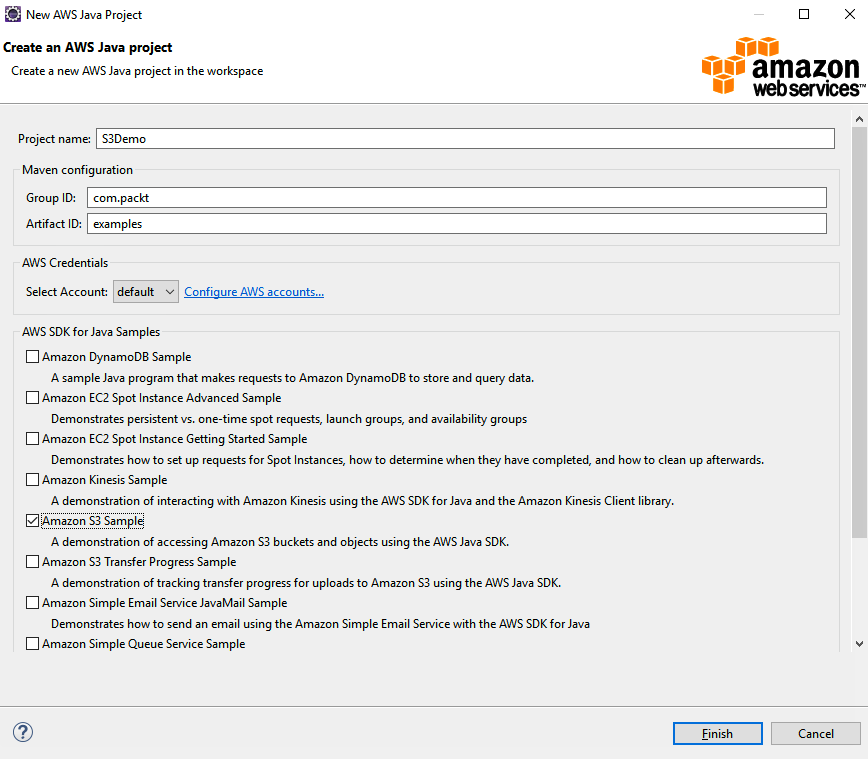 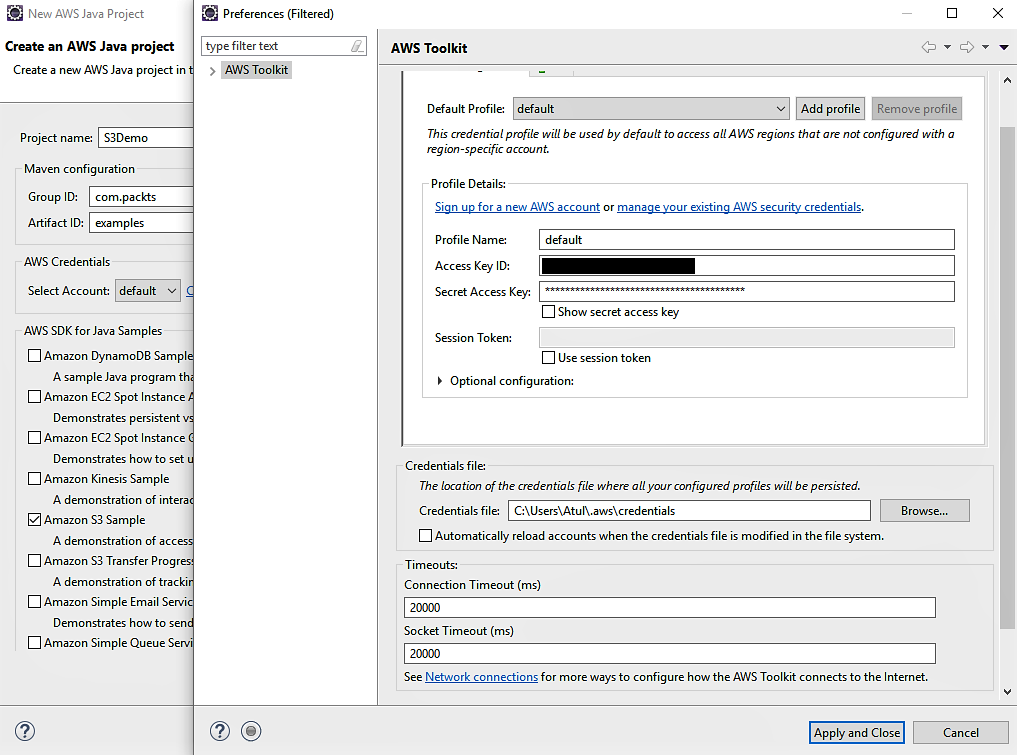 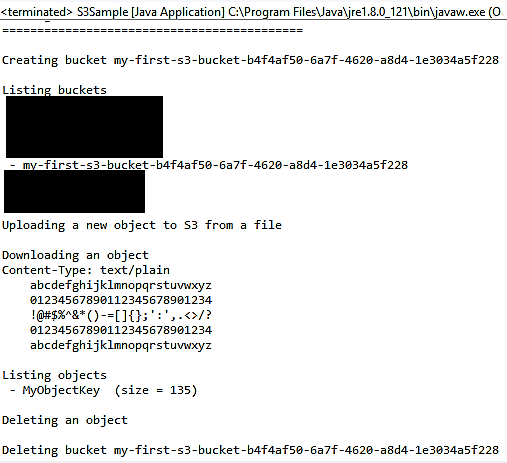 Node.js is a free, open source, cross-platform framework. It is used to execute JavaScript code on the server side. In Node.js, you can use AWS SDK for JavaScript. This SDK will help to remove the complexity of coding by providing JavaScript objects to use the AWS services. A single downloaded package includes the AWS JavaScript library as well documentation.

You can install AWS SDK for Node.js in two ways:

Let's install the AWS SDK package and create a sample application to create and delete a bucket on S3 using the following steps: 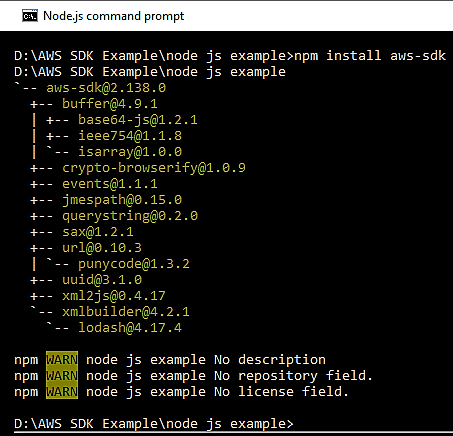 Here you are creating s3 as an S3 service object, bucketname with node-sdk-sample as the prefix with a random number, and params as the parameters to call the bucket:

The preceding method is used to create the bucket with parameters and callback functions:

Previously, we discussed AWS SDKs for different programming languages and we have covered Java and Node.js with setup and examples. Now we will see how you can set up SDKs on IoT devices.

IoT is the Internet of Things, where the internet is connected with things such as software, hardware, physical devices, home appliances, vehicles, or any kind of sensor, actuator, or network, and exchanges data between them. In simple terms, your thing or device will collect, sense, and act on data and send it to an other device from the internet. These connected devices are communicating with each other from various technologies and flow data autonomously. IoT devices can be useful for consumer applications, enterprise applications, smart homes, agriculture, and many industries.

AWS provides different kinds of SDK for the IoT to connect securely and seamlessly to your hardware devices.

The following are the different kinds of AWS SDK:

AWS provides different kinds of SDKs to connect securely and seamlessly to your mobile devices.

The following are the different kinds of AWS SDKs. In this chapter, we will cover AWS SDK for Android:

For Android, AWS provides an open source SDK that is distributed under an Apache license. This will provide libraries, code examples, and documentation to develop mobile applications using AWS.

Now let's understand how to set up the AWS Mobile SDK and then we will see an example with Amazon S3.

The AWS Mobile SDK is available at the following two resources for download:

AWS Secure Token Service (STS) and Amazon Cognito Identity are bundled with the AWS Mobile SDK core library. You will get a compile-time error if you include it as a separate JAR file.

In the next section, you will see how to set up AWS Mobile SDK for Android.

With the help of the AWS Mobile SDK, you can create a new project or update an existing project.

The following are prerequisites:

You need to do the following configuration:

Amazon Mobile SDK for Android v 2.1.3 or above supports Maven.

groupid will be the same as com.amazonaws for all AWS services.

In artifactid, you have to mention the appropriate service which you are using in your applications.

In version, you have to mention the acceptable AWS Mobile SDK version for Android for the given dependency: 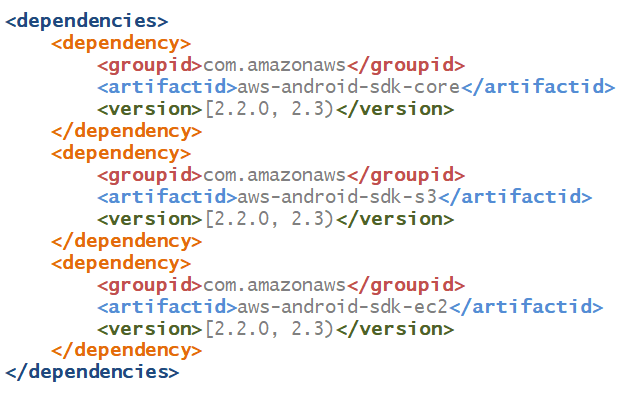 In Android Studio, you can add the AWS Mobile SDK JAR file in your application by dragging it into the Project View. You can also add the individual JAR file for your services. It will add it to the build path automatically. Then use the Gradle file to sync your project.

Set a permission in the Android manifest file. In your AndroidManifest.xml file, you need to set the following permission: <uses-permission android:name="android.permission.INTERNET" />.

So far, we have covered AWS SDK for IoT and AWS Mobile SDK for Android. Let's explore an example for the Transfer Utility to consume Amazon S3 services. Here we will upload a file from a mobile device and download a file to a mobile device. We will use Android Studio, Amazon Cognito, Amazon S3, and Amazon IAM. Please perform the following steps: 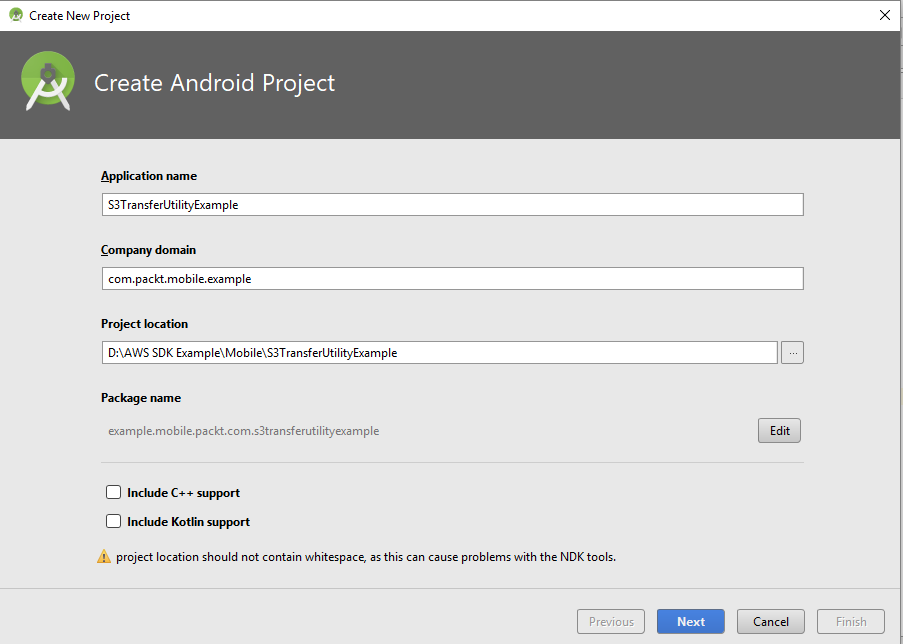 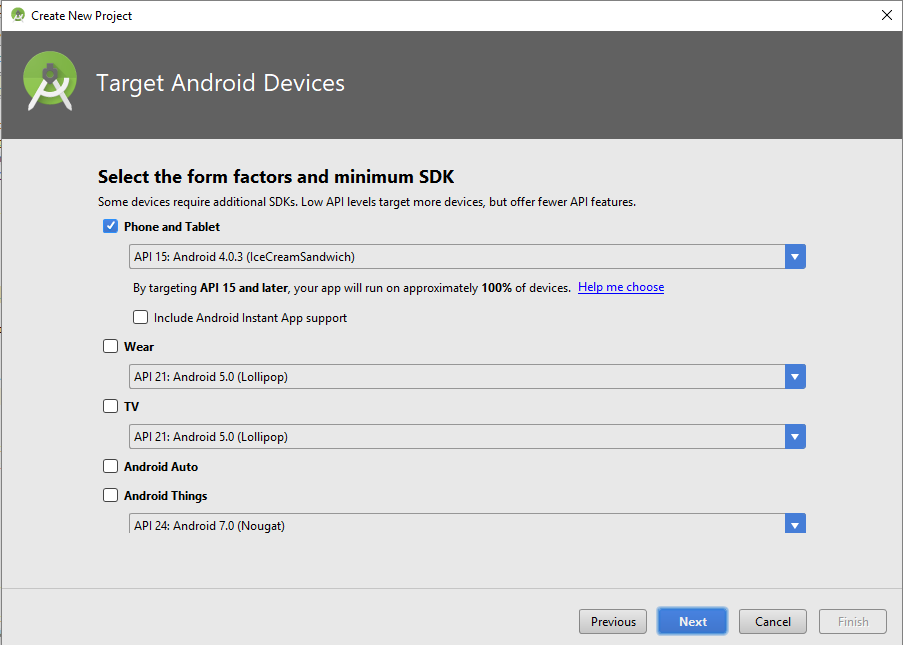 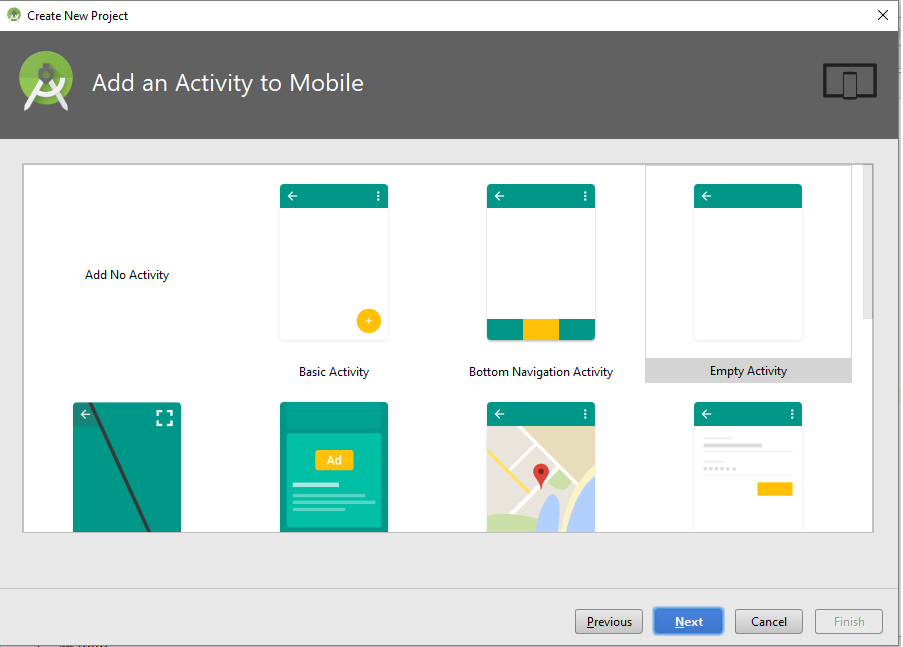 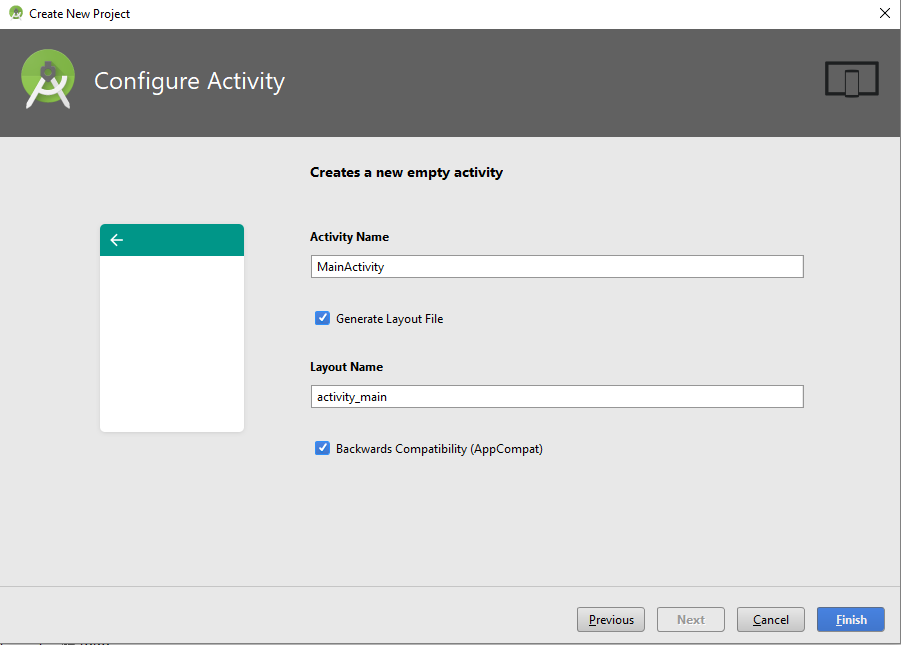 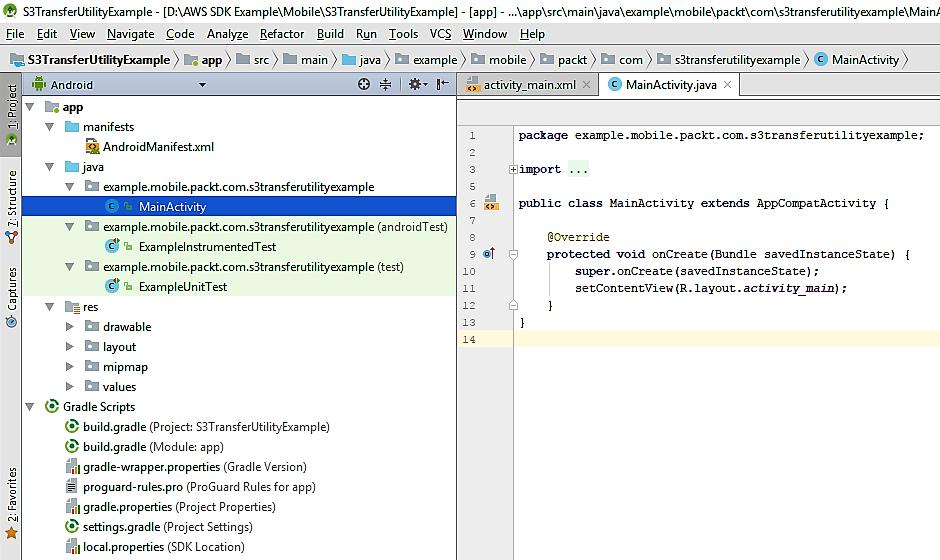 When you tab on FILE UPLOAD TO S3, if the file is uploaded successfully, you can see it in your S3 bucket from the console:

When you click on FILE DOWNLOAD FROM S3, if the file is downloaded successfully, you can see it in your folder or path:

So far, we have completed the setup of AWS SDK on Java and Node.js with examples. This is a good starting point for developers who have a limited knowledge of AWS SDKs.

In the next chapter, you will see how to integrate applications with relevant AWS services such as DynamoDB, Amazon Kinesis, AWS Lambda, Amazon SQS, and Amazon SWF.

Not a good book..Provide proper explanation 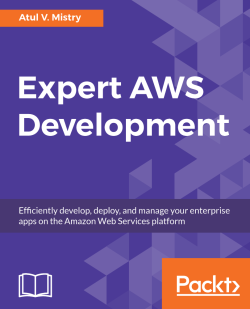