Drush for Developers, Second Edition, takes common challenges in Drupal projects and solves them using Drush. This book starts with the different installation approaches for Drush and its command structure. It then moves on to perhaps the trickiest challenge in Drupal projects: keeping code and configuration together during a project's lifetime. Next, we will deep dive into the tasks needed to keep a website under control and learn how to run, automate, and monitor them effectively.

Error validating and debugging our Drush commands is a must and this book has a whole chapter on that topic. The magic of managing remote Drupal projects through Drush site aliases is explained in the following chapters through a practical example. Finally, the book wraps up by putting in practice all the concepts covered in previous chapters in order to implement a development workflow for a team.

Drush is a command-line interface for Drupal. It can also serve as an alternative to write scripts using PHP instead of BASH. The Drush ecosystem is vast. Every year, at DrupalCon, the Drush core team gives an update on the bleeding edge features being developed by them and by contributors all over the world.

Tasks such as clearing caches, running database updates, executing batch scripts, and managing remote websites are just a glimpse of what you can do with Drush.

Here is an example. Imagine that you have pushed new code for your website and need to run database updates. Normally this would involve the following steps:

Now, here is how you can accomplish the preceding steps with Drush:

That's it. We did not even have to open an SSH connection or a web browser. The first command created a database backup and the second one executed pending database updates. In both these commands, we used @example.prod, which is a Drush site alias used to load configuration details about a particular site. We will see Drush site aliases in detail in Chapter 5, Managing Local and Remote Environments.

Drush is highly customizable. You can adjust it to fit a specific workflow. This is especially helpful when working on a Drupal project within a team; you can define security policies, wrap commands with sensible defaults, sanitize a copy of the production database automatically, and so on. This is the area that this book will focus on. We will go through some common processes during a Drupal project and discover how we can automate or simplify them using Drush. Let's start!

This chapter is an introduction and will cover the following topics to get you up to speed:

The following are the installation requirements for Drush. If you have already installed it, simply make sure that you are running version 7.0.0-alpha5 (https://github.com/drush-ops/drush/releases/tag/7.0.0-alpha5) or higher by executing drush --version in the command line, and skip forward to the next section of this chapter.

If you use Windows, consider using something like VirtualBox (https://www.virtualbox.org) to install a virtual machine that runs, for example, Ubuntu (http://www.ubuntu.com). If you still want to use Drush on Windows, there is an installer available at http://www.drush.org/drush_windows_installer. Note, however, that the installer installs an older version of Drush, so some of the contents of this book won't work.

Let's start by making sure that you have PHP 5.3.0 or greater installed. To do so, open a terminal and run the following command:

The output should look something like the following code screenshot:

As you can see, I am using PHP 5.5.9. If you get a Command not found message or your version is lower than 5.3.0, you will need to install or upgrade PHP. Refer to your vendor documentation to do this as the steps will vary.

On Linux and OSX platforms, the recommended way to install Drush is through Composer (https://getcomposer.org), a dependency manager that has become the standard in the PHP world. Installing Composer can be accomplished with the following commands:

If you find any issues while running the preceding commands or while installing it through a packaging system such as homebrew, then take a look at the official installation instructions for Composer (https://getcomposer.org/doc/00-intro.md#globally-on-osx-via-homebrew). Once you have completed the installation, you can verify that it works by running the following command:

If you have already installed Composer, make sure that it is up to date by running composer self-update (https://getcomposer.org/doc/03-cli.md#self-update).

Drush installation on Linux and OSX

At the time of writing this book, the latest available version of Drush is 7.0.0-alpha5 (https://github.com/drush-ops/drush/releases/tag/7.0.0-alpha5). This is the version that we will use. The Drush core team does a fantastic job of keeping backwards compatibility between major versions, so if you have already installed a more recent version of Drush, you should be okay as practically all the examples in the book will work.

Let's go ahead and install Drush. Once Composer has been installed (see the previous section on installing Composer), you can install Drush with the following command:

The preceding command has downloaded Drush 7.0.0-alpha5 into $HOME/.composer/vendor/bin/drush. In order to use Drush from anywhere in the system, we need to make sure that Composer's bin directory is present at our $PATH environment variable. We can do so with the following commands:

Note the use of $HOME and $PATH, which are environment variables. $HOME contains the location of your home directory, while $PATH represents a list of directories to look for executable files. You can view the contents of these variables by executing echo $HOME or echo $PATH. Take a look at your home directory to check whether there is .bash_profile, .bash_login, or .profile file at $HOME. If you find them, adjust the preceding commands, so the $PATH variable is adjusted in these files as well.

Finally, we can test that Drush has been installed successfully and contains the right version:

If you prefer to install Drush manually, then follow these steps:

The main README file at the Drush repository has a great section on POST-INSTALL tasks (https://github.com/drush-ops/drush#post-install) with additional information on configuring PHP and extra settings for environments such as MAMP. It's worth taking a look at it.

Drush offers a broad list of commands that cover practically all the aspects of a Drupal project. If you are already fluent with executing commands in the terminal, you can skip this section. Otherwise, keep on reading to discover what arguments and options are and how these affect the behavior of a command.

Let's start with a very simple command such as core-status, which prints environment information about Drush and, if available, a Drupal site. Assuming that we have a Drupal project installed at /home/juampy/projects/drupal, let's run this command here and see its output:

The preceding output informs us about the main configuration of the Drupal project plus some Drush environment settings.

Providing arguments to a command

The core-status command accepts a single argument that specifies which setting is to be retrieved (you can see this information by running drush help core-status). An argument is a string of text that acts as an input data for a command. Arguments are entered after the command name and are separated by spaces. Therefore, if we need to print just the items containing version in the setting name, we can execute the following command:

Altering a command's behavior through options

Let's take a look at options with an example. The core-status command has an option to show the database password. We will now add it to the command and inspect the output:

The --show-passwords option orders the core-status command that we want to see the database password of the Drupal site being bootstrapped.

Excluding some exceptions, there is no strict ordering for options and arguments when you run a command. Besides, Drush does a great job parsing arguments and options no matter how we mix them up in the input. However, our commands will be more readable if we follow this pattern:

Here is an example:

And the following are the commands used in the previous example:

Besides the fact of higher clarity by using the preceding structure, there are some commands in Drush that require options to be given in this order. This is the case of the core-sync Drush command, which is a wrapper of the actual Unix rsync command used to copy files and directories. Let's take a look at the following example:

The preceding command copies files recursively from a Drupal project into /tmp/files. The --dry-run option is an rsync specific option that attempts to copy files but does not make any actual changes. Now, let's try to run the same command but this time placing the option before the command name:

We can see in the preceding output that Drush attempted to evaluate the --dry-run option and failed as it did not recognize it. This example demonstrates that you should carefully read the description of a command by running drush help command-name in order to understand its options, arguments, and ordering.

Most of Drush commands support a shorter name to be used when invoking them. You can find them in parenthesis next to each command name when running drush help, or in the Aliases section when viewing the full help of a command.

For example, the core-status command can also be executed with status or just st, which means that the following commands will return identical results:

For clarity, we will not use command aliases in this book, but these help us to work faster. So, it is worthwhile to use them.

Drush is decoupled from Drupal. This means that it does not necessarily need a Drupal site to work with. Some commands do require a Drupal project to bootstrap, while for others, this might be optional. Let's take core-status as an example. This command gives us information about the current context. If we run this command outside of a Drupal project, we will obtain configuration details for Drush and our local environment:

Now, if we change directory to a Drupal project, we will get extra information about it:

In the preceding scenario, Drush finds out that it is currently at the root of a Drupal project that uses the default location to store its settings (sites/default). Therefore, it is able to bootstrap Drupal and load its configuration.

We do not have to be at the root of a Drupal project in order to run Drush commands against it. Instead, we can append additional options that will let Drush find it. For example, we could run the core-status command from a different directory, adding the --root option that points to the root of our Drupal project:

As we can see at the command output, Drush did bootstrap Drupal although we were not at its root directory. On a multisite Drupal installation, where settings.php is not at sites/default, we need to specify the site within our Drupal project that we want to bootstrap with the --uri option:

The last section of the chapter gave some tips on how to set the context of a Drupal project for Drush. We saw that Drush is pretty intelligent and can automatically figure out whether we are on a Drupal project in order to bootstrap it, or we can alternatively pass extra options to inform where our Drupal project is.

In the next chapter, we will go through one of the most important challenges of developing Drupal projects and how Drush can help us with it: keeping configuration and code together. 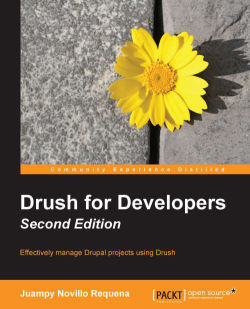