The book starts with explaining rule basics, then builds on this information by going through various areas like human readable rules, rules for validation, and stateful rules, using examples from the banking domain. A loan approval process example shows the use of the jBPM module. Parts of a banking fraud detection system are implemented with the Drools Fusion module which is the complex event processing part of Drools. Finally, more technical details are shown detailing the inner workings of Drools, the implementation of the ReteOO algorithm, indexing, node sharing, and partitioning.

The need to build more and more complex systems is increasing. We're trying to automate all kinds of business processes and implement complex business decisions (for example, insurance-claim adjudication, subscriber enrollment, retail-pricing, promotion, banking-mortgage application, and fraud detection). However, these processes and decisions may not be represented well using traditional programming languages, such as Java or C#. Instead, we should use a specialized technology, such as the Drools platform.

In this chapter we'll look at why there is a need for a platform such as Drools, what advantages and disadvantages it brings, and when or not to use it. We'll briefly look at its history and what modules it consists of.

For example, consider this code that does some checking on customer level, customer accounts, and account balance:

The point of this Java "spaghetti code" is to give you an idea about what we are trying to prevent. You may think that it doesn't look that bad; however, after a couple of changes in requirements and developers who are maintaining the code, it can get much worse. It is usually the case that if you fix one bug, you are more likely to introduce several new bugs. Lots of requirements are literally packed into few lines of code. This code is hard to maintain or change to accommodate new requirements.

It is not only difficult to represent business logic in an imperative programming style language, but it is also hard to differentiate between code that represents the business logic and the infrastructure code that supports it.

There is a need for a different paradigm for representing the business logic.

The problem is that with an imperative-style language, we are implementing both: what needs to be done (business requirements) and how it needs to be done (algorithm). Let's look at declarative-style programming, for example, the SQL in relational databases. The SQL describes what we want to search; it doesn't say anything about how the database should find the data. This is exactly what we need for our business requirements.

A rule engine provides an alternative computation model. We declare rules in pretty much the same way as the business analyst does requirements, that is, as a group of if-then statements. The rule engine can then take these rules and execute them over our data in the most efficient way. Rules that have all their conditions true have their then part evaluated. This is different to imperative-style programming languages where the developer has to explicitly specify how it needs to be done (with sequence of conditionals and loops).

If we rewrite code from Code listing 1 in a declarative manner, it might look something like this:

Each rule represents one requirement. This is more readable and maps to business requirements more naturally.

It is also useful to note that in an imperative program, the piece of code evaluating the customer's level in the first example needs to be explicitly invoked, passing to it a specific customer. In a declarative program you cannot invoke a given rule directly; do not decide on which data you want to run it, because the customer instance is actually taken from a working memory (this will be described later).

The following is a summary of the various advantages of a declarative-style solution that Drools brings:

On the other side don't think of Drools as the silver bullet. Writing systems that make complex decisions is never an easy task; Drools just helps to make it a bit easier. You'll have to invest in the training of developers. Failing to do so can result in inefficient rules and seemingly unpredictable results. The developers need to adopt a different way of thinking to write business rules declaratively. It may look difficult at first, but once we master this, then the rules will be much easier and faster to write.

You may be thinking that since we don't specify how the business rules should be implemented, we just specify what needs to happen, and so it may be difficult to troubleshoot. This is a valid point, and to resolve this, Drools comes with a variety of tools that greatly help you with troubleshooting.

When you are debugging a program written in Java, you can easily step through the program flow and find out what is going on. The debugging of rules can be more difficult without an understanding of how the underlying system works. Rule engines have many advantages, but on the other side, they can be dangerous if you don't know exactly what's going on. And in this book you'll learn just that.

Another disadvantage of a rule engine is its memory consumption. This is a price a rule has to pay for being efficient. Lots of calculations are being cached to avoid processing them again. However, since the memory is so cheap nowadays, this is no longer a problem.

The interaction of rules can be quite complex, especially when some rules modify data that other rules depend on, which can easily cause recursion. The Drools platform provides many ways to prevent this from happening.

When not to use a rule engine

If you answered yes to any of these questions, you probably shouldn't use a rule engine.

Drools is a Business Logic integration Platform (BliP). It is written in Java. It is an open source project that is backed by JBoss and Red Hat, Inc. It is licensed under the Apache License, Version 2.0 (http://www.apache.org/licenses/LICENSE-2.0.html). This book will focus on Version 5.5 of this platform that was released in November 2012.

Work on Drools (the rule engine) began in 2001. From its beginning Drools underwent many changes. Drools 1.0 started with a brute force linear search. It was then rewritten in Version 2.0, which was based on the Rete algorithm. The Rete algorithm boosted Drools' performance. Rules were written mainly in XML. The next Version 3.0 introduced a new .drl format. This is a domain-specific language specially crafted for writing rules. It proved to be a great success and it became the main format for writing rules. Version 4.0 of the rule engine had some major performance improvements together with first release of Business Rules Management System (BRMS). This formed the base for the next big release 5.0, where Drools became a BliP. The platform consists of four main modules:

Drools has several optional modules. For example, OptaPlanner for solving planning problems or Drools Chance that adds uncertainty support. Another very important part of Drools is its Eclipse plugin.

Drools has a very active and friendly community. It is growing with every year. You can get in touch by visiting the Drools blog, wiki, or the mailing lists. For more information please visit the Drools website at http://www.jboss.org/drools/.

In the following chapter we're going to look at how to set up the development environment before starting with some basics needed to write and execute rules in Drools. 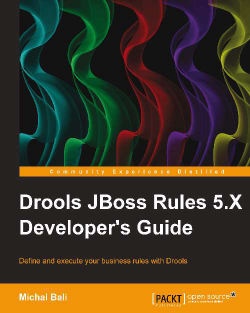