This book guides you through all of the features of Drools, such as dynamic rules, the event model, and Rete implementation with high performance indexing. It will help you to set up the JBoss Rules platform and start creating your own business. It's easy to start developing with Drools if you follow its real-world examples that are intended to make your life easier.

Starting with an introduction to the basic syntax that is essential for writing rules, the book will guide you through validation and human-readable rules that define, maintain, and support your business agility. As a developer, you will be expected to represent policies, procedures and. constraints regarding how an enterprise conducts its business; this book makes it easier by showing you it can be done.

A real-life example of a banking domain allows you to see how the internal workings of the rules engine operate. A loan approval process example shows the use of the Drools Flow module. Parts of a banking fraud detection system are implemented with Drools Fusion module, which is the Complex Event Processing part of Drools. This in turn, will help developers to work on preventing fraudulent users from accessing systems in an illegal way.

Finally, more technical details are shown on the inner workings of Drools, the implementation of the ReteOO algorithm, indexing, node sharing, and partitioning.

The need to build more and more complex systems is increasing. We're trying to automate all kinds of business processes and implement complex business decisions. However, these processes and decisions are not very well represented using traditional programming languages such as Java or C#. Instead, we should use specialized technology such as the Drools platform.

In this chapter, we'll look at why there is a need for the Drools platform, what advantages and disadvantages it brings, and when (not) to use it. We'll briefly look at its history and what modules it consists of. We'll also see some commercial and open source alternatives.

Enterprise systems usually have multiple layers. From top to bottom they are: presentation layer, business logic layer, and persistence layer. The middle layer—business logic represents the core of the application where all of the business processes and decisions take place.

The requirements for the business logic layer tend to change more often than the requirements for the rest of the application. We might be lucky when we get a complete specification, but that happens rarely. Even then, the requirements usually evolve over time and are often re-worked. As this happens, a standard solution using imperative style language (imperative programs are a sequence of commands for the computer to perform; for example, languages such as Java and C#) would quickly end up with so-called spaghetti code—lots of nested if-else statements.

It is often a good idea to document the following separately:

These areas change at different schedules, have a different degree of business user involvement, and none the less they are implemented differently.

I am referring to these three areas simply as requirements.

For example, consider the following code that does some checking on customer level, customer accounts, and account balance:

Readers are requested to note that they should follow the text carefully. Some additions to the code are required in order to run the examples successfully.

The point of this Java 'spaghetti code' is to give you an idea what we are trying to prevent. You may think that it doesn't look that bad. However, after a couple of changes in requirements and developers that are maintaining the code, it can get much worse. It is usually the case that if you fix one bug, you are more likely to introduce five new bugs. A lot of requirements are literally packed into a few lines of code. This code is hard to maintain or change in order to accommodate new requirements.

As more conditions are added, the performance of this system will degrade. Moreover, when we want to change the behavior of the application, we'll have to re-compile and re-deploy the whole application.

It is not only difficult to represent business logic in a imperative programming style language, but also hard to differentiate between code that represents the business logic and the infrastructure code that supports it.

There is a need for a different paradigm for representing the business logic.

The problem is that with an imperative style language, we are implementing both, what needs to be done (business requirements) and how it needs to be done (algorithm). Let's look at declarative style programming, such as SQL, in relational databases (other declarative style languages include, for example, Prolog or XSLT). SQL describes what we want to search, it doesn't say anything about how the database should find the data. This is exactly what we need for our business requirements.

A rule engine provides an alternative computational model. We declare rules in pretty much the same way as the business analyst does the requirements—as a group of if-then statements. The rule engine can then take these rules and execute them over our data in the most efficient way. Rules, which have all of their conditions true, have their then part evaluated. This is different from imperative style programming languages where the developer has to specify how it needs to be done explicitly (with a sequence of conditionals and loops).

If we rewrite the code from code listing 1 in a declarative manner, it might look like the following:

Each rule represents one requirement. This is more readable and maps to business requirements more naturally.

The following is a summary of various advantages of a declarative style solution that Drools brings:

On the other hand, don't think of Drools as the silver bullet. Writing systems that make complex decisions is never an easy task. Drools just helps to make it a bit easier. You'll have to invest in training developers. Failing to do so can result in inefficient rules and seemingly unpredictable results. The developers need to adopt a different way of thinking in order to write business rules declaratively. It may look difficult at first but once we master this, the rules will be much easier and faster to write. If we look again at the SQL/Database analogy—SQL queries require developer training in order to be efficiently written, in the same way as rules do. Also, the quality of the data model is directly proportional to the easiness of writing SQL queries and their efficiency, in the exact same way that the quality of the domain model is directly proportional to the easiness of writing rules and their efficiency

We don't specify how the business rules should be implemented, and instead we just specify what needs to happen. Therefore, we don't know how it happened, and hence it may be difficult to troubleshoot. This is a valid point and to resolve this Drools comes with a variety of tools that greatly help you with troubleshooting. Thanks to these tools, troubleshooting becomes a piece of cake.

When you are debugging a program written in Java, you can easily step through the program flow and find out what is going on. Debugging of rules can be more difficult without an understanding of how the underlying system works. Rule engines have many advantages, but on the other side they can be dangerous if you don't know exactly what's going on. In this book, you'll learn just that.

Another disadvantage of a rule engine is its memory consumption. This is the price rule engines have to pay for being efficient. A lot of calculations are being cached to avoid processing them again. However, this is no longer a problem as memory is so cheap nowadays.

Interaction of rules can be quite complex, especially, when some rules modify data that other rules depend on—it can easily cause recursion. The Drools platform provides many ways to prevent this from happening. This is where Drools Flow module comes in action. It can provide a well defined flow of program execution and can separate rules into groups that can be sequentially executed. Integration testing can also help here.

When not to use a rule engine

If you answered yes to any of these questions, you probably shouldn't use a rule engine.

Drools is a Business Logic integration Platform (BLiP). It is written in Java. It is an open source project that is backed by JBoss and Red Hat, Inc. It is licensed under the Apache License, Version 2.0 (http://www.apache.org/licenses/LICENSE-2.0.html). This book will focus on version 5.0 of this platform that was released in May 2009.

Work on Drools (the rule engine) began in 2001. From its beginning, Drools underwent many changes. Drools 1.0 started with a brute force linear search. It was then rewritten in version 2.0, which was based on the Rete algorithm. The Rete algorithm boosted Drools performance. Rules were written mainly in XML. The next version (3.0) introduced a new .drl format. This is a specific language specially crafted for writing rules. It proved to be a great success and it became the main format for writing rules. Version 4.0 of the rule engine had some major performance improvements together with the first release of a Business Rules Management System (BRMS). This formed the base for the next big release (5.0) where Drools became a Business Logic integration Platform. The platform consists of four main modules:

Another very important part of Drools is its Eclipse plugin. It greatly helps with writing and debugging rules and processes. It checks for syntax errors, offers auto completion, and has lots of other useful features.

Drools has a very active and friendly community. It is growing every year. You can get in touch with this community by visiting the Drools blog, wiki, or the mailing lists. For more information, please visit Drools web site at http://www.jboss.org/drools/.

Alternatively, you can build a rule engine yourself. It may be appropriate in some specific scenario, but most of the time you'll only be re-inventing the wheel. More importantly, your solution probably won't be as efficient as an existing mature product such as Drools.

Drools provides a different computational model for business process and rule execution. It is a generic algorithm with generic optimizations to provide 'good enough' performance while giving us lots of benefits such as flexibility and declarative programming.

We know that this platform consists of multiple modules and in the following chapters we're going to look at them in more detail, starting with the core rule engine itself—Drools Expert. 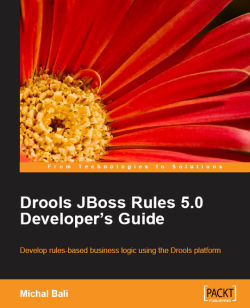