The Microsoft MS-300 exam is designed to test the knowledge and skills of administrators in deploying, configuring, and managing SharePoint Online, SharePoint Server, SharePoint Hybrid, OneDrive for Business, and Teams. This book offers up-to-date coverage of the important topics based on the MS-300 exam and features question answers and insider tips to help you prepare for certification.

Written in a clear, succinct way, the book starts by helping you configure and manage SharePoint Online. You’ll then delve into OneDrive for Business, right from managing users and groups, through to monitoring sharing and security. Further chapters will guide you through working with Teams, with an emphasis on managing identity authentication, resolving issues with the service, and even observing usage patterns. Later, you’ll get up to speed with workload integrations, covering the Yammer business communications platform, before moving on to understand how to integrate Microsoft Stream with SharePoint, Teams, and Yammer. Finally, you’ll learn to develop data governance and user adoption strategies.

By the end of this book, you'll be well-versed with SharePoint Online and have learned the essential techniques and concepts you need to know in order to pass the MS-300 certification exam.

In addition to content management capabilities for your online data, SharePoint Online can also connect to on-premises database services. The value proposition of SharePoint Online is to enable users and administrators to focus on providing value to their organizations instead of managing infrastructure: 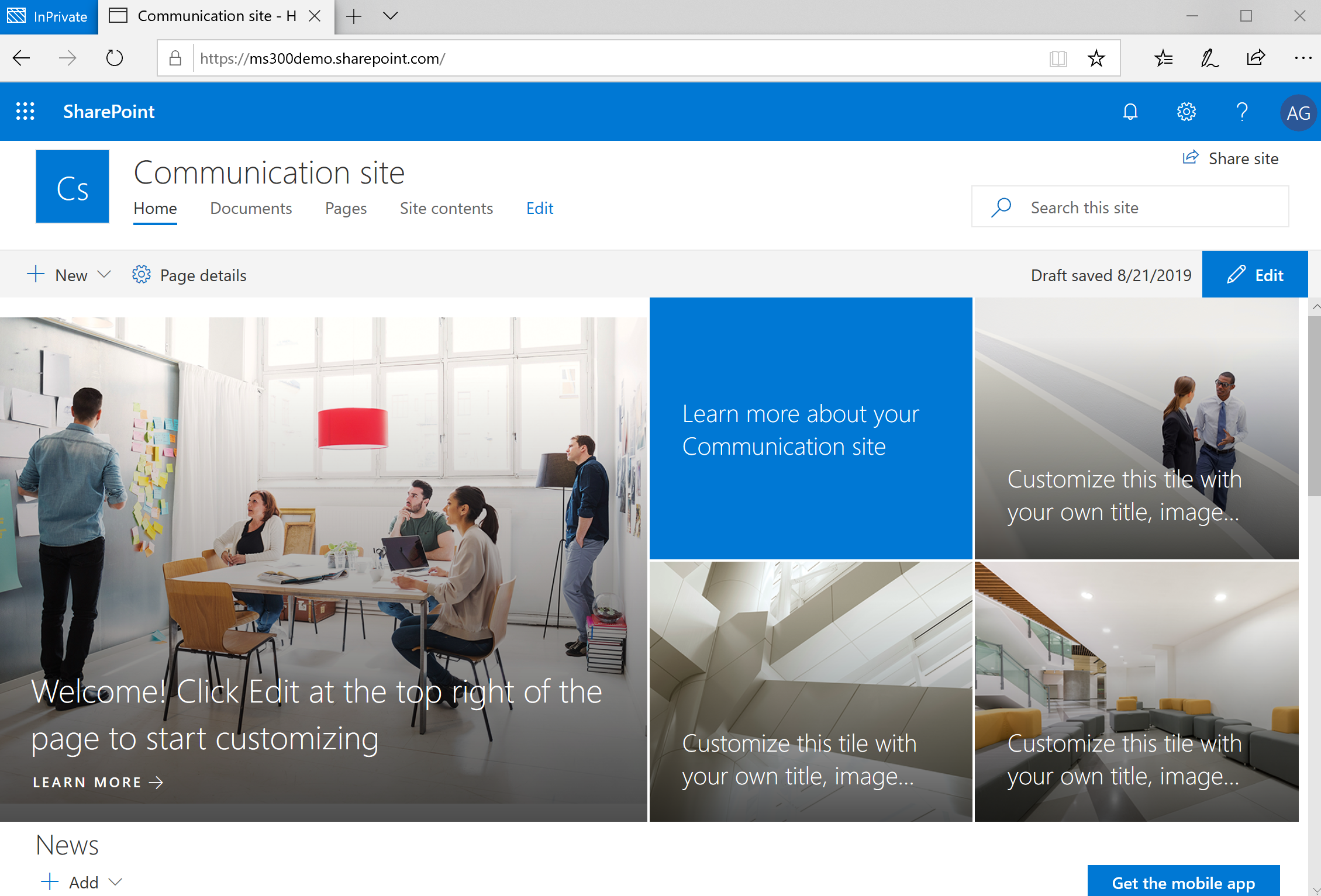 With SharePoint Online (as well as other services in the Microsoft 365 suite), organizations don't need to purchase and deploy infrastructure of their own. Instead, they can quickly adopt a pre-configured platform as a subscription service and begin using it almost immediately.

For content creators, SharePoint Online features both easy-to-use what you see is what you get drag and drop design, publishing, and categorization tools for content authors, as well as interfaces for coding more complex sites and queries. As a manager of a SharePoint site, you can publish news, upload documents, add links to resources, and visualize data from other parts of the Office 365 ecosystem. Microsoft enables content consumers to access resources via browsers on desktop, tablet, and mobile devices, as well as native mobile applications for Android and iOS platforms: 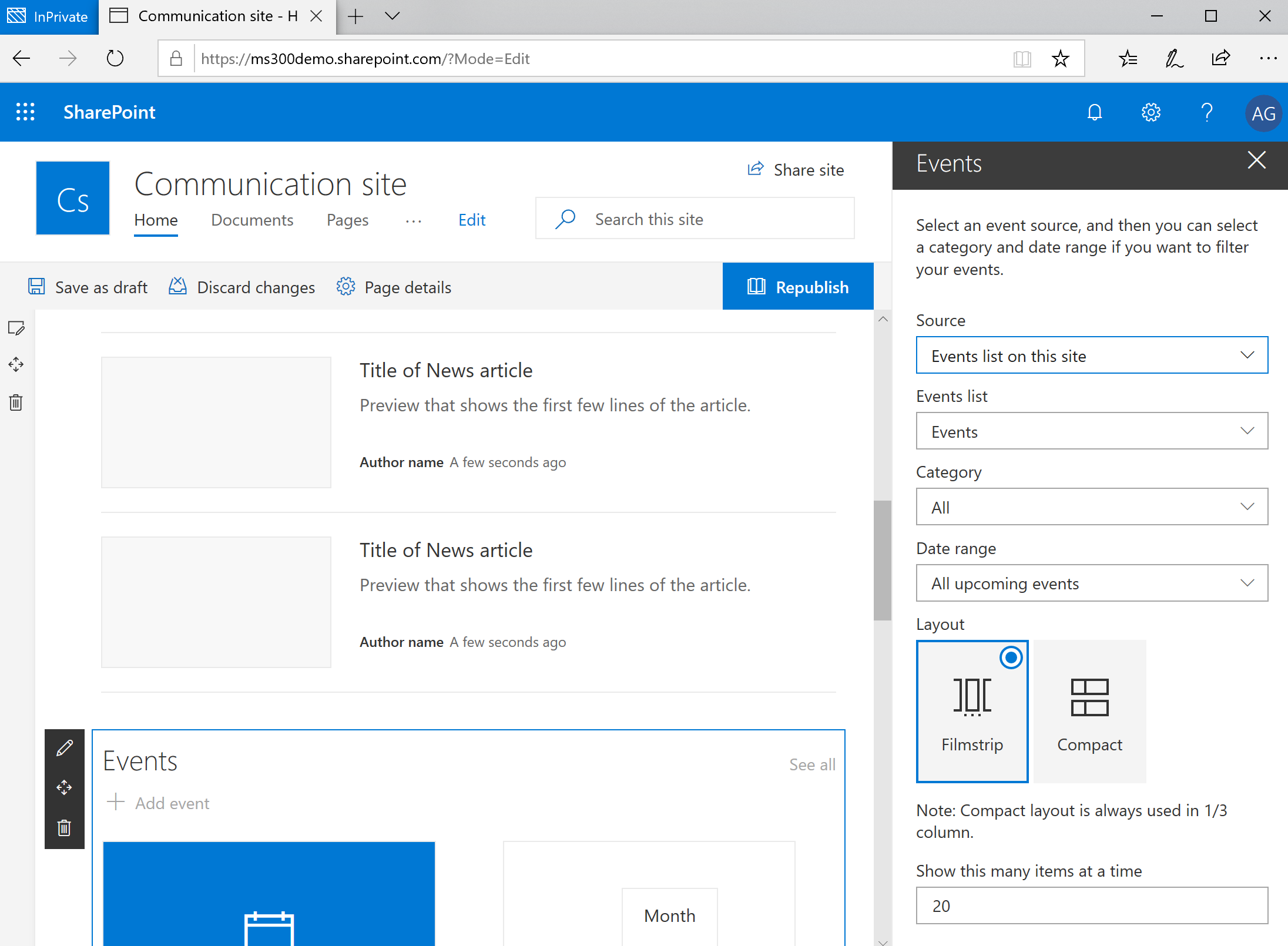 SharePoint Online, like other services in the Microsoft 365 platform, is licensed on a per-user basis. The following table shows general features and limits of the SharePoint Online service:

You can purchase an unlimited amount of additional storage for your SharePoint Online environment.

The SharePoint Online platform is generally comprised of site collections, sites, web parts, and pages. A site is a website that contains various SharePoint objects such as pages, document libraries, or calendars. A site collection is a group of sites, normally organized by department, project, cross-functional group, or other business units. A page is an HTML web page. Pages can be basic with just displayed text or built from templates (such as Wiki or Publishing Portal) that may have different web parts preloaded.

Web parts are codeless widgets or apps that can be used to display or interact with information on a page: 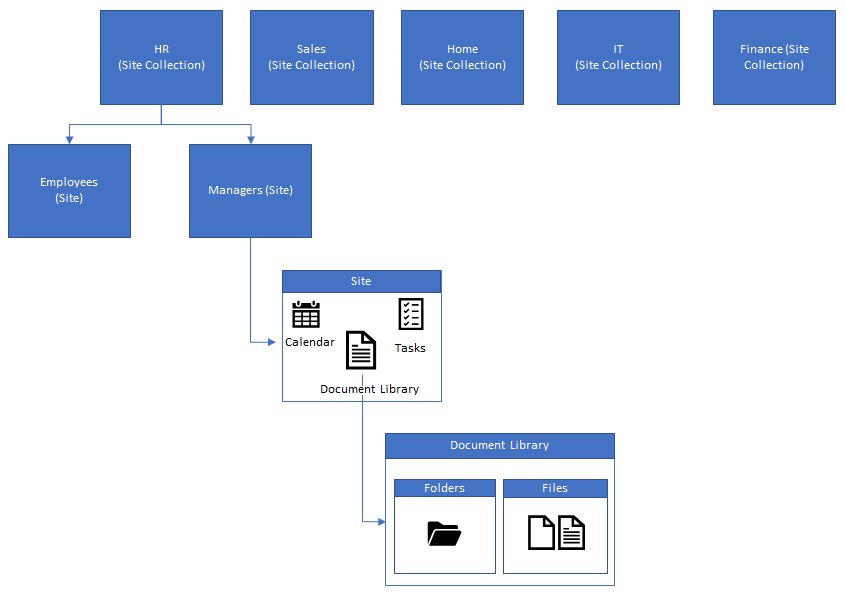 In the preceding diagram, the Managers (Site) contains three web parts: a calendar, a task list, and a document library. The Document Library web part looks like a filesystem interface to SharePoint and can be used to upload and download files as well as perform other file operation tasks.

In older versions of SharePoint Online and SharePoint Server, document and application content were arranged in sites, which were arranged in site collections. These storage mechanisms and methods were different and disconnected from other applications and services in the Microsoft ecosystem. One of the core differentiating features between legacy on-premises deployments of Windows Server applications (such as SharePoint Server and Exchange Server) and their modern cloud-based counterparts is the availability of a new construct: the Office 365 Group.

Office 365 Groups (also periodically referred to as Modern Groups) are a special type of group object that is built from numerous components. There is an Exchange Online Group Mailbox component for message storage and a SharePoint Online team site used for file and metadata storage. Office 365 Groups can function like traditional distribution lists in that users can be added to or removed from a list and members, but that's where the similarities end.

Whereas a traditional distribution group is transactional (it distributes a message to members but has no history of messages that have been relayed through it), an Office 365 Group has the concept of persistent storage—a feature provided by an underlying Exchange Group Mailbox. Once a message has been sent to an Office 365 Group, it is stored in the group's mailbox and is visible to anyone who joins the group at a later time.

A member of an Office 365 Group can choose to Follow or Stop Following the conversations in their own inboxes. When a user chooses to follow a group in their inbox, they will receive a copy of the message sent to the group (making it function like a classic distribution group for them). An Office 365 Group also has a calendaring component (stored in the Exchange mailbox), a OneNote notebook, a SharePoint Team site, and a default Planner plan available. Office 365 Groups can be joined from Outlook or Outlook Web App. If a user chooses to stop following a group, they will no longer receive a copy of messages sent to the group in their inbox, but they will continue to be able to access the group through the Outlook and Outlook Web App clients.

Some organizations may wish to limit who can create Office 365 Groups or enforce a naming policy to provide some context for the group. With an Azure Active Directory Premium P1 or higher license, you can manage many features of Office 365 Groups, including who can create them, naming policies (including prefixes, suffixes, and prohibited words), and expiration policies: 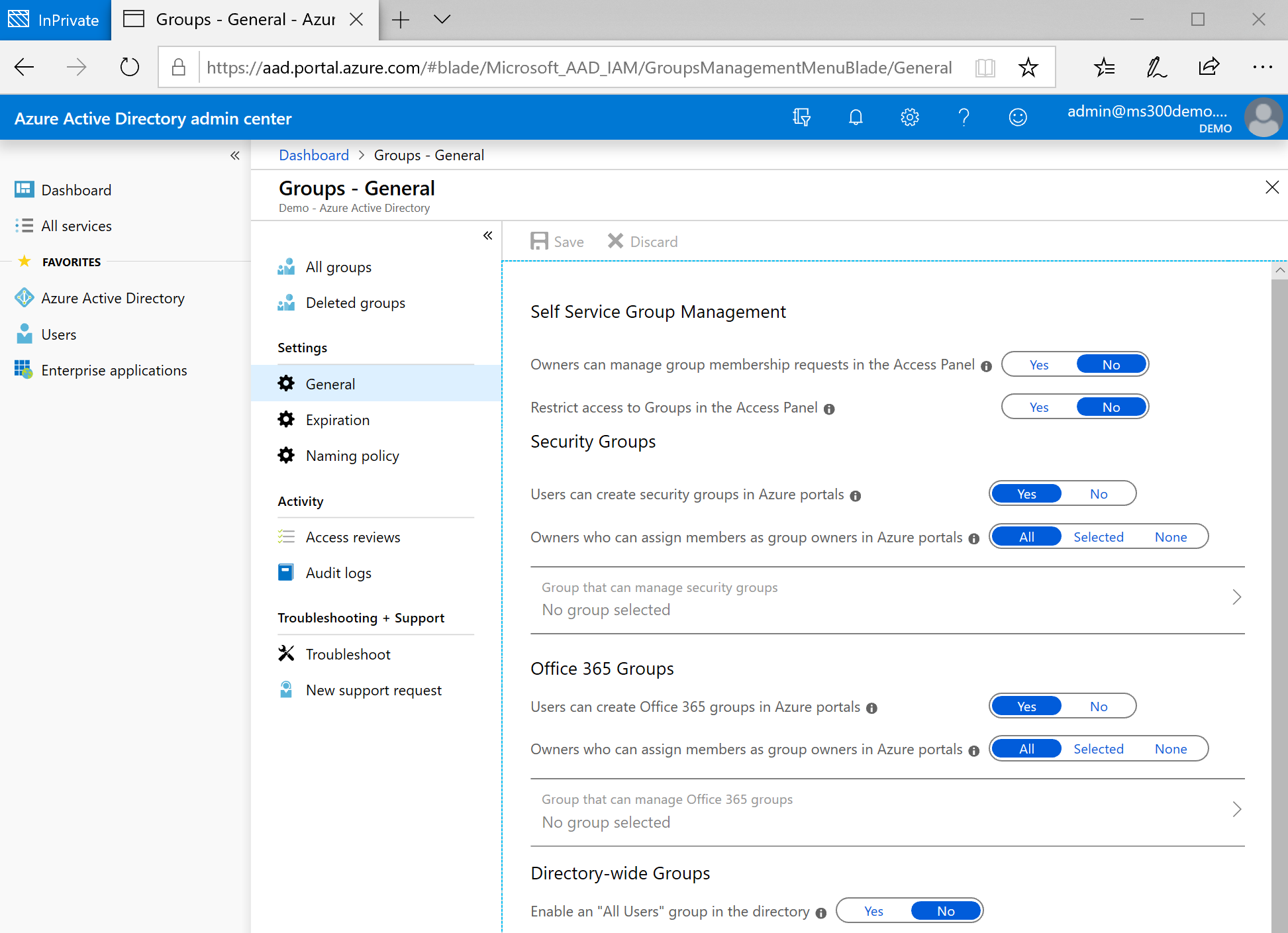 Policies you set here will apply organization-wide to all Office 365 Group creation and management activities going forward. The policies that you apply to Office 365 Groups will also govern the groups created by applications (such as Teams).

Use the following questions to test your knowledge on this chapter. You can find the answers in Chapter 22, Assessment Answers. 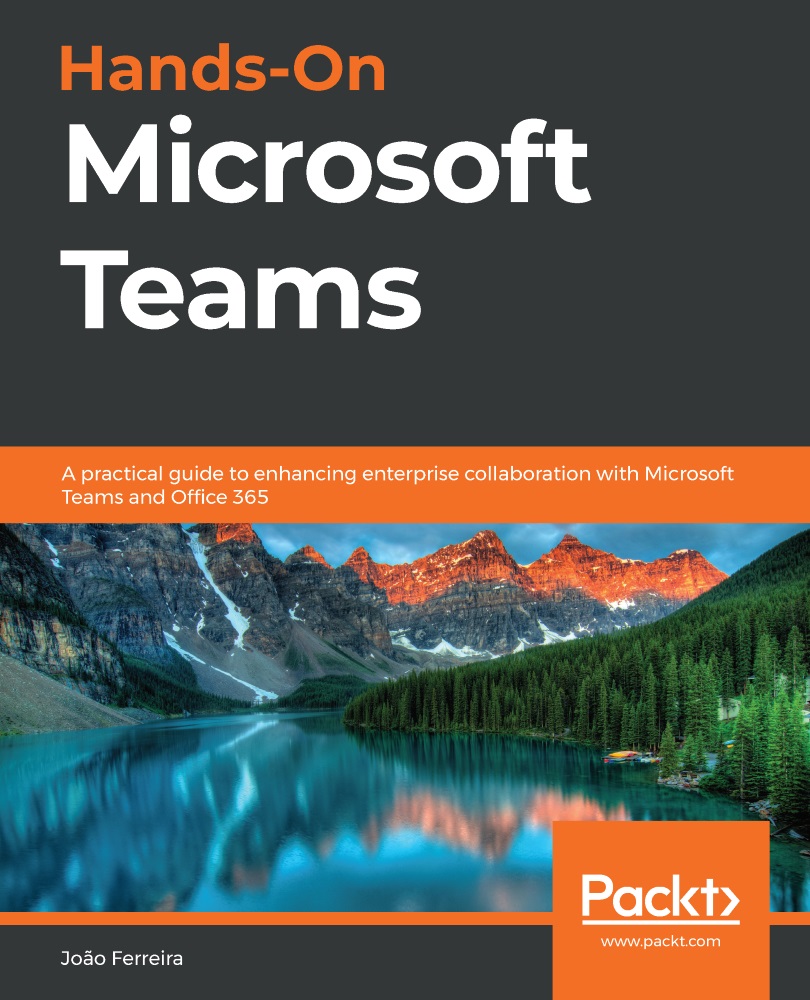 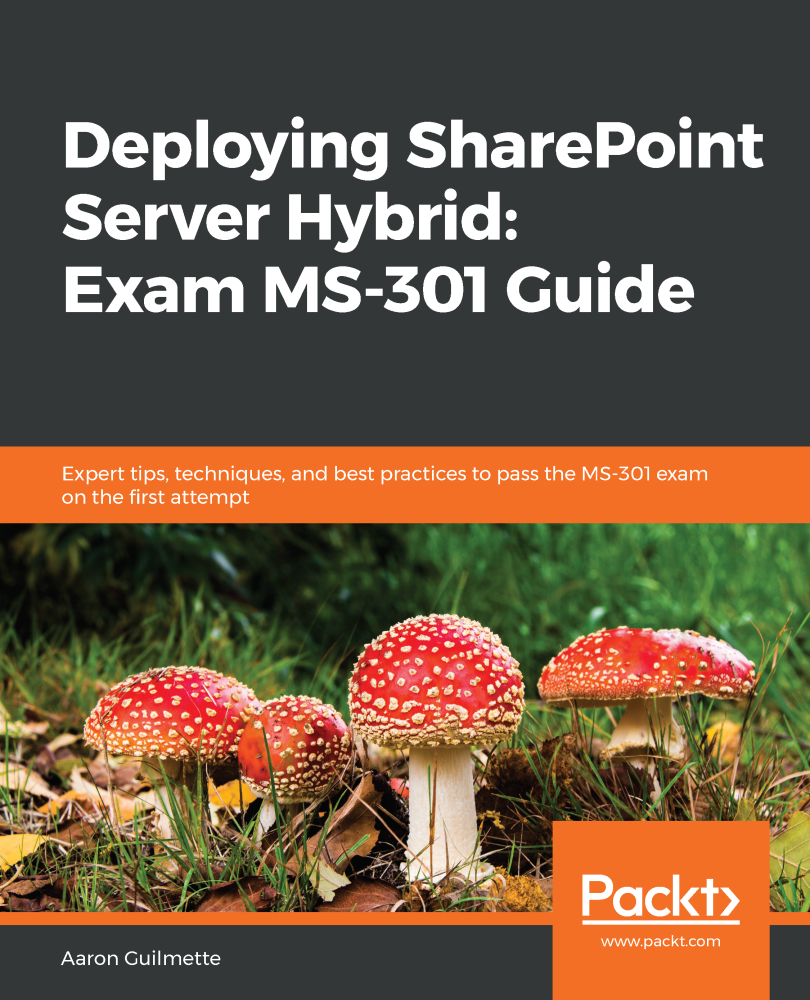 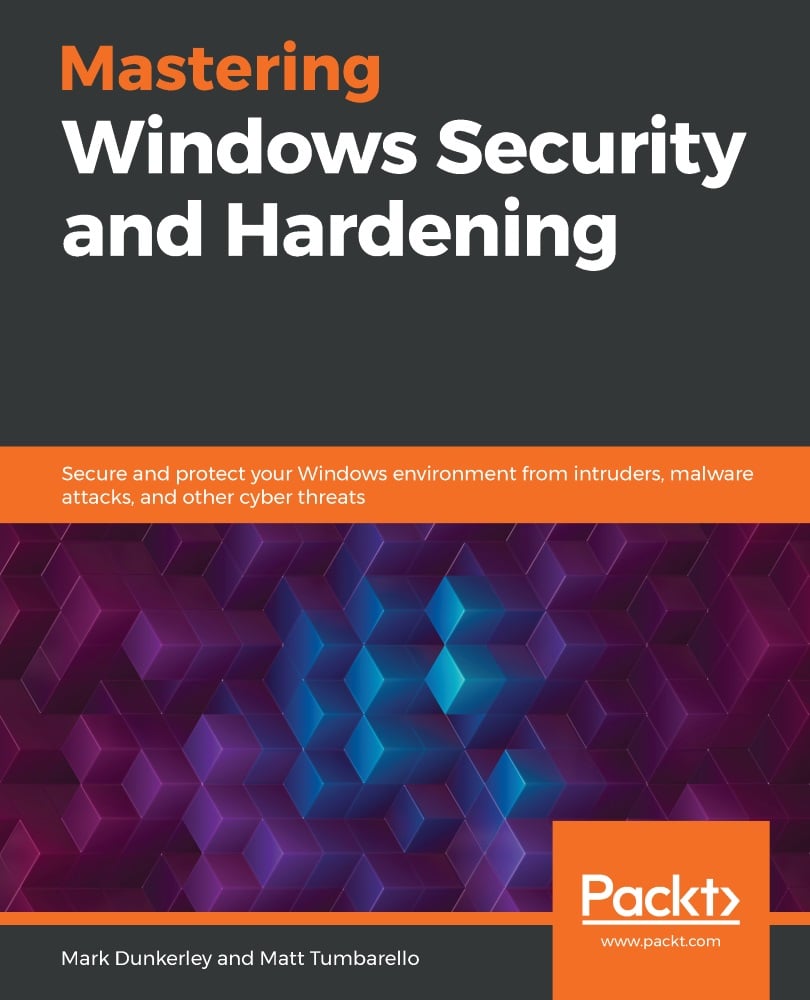 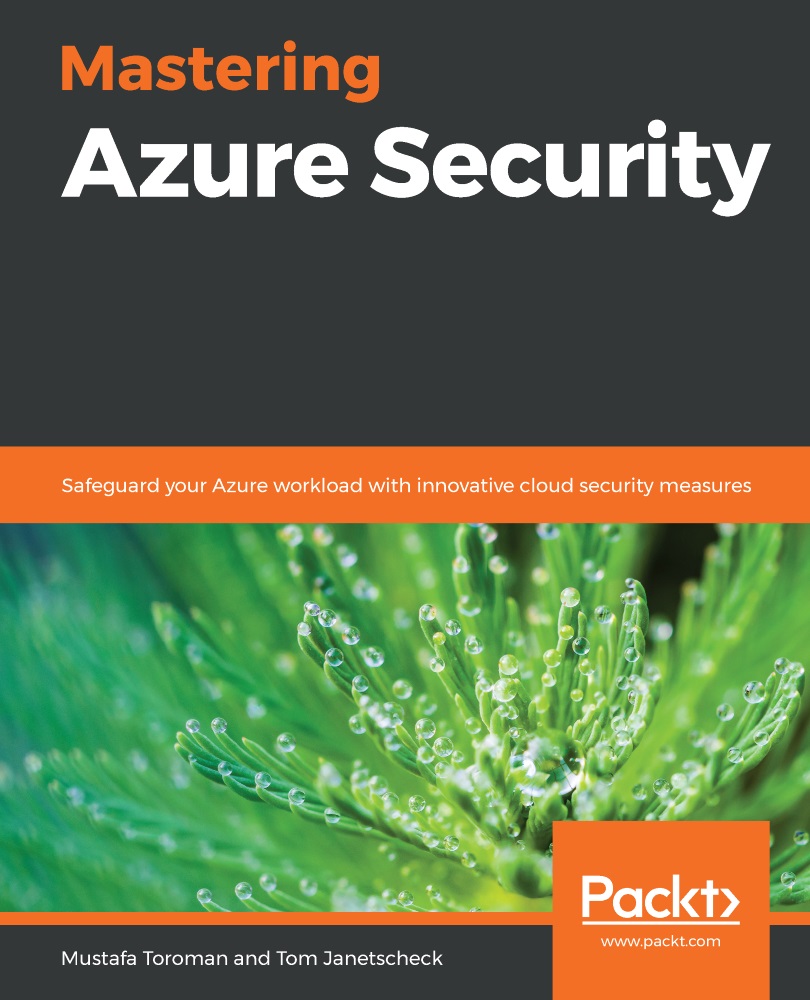 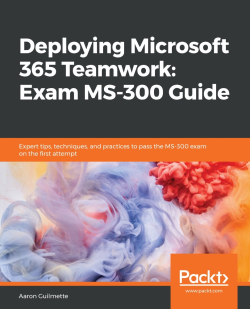