Tableau Public is a very useful tool in anyone's data reporting toolbox that allows authors to add an interactive data element to any article. It allows investigative journalists and bloggers to tell a “data story”, allowing others to explore your data visualization. The relative ease of Tableau Public visualization creation allows data stories to be developed rapidly. It allows readers to explore data associations in multiple-sourced public data, and uses state-of-the-art dashboard and chart graphics to immerse the users in an interactive experience.

The book takes you from basic concepts in visualization creation, like connecting to data sources, cleansing data, chart types, common functions, map creation, and publishing to the Web, to more advanced functions.

It is a great overview and reference guide for beginner to intermediate Tableau Public data story tellers, and covers creation of Tableau Public visualizations of varying complexities.


Chapter 1. Getting Started with Tableau Public

Making sense of data is a valued service in today's world. It may be a cliché, but it's true that we are drowning in data and yet, we are thirsting for knowledge. The ability to make sense of data and the skill of using data to tell a compelling story is becoming one of the most valued capabilities in almost every field, which includes business, journalism, retail, manufacturing, medicine, and public service. Tableau Public (for more information, visit www.tableaupublic.com), which is Tableau Software's free Cloud-based data visualization client, is a powerfully transformative tool that can be used to create rich, interactive, and compelling data stories. It's a great platform if you wish to explore data through visualization. It enables your consumers to ask and answer questions that are interesting to them.

This book is written for people who are new to Tableau Public and who would like to learn how to create rich, interactive data visualizations from publicly available data sources that they then can easily share with others. Once you publish visualizations and data to Tableau Public, they are accessible to, and can be viewed and downloaded by, everyone. A typical Tableau Public data visualization contains public data sets such as sports, politics, public works, crime, census, socioeconomic metrics, and social media sentiment data. You can also create and use your own data. Many of these data sets are either readily available on the Internet, or can be accessed via a public records request or search (if they are harder to find, they can be scraped from the Internet). You can now control who can download your visualizations and data sets, which is a feature that was previously available only to paid subscribers. Tableau Public currently has a maximum data set size of 10 million rows and/or 10 GB of data.

In this chapter, we will walk through an introduction to Tableau, which includes the following topics:

The people who are active members of the Tableau Public community have a few primary traits in common— they are curious, generous with their knowledge and time, and enjoy conversations that relate data to the world around us. Tableau Public maintains a list of blogs of data visualization experts who use Tableau Software.

In the following screenshot, Tableau Zen Masters Anya A'hearn of Databrick and Allan Walker used data on San Francisco bike sharing to show the financial benefits of Bay Area Bike Share, a city-sponsored 30-minute bike sharing program, as well as a map of both the proposed expansion of the program and how far a person can actually ride a bike in half an hour.

This dashboard is featured in the Tableau Public gallery because it relates data to users clearly and concisely. It presents a great public interest story (commuting more efficiently in a notoriously congested city) and then grabs the viewer's attention with maps of current and future offerings. The second dashboard within the analysis is significant, as well. The authors described the Geographic Information Systems (GIS), the tools that they used to create innovative maps, as well as the methodology that went into the final product so that the users who are new to the tool can learn how to create a similar functionality for their own purposes: 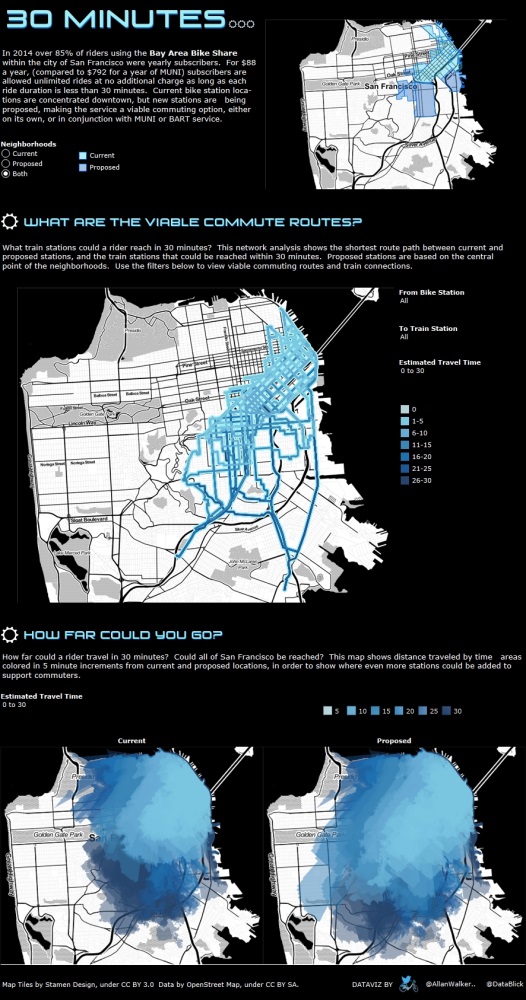 The preceding image is republished under the terms of fair use. It was created by Anya A'hearn and Allan Walker. (Source: https://public.tableausoftware.com/views/30Minutes___BayAreaBikeShare/30Minutes___?:embed=y&:loadOrderID=0&:display_count=yes.)

As humans, we relate our experiences to each other in stories, and data points are an important component of stories. They quantify phenomena and, when combined with human actions and emotions, can make them more memorable. When authors create public interest story elements with Tableau Public, readers can interact with the analysis, which creates a highly personal experience and translates into increased participation and decreased abandonment. It's not difficult to embed Tableau Public visualizations into websites and blogs. It is as easy as copying and pasting the JavaScript that Tableau Public automatically renders for you.

Using Tableau Public increases accessibility to stories too. You can view data stories on any mobile device with a web browser and then share it with friends via social media sites such as Twitter or Facebook using Tableau Public's sharing functionality. Stories can be told with text as well as popular and tried-and-true visualization types such as maps, bar charts, lists, heat maps, line charts, and scatterplots. Maps are particularly easier to build in Tableau Public than most other data visualization offerings because Tableau has integrated geocoding (down to the city and postal code) directly into the application. Tableau Public has a built-in date hierarchy that makes it easy for users to drill through time dimensions just by clicking on a button. One of Tableau Software's taglines, Data to the People, is a reflection not only of the ability to distribute analyses sets to thousands of people at once, but also of the enhanced abilities of nontechnical users to explore their own data easily and derive relevant insights for their own community without having to learn a slew of technical skills.

Telling your story with Tableau Public

The Tableau Software was originally imagined in the Stanford University Computer Science department, where a research project sponsored by the U.S. Department of Defense was launched to study how people can rapidly analyze data. This project merged two branches of computer science—the understanding of data relationships and computer graphics. This mash-up was discovered to be the best way for people to understand and sometimes digest complex data relationships rapidly and, in effect, help readers consume data. This project eventually moved from the Stanford campus to the corporate world, and Tableau Software was born. The usage and adoption of Tableau has since skyrocketed. At the time of writing this book, Tableau is the fastest growing software company in the world and now, Tableau competes directly with older software manufacturers for data visualization and discovery, such as Microsoft, IBM, SAS, Qlik, and Tibco, to name a few.

Most of these are compared by Gartner in its annual Magic Quadrant. For more information, visit http://www.gartner.com/technology/home.jsp.

Tableau Software's flagship program, Tableau Desktop, is a commercial software used by many organizations and corporations throughout the world. Tableau Public is the free version of Tableau's offering, and it is typically used with nonconfidential data either from the public domain or the one that we collected ourselves. This free public offering of Tableau Public is truly unique in the business intelligence and data discovery industry. There is no other software like it—powerful, free, and open to data story authors.

There are a few terms in this book that might be new to you. You, as an author, will load your data into a workbook, which will be saved into the Tableau Public Cloud.

A visualization is a single graph. It, typically present on a worksheet. One or more visualizations can be on a dashboard, which is where your users will interact with your data.

Tableau Public is used by some of the leading news organizations across the world, including The New York Times, The Guardian (UK), National Geographic (US), the Washington Post (US), the Boston Globe (US), La Informacion (Spain), and Época (Brazil). In the following sections, we will discuss installing Tableau Public. Then, we will take a look at how we can find some of these visualizations out there in the wild so that we can learn from others and create our own original visualizations.

Now, let's look at the installation steps for Tableau Public:

The Tableau Public home screen, as shown in the following screenshot, has several features that allow you to Connect to data, Open workbooks, and Discover the features of Tableau Public: 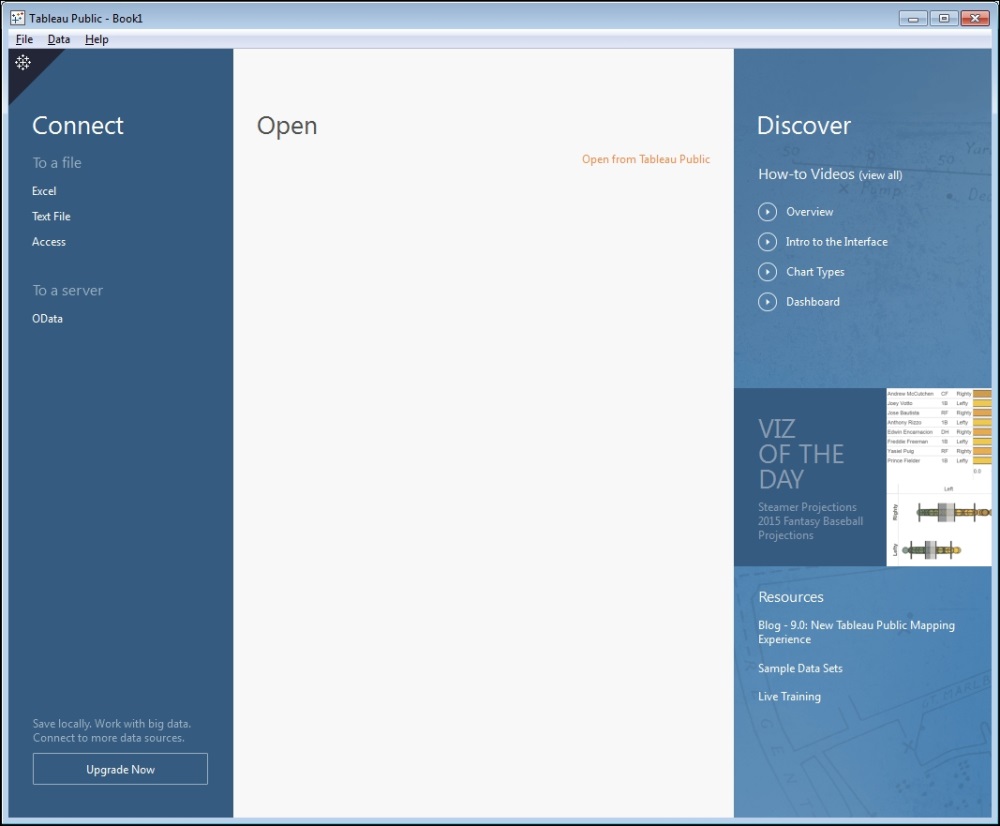 Tableau encourages new users to watch the video on this welcome page. To do so, click on the button named Watch the Getting Started Video. You can start building your first Tableau Public workbook any time.

You can connect to four different data source types in Tableau Public, as shown in the next screenshot, by clicking on the appropriate format name:

Chapter 2, Tableau Public Interface Features, focuses on connecting to data sources and explains this in detail.

Opening files and creating your profile

You can open the files that you create in Tableau Public by clicking on the Open from Tableau Public link. When you click on the link, Tableau Public will prompt you to log in with the e-mail address that you have used to create your account, as shown in the following screenshot: 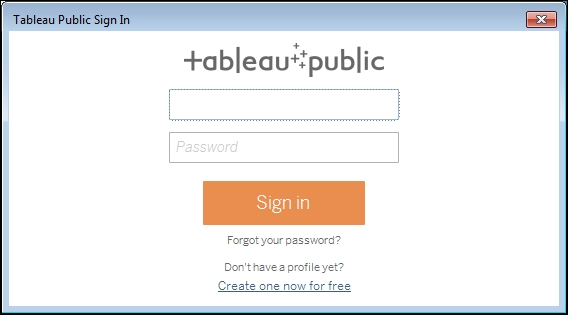 When you enter your e-mail and password, Tableau Public will verify it. Then, you will be able to select the file that you would like to open.

The list of files includes the names, modification dates, and size of the workbooks that you have saved in Tableau Public. It also includes the ability for you to search by entering a string of text.

When you find the workbook that you would like to open, click on Open, and then the most recently saved version will open in Tableau Public on your computer, as shown in the following screenshot: 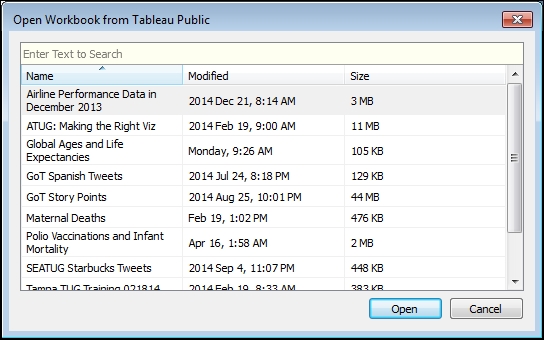 If you have not created an account, click on the link at the bottom of the screen that says Create one now for free.

The Create a Profile screen requires you to enter information in several fields, as shown in the following screenshot: 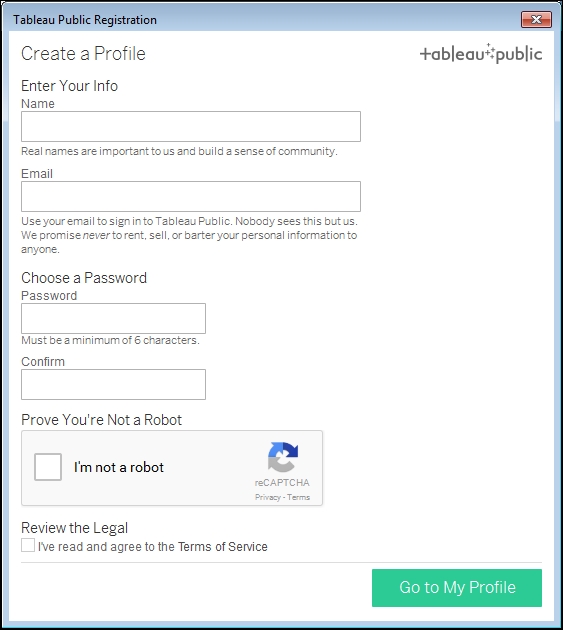 Now, let's look at each of these fields:

When you click on to Go to My Profile, your web browser will open your new profile page on Tableau Public. This is a page that displays information that you enter about yourself and your interests as well as a photograph of your choosing and links to other websites with which you're affiliated.

Your profile page also displays and allows you to manage your Tableau Public workbooks. We will discuss the profile in greater detail in Chapter 9, Publishing Your Work.

Let's take a look at each of these features:

Resources that you can open include the Tableau Public blog, sample Data Sets, and links to live training. You can view all of these on Tableau Public's resources page in your Internet browser by visiting https://public.tableau.com/s/resources.

Exploring the visualizations of other authors

To make use of a recommended authors and profile finder, visit https://public.tableau.com/s/authors.

The Tableau Public gallery is an excellent place to look at examples of works of others, and the Tableau Public team has curated a set of popular visualizations by topic and number of views.

The recommended authors page (https://public.tableau.com/s/authors) is a fun place to look at both well-known and established Tableau Public authors (bloggers, journalists, and the Tableau staff) as well as lesser known authors to explore their work. You can also access an author's profile page and see their work by clicking on the View Profile button under their name, as shown in the following screenshot: 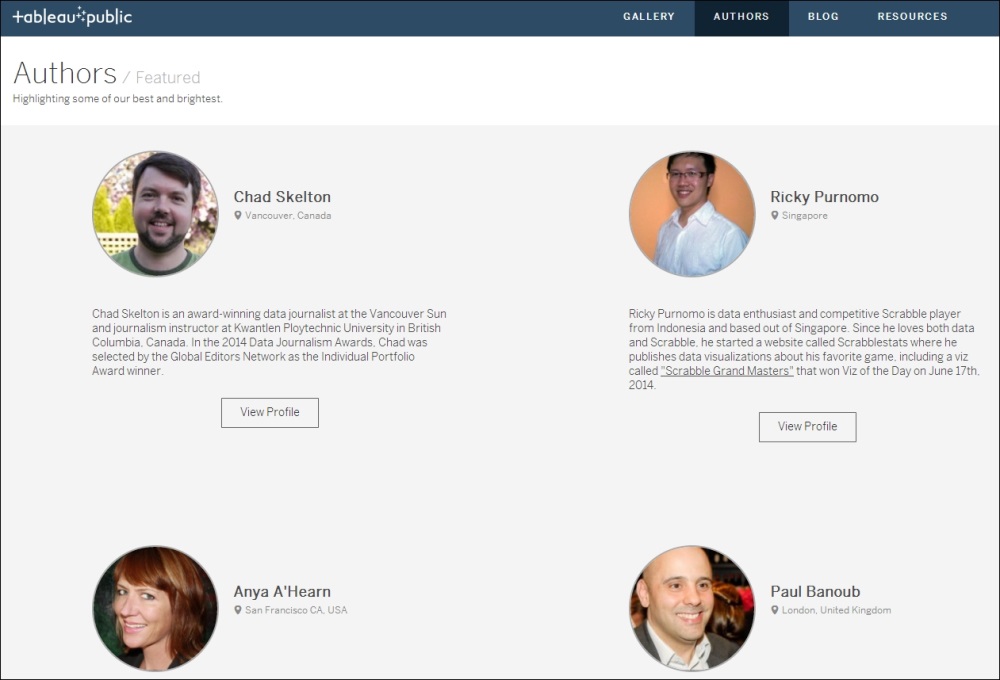 Read more Unlock this book with a 7 day free trial.
About the Authors
Very simple process, no problems! 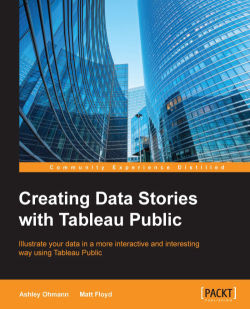