Functional programming enables developers to create and deploy applications quickly and easily. Using the Clojure programming language and the Leiningen build tool, this book teaches you how to leverage various Clojure libraries into the building blocks of a web-based application.

We'll start by generating a new, fully runnable, baseline web application using the Leiningen Luminus template. From there we'll examine the different pieces that compose our application, and learn the basics of the underlying Ring framework. Subsequent chapters will focus on each technology and leverage those technologies to build additional functionality into our application. You'll learn how to validate user submitted data, authentication, account creation, how to interact with a database, and more. Finally, we'll create an environment configuration and deploy our app.

By the end of this book you'll have created a full fledged application from start to finish, and you'll have the requisite skills to develop an efficient and robust web application.


Chapter 1. Getting Started with Luminus

Ah, getting started! This chapter introduces you to the foundations of Clojure web development using Luminus, a popular web application template for Leiningen. In this chapter, you will:

In this chapter, we'll create a new web application called hipstr, an application that will help us track our vinyl collection and endow us with obscure credibility. We'll build this application with each subsequent chapter by creating our own route handlers, interacting with a database, authenticating users, validating form input, and reading/writing cookies. By the end of this book, we'll know the Clojure web basics well enough that we'll be wearing plaid shirts and sipping bourbon aged in casks from a place nobody's ever heard of.

Our project will rely heavily on Leiningen, a build and task tool for Clojure. Leiningen allows us to easily maintain our application's dependencies, assists us in common tasks such as database migrations, running tests, producing binaries (jars and wars), and a plethora of other things. Leiningen is akin to Java's build tool Maven (http://maven.apache.org), and Ruby's Rake (http://github.com/jimweirich/rake). As Leiningen's web page (http://leiningen.org) concisely puts it: for automating Clojure projects without setting your hair on fire.

If you haven't already installed Leiningen 2.x, head over to http://leiningen.org/#install and follow the four simple instructions. It will take just 60 seconds, and the world of Clojure will become your oyster.

After you've installed Leiningen, you'll have access to a new command in your terminal, lein. Invoking this command will invoke Leiningen.

The basic makeup of a Leiningen task can be summarized as follows:

In the preceding shell pseudo-command, we invoke Leiningen using its binary. The lein $TASK argument is the Leiningen task we want to execute (such as install, jar, etc.), and $TASK_ARGUMENTS is any information required for that task to do its job, including additional subtasks and the arguments for a given subtask. You can see a full list of the available tasks in Leiningen by executing the following command:

You can also view the help content for a specific Leiningen task by executing the following command:

You can use these commands whenever you need to know how to do something in Leiningen.

Leiningen can generate an application skeleton (or scaffolding) from a plethora of different templates. There's a template for nearly everything such as clojurescript projects, web applications (of course), and much more.

To generate a new application, we use the new Leiningen task whose basic syntax is as follows:

The new task expects, at a minimum, a name for the project ($PROJECT_NAME). Optionally, we can provide a specific template to use ($TEMPLATE_NAME). If we don't specify a template, then lein will use the default template, which is a general template for developing libraries.

For our project we'll use the Luminus template, an excellent template for web applications. Luminus generates a project and wires in the libraries to support pretty much every aspect of web development including sessions, cookies, route handling, and template rendering.

This modification will ensure that version 1.16.7 of the Luminus template is used when generating a Luminus-based application.

The preceding command will generate a fully runnable application in a directory called hipstr. You can run the application by using cd hipstr to enter into the hipstr directory and then execute the following command:

In the preceding command line, the lein ring server command updates our class path with the dependencies required to compile and run the app. It then launches the development server (an embedded Jetty server) and starts serving on port 3000. Lastly, it launches our default web browser and navigates to the root page.

In the preceding example, ring is the Leiningen task, and server is the ring subtask. You can view a full list of ring subtasks by entering the lein help ring command in your terminal.

The subsequent output of lein ring server is a series of debug statements that lets us know what the heck is going on during the startup process. Any generated exceptions or problems that occur while attempting to launch the application will be emitted as part of this output.

Dependencies of the app

Luminus is a popular and active project, and is constantly getting better. Between now and the time this book goes to press and you purchasing one for each of your friends and yourself, it's possible that the template will have changed. At the time of writing, version 1.16.7 of the luminus template was used. If you used a more recent version your results may vary.

The first dependency should look familiar (if not, then this book isn't for you… yet). The rest, however, might appear to be a mystery. I'll spare you the effort of searching it online and break it down for you.

The luminus template generates web applications using a fairly typical directory structure. However, it also produces a number of Clojure namespaces that can cause a bit of confusion if you're brand new to Clojure web development. You can either open the project using your favorite Clojure editor, or do the following from the terminal:

In either case, you should see output similar to the following: 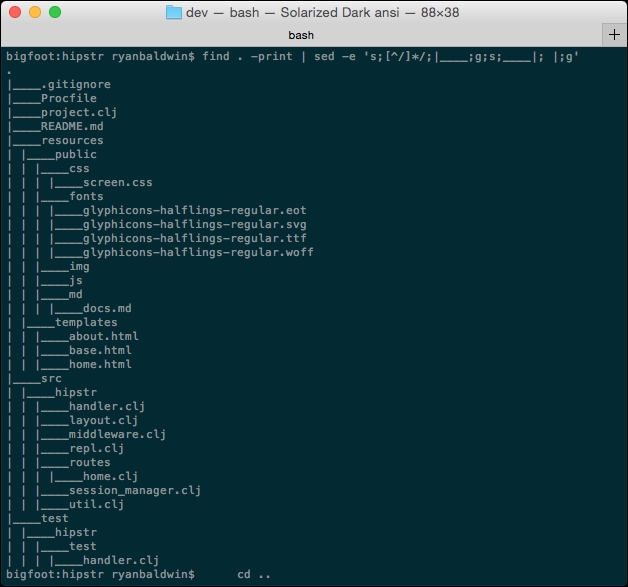 Luminus generates three directories at the root of the application directory: resources, src, and test.

The resources directory contains the files that will compose the front end of our applications. The public folder contains resources publicly available to the client, such as our JavaScript, CSS, and images. By contrast, the templates directory contains our Selmer templates used for the heavy rendering of HTML parts. All of these files will be made available on our class path; however, only those in the public folder will be actually available to the client.

In addition to the directories, however, Luminus also generated some files in the src directory. These files are the bare minimum requirement to successfully run our application, and each one handles specific functionality. Let's take a brief look at the base functionality contained in each file.

The hipstr.util namespace is a simple namespace where you can put various helper functions you find yourself frequently using during the development of your application. Out of the box, Luminus generates a hipstr.util namespace with a single function, md->html, which converts markdown into HTML. Typically, I try to avoid namespaces such as util.clj because they eventually turn into the junk drawer in your kitchen, but they can be useful on smaller projects if things don't get too crowded. The following block of code shows the hipstr.util namespace:

One of lib-noir's exposed functionalities is session management (which we'll discuss in detail in Chapter 10, Sessions and Cookies). The default session pool in Luminus is an in-memory session pool, a shortcoming of which is that expired sessions are only removed from memory when the server handles a request associated with an expired session. As a result, old stale sessions can linger in memory indefinitely, straining memory resources on the server. Luminus boilerplates a cronj job in the hipstr.sessions-manager namespace, which occasionally removes stale, unused sessions. By default, the job runs every 30 minutes. Take a look at the following lines of code:

The key to the hipstr.layout namespace is that it remains high level and generic. You should avoid writing functions with domain knowledge in this namespace, and instead focus on generating response bodies. If you put an explicit URL or filename in this namespace, you're probably doing it wrong.

Middleware, for the unfamiliar, is a function that can work with an incoming request prior to the request being handled by the main application (that is our proverbial business logic). Its function is similar to how a car moves through an assembly line; each employee working the line is responsible for interacting with the car in some specific way. Much like how at the end of the assembly line the car is in its final state and ready for consumption, so is the request in its final state and ready for processing by the main application. The following code is for the hipstr.middleware namespace:

One of the directories that Luminus generated was a route folder. Routes are what tie a request to a specific handler (or, in layman's terms, a chunk of code to be executed based on the URL the request is sent to). Luminus generates 2 routes for us:

Take a look at the following lines of code:

We will create a couple of our own routing namespaces over the course of this book. The routes we'll create in those namespaces will follow the same pattern demonstrated in the preceding hipster.routes.home namespace. We'll talk a bit more about routes in Chapter 4, URL Routing and Template Rendering.

Everything we've seen in this chapter is brought together into a single, harmonious, running application in the hipstr.handler namespace, explained in the following lines of code. Opening the file for a cursory scan reveals our cron job to clean up expired sessions, the home-routes from the hipstr.routes.home namespace, the configuration of our Timbre logging, and so on.

We'll get into detail about what all is happening, and when, in Chapter 2, Ring and the Ring Server.

The last Luminus generated namespace, hipstr.repl, is one that often confuses beginners because it's strikingly similar to hipster.handler. The hipstr.repl namespace has a start-server and stop-server function, much like hipster.handler. However, hipstr.repl allows us to start and stop our development server from the Clojure REPL. This might seem like a weird thing to do, but by running our server from the REPL we can modify our running system and the changes will be "automagically" reloaded in our server. No need for the time consuming and frustrating "compile-deploy-restart-grab-a-coffee-and-twiddle-your-thumbs cycle!"

Incorporating the REPL into your development workflow is a wonderful thing to do. You can load your namespace into the REPL while you work on it and test the code while you're developing right then and there. In fact, some IDEs such as LightTable take this a step further, and will "live-evaluate" your code as you type. The ability of running the dev server from the REPL completes the circle.

If you're not currently using a decent IDE for Clojure development, I strongly encourage you to give LightTable a try. It's free, open source, lightweight, and very different than anything you're used to. It's quite good. Check it out at http://www.lighttable.com.

In this chapter, you learned how to generate a new Clojure-based web application using Leiningen and the Luminus template. We also got a high-level understanding of each dependency, and how Luminus structures its projects. In the next chapter we'll take a detailed look at the Ring and Ring Server libraries, and what they're responsible for. It sounds a little dry, I know, but I recommend that you read it. There will be cake and punch at the end, but without all the calories of cake and punch. 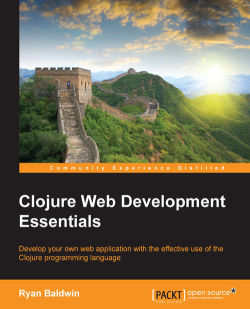