By the end of the book, you will be equipped with the knowledge required to build scalable and cost-efficient Python applications with a serverless framework.

It is not uncommon to have idle resources and servers in production idle after the server workload has finished, or waiting for the next workload to come. This introduces a bit of redundancy in the infrastructure. What if there was no need for idle resources lying around when there is no workload? What if resources can be created when necessary and be destroyed once the work is done?

At the end of this chapter, you will understand how serverless architectures and functions as a service work, and how you can build them into your existing software infrastructure. You will also learn what microservices are, and decide whether microservices or serverless operations are well-suited for your architecture or not. You will also learn how to build serverless applications with Python on major cloud service providers, such as Amazon Web Services (AWS) and Microsoft's Azure.

This chapter will cover the following points:

"Serverless computing, also known as function as a service (FAAS), is a cloud computing and code execution model in which the cloud provider fully manages starting and stopping of a function's container platform as a service (PaaS)."

Now, let's go into the details of each part of that definition to understand the paradigm of serverless computing better. We shall start with the term function as a service. It means that every serverless model has a function that is executed on the cloud. These functions are nothing but blocks of code, that are executed depending on the trigger that is associated with the function. This is a complete list of triggers in the AWS Lambda environment: 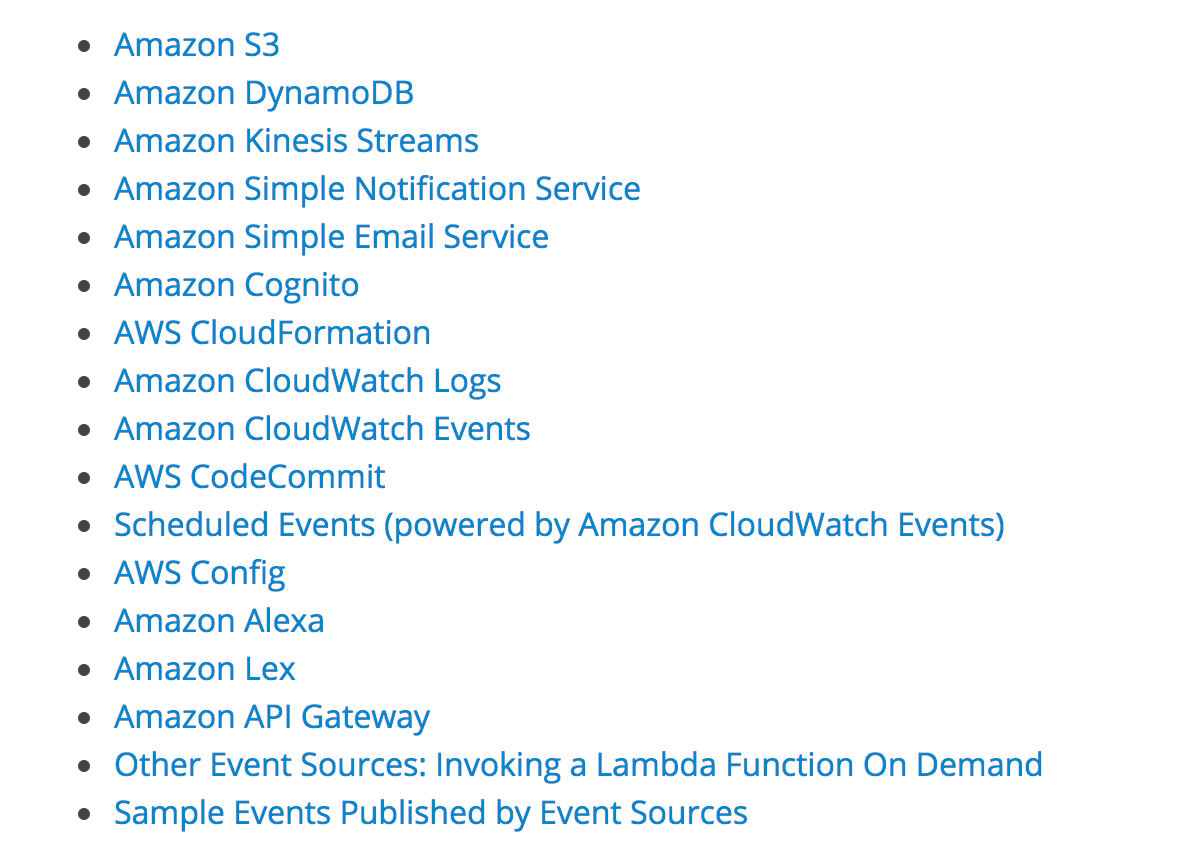 Now let's understand what manages the starting and stopping of a function. Whenever a function is triggered via one of these available triggers, the cloud provider launches a container in which the function executes. Also, after the function is successfully executed the function has returned something, or if the function has run out of time, the container gets thatched away or destroyed. The thatching happens so that the container can be reused in the event of high demand and whenever there is very little time between two triggers. Now, we come to the next part of the sentence, the function's container. This means that the functions are launched and executed in containers. This is the standard definition of a container from Docker, a company that made the concept of containers very popular:

"A container image is a lightweight, stand-alone, executable package of a piece of software that includes everything needed to run it: code, runtime, system tools, system libraries, settings."

So, we can clearly make out that there are no servers running round the clock in the case of serverless infrastructures. There is a clear benefit for this, which includes not having a dedicated Ops team member for monitoring the server boxes. So the extra member, if any, can focus on better things, such as software research, and so on. Not having servers running through the entire day saves a lot of money and resources for the company and/or personally. This benefit can be very clearly seen among machine learning and data engineering teams who make use of GPU instances for their regular workload. So having on-demand serverless GPU instances running, saves a lot of money without the developers or the Ops team needing to maintain them around the clock.

"Microservices, also known as the microservice architecture, is an architectural style that structures an application as a collection of loosely coupled services, which implement business capabilities."

Microservices help software teams stay agile, and improve incrementally. In simpler terms, as the services are decoupled from each other, it is very easy to upgrade and improve a service without causing the other to go down. For example, in social network software, if the chat and the feed are both microservices, then the feed doesn't have to go down when the software team are trying to upgrade or do minor fixes on the chat service. However, in large monolithic systems, it is difficult to break things up so easily in the way one can do with microservices. So, any fix or upgrade on even a small component of the architecture comes with downtime with the fix taking more time than intended.

The sheer size of the code base of monolithic architectures itself acts as a hindrance progress in the case of any small failures. Microservices, on the other hand, greatly help in boosting developer productivity by keeping code bases lean, so that they can fix and improve the service with very little or no overhead and downtime. Microservices can be much better leveraged via containers, which provide effective and complete virtual operating system environments, processes with isolation, and dedicated access to underlying hardware resources.

However, microservices come with their own bunch of disadvantages and downsides, the major one being having to deal with distributed systems. Now that each service is surviving on its own, the architect needs to figure out how each of them interacts with the others in order to make a fully functional product. So, proper co-ordination between the services and the decisions regarding how services move data between them is a very difficult choice that needs to be taken by the architect. Major distributed problems such as the consensus, the CAP theorem, and maintaining the stability of consensus, and the connection, are some issues that the engineer needs to handle while architecting for microservices. Ensuring and maintaining security is also a major problem in distributed systems and microservices. You needs to decide on separate security patterns and layers for each microservice, along with the security decisions necessary for the data interaction to happen between the services.

Serverless architectures generally are leveraged as real-time systems as they work as a function as service which is triggered by a set of available triggers. However, this is a very common misconception, as serverless systems can be leveraged equally well both as real-time and batch architectures. Knowing how to leverage the concept of serverless systems as batch architectures will open up many engineering possibilities, as all engineering teams don't necessarily need or have real-time systems to operate.

Serverless systems can be batched by leveraging the following:

Firstly, let's understand the concept of the cron facility in triggers. Serverless systems on the cloud have the ability to set up monitoring, which enables the trigger to get triggered every few minutes or hours and can be set as a normal cron job. This helps in leveraging the concept of serverless as a regular cron batch job. In the AWS environment, Lambda can be triggered as a cron via AWS CloudWatch, by setting the frequency of the cron by manually entering the time interval as the input and also by entering the interval in the cron format: 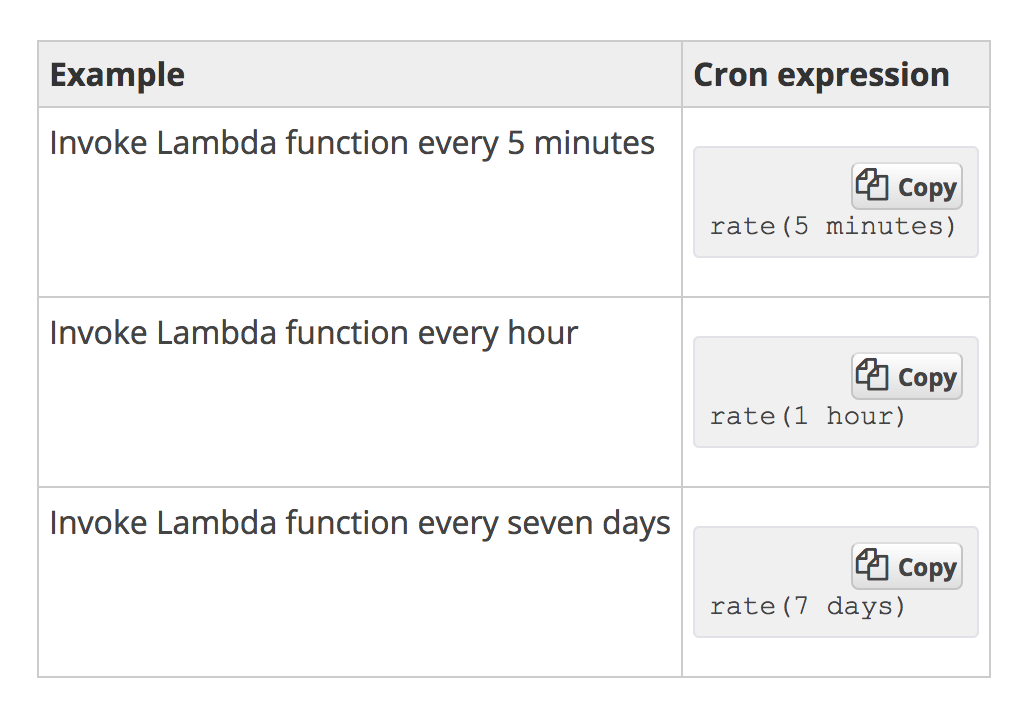 One can also leverage the concept of queues when building serverless batch architectures. Let's understand this by setting an example data pipeline. Let's say the system which we intend to build does the following tasks:

As we now understand what serverless architectures and pipelines look like, how they may be leveraged into existing architectures, and also how microservices help keep architectures leaner and boost developer productivity, we shall look at the pros and cons of serverless systems in detail, so that software developers and architects can make decisions regarding when to leverage the serverless paradigm into their existing systems and when not to.

The positives of serverless systems are:

The disadvantages of serverless systems are:

However, serverless systems can be scaled up to distributed systems for large- scale computations where the developer need not worry about the time limit. As already mentioned, this will be discussed in detail in the upcoming chapters. However, for insight into an intuition on how one can choose serverless systems over monolithic systems for large-scale computations, let us understand some important pointers that need to be kept in mind when taking that architectural decision.

The pointers to be kept in mind when scaling serverless systems to distributed systems are:

In this chapter, we learned what serverless architecture is. Most importantly, the chapter helps architects decide if serverless is the way forward for their team and their engineering, and how to transition/migrate from their existing infrastructure to a serverless paradigm. We also looked at the paradigm of microservices and how they help make lightweight and highly agile architectures. This chapter also went into great detail about when a team should start thinking about microservices and when can they migrate or break their existing monolith(s) into microservices.

We then learned the art of building batch architectures in the serverless domain. One of the most common myths is that serverless systems are only for real-time computation purposes. However, we have learned how to leverage these systems for batch computations too, thus facilitating a whole lot of applications with the serverless paradigm. We looked at the pros and cons of going serverless so that better engineering decisions can be taken accordingly.

In the next chapter, we will cover a very detailed understanding of how AWS Lambda works, which is the core component of serverless engineering in the AWS cloud environment. We will understand how triggers work and how AWS Lambda functions work. You will learn about the concept of leveraging containers for executing serverless functions and the associated computational workload. Following that, we will also learn about configuring and testing Lambda functions, along with understanding the best practices while doing so. We will also cover versioning Lambda functions, in the same way versioning is done in code, and then create deployment packages for AWS Lambda, so that the developer can accommodate third-party libraries comfortably, along with the standard library ones. 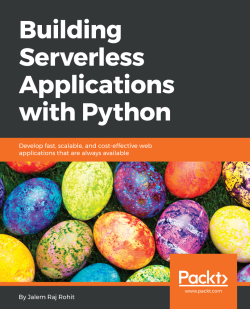