REST is an architectural style that tackles the challenges of building scalable web services. In today's connected world, APIs have taken a central role on the web. APIs provide the fabric through which systems interact, and REST has become synonymous with APIs.The depth, breadth, and ease of use of Spring makes it one of the most attractive frameworks in the Java ecosystem. Marrying the two technologies is therefore a very natural choice.This book takes you through the design of RESTful web services and leverages the Spring Framework to implement these services. Starting from the basics of the philosophy behind REST, you'll go through the steps of designing and implementing an enterprise-grade RESTful web service. Taking a practical approach, each chapter provides code samples that you can apply to your own circumstances.This second edition brings forth the power of the latest Spring 5.0 release, working with MVC built-in as well as the front end framework. It then goes beyond the use of Spring to explores approaches to tackle resilience, security, and scalability concerns. Improve performance of your applications with the new HTTP 2.0 standards. You'll learn techniques to deal with security in Spring and discover how to implement unit and integration test strategies.Finally, the book ends by walking you through building a Java client for your RESTful web service, along with some scaling techniques using the new Spring Reactive libraries.

In the early days of web services, Simple Object Access Protocol (SOAP) was the default choice for all backend developers who dealt with web service consumption. SOAP was mainly used in HTTP and Simple Mail Transfer Protocol (SMTP) for message transmission across the same or different platforms. When there was no JavaScript Object Notation (JSON) format available for web services, XML used to be the only available format SOAP could use for the web service consumption.

However, in the JSON era, Representational State Transfer (REST) started dominating web service based applications, as it supports multiple formats, including JSON, XML, and other formats. REST is simpler than SOAP, and the REST standards are easy to implement and consume. Also, REST is lightweight as compared to SOAP.

Contrary to popular belief, REST is not a protocol, but an architectural principle for managing state information. It's mainly used in web applications. REST was introduced by Roy Fielding to overcome implementation difficulties in SOAP. Roy's doctoral dissertation made for an easy way to retrieve data, regardless of the platform used. You will see all the components of RESTful web services in the following sections.

In REST principles, all resources are identified by the Uniform Resource Identifier (URI).

HTTP REST resources are represented in some media types, such as XML, JSON, and RDF. Also, RESTful resources are self-descriptive, which means enough information is given to describe how to process the request.

In another REST principle, the clients interact with servers through hypermedia, which is dynamically provided by the servers. Other than endpoints, clients don't need to know how to interact with RESTful services. This principle is referred to as Hypermedia as the Engine of Application State (HATEOAS).

This principle has significant advantages for scalability. Caching techniques will be discussed in Chapter 8, Performance.

Since REST typically leverages HTTP, it inherits all the caching properties that HTTP offers.

Code on demand (COD) is considered an optional principle. Servers can extend the functionality of clients by transferring executable code. For example, JavaScript can be provided to web-based clients to customize the functionality. As code on demand reduces the visibility of the client side, this constraint is optional. Also not all APIs need this feature.

In web applications, REST is typically used over HTTP. REST doesn't need to be tied to any specific protocol. In HTTP REST, we mainly use the GET, POST, PUT, and DELETE methods to change the state of the resources we access. Other HTTP methods, such as OPTIONS, HEAD, CONNECT, and TRACE, can be used for more advanced operations, for example, for caching and debugging purposes. Most servers have disabled advanced methods for security and simplicity reasons; however, you can enable them by adjusting the server configuration files. As JSON is used as a primary media type for major applications, we also use only the JSON media type for our web service calls.

This is perfectly alright in the traditional programming world. However, we might need a scenario where we should be able to follow up x when we change the value of y or z.

Our new scenario based values are:

We will discuss more about Reactive in Java and Spring later in this chapter.

Reactive Streams are all about processing an asynchronous stream of data items, where applications react to data items as they receive them. This model is more memory-efficient, as it doesn't rely on any in-memory data.

The Reactive Streams approach is supported by engineers at Netflix, Pivotal, Twitter, Oracle, and TypeSafe. Especially, TypeSafe contributed more to Reactive Streams. Even Netflix engineers say, in their own words:

“Reactive programming with RxJava has enabled Netflix developers to leverage server-side concurrency without the typical thread-safety and synchronization concerns.”

The following are the benefits of Reactive programming:

Reactive principles are used in real-time cases such as live database queries, big data, real-time analytics, HTTP/2, and so on.

Reactive programming in Java and Spring 5

Also, Pivotal introduced the Reactor framework, which is built directly on Reactive Streams, avoiding the external bridge to Reactive Streams. A Reactor is considered as a 4th generation library.

Finally, Spring Framework 5.0 added Reactive features built into it, including the tools for HTTP servers and clients. Spring users find annotations and controllers handy when they deal with HTTP requests, especially dispatching Reactive requests and back pressure concerns to the framework.

The Reactive model seems to be efficient in resource utilization, as it can process higher loads with fewer threads. However, the Reactive model may not be the right solution for all problems. In some cases, Reactor may make things worse if we use it in the wrong section.

As we assume that our readers are familiar with Spring Framework, we will directly focus on the example service that we are going to build.

Let's assume that we have a banking web application used by our customers, Peter and Kevin, and we have Sammy, our admin, and Chloe, the customer service representative (CSR), to help in case of any banking application issues.

If Kevin/Peter is facing a problem in the web application, they can create a ticket in our Ticket Management System. This ticket will be handled by the admin and sent to CSR, who handles the ticket.

The CSR gets more information from the user and forwards the information to the technical team. Once the CSR resolves the issue, they can close the issue.

In our Ticket Management System we will be using the following components:

In this Ticket Management System, we will focus on:

In the next chapter, we will talk about simple project creation with Maven and the simple REST API. Also, we will discuss Maven file structure and dependencies, including samples.

Practical and hands-on but a bit rushed. 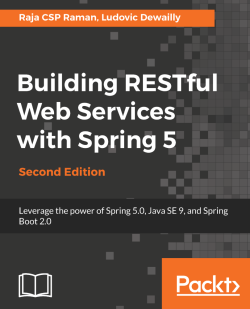