Micronaut is a JVM-based framework, designed to create microservices quickly and easily. This book will help full-stack and Java developers to build modular, high-performing, and reactive microservice-based apps using Micronaut.

You'll start by building microservices and learning about the core components of Micronaut, such as ahead-of-time compilation, reflection-less dependency injection, and reactive baked-in HTTP clients and servers. Next, you will work on a real-time microservice application and learn how to integrate Micronaut with different kinds of relational and non-relational databases. You'll also learn how to employ different security mechanisms to safeguard your microservices and integrate microservices using event-driven architecture in the Apache Kafka ecosystem. As you advance, you'll get to grips with automated testing and popular testing tools. The book will help you understand how you can easily handle microservice concerns in the Micronaut framework, such as service discovery, API documentation, distributed configuration management, fallbacks, and circuit breakers. Finally, you'll explore the deployment and maintenance aspects of microservices and get up to speed with the Internet of Things (IoT) using Micronaut.

By the end of this book, you'll be able to build, test, deploy and maintain your own microservice apps using Micronaut. 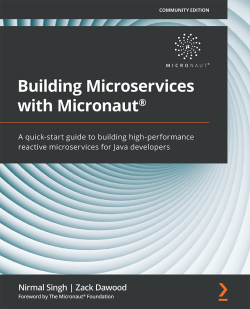