One of the best kept secrets of the security industry is just how simple the monitoring hardware actually is - BeagleBone has all the computing power you need to build yourself an extremely sophisticated access control, alarm panel, and home automation and network intrusion-detection system. Security companies make a fortune each year by charging exorbitant fees to their customers. You will learn how easy it is to make an alarm system with Beaglebone.

A company-maintained-and-monitored alarm system has its place - your dear old mum is probably not going to be creating her own system any time soon. But if you are reading this book, you are probably a builder or a hobbyist with all the skills required to do it yourself. With Building a Home Security System with BeagleBone, you will learn everything you need to know to develop your own state-of-the-art security system, all for less than a year’s worth of monitoring charges from your local alarm company!

You will start by building and testing your hardware and open source software on an experimenter’s prototype board before progressing to more complex systems. You will then learn how to test your new creations in a modular fashion and begin to utilize BeagleBone. Once your system is built and tested, you will install some of the professional-grade sensors used in modern alarm systems and learn how to use them. You will also discover how to extend your alarm system in a variety of different ways. The only limit will be your imagination.

In this chapter, we will cover the major components that almost all alarm systems have in common. By the end of the chapter you will realize that the so-called high tech alarm systems and access control systems are not really as complicated as some would like you to believe.

That said, let's get started.

Every alarm system in the world does two and only two basic things.

It doesn't matter if it is the Bank of England or your cottage in Kent, the only major difference is how sophisticated (expensive) the sensors are and how fancy (expensive) the monitoring software is!

Also, I'm sure many of you have seen Tom Cruise drop from the ceiling to avoid the laser grid in Mission Impossible. You could have caught him with a $20 PIR motion sensor and saved yourself the price of the fancy lasers!

In my experience, you don't have to be an electrical engineer to install an alarm system, just a good carpenter, painter, and plasterer! By the way, I'm not, so I'll leave it up to you to hide the wires.

Also, because our alarm system runs on 12 volts, you don't have to be a licensed electrician to install it. If you can plug in a "wall wart" you are there! Fascinated yet? Read on….

And now, more on sensors and how they work.

The first sensor we will talk about is the door/window contact switch. This is by far the most common type of sensor used in the alarm industry. There are several variations of this sensor, but they all function in the same way. For example, you can buy a garage door sensor that has a large magnet and is physically large, so that when the wind sways your garage door, the rattling won't set off the alarm. 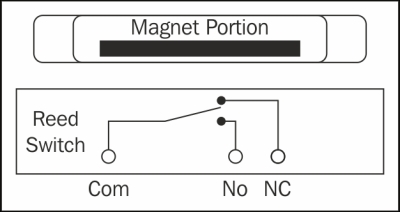 The preceding diagram shows a standard door or window sensor. Usually the contact position is when the reed switch is energized (the window is closed). If you aren't sure, check with an ohm meter.

You can think of a sensor as a magnetically operated single pole double throw (SPDT) switch. In fact, for testing purposes, you can use a toggle switch to simulate door and window contacts.

Remember what I said about carpentry? 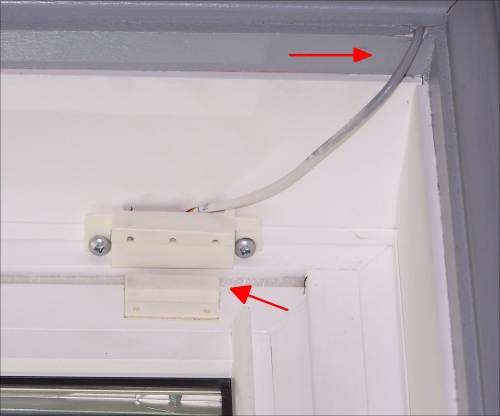 The next most common sensor is the passive infrared motion sensor or PIR.

It is called a passive infrared sensor because it does not transmit anything. If, for example, it used an IR laser, it would be an active sensor. PIRs come in many shapes, sizes, and price ranges. Many of the more expensive models can be configured so that the family pet does not activate the sensor.

A passive infrared sensor measures the ambient heat in the room and then waits for a warmer body to pass across its viewing area. The resulting "blip" in the ambience is what it detects. 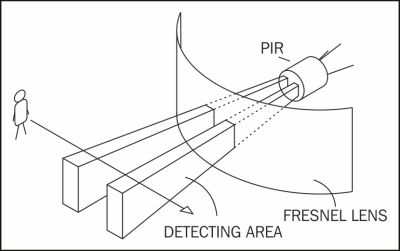 A Fresnel lens and a parabolic mirror are often used to extend the range of the sensor. Think of it as a flashlight in reverse. Instead of concentrating the light from the bulb into a beam, the ambient IR focuses on the sensor. In the preceding diagram, the mirror would be behind the Fresnel lens. The Fresnel lens acts like a camera lens to give the sensor a wider field of view. This is an extremely simplified explanation. Modern PIRs use digital signal processing to help eliminate false triggering. All you need to worry about is the field of view of the PIR, because that is what you will use when you install your PIRs. Most PIRs have about a 90 or 120 degree field of view. It is also possible to buy a PIR with a 360 degree field of view. This device looks like a dome, and mounts in the center of the room on the ceiling.

No matter how fancy the innards, in the end the result is a pair of contacts for your panel to read.

The next type of sensor that should be of interest to the reader is the glass break detector. This detector replaces the foil tape that you may have seen on the front windows of many stores. This tape was a pain to apply properly and depending on the climate, could dry out and crack. 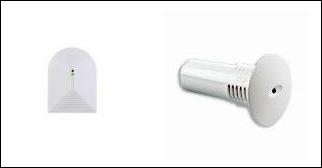 The sound of breaking glass is picked up by the microphone, amplified, and then filtered and detected by the software of the sensor.

Once again, the result is a set of contacts that open and close to indicate an alarm to your panel.

The final sensor of interest is the temperature rise sensor. This sensor is replacing the ionization type smoke detector in many modern buildings. Unlike a cheap ionization type of smoke detector, burning toast won't set it off! Much like the PIR and the glass break detector, it uses digital signal processing to sense a rapid rise in the ambient temperature, which would indicate a fire.

Also like the other detectors, it signals the panel by opening and closing a set of contacts. 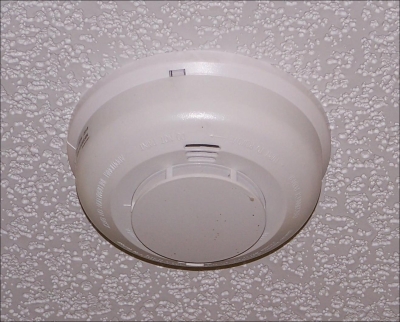 In this chapter we covered the four most common sensors found in the average home or small business areas, and briefly discussed how they work. These sensors, with the exception of door contacts, come in all different shapes, sizes, and models.

For example, there are a number of different models of PIRs. Some are "pet tolerant", meaning that a dog or cat won't set them off in the middle of the night.

Well, maybe not exactly a fact, but I've been told that in tropical climates, small lizards crawling across a PIR have set it off. I suppose that a gecko up close to the sensor looks like Godzilla!

In the next chapter we will be learning the theory behind our first alarm system. We will also be writing some simple code to simulate a one-zone alarm system, using the built-in IDE of BeagleBone. 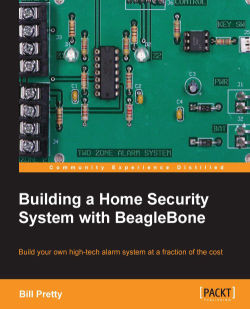