Sql Server Integration Services (SSIS) is a comprehensive ETL tool that made its debut with SQL Server 2005. It is a tool tightly integrated with the Visual Studio 2005 having all the functionalities that its forerunner DTS (Data Transformation Services) had in SQL Server 2000. This does not mean that it is just an improvement over DTS but a product which is totally different with a vastly improved interface; an extensible architecture; an enlarged tool set; ease of integration with other SQL Server Tools such as Analysis Services; capable of supporting connectivity with third party databases and bringing into a central location many database management tasks.

The Beginners Guide to SQL Server Integration Services Using Visual Studio 2005 provides you with the basic knowledge that you should have before you move on to more advanced ETL [Extraction, Transformation, and Loading]. The book will also provide you with a comprehensive description of the many designer windows that you may encounter while working with the designer.

This guide provides you with the blocks to build a complete package. It describes each block using examples as well as detailing the nuts and bolts that hold the blocks in place. The majority of SSIS tasks are covered in this book, which are described in full in the summary of Table of Contents. You will start building packages right from Chapter 2 and continue on to Chapter 20 gathering and building upon your knowledge in each step. 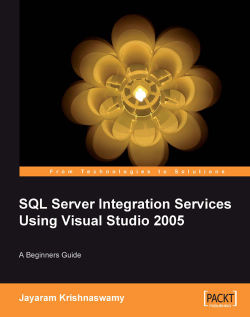