This book is a one-stop guide on managing Microsoft Azure services using PowerShell. Administrators and developers will learn how to use PowerShell to create and manage Azure websites, virtual machines, SQL databases, and so on.

Starting with an introduction to Windows PowerShell, this book will assist you in connecting to Microsoft Azure with PowerShell. Next, the book covers how to create and manage Azure storage accounts, including file, blob, and table storage. Moving on, this book covers creating and managing Azure virtual machines, SQL databases, websites, virtual networks, traffic manager, cloud services, and Active Directory. Finally, this book covers how to automate complex tasks using Azure automation runbooks.


Chapter 1. Getting Started with Azure and PowerShell

Microsoft Azure (formerly Windows Azure) is a cloud computing service provided by Microsoft. Azure provides the platform and infrastructure to deploy and manage applications and services through a global network of datacenters. These services include websites, databases, virtual machines, message queuing, identity management, content delivery, and so on.

With Microsoft Azure geared to supplement and integrate into the infrastructure of large enterprise organizations, many organizations apply their data center operation policies and methodologies to their Azure implementations. For many of these organizations, scripting deployment, configuration, and management tasks is a must.

Much like other Microsoft server products (Exchange Server and SharePoint Server for example), Microsoft Azure services and products can be instantiated, configured, and managed using Windows PowerShell. Using PowerShell, we can automate and script many of the deployment, configuration, and management tasks that are common to data center operations.

Windows PowerShell is an automation and configuration framework provided by Microsoft. It comprises a command-line shell and a scripting language built on the Microsoft .NET Framework. The commands used in PowerShell are referred to as cmdlets and, typically, have a verb prefix followed by a topical command name. For instance, the cmdlet to add a computer to an Active Directory domain is Add-Computer.

Nearly all Microsoft-provided cmdlets for PowerShell include help content that can be accessed using the Get-Help cmdlet. To retrieve help content for the Add-Computer cmdlet, for instance, you would simply enter Get-Help Add-Computer.

The following screenshot shows what the PowerShell Command Prompt looks like. The default color scheme for PowerShell windows is gray text on a dark blue background; for clarity, however, when printed or viewed in black and white, the screenshots used in this book use black text on a white background. 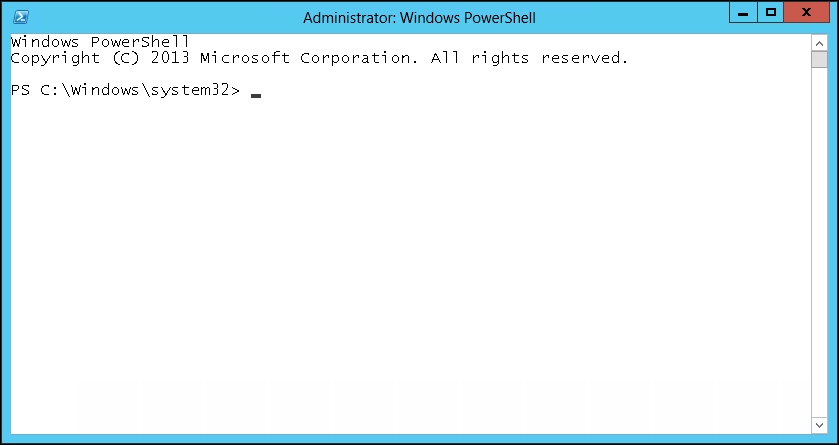 With PowerShell built on the Microsoft .NET Framework, .NET classes and methods can be used directly from the Command Prompt. For instance, while the Get-Date cmdlet will return a System.DateTime object, we can also accomplish the same task by entering [System.DateTime]::Now, as shown in the following screenshot. This is particularly useful when creating complex scripts that require using .NET classes and methods not already exposed as cmdlets. 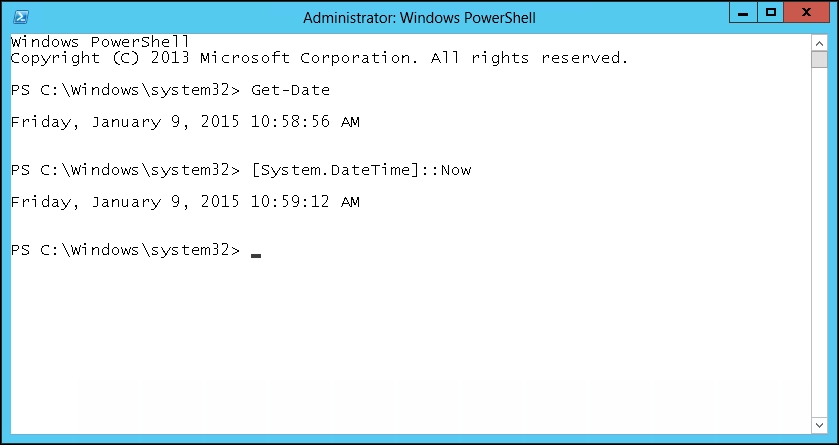 When accessing a static method or property of a .NET class, the full class name (with its namespace) is placed in square brackets ([ and ]). The method name or property name is then placed after two semicolons (::). For instance, accessing the Now property of System.DateTime is written as [System.DateTime]::Now, and accessing the IsLeapYear method of System.DateTime is written as [System.DateTime]::IsLeapYear(2020). It's not required to know how to interact directly with .NET classes and methods when using PowerShell. However, this is useful when functionality needs to be extended beyond what the available cmdlets can do. 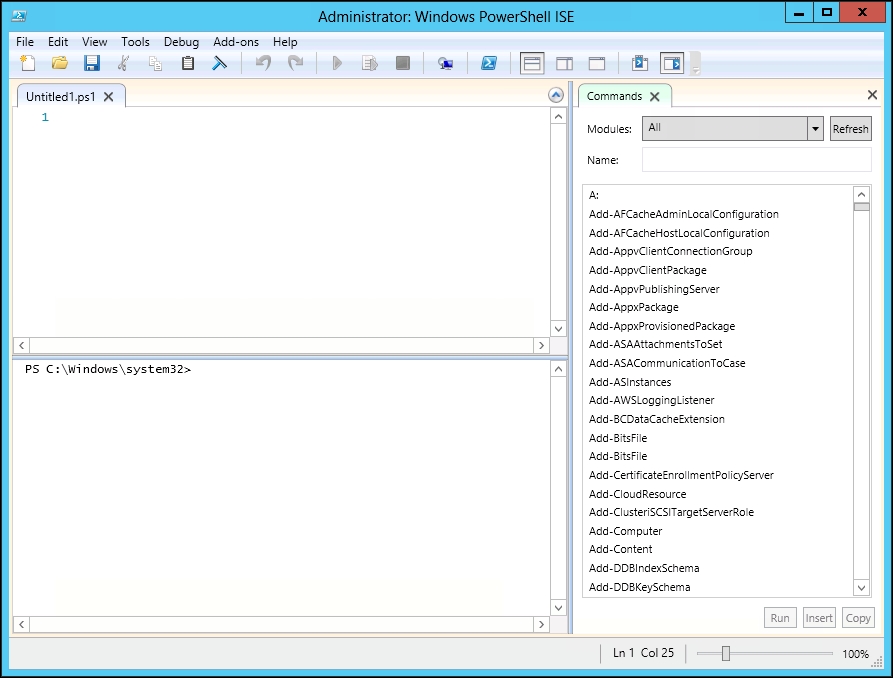 For more information about Windows PowerShell and Microsoft Azure, see the following resources:

Microsoft Azure is a subscription-based service, typically billed monthly. Microsoft Developer Network (MSDN) subscribers receive a free monthly credit for development purposes. In addition, Microsoft offers a free trial of Microsoft Azure for one month (up to $200 worth of services). To sign up for the free trial, visit http://azure.microsoft.com/en-us/pricing/free-trial.

For the purposes of the examples provided in this book, it does not matter what type of Microsoft Azure subscription is used. It simply must be active and you need global administrator rights to the subscription.

If someone else manages the Microsoft Azure subscription you are using, they can grant you the appropriate access by logging in to the Azure portal and navigating to the settings section of the portal.

If the computer is running Windows 7 or Windows Server 2008 R2, follow these steps to verify that PowerShell 3.0 or newer is installed:

The Microsoft Azure PowerShell project is open source. If desired, you can download the source code for the project and use it, rather than using the official version. The project is hosted on GitHub at https://github.com/Azure/azure-powershell. In addition, each version of Microsoft Azure PowerShell can be obtained from https://github.com/Azure/azure-sdk-tools/releases.

To install Microsoft Azure PowerShell, we will use the following steps:

Connecting to a Microsoft Azure subscription

The third option, using an uploaded management certificate, requires developer tools to be installed on the local machine. This is outside the scope of this book. If you would like more information on using a management certificate with Microsoft Azure, refer to http://msdn.microsoft.com/en-us/library/azure/gg551722.aspx.

Connecting to Azure subscription using Azure Active Directory credential is a fairly simple process. One drawback, however, is that you need to enter your credentials each time you start a new Azure PowerShell session, or every 12 hours if the session is kept open.

For many automated data center operations, manually entering user credentials for each PowerShell session (or every 12 hours) can be cumbersome. Alternatively, a publish settings file can be downloaded from Azure that allows PowerShell sessions to connect without entering user credentials. This is useful for highly automated processes that do not have human interaction (such as a scheduled backup job).

Whether we used the Azure Active Directory credentials method or Azure's publish settings file method, we are now connected to Microsoft Azure in our PowerShell session.

For more information on how to connect to Microsoft Azure with PowerShell and the cmdlets used in this section, refer to the following resources:

Now that we are connected to our Microsoft Azure subscription in PowerShell, we will create a simple Azure website to illustrate what we can do with Azure PowerShell.

Many of the cmdlets used to instantiate new services, such as a website, in Microsoft Azure include a -Location parameter. This parameter specifies in which Azure data center the new service will be instantiated. To get a list of the data centers available to your subscription, use the Get-AzureLocation | Format-List -Property Name command in PowerShell.

To create an Azure website, we will use the following steps:

For more information about the cmdlets used in this section, refer to the following resources:

In the next chapter, we will explore using PowerShell to manage Azure storage accounts, including file, blob, table, and queue storage. 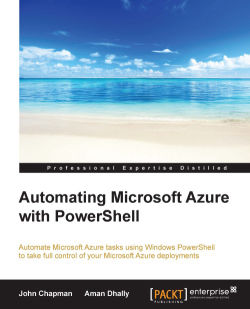