Artificial Vision and Language Processing for Robotics begins by discussing the theory behind robots. You'll compare different methods used to work with robots and explore computer vision, its algorithms, and limits. You'll then learn how to control the robot with natural language processing commands. You'll study Word2Vec and GloVe embedding techniques, non-numeric data, recurrent neural network (RNNs), and their advanced models. You'll create a simple Word2Vec model with Keras, as well as build a convolutional neural network (CNN) and improve it with data augmentation and transfer learning. You'll study the ROS and build a conversational agent to manage your robot. You'll also integrate your agent with the ROS and convert an image to text and text to speech. You'll learn to build an object recognition system using a video.

By the end of this book, you'll have the skills you need to build a functional application that can integrate with a ROS to extract useful information about your environment.

This chapter covers the brief history of robotics, classifies different types of robots and its hardware, and explains a way to find a robot's position using odometry.

The robotics sector represents the present and the future of humanity. Currently, there are robots in the industrial sector, in research laboratories, in universities, and even in our homes. The discipline of robotics is continually evolving, which is one of the reasons it is worth studying. Every robot needs someone to program it. Even those based on AI and self-learning need to be given initial goals. Malfunctioning robots need technicians and constant maintenance, and AI-based systems need constant data inputs and monitoring to be effective.

In this book, you will learn and practice lots of interesting techniques, focusing on artificial computer vision, natural language processing, and working with robots and simulators. This will give you a solid basis in some cutting-edge areas of robotics.

Robotics stemmed from the need to create intelligent machines to perform tasks that were difficult for humans. But it wasn't called â€œroboticsâ€ at first. The term â€œrobotâ€ was coined by a Czech writer, Karel ÄŒapek, in his work R.U.R. (Rossum's Universal Robots). It is derived from the Czech word robota, which means servitude and is related to forced labor.

ÄŒapek's work became known worldwide, and the term â€œrobotâ€ did too, so much so that this term was later used by the famous teacher and writer Isaac Asimov in his work; he termed robotics as the science that studies robots and their features.

Here you can see a timeline of the important events that have shaped the history of robotics: 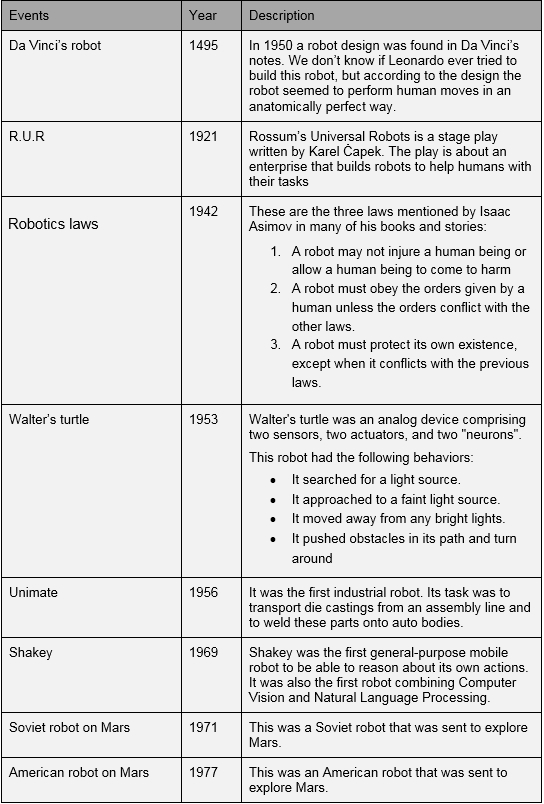 Figures 1.1 and 1.2 give a useful timeline of the beginnings and evolution of robotics.

AI refers to a set of algorithms developed with the objective of giving a machine the same capabilities as that of a human. It allows a robot to take its own decisions, interact with people, and recognize objects. This kind of intelligence is present not just in robots, but also in plenty of other applications and systems (even though people may be unaware of it).

There are many real-world products already using this kind of technology. Here's a list of some of them to show you the kind of interesting applications you can build:

Natural Language Processing (NLP) is a specialized field in AI that involves studying the different ways of enabling communication between humans and machines. It is the only technique that can make robots understand and reproduce human language.

If a user uses an application that is supposed to be capable of communicating, the user then expects the application to have a human-like conversation. If the humanoid robot uses badly formed phrases or does not give answers related to the questions, the user's experience wouldn't be good and the robot wouldn't be an attractive buy. This is why it is very important to understand and make good use of NLP in robotics.

Let's have a look at some real-world applications that use NLP:

Computer vision is a commonly used technique in robotics that can use different cameras to simulate the biomechanical three-dimensional movement of the human eye. It can be defined as a set of methods used to acquire, analyze, and process images and transform them into information that can be valuable for a computer. This means that the information gathered is transformed into numerical data, so that the computer can work with it. This will be covered in the chapters ahead.

Here's a list of some real-world examples that use computer vision:

When talking about AI and NLP, it is important to take a look at real-world robots, because these robots can give you a fair idea of the development and improvement of existing models. But first, let's talk about the different kinds of robots that we can find. Generally, they can be classified as industrial-based robots and service-based robots, which we will discuss in the following sections.

Industrial robots are used in manufacturing processes and don't usually have a human form. In general, they pretty much look like other machines. This is because they are built with the aim of executing a specific industrial task.

Service robots work, either partially or entirely, in an autonomous manner, and perform useful tasks for humans. These robots can also be further divided into two groups:

Here you can see some examples of real-world personal robots:

Hardware and Software of Robots

Just like any other computer system, a robot is composed of hardware and software. The kind of software and hardware the robot has will depend on its purpose and the developers designing it. However, there are a few types of hardware components that are more commonly used in several robots. We will be covering these in this chapter.

First of all, let's look at the three kinds of components that every robot has:

By using one of the internal sensors mentioned in the preceding section, we can calculate the position of a robot after a certain amount of displacement. This kind of calculation is called odometry and can be performed with the help of the encoders and the information they provide. When discussing this technique, it's important to keep in mind the main advantage and disadvantage:

Now, let's see how to perform this kind of calculation step by step. Supposing we have a robot that moves on two wheels, we would proceed as follows:

In this exercise, we are using the previous process to compute the position of a two-wheeled robot after it has moved for a certain amount of time. First, let's consider the following data:

For the initial position, the first and second numbers refer to the X and Y coordinates, and the last number refers to the rotation angle of the robot. This data is a bit relative, as you have to imagine where the axes begin.

How to Work with Robots

Like any other software development, the process of implementing applications and programs for robots can be done many different ways.

In the upcoming chapters, we will use frameworks and technologies that make it possible to abstract a specific problem and develop a solution that is easily adaptable to all kinds of robots and devices. In this book, we will be using Robot Operating System (ROS) for this purpose.

Another issue to consider before we start working with robots is the programming language to use. You surely know and have used some languages, but which one is the most appropriate? The real answer to this question is that there is no specific language; it always depends on the problem at hand. But during our book, and due to the kinds of activities that we will work on, we are going to use Python, which, as you may know, is an interpreted, high-level, general-purpose programming language that is used in AI and robotics.

By using Python, as with other languages, you can develop any functionality you want your robot to have. For example, you could give your robot the simple behavior of greeting when it detects a person. You could also program a more complex functionality, for example, to dance when it â€œhearsâ€ music.

Now we are going to go through some exercises and activities that will introduce you to Python for robotics, if you haven't used it before.

Exercise 2: Computing the Distance Traveled by a Wheel with Python

In this exercise, we are going to implement a simple Python function for computing the distance covered by a wheel using the same process that we performed in Exercise 1, Computing a Robot's Position. These are the steps to be followed:

The output in your notebook should look like this:

In this exercise, we use Python to compute the final position of a robot, given its initial position, its distance completed by the axis, and its rotation angle. You can do it by following this process:

The functions implemented in the previous exercises can help you to complete the activity. There are a few steps that you can use to proceed ahead with this activity.

Following these steps will help you to complete the exercises:

The solution for this activity can be found on page 248.

In addition, you have made use of odometry to compute a robot's position without external sensors. As you can see, it is not hard to compute a robot's position if the data required is available. Notice that although odometry is a good technique, in future chapters we will use other methods, which will allow us to work with sensors, and that may be more accurate in terms of results.

In the following chapter, we will look at computer vision and work on more practical topics. For example, you will be introduced to machine learning, decision trees, and artificial neural networks, with the goal of applying them to computer vision. You will use them all during the rest of the book, and you will surely get the chance to use them for personal or professional purposes. 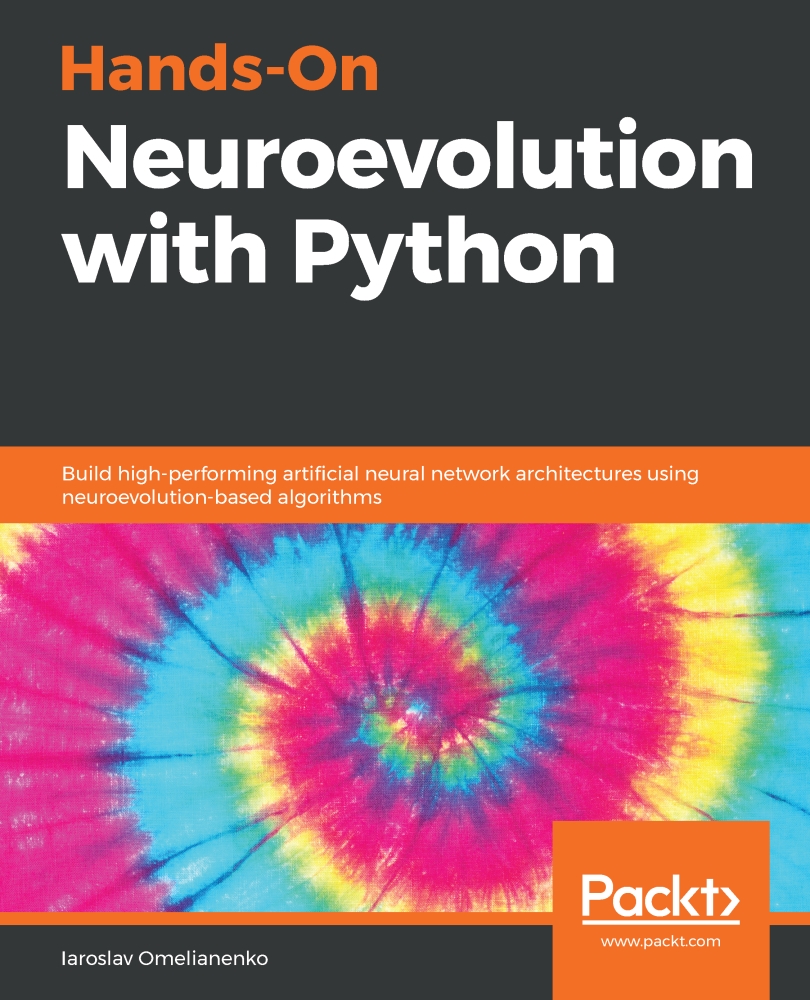 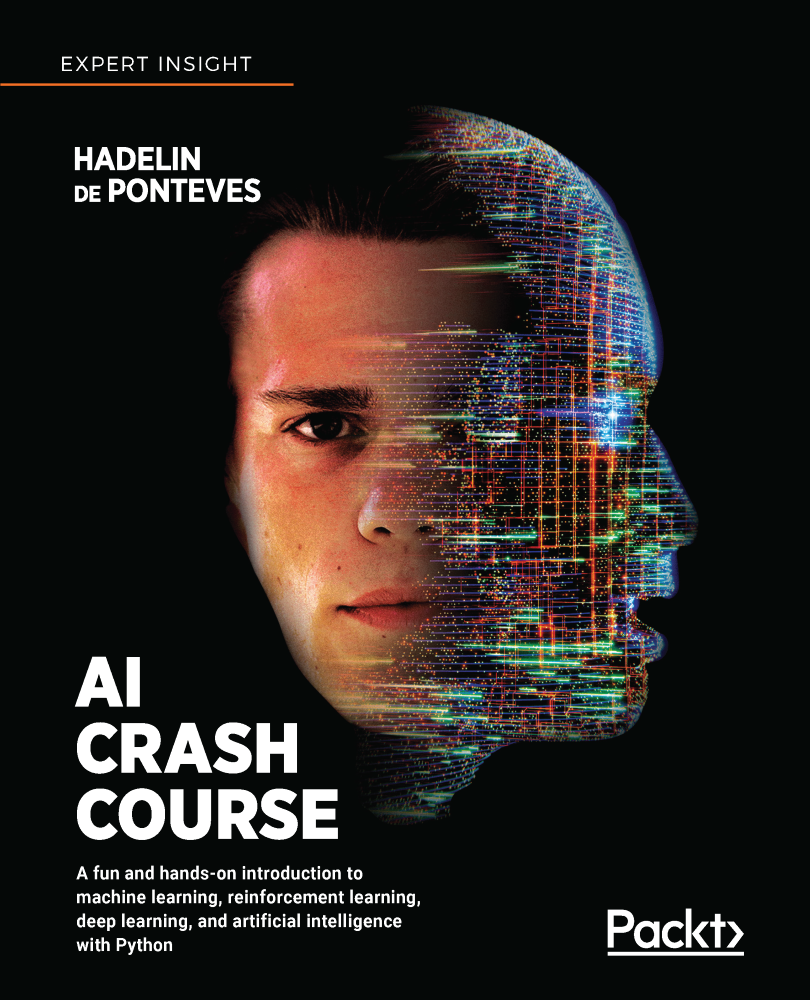 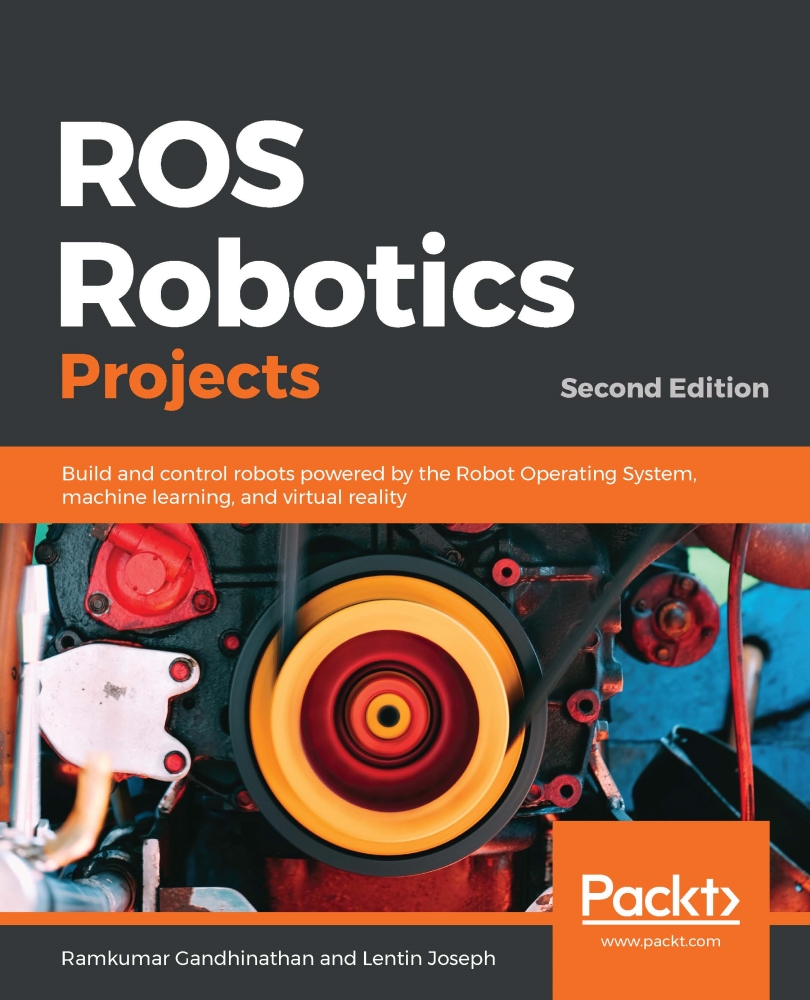 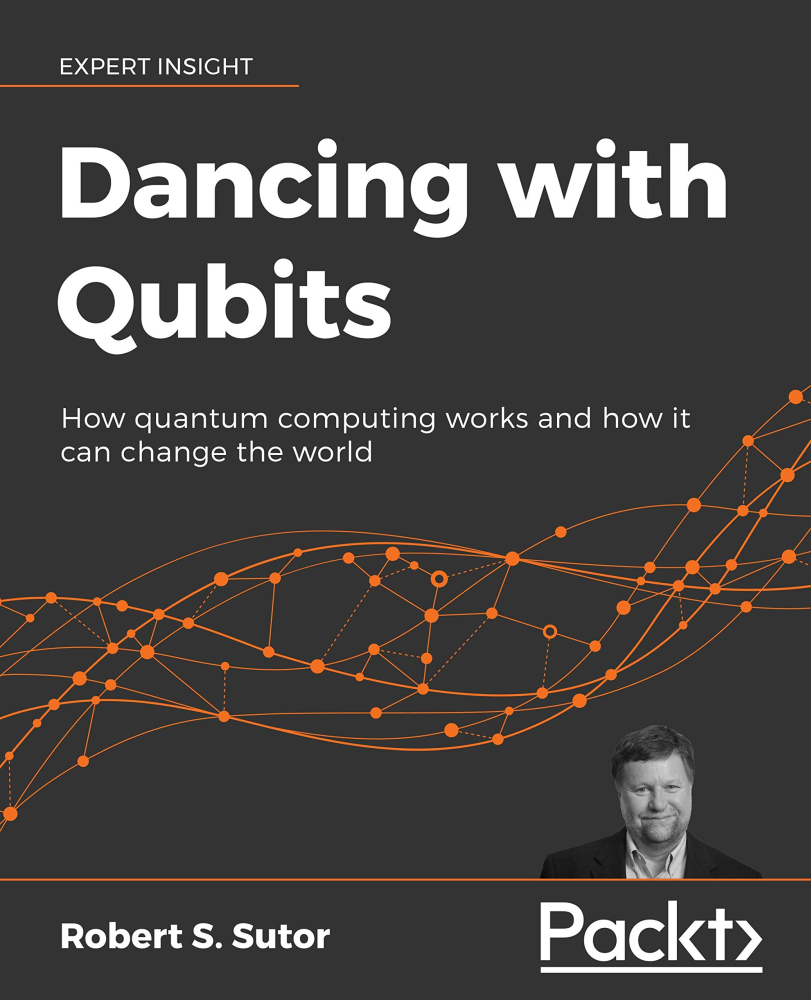 Explore the principles and practicalities of quantum computing 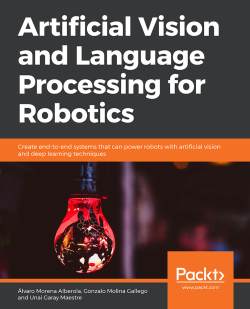