Arduino is an open-source prototyping platform based on easy-to-use hardware and software. Arduino has been used in thousands of different projects and applications by a wide range of programmers and artists, and their contributions have added up to an incredible amount of accessible knowledge that can be of great help to novices and experts alike.

Want to build exciting LED projects with Arduino? This book will be your companion to bring out the creative genius in you. To begin with, you will get introduced to the maker movement and the open source hardware development Arduino boards. You will then move on to develop a mood lamp and a remote-controlled TV backlight. As you progress through the book, you will develop an LED cube and will learn to use sound visualization to develop a sound-controlled LED Christmas tree. You will then move on to build a persistence of vision wand.

At the end of each chapter, you’ll see some common problems, their solutions, and some workarounds.


Chapter 1. Getting Started with Arduino and LEDs

Welcome to the exciting world of physical computing! Today, hobbyists and experts all over the world use Arduino to make interactive objects and to create cool prototypes. In this chapter, you will get introduced to different Arduino boards, followed by installation instructions for Arduino IDE. You will write a "Hello World" program using Arduino IDE and will learn about serial communication. By the end of this chapter, you will have a basic knowledge of Arduino and its IDE, which will be helpful in the remaining chapters of the book. In this chapter, we will cover the following:

Arduino was originally created for artists and designers as an easy and quick prototyping tool. Designers were able to create sophisticated designs and artworks even without having knowledge of electronics and programming. So it is understood that the first few steps of learning Arduino are very easy. In this section, you will get introduced to different Arduino boards and learn how to choose an Arduino board for your project and some information on the Arduino UNO board, which you will be using throughout this book.

Beginners often get confused when they discover Arduino projects. When looking for Arduino, they hear and read such terms as Uno, Zero, and Lilypad. The thing is, there is no such thing as "Arduino". In 2006, the Arduino team designed and developed a microcontroller board and released it under an open source license. Over the years, the team has improved upon the design and released several versions of the boards. These versions mostly had Italian names. There are numbers of boards that the team has designed over the past 10 years: 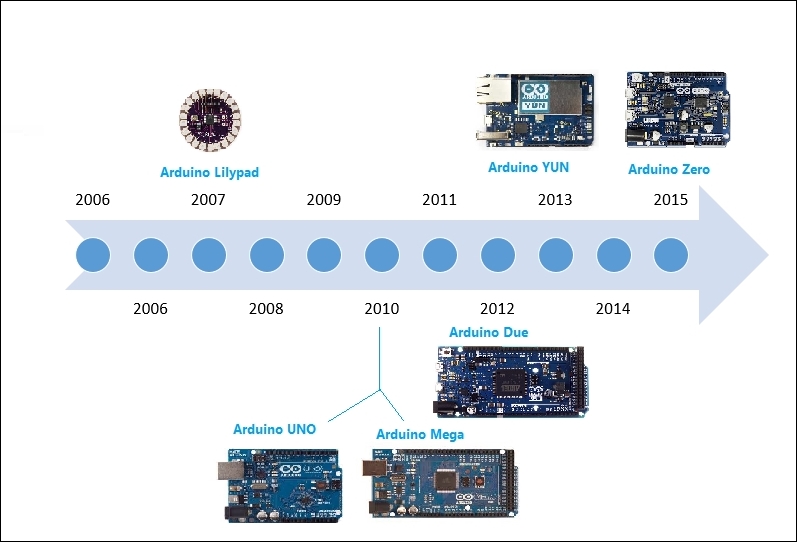 The Arduino team didn't just improve on design, they invented new designs for specific use cases in mind. For example, they developed Arduino Lilypad to embed a board into textiles. It can be used to build interactive T-shirts. The following table shows the capability of different Arduino boards. Arduino boards may differ in their appearance, but they have a lot in common. You can use the same tools and libraries to program:

As Arduino boards' design and schematics are open source, anyone can use and change the original board design and can create their own version of an Arduino-compatible board. Because of that, you can find countless Arduino clones on the web which can be programmed using the same tools and libraries used for original Arduino boards.

How to choose an Arduino board for your project

With so many options available, it becomes challenging for a person to decide which Arduino board to use for a project. The Arduino family is huge, and it is impossible to read about each and every board and decide upon which board to use for a particular project.

The following flowchart simplifies the process by providing a decision tree for widely-used Arduino boards and the most common use cases/applications: 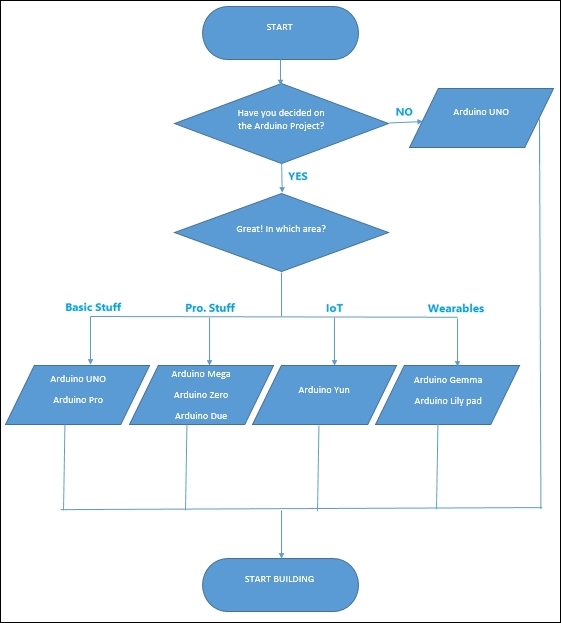 Arduino shields are modular circuit boards that can be plugged on top of the Arduino PCB, extending its capabilities. Want to connect your Arduino to the Internet? There is a shield for that. There are hundreds of shields available online, which makes Arduino more than just a development board.

Throughout this book, we will use the Arduino UNO board.

"UNO" means one in Italian, and it was chosen to mark the release of Arduino IDE v1.0. It is the first in a series of USB Arduino boards. As mentioned before, it is one of the most widely used boards in the Arduino Family: 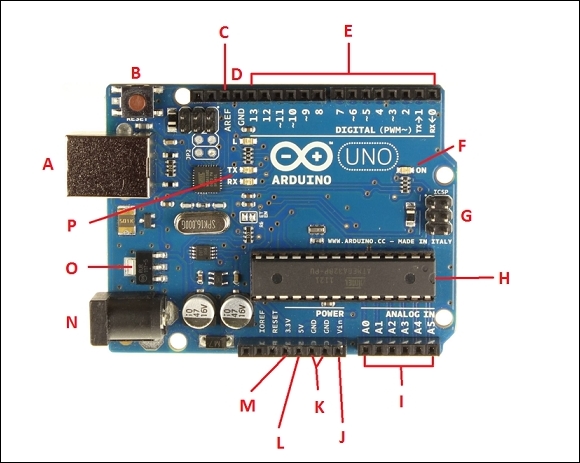 In this section you will get introduced to different components of the Arduino UNO board.

As, initially, Arduino was initially designed for artists and designers, the Arduino team has tried to develop Arduino software (IDE) as simply as possible without compromising on the power of the tool. Before you run your "Hello World" program, you need to install Arduino IDE on your computer.

If you have used IDEs such as Visual Studio, XCode, and Eclipse before, you'd better lower your expectations, because Arduino IDE is very simple. It mainly consists of an editor, a compiler, a loader, and a serial monitor. It has no advanced features such as a debugger or code completion: 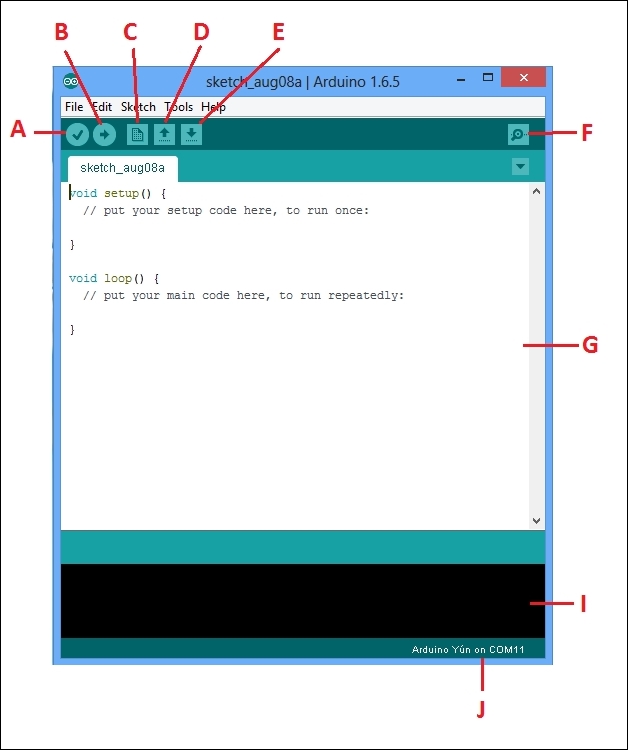 Let's look into each button separately:

After getting some understanding of Arduino UNO and IDE, there are a couple of things that you need to know before you dive into the world of Arduino.

As mentioned in the Arduino UNO section, there are two ways you can power up your Arduino UNO. One is by using a USB cable connected to your computer and the second one is by a 12 V external power supply. Please make sure that you don't use a power supply greater than 20 volts as you will overpower and thereby destroy your Arduino Board. The recommended voltage for most Arduino models is between 6 and 12 volts.

This is the last step before you write your "Hello World" program with your Arduino:

You must be aware of "Hello World" programs from computer science, where you write a piece of code which will display "Hello World". In electronics hardware board space, "Hello World" refers to blinking an LED by writing a simple program.

The resistor will block the flow of current in both directions. A diode is a two-terminal electronics component that has low resistance in one direction and high resistance in the other direction. Diodes are mostly made up of silicon. LEDs are the most commonly used diodes in any electronics circuit. LED stands for light emitting diode, so it emits light when sufficient voltage is provided across the LED anode and cathode.

The longer lead of the LED is the anode and the other end is the cathode. The color of the light depends on the semiconductor material used in the LED, as shown in the following diagram:

You will notice from the preceding code that there are two important functions in each program. The first one is setup, which runs only once when you power up the board or press the reset button. The second function is loop, which runs over and over forever.

In the setup function, you should write a code that needs to be executed once, like defining a variable, initializing a port as INPUT or OUTPUT. In the preceding code, digital pin 13 is defined as OUTPUT. In the loop function, the first line will put the HIGH voltage on pin 13, which will turn on the LED connected to pin 13.

Serial communication is used for communication between the Arduino board and a computer or other devices. All Arduino boards have at least one serial port which is also known as a UART. Serial data transfer is when we transfer data one bit at a time, one right after the other. Information is passed back and forth between the computer and Arduino by, essentially, setting a pin to high or low. Just like we used that technique to turn an LED on and off, we can also send data. One side sets the pin and the other reads it.

In this section, you will see two examples. In the first example, Arduino will send data to the computer using serial communication, while in the second example, by sending a command (serial) from the computer, you can control the functionality of the Arduino board.

In this example, the Arduino board will communicate with the computer using the serial port, which can be viewed on your machine using the Serial Monitor.

Write the following code to your Arduino editor:

Even if you have nothing in the setup or loop procedures, Arduino requires them to be there. That way it knows you really mean to do nothing, as opposed to forgetting to include them!

Serial.begin sets up Arduino with the transfer rate we want, in this case 9600 bits per second. Serial.println sends data from Arduino to the computer.

If you have trouble locating Serial Monitor, check the Understanding Arduino IDE section of this chapter. 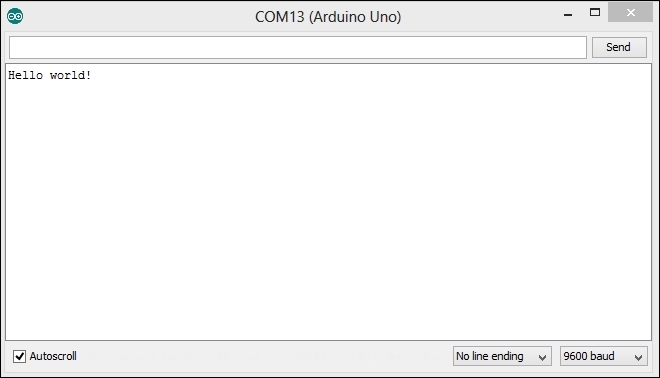 The inByte function will store the incoming serial byte. From the previous example, you should be familiar with the commands written in the setup function. In the loop function, first you need to know when a byte is available to be read. The Serial.available() function returns the number of bytes that are available to be read. If it is greater than 0, Serial.read() will read the byte and store it in an inByte variable. Let's say you want to turn on the LED when the letter 'o' is available. For that you will be using the if condition, and you will check whether the received byte is 'o' or not. If it is 'o', turn on the LED by setting pin 13 to HIGH. Arduino will also send an LED is ON message to the computer, which can be viewed in Serial Monitor: 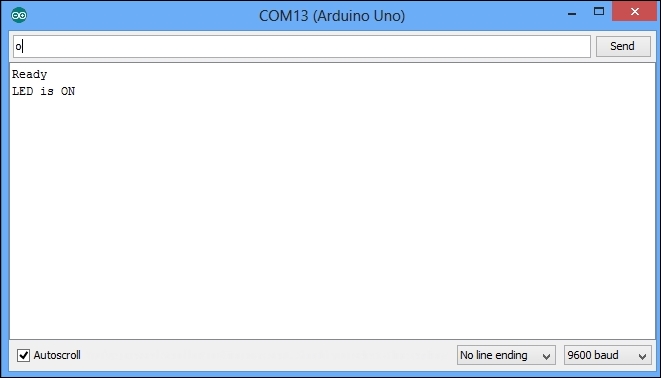 If it is any other character, then turn off the LED by setting pin 13 to LOW. Arduino will also send an LED is OFF message to the computer, which can be viewed in Serial Monitor: 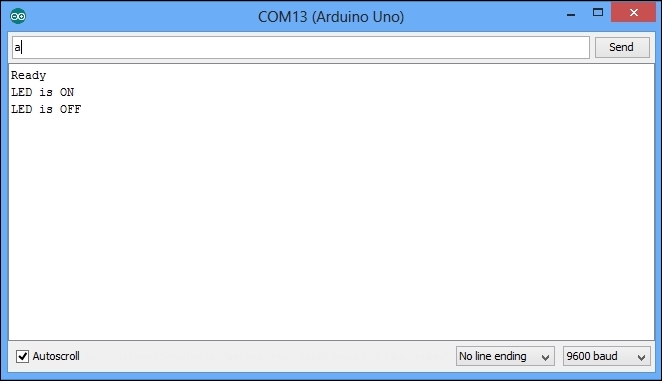 The world of LED

LED stands for light emitting diode, so it emits light when sufficient voltage is provided across the LED anode and cathode. Today's LEDs are available in many different types, shapes, and sizes – a direct result of the tremendous improvements in semiconductor technology over recent years. These advancements have led to better illumination, longer service life, and lower power consumption. They've also led to more difficult decision making, as there are so many types of LED to choose from.

LEDs can be categorized into miniature, high power, and application-specific LEDs:

In this chapter, an overview of different Arduino boards was covered, with a detailed explanation of an Arduino UNO board. Arduino IDE was explained, with installation instructions for Windows, Mac, and Linux machines. "Hello World" and a serial communication Arduino sketch were developed.

In the next chapter, we will develop an LED mood lamp and you will learn some artistic stuff apart from programming LEDs.

Read more Unlock this book with a 7 day free trial.
About the Authors
of interesting LED projects 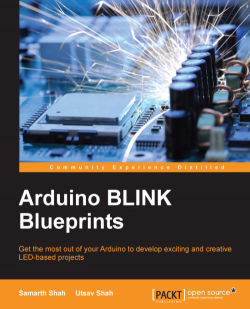