As more and more organizations are discovering the use of big data analytics, interest in platforms that provide storage, computation, and analytic capabilities is booming exponentially. This calls for data management. Hadoop caters to this need. Oozie fulfils this necessity for a scheduler for a Hadoop job by acting as a cron to better analyze data.

Apache Oozie Essentials starts off with the basics right from installing and configuring Oozie from source code on your Hadoop cluster to managing your complex clusters. You will learn how to create data ingestion and machine learning workflows.

This book is sprinkled with the examples and exercises to help you take your big data learning to the next level. You will discover how to write workflows to run your MapReduce, Pig ,Hive, and Sqoop scripts and schedule them to run at a specific time or for a specific business requirement using a coordinator. This book has engaging real-life exercises and examples to get you in the thick of things. Lastly, you’ll get a grip of how to embed Spark jobs, which can be used to run your machine learning models on Hadoop.

By the end of the book, you will have a good knowledge of Apache Oozie. You will be capable of using Oozie to handle large Hadoop workflows and even improve the availability of your Hadoop environment.

Oozie is a workflow scheduler system to run Apache Hadoop jobs. Oozie Workflow jobs are Directed Acyclic Graphs (DAGs) of actions. More information on DAG can be found at https://en.wikipedia.org/wiki/Directed_acyclic_graph. Actions tell what to do in the job. Oozie supports running jobs of various types such as Java, Map-reduce, Pig, Hive, Sqoop, Spark, and Distcp. The output of one action can be consumed by the next action to create a chain sequence.

Oozie has client-server architecture, in which we install the server for storing the jobs and using client we submit our jobs to the server.

In this chapter, we will learn how to install Oozie for learning purpose and in production. For learning purposes, we will build Oozie from the source code, and for production we will use Hadoop distribution by Hortonworks. Throughout the book, we will use Hortonworks single node virtual machine. If you are using a different Hadoop distribution, you should not worry at all. All distribution packages are the same for Oozie software, which is made by the Apache community (http://oozie.apache.org).

After reading this chapter, we will be able to:

In this section, we will learn how to configure Oozie inside Hortonworks Hadoop distribution using Ambari. We will configure the Oozie server to use a MySQL database instead of the default Derby database to store all job information.

We will use a virtual machine to learn how to configure Oozie in Hortonworks Hadoop distribution. Most of other distributions, such as Cloudera, Pivotal, and so on, have similar steps.

Let's start with the following steps:

This completes the first section in which we learned how to configure Oozie for Hortonworks Ambari distribution.

In this section, we will learn how to build and install Oozie from the source code. Since Hortonworks virtual machine had already Oozie installed, we did not need to do anything.

Just to learn how to install Oozie from tar ball in this section, we will use a Vagrant-based machine in which we will configure and install the Oozie server.

The summary of the steps we will perform is as follows:

Just as a heads-up, the vagrant machine needs lot of resources to build the code. So, if you do not have a powerful machine, you can build it directly on your host operating system rather than the virtual machine. I am working on a MacBook Pro, which has a 16 GB RAM. I gave 8 GB to the virtual machine to show how to install Oozie from source.

The following are the steps to create a test virtual machine:

Let's build Oozie from the source code. We will download the latest Oozie distribution and build it. All of these steps are present in the script build_oozie.sh placed at cat/vagrant/scripts/.

The contents of the script which we will run is as follows:

Summary of the build script

Let's run the command to start the Oozie build. It will take some time to download all the dependencies and build the source code:

If you already have a Maven repository on your host machine and want to to avoid downloading maven artifacts again, then look at the Maven settings file. I have configured (and commented) it to use my MacBook home maven as I already had all the artifacts there. You can uncomment that if you want to do something similar.

Codehaus no longer serves up Maven repositories, we need to configure Maven to download those dependencies from a different location. If you look at /etc/maven/settings.xml, which came with this machine, it has already been modified. You can see the details about it on the Codehaus website at http://www.codehaus.org/mechanics/maven/.

On a successful build, you should see something like the following screenshot: 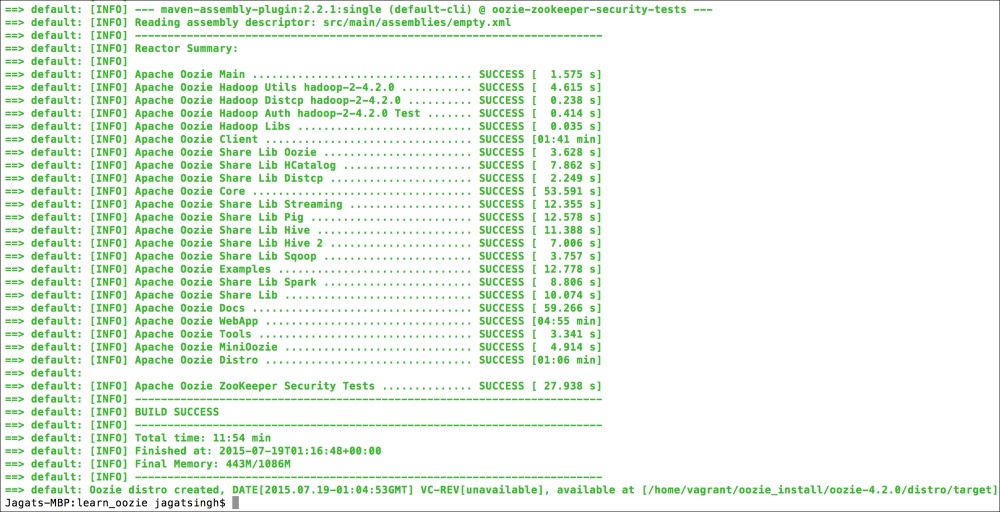 We will copy all of them in to one folder, libext, and then use the oozie-setup.sh command to build the WAR file.

Let's download the Hadoop jars from your cluster or by executing the following steps:

Now we should have Hadoop extracted to the folder ~/hadoop_install.

The preceding steps can be executed in one go using the following command:

Preparing to create a WAR file

To create the WAR file, we need to copy the Oozie distro built earlier and combine it with the jars for Hadoop, the MySQL JDBC driver, and the Ext-js library.

If you remember from the previous Ambari Oozie configuration, we used MySQL as our database and configured it using the ambari-setup command. We will take a similar approach for the MySQL JDBC driver jar, which we are providing by merging it with the Oozie WAR file.

Merge the Hadoop jars and the ext-js library using the following commands:

All of the preceding steps can be executed in one go using the following command:

After successful execution, go to /home/vagrant/oozie_install/oozie-4.2.0/libext and see that we now have jars placed in the folder.

Now we need to package the oozie-distro and jars that we copied in to the libext folder as a single packaged WAR file. This WAR file will be deployed in tomcat by going to the folder /home/vagrant/oozie_install/oozie-4.2.0 and executing the following command:

The command completes with a WAR file being created in the folder, as shown in the following screenshot:

Exercise: Execute bin/oozie-setup.sh help and read all the commands possible with the setup command.

If you remember, we configured Ambari Oozie to use MySQL database for Oozie. We will do the same for this instance of the Oozie server.

At the Mysql prompt, execute the following:

This will create the Oozie database, which will be used by the server.

Go to /home/vagrant/oozie_install/oozie-4.2.0/conf and open the oozie-site.xml file. In this file, all the Oozie settings are declared. All the Oozie configuration properties and their default values are defined in the oozie-default.xml file.

Oozie does not use the oozie-default.xml file found in the conf/ directory. It is there for reference purposes only.

Let's edit the oozie-site.xml and configure the database details. You can use the vi editor or copy the settings from the already created file using the following command:

If you want to edit it manually, then add the following code:

Exercise: Execute bin/ooziedb.sh help and read all the commands possible with the setup command.

We just need to tell Oozie about the shared libraries before starting the Oozie server. The Oozie sharelib .tar.gz file bundled with the distribution contains the necessary files to run Oozie Map-reduce streaming, Pig, Hive, Sqoop, Hcatalog, and Distcp actions.

The following command is used to start the server:

Exercise: Execute bin/oozied.sh help and read all the commands possible with the setup command.

The command, on successful completion, will not print any error message. We can check the status of Oozie server using the following command:

The output should be:

We can also check the Oozie web console by opening the URL http://localhost:11000/oozie.

We started this chapter with the configuration of Oozie inside the Hortonworks virtual machine. We learned how to configure the database for Oozie. Then we started building Oozie from the source code. We packaged the WAR file and also configured the MySQL database.

This completes the installation for the Oozie server.

In the next chapter, we will run our first Oozie job. We will learn how to run Hadoop filesystem commands in Oozie. We will also install Hue and create our Workflow using the editor provided by it. 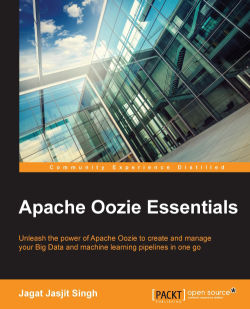