Message publishing is a mechanism of connecting heterogeneous applications together with messages that are routed between them, for example by using a message broker like Apache Kafka. Such solutions deal with real-time volumes of information and route it to multiple consumers without letting information producers know who the final consumers are.

Apache Kafka is a practical, hands-on guide providing you with a series of step-by-step practical implementations, which will help you take advantage of the real power behind Kafka, and give you a strong grounding for using it in your publisher-subscriber based architectures.

Apache Kafka takes you through a number of clear, practical implementations that will help you to take advantage of the power of Apache Kafka, quickly and painlessly. You will learn everything you need to know for setting up Kafka clusters. This book explains how Kafka basic blocks like producers, brokers, and consumers actually work and fit together. You will then explore additional settings and configuration changes to achieve ever more complex goals. Finally you will learn how Kafka works with other tools like Hadoop, Storm, and so on.

You will learn everything you need to know to work with Apache Kafka in the right format, as well as how to leverage its power of handling hundreds of megabytes of messages per second from multiple clients.

Welcome to the world of Apache Kafka.

Message publishing is a mechanism for connecting various applications with the help of messages that are routed between them, for example, by a message broker such as Kafka. Kafka is a solution to the real-time problems of any software solution, that is, to deal with real-time volumes of information and route it to multiple consumers quickly. Kafka provides seamless integration between information of producers and consumers without blocking the producers of the information, and without letting producers know who the final consumers are.

Kafka provides a real-time publish-subscribe solution, which overcomes the challenges of real-time data usage for consumption, for data volumes that may grow in order of magnitude, larger that the real data. Kafka also supports parallel data loading in the Hadoop systems. 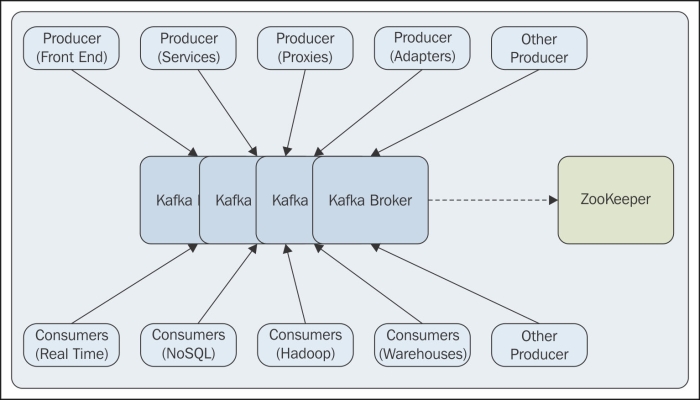 At the production side, there are different kinds of producers, such as the following:

At the consumption side, there are different kinds of consumers, such as the following:

A large amount of data is generated by companies having any form of web-based presence and activity. Data is one of the newer ingredients in these Internet-based systems and typically includes user-activity events corresponding to logins, page visits, clicks, social networking activities such as likes, sharing, and comments, and operational and system metrics. This data is typically handled by logging and traditional log aggregation solutions due to high throughput (millions of messages per second). These traditional solutions are the viable solutions for providing logging data to an offline analysis system such as Hadoop. However, the solutions are very limiting for building real-time processing systems.

According to the new trends in Internet applications, activity data has become a part of production data and is used to run analytics at real time. These analytics can be:

Apache Kafka aims to unify offline and online processing by providing a mechanism for parallel load in Hadoop systems as well as the ability to partition real-time consumption over a cluster of machines. Kafka can be compared with Scribe or Flume as it is useful for processing activity stream data; but from the architecture perspective, it is closer to traditional messaging systems such as ActiveMQ or RabitMQ.

Some of the companies that are using Apache Kafka in their respective use cases are as follows:

The source of the above information is https://cwiki.apache.org/confluence/display/KAFKA/Powered+By.

In this chapter, we have seen how companies are evolving the mechanism of collecting and processing application-generated data, and that of utilizing the real power of this data by running analytics over it.

In the next chapter we will look at the steps required to install Kafka. 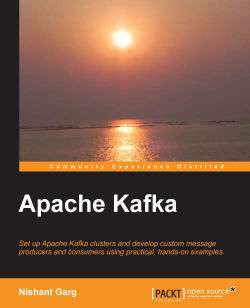