The book starts by introducing you to the cybersecurity landscape, focusing on cyber threats, malware, and more. You will learn how to collect leads to research antivirus and explore the two common bypass approaches used by the authors. Once you’ve covered the essentials of antivirus research and bypassing, you'll get hands-on with bypassing antivirus software using obfuscation, encryption, packing, PowerShell, and more. Toward the end, the book covers security improvement recommendations, useful for both antivirus vendors as well as for developers to help strengthen the security and malware detection capabilities of antivirus software.

Chapter 1: Introduction to the Security Landscape

This chapter provides an overview of our connected world. Specifically, it looks at how cybercriminals in the cyber landscape are becoming more sophisticated and dangerous. It looks at how they abuse the worldwide connectivity between people and technology. In recent years, the damage from cyberattacks has become increasingly destructive and the majority of the population actually thinks that antivirus software will protect them from all kinds of cyber threats. Of course, this is not true and there are always security aspects that need to be dealt with in order to improve antivirus software's overall security and detections.

In this chapter, we will explore the following topics:

In recent years, the internet has become our main way to transfer ideas and data. In fact, almost every home in the developed world has a computer and an internet connection.

The current reality is that most of our lives are digital. For example, we use the web for the following:

This means that anyone can find the most sensitive information, on any regular person, on their personal computer and smartphone.

This digital transformation, from the physical world to the virtual one, has also unfolded in the world of crime. Criminal acts in cyberspace are growing exponentially every year, whether through cyberattacks, malware attacks, or both.

Cybercriminals have several goals, such as the following:

Of course, when the main goal is money, there's a powerful motivation to steal and collect sellable information.

But despite the wide variety of products available, the simplest solution for PCs and other endpoints is antivirus software. This explains why it has become by far the most popular product in the field. Most PC vendors, for example, offer antivirus licenses bundled with a computer purchase, in the hope that the product will succeed in protecting users from cyberattacks and malware.

The research presented in this book is based on several types of malicious software that we wrote ourselves in order to demonstrate the variety of bypass techniques. Later in this book, we will explore details of the malware we created, along with other known and publicly available resources, to simplify the processes of the bypass techniques we used.

Now that we have understood why organizations and individuals use antivirus software, let's delve into the malware types, malicious actors, and more.

Malware is a portmanteau of malicious software. It refers to code, a payload, or a file whose purpose is to infiltrate and cause damage to the endpoint in a few different ways, such as the following:

Over the years, many companies have developed antivirus software that aims to combat all types of malware threats, which have multiplied over the years, with the potential for harm also growing every single day.

To understand how to bypass antivirus software, it's best to map out the different kinds of malware out there. This helps us get into the heads of the people writing antivirus signatures and other engines. It will help us recognize what they're looking for, and when they find a malicious file, to understand how they classify the malware file:

Now that we have understood malware and its varieties, we should take a look at the systems created to guard against these intrusions.

Antivirus software is the most basic type of protection system used to defend endpoints against malware. But besides antivirus software (which we will explore in the Antivirus – the basics section), there are many other types of products to protect a home and business user from these threats, both at the endpoint and network levels, including the following:

Now that we have understood which security solutions exist and their purpose in securing organizations and individuals, we will understand the fundamentals of antivirus software and the benefits of antivirus research bypass.

Antivirus software is intended to detect and prevent the spread of malicious files and processes within the operating system, thus protecting the endpoint from running them.

Over time, antivirus engines have improved and become smarter and more sophisticated; however, the foundation is identical in most products.

The majority of antivirus products today are based on just a few engines, with each engine having a different goal, as follows:

Of course, most of these engines have their own drawbacks. For example, the drawback of a static engine is that it is extremely basic, as its name implies. Its goal is to identify threats using static signatures, for instance, the YARA signature (YARA, Welcome to YARA's documentation, https://yara.readthedocs.io/en/stable/). These signatures are written from time to time and updated by antivirus security analysts on an almost daily basis.

During a scan, the static engine of the antivirus software conducts comparisons of existing files within the operating system to a database of signatures, and in this way can identify malware. However, in practice, it is impossible to identify all malware that exists using static signatures because any change to a particular malware file may bypass a particular static signature, and perhaps even completely bypass the static engine. 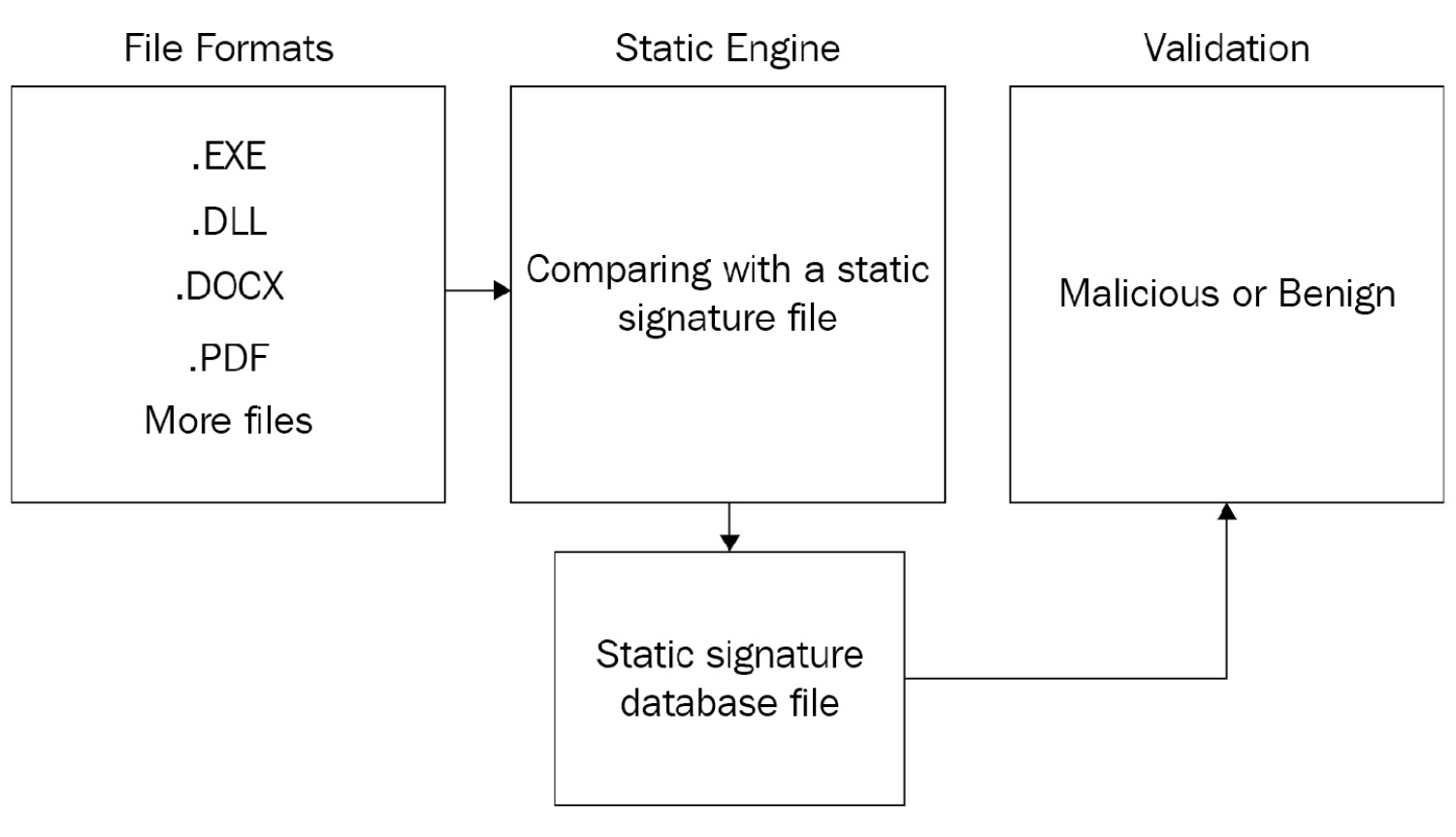 Using a dynamic engine, antivirus software becomes a little more advanced. This type of engine can detect malware dynamically (when the malware is executed in the system).

The dynamic engine is a little more advanced than the static engine, and its role is to check the file at runtime, through several methods.

Running malware inside a sandboxed environment will be effective against it especially when not signed and detected by the static engine of the antivirus software.

Using a heuristic engine, antivirus software becomes even more advanced. This type of engine determines a score for each file by conducting a statistical analysis that combines the static and dynamic engine methodologies.

Heuristic-based detection is a method, that based on pre-defined behavioral rules, can detect potentially malicious behavior of running processes. Examples of such rules can be the following:

The main drawback of the heuristic engine is that it can lead to a large number of false positive detections, and through several simple tests using trial and error, it is also possible to learn how the engine works and bypass it.

One of the major drawbacks of today's advanced antivirus software centers on their use of unpackers, tools used by antivirus engines to reveal malicious software payloads that have undergone "packing," or compression, to hide a malicious pattern and thus thwart signature-based detection.

The problem is that there are lots of packers today that antivirus software does not have unpackers for. In order to create automated unpacker software, security researchers from the antivirus software vendor must first perform manual unpacking – and only then can they create an automated process to unpack it and add it to one of their antivirus engines.

Now that we understand the basic engines that exist in almost every antivirus software, we can move on to recognize practical ways to bypass them to ultimately reach the point where we are running malware that lets us remotely control the endpoint even while the antivirus software is up and running.

Antivirus bypass in a nutshell

In order to prove the central claim of this book, that antivirus software cannot protect the user completely, we decided to conduct research. Our research is practically tested based on our written and compiled EXE files containing code that actually performs the techniques we will explain later on, along with payloads that perform the bypass. The goal of this research wasn't just to obtain a shell on the endpoint, but rather to actually control it, transmit remote commands, download files from the internet, steal information, initiate processes, and many more actions – all without any alert from the antivirus software.

The communication between the malware and the C2 server was done using the TCP protocol in two ways:

The difference between these two methods lies in how communication is transmitted from the malware to the attacker's C2 server. Using the method of the bind shell, the malware acts as a server on the victim endpoint, listening on a fixed port or even several ports. The attacker can interact with the endpoint using these listening port(s) at any time the malware is running.

The following diagram demonstrates the differences between reverse and bind shell: 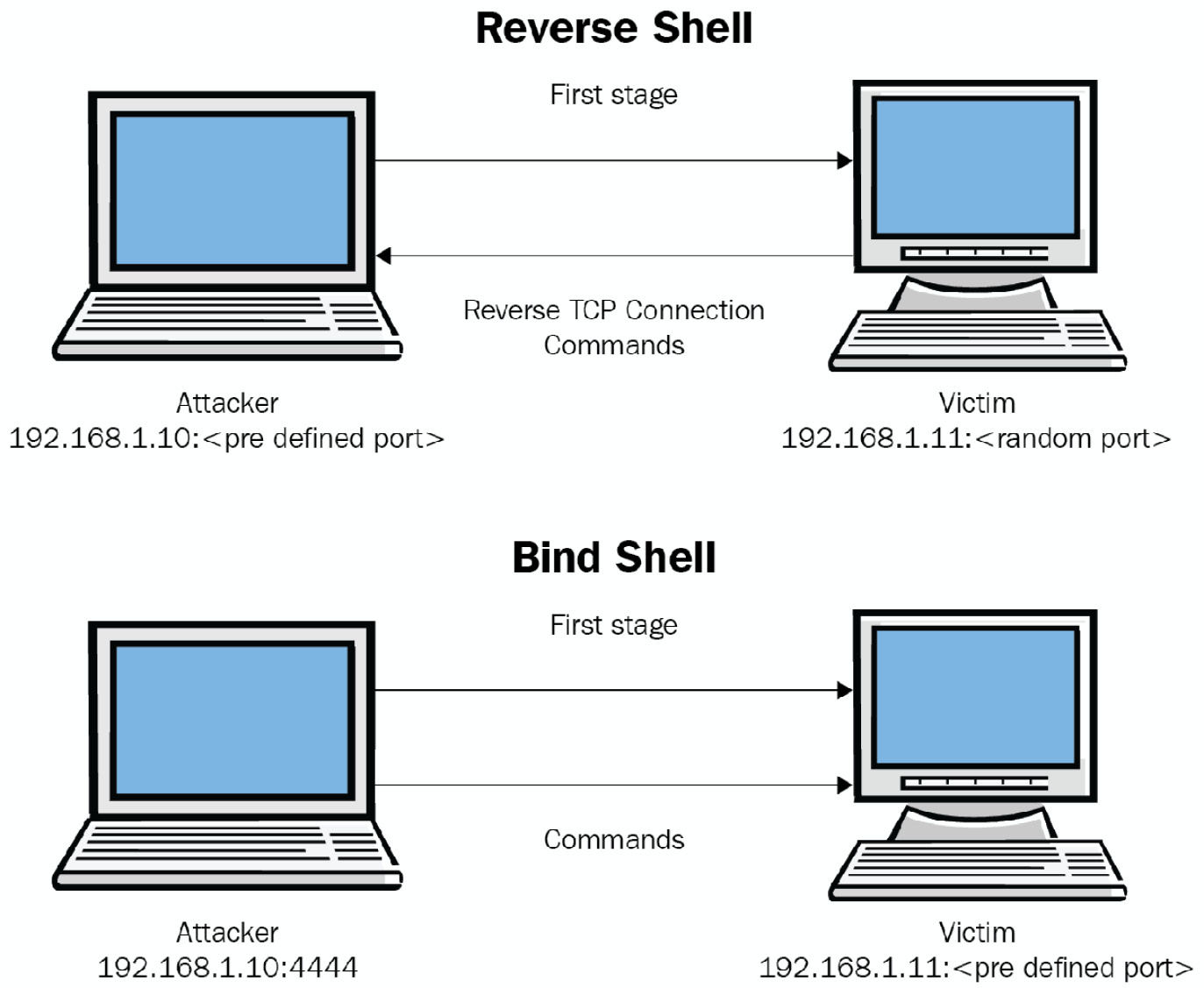 Most of the time, threat actors will prefer to base their malicious payload to interact with their C2 servers on the reverse shell technique. This is because it is relatively easy to implement; it will work behind Network Address Translation (NAT) and it will probably have the chance to fool antivirus software and firewall solutions.

In today's world, antivirus software is an integral part of security for endpoints including computers and servers, ranging from ordinary users to the largest organizations.

Most companies depend on antivirus software as a first or even last line of defense against cyber threats. Because of this, we decided to research antivirus software, find vulnerabilities in their engines, and most importantly, discover ways to bypass them to prove that they simply do not provide a completely bulletproof solution.

To conduct antivirus bypass research, it is crucial to understand the cybersecurity landscape. Every day, new risks and threats for home and business users emerge. It is important to get familiar with security solutions that provide better cybersecurity. Additionally, it's important, of course, to understand the basic solution, the antivirus, and to understand its inner workings and fundamentals to conduct better antivirus research. This helps both users and organizations evaluate whether their antivirus software provides the expected level of security.

In the next chapter, you will learn about the fundamentals and the usage of various tools that will help in conducting antivirus research lead gathering that will eventually influence the next levels of antivirus bypass research. 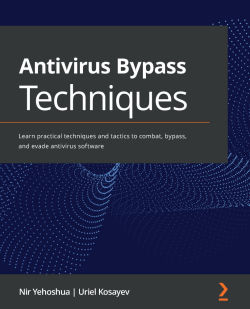