Ansible combines configuration management, orchestration, and parallel command execution into a single tool. Its batteries-included approach and built-in module library makes it easy to integrate it with cloud platforms, databases, and notification services without requiring additional plugins. Playbooks in Ansible define the policies your systems under management enforce. They facilitate effective configuration management rather than running ad hoc scripts to deploy complex applications.

This book will show you how to write a blueprint of your infrastructure encompassing multi-tier applications using Ansible's playbooks. Beginning with the basic concepts such as plays, tasks, handlers, inventory, and the YAML syntax that Ansible uses, you will see how to organize your code into a modular structure. Building on this, you will master techniques to create data-driven playbooks with variables, templates, logical constructs, and encrypted data. This book will also take you through advanced clustering concepts such as discovering topology information, managing multiple environments, and orchestration.

By the end of this book, you will be able to design solutions to your automation and orchestration problems using playbooks quickly and efficiently.

This book is a primer for anyone who has conceptual knowledge of Ansible and would like to get started writing Ansible playbooks to automate common infrastructure tasks, orchestrate application deployments, and/or manage configurations across multiple environments. This book follows an incremental approach, starting with the basics such as learning about the anatomy of a playbook and writing simple roles to create modular code. Once comfortable with the basics, you will be introduced to primitives such as adding dynamic data with variables and templates, and controlling execution flow with conditionals and iterators. This is then followed by more advanced topics such as node discovery, clustering, encrypting data, and managing environments. We conclude with the discussion on the orchestration features of Ansible. Let's begin our journey towards being an Ansible practitioner by learning about playbooks.

In this chapter, we will learn about:

Getting introduced to Ansible

Ansible is a simple, flexible, and extremely powerful tool that gives you the ability to automate common infrastructure tasks, run ad hoc commands, and deploy multitier applications spanning multiple machines. Even though you can use Ansible to launch commands on a number of hosts in parallel, the real power lies in managing those using playbooks.

As systems engineer, infrastructure that we typically need to automate contains complex multitier applications. Each of which represents a class of servers, for example, load balancers, web servers, database servers, caching applications, and middleware queues. Since many of these applications have to work in tandem to provide a service, there is topology involved as well. For example, a load balancer would connect to web servers, which in turn read/write to a database and connect to the caching server to fetch in-memory objects. Most of the time, when we launch such application stacks, we need to configure these components in a very specific order.

Here is an example of a very common three-tier web application running a load balancer, a web server, and a database backend: 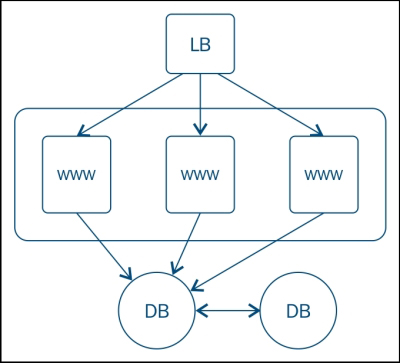 Ansible lets you translate this diagram into a blueprint, which defines your infrastructure policies. The format used to specify such policies is what playbooks are.

Example policies and the sequence in which those are to be applied is shown in the following steps:

The following is a sample playbook that translates the infrastructure blueprint into policies enforceable by Ansible: 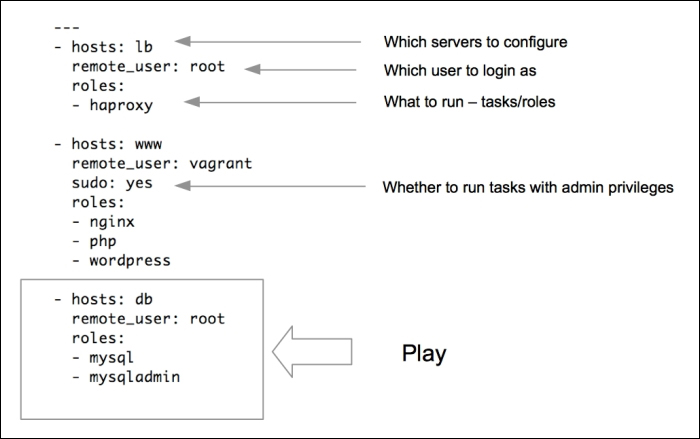 A playbook consists of one or more plays, which map groups of hosts to well-defined tasks. The preceding example contains three plays, each to configure one layer in the multitiered web application. Plays also define the order in which tasks are configured. This allows us to orchestrate multitier deployments. For example, configure the load balancers only after starting the web servers, or perform two-phase deployment where the first phase only adds this configurations and the second phase starts the services in the desired order.

As you may have already noticed, the playbook that we wrote previously resembles more of a text configuration than a code snippet. This is because the creators of Ansible chose to use a simple, human-readable, and familiar YAML format to blueprint the infrastructure. This adds to Ansible's appeal, as users of this tool need not learn any special programming language to get started with. Ansible code is self-explanatory and self-documenting in nature. A quick crash course on YAML should suffice to understand the basic syntax. Here is what you need to know about YAML to get started with your first playbook:

Equipped with the basic rules explained previously and assuming readers have done a quick dive into YAML fundamentals, we will now begin writing our first playbook. Our problem statement includes the following:

Now, we will create our first playbook and save it as simple_playbook.yml containing the following code:

Let's now look at each of these briefly.

Before we even start writing our playbook with Ansible, we need to define an inventory of all hosts that need to be configured, and make it available for Ansible to use. Later, we will start running plays against a selection of hosts from this inventory. If you have an existing inventory, such as cobbler, LDAP, a CMDB software, or wish to pull it from a cloud provider, such as ec2, it can be pulled from Ansible using the concept of a dynamic inventory.

For text-based local inventory, the default location is /etc/ansible/hosts. For our learning environment, however, we will create a custom inventory file customhosts in our working directory, the contents of which are shown as follows. You are free to create your own inventory file:

Now, when our playbook maps a play to the group, the www (hosts: www), hosts in that group will be configured. The all keywords will match to all hosts from the inventory.

The following are the guidelines to for creating inventory files:

After creating an inventory of the hosts, it's a good idea to validate connectivity using Ansible's ping module (for example, ansible -m ping all).

In the preceding playbook, the following lines decide which hosts to select to run a specific play:

Patterns can be any of the following or their combinations:

Plays map hosts to tasks. Tasks are a sequence of actions performed against a group of hosts that match the pattern specified in a play. Each play typically contains multiple tasks that are run serially on each machine that matches the pattern. For example, take a look at the following code snippet:

In the preceding example, we have two tasks. The first one is to create a group, and second is to create a user and add it to the group created earlier. If you notice, there is an additional line in the second task, which starts with name:. While writing tasks, it's good to provide a name with a human-readable description of what this task is going to achieve. If not, the action string will be printed instead.

Each action in a task list can be declared by specifying the following:

With newer versions of Ansible (0.8 onwards), writing an action keyword is now optional. We can directly provide the name of the module instead. So, both of these lines will have a similar action, that is,. installing a package with the apt module:

Ansible stands out from other configuration management tools, with its batteries-included included approach. These batteries are "modules." It's important to understand what modules are before we proceed.

Modules are the encapsulated procedures that are responsible for managing specific system components on specific platforms.

Modules abstract the actual implementation from users. They expose a declarative syntax that accepts a list of the parameters and states of the system components being managed. All this can be declared using the human-readable YAML syntax, using key-value pairs.

In terms of functionality, modules resemble providers for those of you who are familiar with Chef/Puppet software. Instead of writing procedures to create a user, with Ansible we declare which state our component should be in, that is, which user to create, its state, and its characteristics, such as UID, group, shell, and so on. The actual procedures are inherently known to Ansible via modules, and are executed in the background.

The Command and Shell modules are special ones. They neither take key-value pairs as parameters, nor are idempotent.

Ansible comes preinstalled with a library of modules, which ranges from the ones which manage basic system resources to more sophisticated ones that send notifications, perform cloud integrations, and so on. If you want to provision an ec2 instance, create a database on the remote PostgreSQL server, and get notifications on IRC, then Ansible has a module for it. Isn't this amazing?

No need to worry about finding an external plugin, or struggle to integrate with cloud providers, and so on. To find a list of modules available, you can refer to the Ansible documentation at http://docs.ansible.com/list_of_all_modules.html.

Ansible is extendible too. If you do not find a module that does the job for you, it's easy to write one, and it doesn't have to be in Python. A module can be written for Ansible in the language of your choice. This is discussed in detail at http://docs.ansible.com/developing_modules.html.

The modules and idempotence

Idempotence is an important characteristic of a module. It is something which can be applied on your system multiple times, and will return deterministic results. It has built-in intelligence. For instance, we have a task that uses the apt module to install Nginx and ensure that it's up to date. Here is what happens if you run it multiple times:

This allows executing the same task multiple times without resulting in the error state. Most of the Ansible modules are idempotent, except for the command and shell modules. Users will have to make these modules idempotent.

Ansible comes with the ansible-playbook command to launch a playbook with. Let's now run the plays we created:

Here is what happens when you run the preceding command: 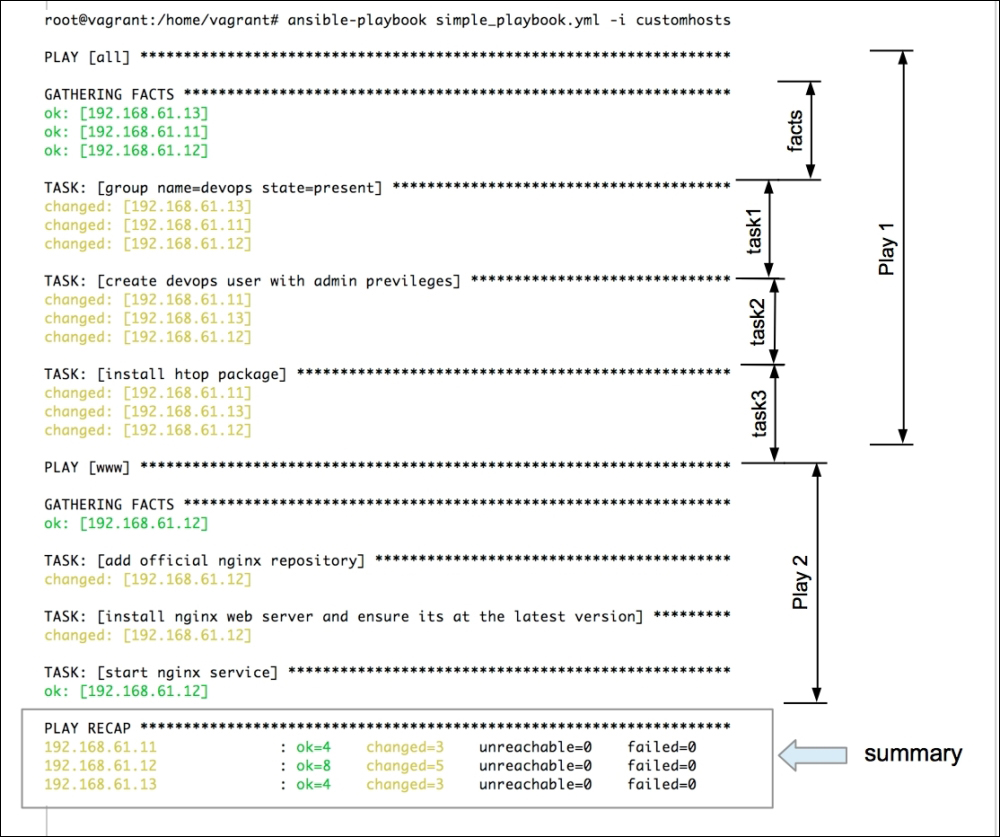 What if a host is unresponsive, or fails to run tasks? Ansible has built-in intelligence, which will identify such issues and take the failed host out of rotation. It will not affect the execution on other hosts.

Do you think you've understood the chapter well enough? Try answering the following questions to test your understanding:

In this chapter, you learned about what Ansible playbooks are, what components those are made up of, and how to blueprint your infrastructure with it. We also did a primer on YAMLâ€”the language used to create plays. You learned about how plays map tasks to hosts, how to create a host inventory, how to filter hosts with patterns, and how to use modules to perform actions on our systems. We then created a simple playbook as a proof of concept.

In the upcoming chapter, we will start refactoring our code to create reusable and modular chunks of code, and call them roles. 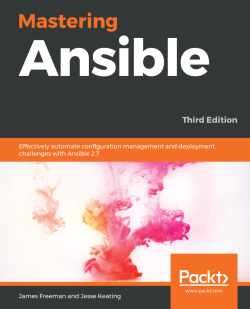 Design, develop, and solve real-world automation and orchestration problems by unlocking the automation capabilities of Ansible.

Design, develop, and solve real-world automation and orchestration problems by unlocking the automation capabilities of Ansible. 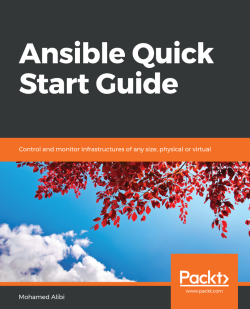 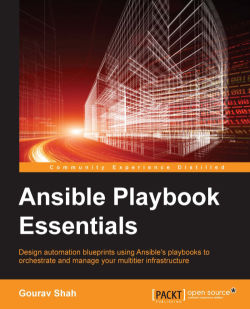