Android rolls out frequent updates to meet the demands of the dynamic mobile market and to enable its developer community to lead advancements in application development. This book focuses on the updated features of Android Studio (the fully integrated development environment launched by Google) to build reliable Android applications using Java.

The book starts by outlining the steps necessary to set up an Android development and testing environment. You’ll then learn how to create user interfaces with the help of Android Studio Layout Editor, XML files, and by writing the code in Java. The book introduces you to Android architecture components and advanced topics such as intents, touchscreen handling, gesture recognition, multi-window support integration, and biometric authentication, and lets you explore key features of Android Studio 4.0, including the layout editor, direct reply notifications, and dynamic delivery. You’ll also cover Android Jetpack in detail and create a sample app project using the ViewModel component. Finally, you’ll upload your app to the Google Play Console and handle the build process with Gradle.

By the end of this book, you’ll have gained the skills necessary to develop applications using Android Studio 4.0 and Java.

In 2018 Google introduced Android Jetpack to the developer community. Designed to make it quicker and easier to develop modern and reliable Android apps, Jetpack consists of a set of tools, libraries and architectural guidelines. The main elements of Android Jetpack consist of the Android Studio Integrated Development Environment (IDE), the Android Architecture Components and the Modern App Architecture Guidelines, all of which are covered in this latest edition of Android Studio Development Essentials.

Fully updated for Android Studio 4.0, the goal of this book is to teach the skills necessary to develop Android based applications using the Java programming language.

Beginning with the basics, this book provides an outline of the steps necessary to set up an Android development and testing environment. An overview of Android Studio is included covering areas such as tool windows, the code editor and the Layout Editor tool. An introduction to the architecture of Android is followed by an in-depth look at the design of Android applications and user interfaces using the Android Studio environment.

More advanced topics such as intents are also covered, as are touch screen handling, gesture recognition, and the recording and playback of audio. This edition of the book also covers printing, transitions, cloud-based file storage and foldable device support.

The concepts of material design are also covered in detail, including the use of floating action buttons, Snackbars, tabbed interfaces, card views, navigation drawers and collapsing toolbars.

Other key features of Android Studio 4.0 and Android are also covered in detail including the Layout Editor, the ConstraintLayout and ConstraintSet classes, MotionLayout Editor, view binding, constraint chains, barriers and direct reply notifications.

Assuming you already have some Java programming experience, are ready to download Android Studio and the Android SDK, have access to a Windows, Mac or Linux system and ideas for some apps to develop, you are ready to get started.

The source code and Android Studio project files for the examples contained in this book are available for download at:

The steps to load a project from the code samples into Android Studio are as follows:

2. In the project selection dialog, navigate to and select the folder containing the project to be imported and click on OK.

We want you to be satisfied with your purchase of this book. If you find any errors in the book, or have any comments, questions or concerns please contact us at feedback@ebookfrenzy.com.

While we make every effort to ensure the accuracy of the content of this book, it is inevitable that a book covering a subject area of this size and complexity may include some errors and oversights. Any known issues with the book will be outlined, together with solutions, at the following URL:

In the event that you find an error not listed in the errata, please let us know by emailing our technical support team at feedback@ebookfrenzy.com. They are there to help you and will work to resolve any problems you may encounter. 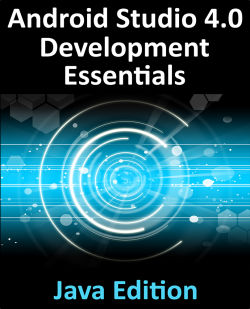