Building Android applications would usually mean that you spend all of your time working in Java. There are however times when this is not the most efficient or best method for the application being built. This is where Android NDK comes in. Android NDK allows the developer to write in Native C/C++, giving you the power to reuse code and libraries and also, in most cases, increase the speed and efficiency of your application.

The "Android Native Development Kit Cookbook" will help you understand the development, building, and debugging of your native Android applications. We will discover and learn JNI programming and essential NDK APIs such as OpenGL ES, and the native application API. We will then explore the process of porting existing libraries and software to NDK. By the end of this book you will be able to build your own apps in NDK apps.

"Android Native Development Kit Cookbook" begins with basic recipes that will help you in the building and debugging of native apps, and JNI programming. The recipes cover various topics of application development with Android NDK such as OpenGL programming and Multimedia programming. We will begin with a simple recipe, Hello NDK, before moving on to cover advanced topics with recipes on OpenGL ES that focus on 2D and 3D graphics, as well as recipes that discuss working with NDK and external APIs. If you are looking for ways to make your application available in Android and take measures to boost your application’s performance, then this Cookbook is for you.

Android NDK is a toolset that allows developers to implement a part of or an entire Android application in a native language, such as C, C++, and assembly. Before we start our journey to NDK, it is important to understand the advantages of NDK.

First of all, NDK may improve application performance. This is usually true for many processor-bound applications. Many multimedia applications and video games use native code for processor-intensive tasks.

The performance improvements can come from three sources. Firstly, the native code is compiled to a binary code and run directly on OS, while Java code is translated into Java byte-code and interpreted by Dalvik Virtual Machine (VM). At Android 2.2 or higher, a Just-In-Time (JIT) compiler is added to Dalvik VM to analyze and optimize the Java byte-code while the program is running (for example, JIT can compile a part of the byte-code to binary code before its execution). But in many cases, native code still runs faster than Java code.

Java code is run by Dalvik VM on Android. Dalvik VM is specially designed for systems with constrained hardware resources (memory space, processor speed, and so on).

The second source for performance improvements at NDK is that native code allows developers to make use of some processor features that are not accessible at Android SDK, such as NEON, a Single Instruction Multiple Data (SIMD) technology, allowing multiple data elements to be processed in parallel. One particular coding task example is the color conversion for a video frame or a photo. Suppose we are to convert a photo of 1920x1280 pixels from the RGB color space to the YCbCr color space. The naive approach is to apply a conversion formula to every pixel (that is, over two million pixels). With NEON, we can process multiple pixels at one time to reduce the processing time.

The third aspect is that we can optimize the critical code at an assembly level, which is a common practice in desktop software development.

The advantages of using native code do not come free. Calling JNI methods introduces extra work for the Dalvik VM and since the code is compiled, no runtime optimization can be applied. In fact, developing in NDK doesn't guarantee a performance improvement and can actually harm performance at times. Therefore, we only stated that it may improve the app's performance.

The second advantage of NDK is that it allows the porting of existing C and C++ code to Android. This does not only speed up the development significantly, but also allows us to share code between Android and non-Android projects.

Before we decide to use NDK for an Android app, it is good to know that NDK will not benefit most Android apps. It is not recommended to work in NDK simply because one prefers programming in C or C++ over Java. NDK cannot access lots of APIs available in the Android SDK directly, and developing in NDK will always introduce extra complexity into your application.

Setting up an Android NDK development environment in Windows

In this recipe, we will explore how to set up an Android NDK development environment in Windows.

Check the Windows edition and system type. An Android development environment can be set up on Windows XP 32-bit, Windows Vista 32- or 64-bit, and Windows 7 32- or 64-bit.

Android development requires Java JDK 6 or above to be installed. Follow these steps to install and configure Java JDK:

Cygwin is a Linux-like environment for Windows to run software available on Linux. Android NDK development requires Cygwin 1.7 or higher installed to execute some Linux programs; for example, the GNU make.

Since NDK r7, the Windows NDK comes with a new ndk-build.cmd build script, which uses NDK's prebuilt binaries for GNU make, awk, and other tools. Therefore Cygwin is not required for building NDK programs with ndk-build.cmd. However, it is recommended that you still install Cygwin, because ndk-build.cmd is an experimental feature and Cygwin is still needed by the debugging script ndk-gdb.

Eclipse is a powerful software Integrated Development Environment (IDE) with an extensible plugin system. It is the recommended IDE to develop Android apps. Go to http://www.eclipse.org/downloads/, and download the Eclipse Classic or Eclipse IDE for Java developers. Extract the compressed file and it will be ready for use. Note that Android development requires Eclipse 3.6.2 (Helios) or greater.

The Android developer website provides an Android Developer Tools bundle at http://developer.android.com/sdk/index.html. It includes the Eclipse IDE with the ADT plugin, and the Android SDK. We can download this bundle and skip the SDK installation described in steps 1 to 10 of the following How to do it... section.

Android NDK does not require installation. We downloaded NDK, and configured the path to make it more convenient to use.

Cygwin is not required for Android SDK development, but is essential for NDK development because NDK uses some Linux tools that depend on Cygwin.

NDK plugin in ADT: NDK plugin for Eclipse is available in Android Development Tools (ADT), which allows us to build and debug Android NDK applications easily.

The NDK plugin is only available for ADT 20.0.0 or later, which was released on June 2012. You may want to update your Eclipse ADT in order to use the NDK plugin.

Setting up an Android NDK development environment in Ubuntu Linux

This recipe depicts how to set up an Android NDK development environment in Ubuntu Linux.

Check your Ubuntu version and make sure it is version 8.04 or later.

GNU C Library (glibc) 2.7 or above is required. It is usually installed with Linux by default. Two simple methods can check the version of glibc:

We will use Eclipse as our IDE. Please refer to the Setting up an Android NDK development environment in Windows recipe for instructions.

The following steps indicate the procedure of setting up an Android NDK development environment on Ubuntu Linux:

We first set up Android SDK and then Android NDK. Ensure that the path is set properly, so that the tools can be accessed without referring to the SDK and NDK directories.

The .bashrc file is a startup file read by the bash shell when you start a new terminal. The export commands appended the Android SDK and NDK directory locations to the environment variable PATH. Therefore, every time a new bash shell starts, PATH is set properly for SDK and NDK tools.

The following are a few more tips on setting up an NDK development environment:

Setting up an Android NDK development environment in Mac OS

This recipe describes how to set up an Android NDK development environment in Mac OS.

Android development requires Mac OS X 10.5.8 or higher, and it works on the x86 architecture only. Ensure that your machine meets these requirements before getting started.

Register an Apple developer account, then go to https://developer.apple.com/xcode/ to download Xcode, which contains a lot of developer tools, including the make utility required for Android NDK development. After the download is complete, run the installation package and make sure that the UNIX Development option is selected for installation.

As usual, Java JDK 6 or above is required. Mac OS X usually ships with a full JDK. We can verify that your machine has the required version by using the following command:

Setting up an Android NDK development environment on Mac OS X is similar to setting it up on Ubuntu Linux. The following steps explain how we can do this:

The steps to set up an Android NDK development environment on Mac OS X are similar to Ubuntu Linux, since both of them are Unix-like operating systems. We first installed Android SDK, then Android NDK.

When there is a new release of NDK, we may want to update NDK in order to take advantage of the new features or bug fixes with the new release. This recipe talks about how to update Android NDK in Windows, Ubuntu Linux, and Mac OS.

Please read the previous recipes in this chapter, depending on the platform of your choice.

In Windows, follow these instructions to update Android NDK:

In Ubuntu Linux, follow these instructions to update Android NDK:

In Mac OS, the steps are almost identical to Ubuntu Linux, except that we need to append the path to ~/.profile instead of ~/.bashrc.

NDK installation is completed by simply downloading and extracting the NDK file, and configuring the path properly. Therefore, updating NDK is as simple as updating the configured path to the new NDK folder.

Sometimes, updating NDK requires updating SDK first. Since this book focuses on Android NDK, explaining how to update SDK is beyond the scope of this book. You can refer to the Android developer website at http://developer.android.com/sdk/index.html, for details on how to do it.

At times, we may feel the need to use an old version of NDK to build certain applications because of compatibility issues. Therefore, it may be useful to keep multiple versions of Android NDK and switch between them by changing the path or simply using the full path to refer to a specific version of NDK.

With the environment set up, let's start writing the code in NDK. This recipe walks through a Hello NDK program.

The NDK development environment needs to be set up properly before starting to write the Hello NDK program. Please refer to previous recipes in this chapter, depending upon the platform of your choice.

Follow these steps to write, compile, and run the Hello NDK program:

This recipe demonstrated how to write a Hello NDK program on Android.

The name of a native method is lengthy and writing it manually is error-prone. Fortunately, the javah program from JDK can help us generate the header file, which includes the method name. The following steps should be followed to use javah: 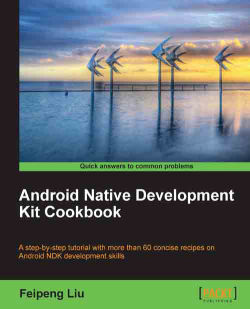