Android gaming is a hot topic these days, but one of the few areas of technology that does not have an abundance of clear and useful documentation online. However, there is an ever-increasing demand for Android games.

This book will help you get up to speed with the essentials of game development with Android. The book begins by teaching you the setup of a game development environment on a fundamental level. Moving on, the book deals with concepts such as building a home screen UI, implementing game objects, and painting the scene at a fixed resolution. Gradually, it builds up to the implementation of a flexible and advanced game engine that uses OpenGL ES 2 for fast, smooth frame rates. This is achieved by starting with a simple game and gradually increasing the complexity of the three complete games built step by step. By the end of the book, you will have successfully built three exciting games over the course of three engrossing and insightful projects.

The terminology used by old arcade and pinball machines "1 UP" was a kind of notice to the players that they were playing (up) now. It was also used to indicate earning an extra life. Are you ready to build three great games?

We will build three cool games together. Every line of code for these three games is shown in this book; you will never have to refer to the code files to see what is going on. Also, the entire file set required to build all three games is included in the download bundle that can be obtained from the books page on the Packt website.

All the code, Android manifest files, and the graphical and audio assets are included in the download as well. The three cool games are progressively more challenging to implement.

The first project uses a simple but functional game engine that clearly demonstrates the essentials of a main game loop. The game will be fully working with the home screen, high scores, sound, and animation. But by the end of the project, as we add features and try to balance the game play, we will soon see that we need more flexibility in order to add features.

In the second project, a hard retro platformer, we will see how we can use a simple and flexible design to build a relatively fast and very flexible game engine, which is extendable and reusable. This flexibility will allow us to make quite a complex and well-featured game. This game will have multiple levels, different environments, and more. This in turn will highlight the need for being able to draw graphics more quickly. That leads us on to the third project.

In the third project, we will build an Asteroids-like game called Asteroids simulator. Although the game won't have as many features as the previous project, it will feature the super-smooth drawing of hundreds of animated game objects running at over 60 frames per second. We will achieve this by learning about and using the Open Graphics Library for Embedded Systems (OpenGL ES 2).

By the end of this book, you will have a whole repertoire of design ideas, techniques, and code templates that you can use in your future games. By seeing the strengths and weaknesses of the different ways of making games on Android, you will be able to successfully design and build games in the most appropriate way for your next big game.

A closer look at the games

Here is a quick glimpse at the three projects.

Fly Flappy Bird-style with one finger to reach your home planet, while avoiding multiple enemies. Features include:

This is a genuinely tough-to-beat retro style platform game. We have to guide Bob from the underground fire caves through the city, forest, and finally to the mountains. It has four challenging levels. Features include:

This is a classic shooter with retro vector-graphics style visuals. It involves clearing waves of smoothly animated spinning asteroids with a rapid fire gun. Features include:

Setting up your development environment

All the code in this book and the download bundle will work in your favorite Android IDE. However, I found the latest version of Android Studio exceptionally friendly to use and the code was written and tested in it as well.

If you don't currently use Android Studio, I encourage you to give it a try. Here is a quick overview of how to get up and running quickly. This guide includes steps to install the Java JDK in case you are completely new to Android development.

If you already have your preferred development environment ready to go then jump straight to Chapter 2, Tappy Defender – First Step.

The first thing we need to do is prepare your PC to develop for Android using Java. Fortunately, this is made quite simple for us.

If you are learning on Mac or Linux everything in this book will still work. The next two tutorials have Windows-specific instructions and screenshots. However, it shouldn't be too difficult to vary the steps slightly to suit Mac or Linux.

All we need to do is:

The first thing we need to do is get the latest version of the JDK. To complete this guide, perform the following instructions:

The JDK is now installed on our PC.

Without delay, let's get Android Studio installed, and then we can begin our first game project. Visit:

That was the last piece of software we needed. We will begin to use Android Studio straight away in the next chapter.

This chapter was deliberately kept as short as possible, so we can get on with building some games. We will do this now.

Read more Unlock this book with a 7 day free trial.
About the Author
Easy to follow; with code downloads available

4
22 April 2019 golfcalcs
Easy Easy Easy.....Love the way ti order with such ease and no complications. 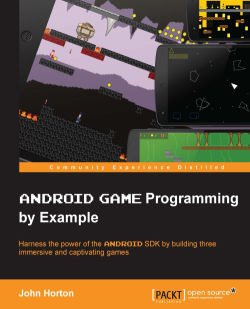