Building an Express application that is reliable, robust, maintainable, testable, and can scale beyond a single server requires a bit of extra thought and effort. Express applications that need to survive in a production environment will need to reach out to the Node ecosystem and beyond, for support.

You will start by laying the foundations of your software development journey, as you drive-out features under test. You will move on quickly to expand on your existing knowledge, learning how to create a web API and a consuming client. You will then introduce a real-time element in your application.

Advanced Express Web Application Development will guide you through the process of building a nontrivial, single-page application using Express.

Express is a fast, unopinionated, minimalist, and flexible web application framework for Node.js written by TJ. Holowaychuk. It was inspired by Sinatra , a web framework for Ruby. Express provides a robust set of features for building single, multi-page, and hybrid web applications and has quickly become the most popular web development framework for node. Express is built on top of an extensible HTTP server framework—also developed by TJ. Holowaychuk—called Connect. Connect provides a set of high performance plugins known as middleware. Connect includes over 20 commonly used middleware, including a logger, session support, cookie parser, and more.

This book will guide you through the process of building a single-page application called Vision; a dashboard for software development projects that integrates with GitHub to give you a single-screen snapshot of your software development projects issues and commits. This project will allow us to demonstrate the advanced features Express has to offer and will give us the opportunity to explore the kind of issues encountered in a commercial development and production deployment of a node/Express application.

We will now begin the process of building a Vision application. We will start from scratch with a test-first approach. Along the way, we will explore some best practices and offer tips for when developing web applications with node and Express.

The Vision application will include the following features:

The following screenshot is of our Vision application; it contains a list of projects, repositories, commits, and issues. The upper-right corner has a login link that we will use for authentication: 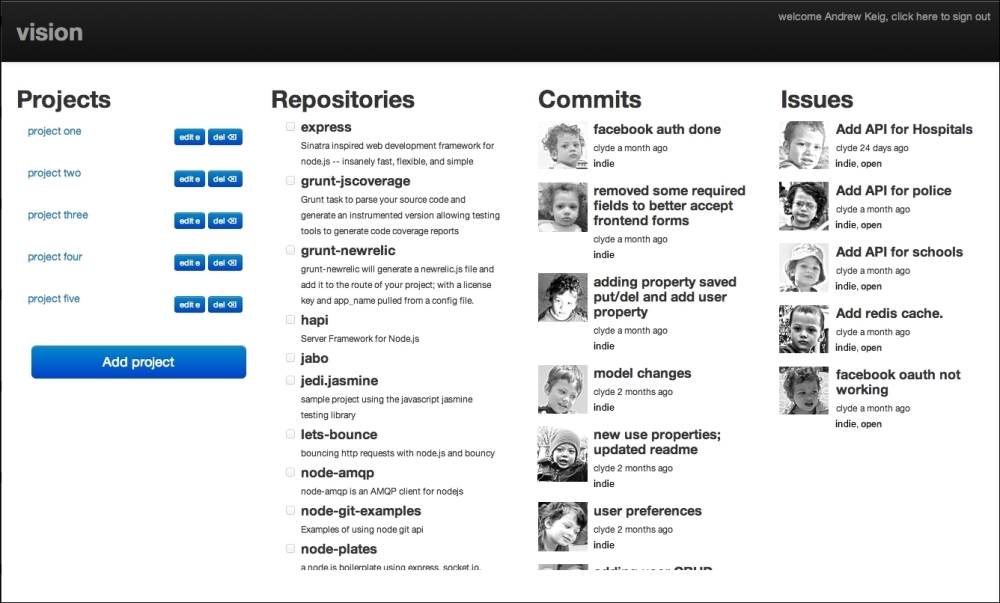 If you do not have node installed, visit: http://nodejs.org/download/.

There is also an installation guide on the node GitHub repository wiki if you prefer not to or cannot use an installer: https://github.com/joyent/node/wiki/Installation.

Download the source code for this book here: https://github.com/AndrewKeig/advanced-express-application-development.

If you have downloaded the source code, install its dependencies by running this command:

Let's start by creating a root project folder called vision and add a package.json file to it: ./package.json:

Testing Express with Mocha and SuperTest

Now that we have Express installed and our package.json file in place, we can begin to drive out our application with a test-first approach. We will now install two modules to assist us: mocha and supertest.

Mocha is a testing framework for node; it's flexible, has good async support, and allows you to run tests in both a TDD and BDD style. It can also be used on both the client and server side. Let's install Mocha with the following command:

SuperTest is an integration testing framework that will allow us to easily write tests against a RESTful HTTP server. Let's install SuperTest:

Let's add a test to ./test/heartbeat.js for our Heartbeat feature. This resource will get a status from the route /heartbeat and return a 200 Ok status code. Let's write our first integration test using Mocha and SuperTest. First off, create a folder named /test inside your vision folder.

Our test describes heartbeat; it expects the response to have a JSON content type and a status code equal to 200 Ok.

Let's implement the Heartbeat feature; we start by creating a simple Express server, ./lib/express/index.js. We include the express and http modules and create an Express application. We then add an application setting via app.set called port and set it to 3000. We define a /heartbeat route via app.get with which we pass a request handler, function, that takes two parameters: req (request) and res (response). We use the response object to return a JSON response. We create an HTTP server with http.createServer by passing our Express application to it; we listen on port 3000 as defined in our application setting called port. We then export the application with module.exports; exporting the application allows us to test it.

We now create ./app.js in the root of our project and export the express module:

To run our test, execute the following command:

You should then receive the response:

If successful, try running the application by executing this command:

With the app running, run the following curl command in a new terminal and you can see our heartbeat JSON response return a 200 Ok status code:

One of the great things about working with a dynamic language and one of the things that has drawn me to node is the ability to easily do Test-Driven Development and continuous testing. Simply run Mocha with the -w watch switch and Mocha will respond when changes to our codebase are made, and will automatically rerun the tests:

Code coverage with Mocha and JSCoverage

Mocha is able to generate a code coverage report with a little help from JSCoverage . Install JSCoverage for your environment from http://siliconforks.com/jscoverage/. JSCoverage will parse source code and generate an instrumented version; this enables mocha to execute this generated code and create a report. We will need to update ./app.js.

Depending on your version of JSCoverage, you may need to add the –no-highlight switch:

The following command will generate the coverage report, as shown in the following screenshot: 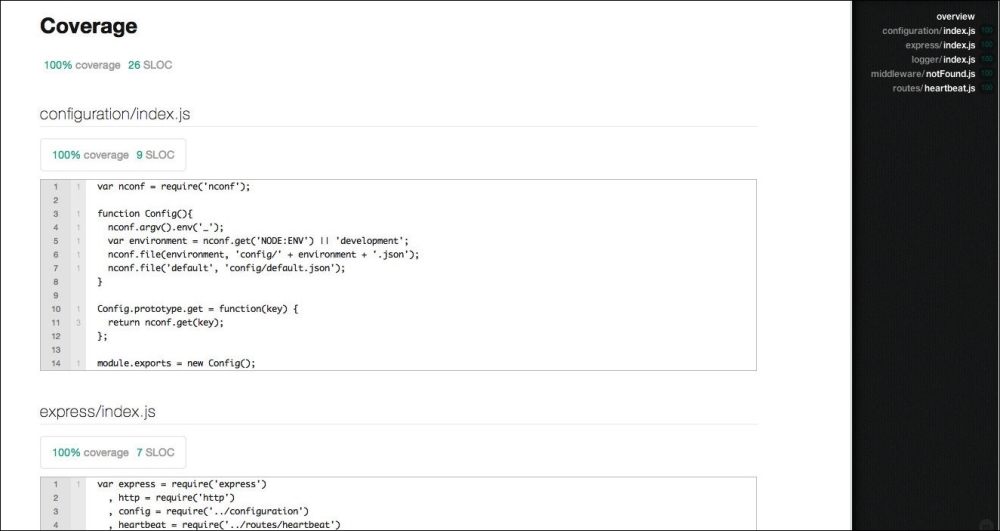 Nconf is a configuration tool that we will use to create hierarchical/environment configuration files for our application. Let's install Nconf:

The first thing we will do is to move the following hardcoded port number from our Express application into our configuration:

Let's write some configuration for our application. Add the following default configuration to ./config/default.json; this will be shared amongst all environments:

Let's change our Express server ./lib/express/index.js so that it reads express:port from configuration:

Express supports multiple options for application structure. Extracting elements of an Express application into separate files is one option; a good candidate for this is routes.

Let's extract our route heartbeat into ./lib/routes/heartbeat.js; the following listing simply exports the route as a function called index:

Let's make a change to our Express server and remove the anonymous function we pass to app.get for our route and replace it with a call to the function in the following listing. We import the route heartbeat and pass in a callback function, heartbeat.index:

In order to handle a 404 Not Found response, let's add a 404 not found middleware. Let's write a test, ./test/heartbeat.js; the content type returned should be JSON and the status code expected should be 404 Not Found:

Now, add the following middleware to ./lib/middleware/notFound.js. Here we export a function called index and call res.json, which returns a 404 status code and the message Not Found. The next parameter is not called as our 404 middleware ends the request by returning a response. Calling next would call the next middleware in our Express stack; we do not have any more middleware due to this, it's customary to add error middleware and 404 middleware as the last middleware in your server:

Now add the 404 not found middleware to ./lib/express/index.js:

Express comes with a logger middleware via Connect; it's very useful for debugging an Express application. Let's add it to our Express server ./lib/express/index.js:

The immediate option will write a log line on request instead of on response. The dev option provides concise output colored by the response status. The logger middleware is placed high in the Express stack in order to log all requests.

We will now add logging to our application using Winston; let's install Winston:

The 404 middleware will need to log 404 not found, so let's create a simple logger module, ./lib/logger/index.js; the details of our logger will be configured with Nconf. We import Winston and the configuration modules. We define our Logger function, which constructs and returns a file logger—winston.transports.File—that we configure using values from our config. We default the loggers maximum size to 1 MB, with a maximum of three rotating files. We instantiate the Logger function, returning it as a singleton.

Let's add the Logger configuration details to our config files ./config/development.json and ./config/test.json:

Let's alter the ./lib/middleware/notFound.js middleware to log errors. We import our logger and log an error message via logger when a 404 Not Found response is thrown:

Grunt is a task runner and a great way to automate your node projects. Let's add a simple grunt script to our project in order to automate running tests and code coverage. Let's install Grunt and Grunt CLI:

The grunt-cafe-mocha is a grunt module for running mocha; this module will also allow us to automate code coverage reports:

The grunt-jscoverage simply generates an instrumented version of our source code and writes it to ./lib-cov:

The grunt-env allows you to set the current node environment, NODE_ENV:

Let's create a grunt file ./gruntfile.js. We load the grunt modules we just installed, and grunt.initConfig contains a configuration for each grunt module:

The configuration for cafemocha contains two sections; one for running our tests and one for generating a code coverage report. In order to run our tests from grunt, execute the following command:

The following line registers a task that sets the environment using env and runs both the jscoverage and cafemocha:coverage tasks in sequence:

In order to run our coverage from grunt, execute the following command:

This command will generate the coverage report as described earlier.

We have put in place a fairly solid framework for developing our Vision project; we have implemented a simple feature, heartbeat, which when visited, simply informs us whether our Express server is up and running. We have automated various development tasks, such as running tests and creating code coverage reports. We also have in place some logging using Winston. In the next chapter, we will implement a web API. 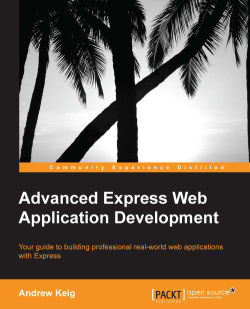