Windows PowerShell is a task-based command-line shell and is gaining popularity day-by-day. Using PowerShell to manage the Active Directory environment not only saves time for the system administrator, but end users also benefit as they see their requests being fulfilled in very little time.

The book starts with an overview of the components, software, and modules required to manage Active Directory with PowerShell. It then moves on to help you create and manage users, computer accounts, and group policies with simple examples to automate daily tasks. Furthermore, it covers topics such as GPOs, DNS Server/Client, DFS-N, and DFS-R automation. It also demonstrates how to automate some advanced operations so that they can be scripted to perform in a faster and more efficient way. By the end of this book, you will be competent enough to use PowerShell to manage your Active Directory environment and will gain all the required knowledge to automate your daily operations.

To see how many cmdlets a module has, use the following commands once you have the Active Directory PowerShell module installed using the approach that is discussed later in this chapter:

First, import the Active Directory module in a PowerShell window. You will see a progress bar as shown in the following screenshot:

Once the module is imported, then you can run the following command to verify how many cmdlets Active Directory module has:

As you can see in the following screenshot, there are 147 cmdlets available in Active Directory module on a Windows Server 2012 R2 server:

There are three ways available to manage Active Directory using PowerShell. Each of these has its own advantages and operating environments:

Let's dig into each of these and understand a bit more in terms of how to install, configure, and use them.

You can read more about ADWS and gateway service functionality at http://technet.microsoft.com/en-us/library/dd391908(v=ws.10).aspx

As mentioned earlier, if you promote a Windows Server 2008 R2 or later operating system to domain controller, there is no need to install this module explicitly. It comes with the domain controller installation process.

First, download the RSAT package from one of the following links based on your operating system and install it with administrative privileges:

To install Active Directory module on Windows Server 2008, Windows Server 2008 R2, and Windows Server 2012 member servers, there is no need to install additional components. They are already part of the available features and it's just a matter of adding the feature to the operating system. This can be done using PowerShell or a regular GUI approach.

If you want to enable this feature using PowerShell in the aforementioned server operating systems, then use the following commands:

The RSAT package comes with the build on Windows Server 2008 R2 and Windows Server 2012. No need to install RSAT explicitly. The Server Manager PowerShell module in these operating systems contains the cmdlet, Add-WindowsFeature, which is used for installing features. In this case, we are installing Active Directory module for the Windows PowerShell feature in the AD DS and AD LDS tools.

If you want to perform this installation on remote servers, you can use the PSRemoting feature in PowerShell. This is the best approach if you want to deploy Active Directory module on all your servers in your environment. 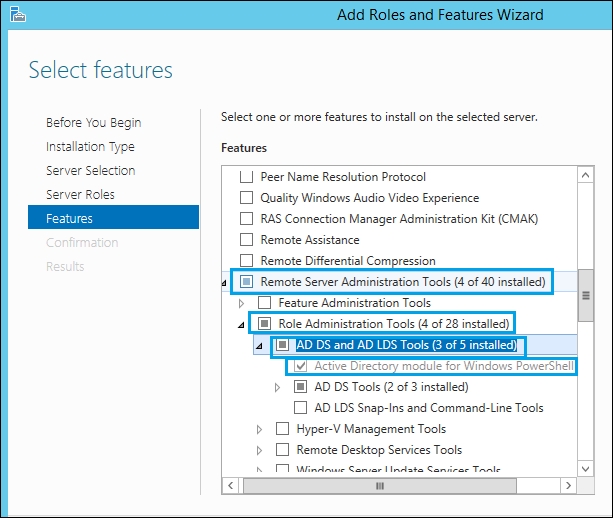 After installation, you can verify the functionality of Active Directory module by importing it and running a few basic cmdlets. A cmdlet is a simple command that is used in the Windows PowerShell environment. You can read more about cmdlets at http://msdn.microsoft.com/en-us/library/ms714395(v=vs.85).aspx.

Your installation is successful if you see your domain information after running the Get-ADDomain cmdlet, as shown in the following:

One good thing about PowerShell is you can avoid the hassle of typing the whole command in the PowerShell window by using the Tab Expansion feature. You can type part of the command and press the Tab key to autocomplete it. If there are multiple commands (or cmdlets) that match the string you typed, then use Tab multiple times to select the one you need. It's pretty handy because some of the cmdlets in Active Directory are considerably long and it can get really frustrating to type them. Refer to the TechNet page at http://technet.microsoft.com/en-us/library/dd315316.aspx in order to understand how you can use this feature of PowerShell.

Previously, you learned that Microsoft Active Directory (MS AD) module was introduced with Windows Server 2008 R2. So, how did system administrators manage their Active Directory environments before the introduction of MS AD module? Quest Active Directory PowerShell cmdlets were present at that time to simplify AD operations. This Quest module has a bunch of cmdlets to perform various operations in Active Directory. Even after Microsoft released Active Directory module, many people still use Quest AD cmdlets because of its simplicity and the wide variety of management options it provides.

Quest software (now acquired by Dell) allows you to download ActiveRoles Management Shell for free and you can download a copy from https://support.software.dell.com/download-install-detail/5024645. You will find two versions of Quest AD Management Shell in the download page. Be sure to download the latest one: v1.6.0.

While trying to install the MSI, you might get a prompt saying Microsoft .NET Framework 3.5 Service Pack 1 or later is required. You will experience this even if you have .NET framework 4.0 installed on your computer. It seems the MSI is specifically looking for .NET 3.5 SP1. So, ensure that you have .NET Framework 3.5 SP1 installed before you start installing the Quest AD management Shell MSI. You might want to refer to the TechNet article at http://technet.microsoft.com/en-us/library/dn482071.aspx to understand NET Framework 3.5 installation process on Windows Server 2012 R2.

After the completion of MSI, you can start using this module in two ways. You can either search in Program Files for the application with the name ActiveRoles Management Shell for Active Directory or you can add the Quest snap-in into the regular PowerShell window.

The Quest AD Snap-in can be added to an existing PowerShell window using the following command:

After adding the snap-in, you can list the cmdlets provided by this snap-in using the following command:

Get-Command is the cmdlet used to list cmdlets or functions inside a given module or snap-in after importing them. The version (v1.6.0) of Quest AD Shell has 95 cmdlets. Unlike Microsoft Active Directory module, the number of cmdlets will not change from one operating system to another in Quest AD Shell. The list of cmdlets is the same irrespective of the operating system where the tool is installed.

Open a new PowerShell window and try the following commands. The Get-QADRootDSE cmdlet should return your current domain information. All the Quest AD Shell cmdlets will have the word QAD prefixed to the noun:

Using the Native method of PowerShell

Both Microsoft AD module and Quest AD module have a dependency and require additional software or components installed. If your environment cannot afford the installation of new components, then you are left with only one option to manage Active Directory using native PowerShell, which uses .NET classes. This doesn't require any extra components to be installed and the only thing required is .NET, which is present by default on any Windows operating system.

To query all computers in the current domain, use a query given in the following command:

The example shown in the following screenshot might look simple but, as you need to do more with the native method approach, the complexity of the code will increase. Also, you will find less help from the community when querying Active Directory using the native method. Because of these reasons, Microsoft AD module or Quest module are preferred for easy Active Directory operations. Use this approach only if you have no other option.

In this chapter, you learned about the tools that the PowerShell module requires for managing Active Directory and how to get started with them. It is necessary to install these tools and modules in your environment to facilitate Active Directory operations using PowerShell.

Having these tools and modules in working condition is essential for practicing with the code samples provided throughout this book.

In the next chapter, you will learn in detail about how to manage user and computer Active Directory objects using PowerShell.

Read more Unlock this book with a 7 day free trial.
About the Author
A very useful book for Administrators. 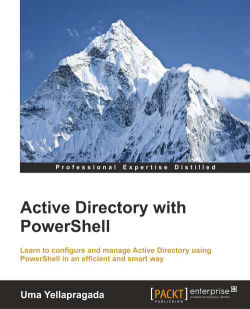